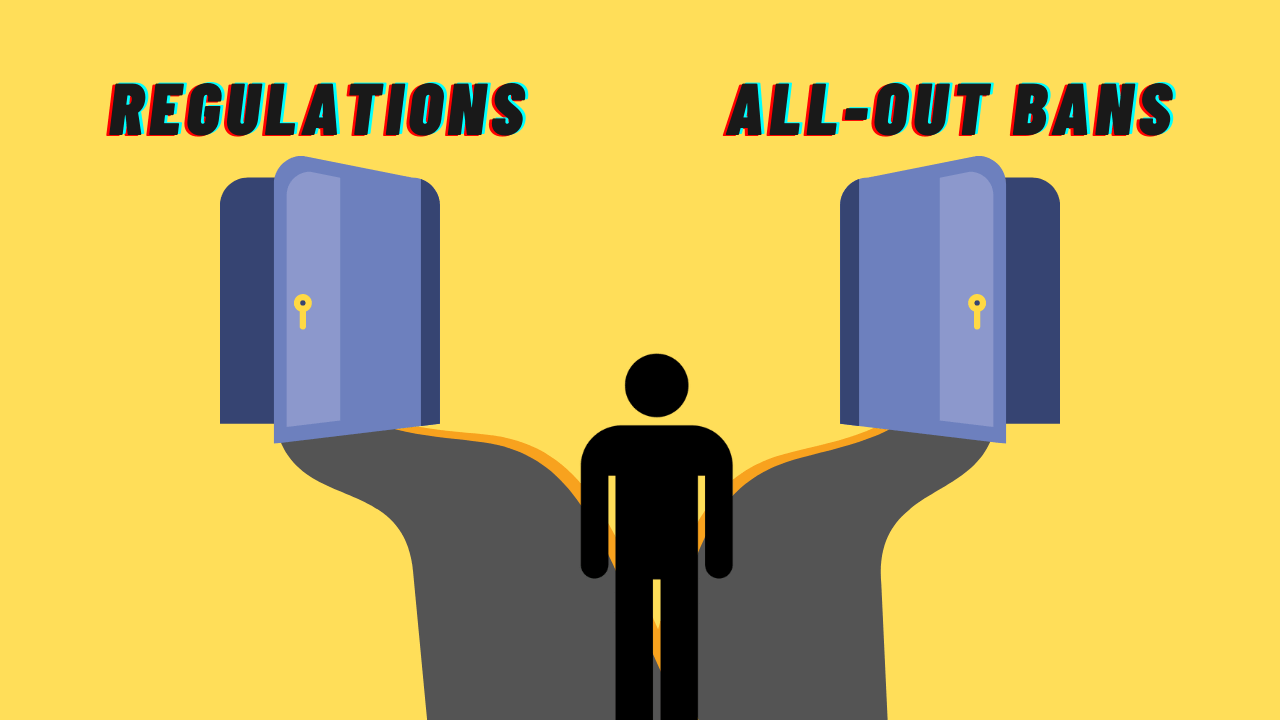 While most of our activities in the physical world have been paused, the digital ecosystem continues to carry forward at an accelerated pace. From major investments, to concerns on surveillance, there suddenly seems to be way too much going on in the digital world! It makes one wonder what a post-COVID era might look like considering all these rapid developments. Specifically, would India’s technological leverage in the international community change? A great starting point to answer this question, would be examining the implications of India’s recent interim order to block 59 Chinese applications. In light of the order, what should be India’s next move if it wishes to keep up the momentum, and emerge as a global leader of the digital frontier?

The government’s acknowledgement of data protection as a matter of national security is a hallmark in itself. However, acknowledgement and practice are two very different things: especially considering that the order has exposed the dismal state of data privacy and security regulations in the country.

Take Section 69A of the IT Act, for example. Although this is the provision that made the ban possible, it was never meant to enforce data protection compliance. As pointed out by Asheeta Regidi, “it is essentially a content regulation tool, designed to deal with offending content via blocking access to it.”  Moreover, Apar Gupta from the IFF highlights that the provision is meant to deal with specific complaints with individual apps; not a group of applications. To be in compliance, “separate, evidence-based evaluations” would be required for each complaint.

1. The basis of this statement are media reports which carry a press release. This is not a legal order issued under Section 69A. Our first ask is transparency and disclosure.

Now, it’s true that these apps might be a genuine threat to national security, and the government might have followed the procedures laid out in Section 69A to a T. Still, the devil lies in the details, and those details are only present in the original order yet to be made available to the public. To be fair, the government is not obligated to release the order, owing to a strict confidentiality clause in 69A. However, an optimist would be inclined to believe that such an explicit acknowledgement for data protection can and should definitely lead to more transparency from the State–which perhaps can even extend to disclosing the original order.

Nevertheless, concerns regarding data protection are legitimate. However, our current regulatory processes aren’t equipped to handle such threats. The government’s position today can have major implications on the way we deal with data in the future—will the interim ban set a dangerous precedent of all-out bans (usually, meant to be the last resort)? Or, will it push the government towards a fast-tracked, transparent, and robust (?) data protection framework (read: the much delayed Personal Data Protection Bill)? The answers to these questions could signal India’s position in future global technology discourses.

Protectionism of the Indian App Market

Matt Sheehan exposes the blatant irony in the technology rivalry between the US and China—”…much of it isn’t taking place in either country. Instead, it plays out in dozens of developing countries around the world where American and Chinese technology companies compete to win over what they call ‘the next billion users’.”

It’s no secret that the Indian app market has been inundated by both Chinese and US applications. However, the sheer pace with which Chinese apps are increasing in popularity is quite telling. Just five years ago in 2015, only three of the top ten most downloaded apps in the Indian market were Chinese. A few years later, in 2019, this number rose to six, with TikTok taking the lead!

In light of this fierce, external competition for the ‘next billion users’, could this interim ban be seen as a form of protectionism for the Indian app market? In other words, a strategy to diminish extraneous competition, while accelerating our domestic capacity (and business) in the app domain?

Well, for the moment this seems likely. Days after the interim ban, Narendra Modi announced the ‘Digital India Atmanirbhar Bharat Innovation Challenge’ “to encourage Indian application developers and innovators” with the mantra, “to Make in India for India and the World.” Moreover, during a virtual conference, Union Minister Ravi Shankar Prasad stated that India’s dependency on “foreign apps which have all agenda [sic] for a variety of reasons must stop.” While speaking about the interim ban, he acknowledged that this “is a great opportunity for goods and apps made by Indians,” and requested NASSCOM’s Debjani Ghosh and Infosys’ Nandan Nilekani to encourage organisations and individuals developing Indian alternatives.

It’s definitely refreshing to see the State take such significant steps to encourage domestic app innovation and entrepreneurship. Yet, the timing of these statements suggests that this isn’t happening in isolation. Rather, the fostering of innovation—which should be a standard policy directive for the government regardless of geopolitical affairs—is now seemingly being met through the protectionism of the domestic app market.

What could be the implications of this kind of protectionism? Well, it might be too early to speculate, given that it is directly dependent on how the world interprets the interim ban. Will it be seen only as a one-off instance of ‘selective protectionism’ instigated by China’s provocations? Or, will it be viewed adversarially—as the first wave of ‘digital protectionism’ that could include other apps from across the globe? And could this eventually lead to a general sense of targeted economic nationalism?

For all we know, this protectionism could accelerate the quality, quantity, and scale of domestic applications, without any retaliation from foreign bodies. Even then, going back to my previous argument, such growth could be rendered meaningless without enforcing necessary precautions, i.e., data protection regulations.  Sure, the country of origin skews the level of threat. However, any and every app that threatens citizens’ data privacy and security is dangerous to an extent, be it domestic or foreign. Hence, such protectionism needs to be met with swift and innovative data protection regulations.

Looking at the larger digital context of the international domain, Pratap Bhanu Mehta points out that, “We are at a transformative moment where almost all the rules of the international order are potentially up for renegotiation, from trade to cybersecurity, from the environment to pandemic risks.” Keeping this in mind, could the interim ban be India’s step towards dictating the re-establishment of the rules of the global digital frontier, a space that has until now been largely occupied by the US and China? The answer lies in how the government decides to proceed further.

If national security based on citizens’ data is the primary motive for the ban, then as aptly pointed out by Dipayan Ghosh, it could potentially dispel the “myth of the ‘China Bogeyman’.” This means that the usual rhetoric of US tech giants opposing regulation, over the fear of reduced competitiveness, and a subsequent Chinese takeover would fall flat. Why? Because India’s step could indicate a global willingness to forgo capitalistic gains sought through any and all unregulated and invasive applications, whether Chinese or not. In effect, this might coerce global organisations, including those headquartered in the Silicon Valley, to embrace local, national, and international regulations if they want to tap into the ‘next billion users’.

This provides India with an unparalleled opportunity to emerge as a bastion of democratic technology legislations, and to draft the ‘rules’ governing the global digital ecosystem. However, there is a vital caveat. To realize this golden opportunity, India’s next step should be to prioritise a transparent, accountable, and consumer-centric data protection framework, that when coupled with others like the GDPR, could redefine the way global data (maybe even beyond personal data) is handled and protected.

For example, a significant measure in this regard would be how India chooses to define national security in the digital domain. As Apar Gupta says with regards to India’s interim ban, “Any kind of public policy response which is premised on grounds of national security needs to emerge from well-defined criteria, which seems to be absent here.” The whole world is patiently waiting for India’s next move; will it emerge as a role model for regulation while maintaining “open democratic standards of internet policy”? Or will it let this opportunity go to waste?

On the other hand, if retaliation is the primary motive—in a sense, to translate China’s physical aggression at the border into retaliation on the digital battlefield— then there is little hope for consumer-centric regulation. Instead, we could expect more such waves of China-specific interventions. In this case, the pertinent questions change: Is this ‘digital strike’ commensurate with the brutal attack carried out by Chinese armed forces that left twenty Indian soldiers martyred? Could this lead to a dramatic fall in China’s soft power via digital platforms? What are the short and long term economic impacts of the ban on China? Should we expect retaliation from China, especially in the area of trade? If so, how would India be impacted? To be honest, none of these questions have simple answers. However, one thing is for certain—if India consciously adopts solely China-specific policies as its next course of action, it misses out on the opportunity to become a global leader for democratic technologies.

All three perspectives—data privacy & security, protectionism of the Indian digital market, and geopolitical strategy—indicate that India has the potential to change the status quo of the global digital ecosystem. For this to happen though, all signs point towards a quick, transparent, accountable, and consumer-centric data protection framework as India’s next best course of action. Will India take up this opportunity? Well, that remains to be seen.