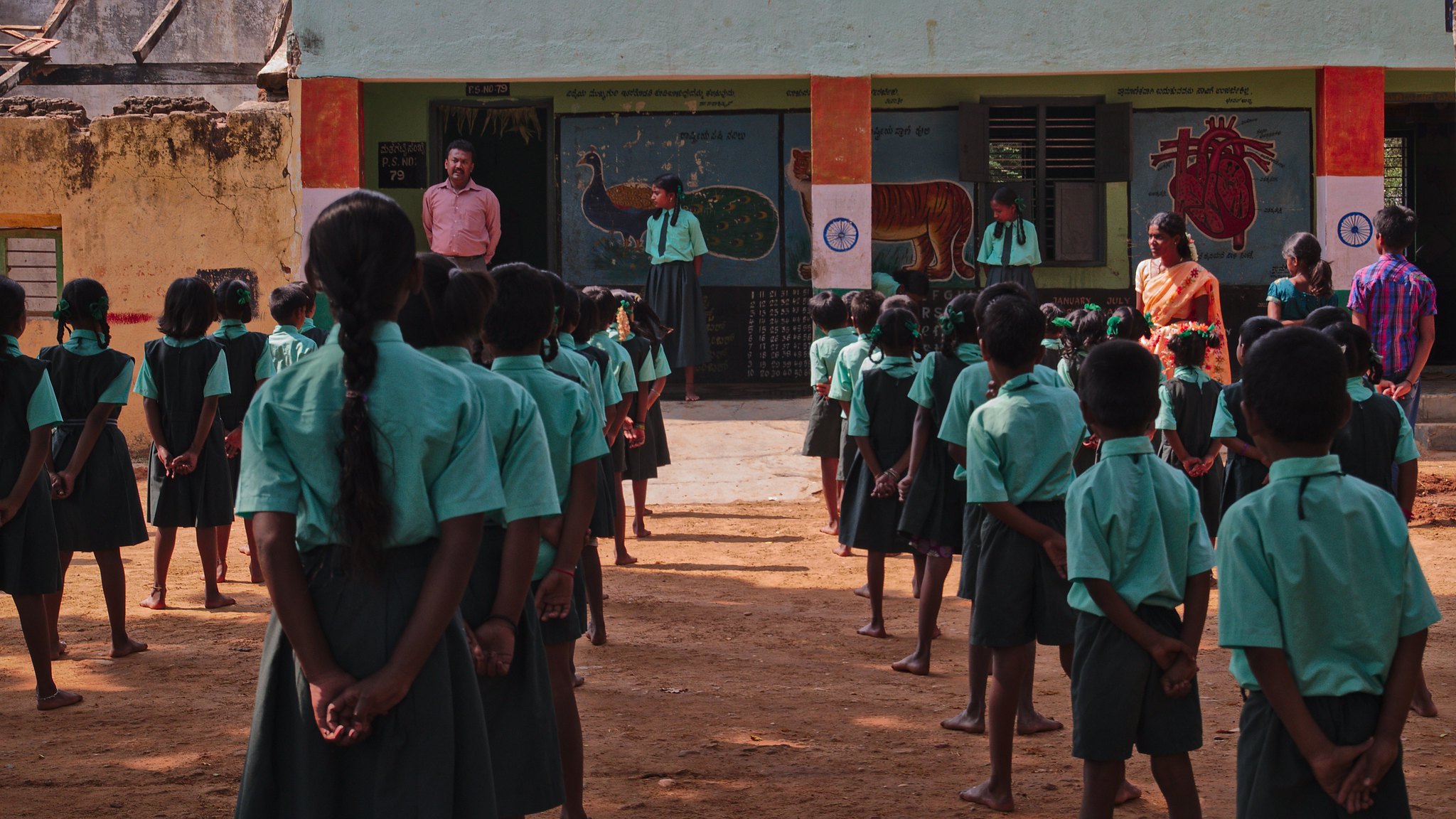 “I remember how much I used to love wearing my uniform as a kid. But when I got older, I started to feel more and more uncomfortable in it. Looking back, I realize it’s probably because of how much other people cared about how I looked in it, and how much effort I had to put into looking perfect to my friends, teachers, parents.” – Ritika*, an alumnus from a private school in Bengaluru.

“If you ask me, students are happy to wear their uniforms as long as it makes them feel respected. If they feel that the uniform does not allow them to feel like themselves, if they are not respected while wearing it, they will want to wear something else that they think will get them that respect, whether it’s from their friends or their teachers.” – Guna*, a teacher at a private school in Bengaluru.

No matter what schools we all went to, the one thing we can all relate to as students is the importance given to school uniforms. Uniforms are provided to students in public and private schools across India, with the intention of uniting students under the banners of their schools, irrespective of their socio-economic background. However, despite being markers of homogeneity, uniforms, as they exist today, tend to carry implicit codes of differentiation–especially along the axis of gender.

The majority of Indian schools, public or private, have different uniform sets for boys and girls. By extension, there is also a difference in how students are expected to present themselves in this gendered uniform, codified in the ‘dress code’.

How do dress codes operate?

Although the nature and extent of dress codes vary across different schools, an underlying constant is creating a separation between ‘boys’ and ‘girls’. More specifically, there is a distinction between the ‘masculine’ and ‘feminine’ norms that boys and girls are expected to respectively follow. Therefore, although the uniform intends to dissolve social differences in the classroom, dress coding becomes a tool to reinstate and conform to different social differences instead. It is well known that dress code policies across India tend to heavily police the dressing of girl students, from their hair down to their socks. Feminist authors have extensively written about the harmful effects that dress coding has on the mindset of the youth, in that it perpetuates misogynistic beliefs, sexualises schoolgirls, and reinforces the male gaze.

Parents in India are not happy about this school’s new dress code for girls. pic.twitter.com/5aWy9AcuvW

Yet, boys are not exempted from dress code policies either. In fact, former Teach for India fellows Shreya*, Esha*, and Khushi*, and a private school teacher, Guna*, recall that in their experience as teachers, they witnessed boys breaking the dress code more often, and being punished more harshly for it than girls were.

However, although the physical punishments for boys may be greater in school, one cannot deny that the extended social penalties for girls are equally harsh. Girls are not only subjected to the school dress codes, but also to the gender codes of their communities which are reemphasized through the school dress code.

Shreya, who taught at a government school in Hyderabad, recounts that the reason that the girls in her class were less likely to break the school dress code was because their parents took an active interest in their daughters’ dressing. “Sometimes the school would not be able to provide dupattas to all the students because of shortages in uniforms. But even the girls who didn’t have the school dupatta would come to school wearing one from their mothers’ set.” If not parents, teachers would step in. A student from a CBSE school in Bengaluru recalls that her teachers would often tell their students to wear a slip under their shirt.

Most of the time, such an attitude from parents and teachers is attributed to concern for the safety of their daughters/students, and protecting them from men. However, dress coding does not cease to exist in the absence of men, nor does it stop when students leave school. For example, in 2019 the administration at St. Francis College, an all-girls college in Hyderabad, came under fire for preventing women students from entering the college campus. Why? because their kurtis were shorter than the prescribed length, or had slits on the side, both of which were apparent hindrances to maintaining the standard of the college.  Hence, both the arguments–that dress codes are only created to shield women from the male gaze and that dress codes are a mere extension of the uniform–fall apart.

Hyderabad: Students of St. Francis College For Women protest against the new rule under which the students have been ordered to wear ‘kurtis’ below knee length while shorts, sleeveless or other similar dresses are banned in the campus. #Telangana pic.twitter.com/x6luaPuvRE

Instead, it is clear that dress coding girls in school often becomes synonymous with blocking any avenue to outrightly ‘flaunt’ physical femininity (which is immediately sexualised), and instead channeling girls towards ideas of modesty, decency, and submissiveness.

What Effect Does Dress Coding Have On Students?

It is more likely then that girls are inclined to follow school dress codes because the schools’ expectations of how they should present themselves overlap with social expectations enforced by their families and communities. To violate a dress code in school also implies violating gendered social norms outside of it. And so, girls’ infringements of the dress code, if any, are usually with respect to their hairstyle, wearing makeup or nailpolish, and the size of their uniform–all of which are either unintentional, subtle, or reversible.

Conversely, teachers and students alike have observed that unlike girls, boys are more likely to intentionally break the dress code in an attempt to reject authority. However, boys also tend to be punished more severely for these infringements. This could take the form of authority figures calling them names, forcefully cutting their hair, or hitting them. Yet, despite these punishments, boys seem to take opportunities to break or find loopholes in the dress code in earnest.

In Esha’s school, “Boys are not allowed to wear jeans. So instead, they would get their trousers tailored in a way that it would taper off at the bottom to look like skinny-jeans.” Similarly, in Shreya’s school, “When boys are caught and punished for having their shirts tucked out, they would ensure to keep it tucked-in in front of the teacher but tuck it out again the moment they are out of sight.” According to teachers, boys relish breaking the dress code and presenting themselves as rebels against authority.

Are #schools aware of the issues that #queer students face (from rampant #bullying to queerphobic attitudes from teachers & administrators). And are there any that are attempting to course-correct?@chintan_connecthttps://t.co/0YaZD5qHUg

Interestingly, although boys revel in the glory of getting away with breaking dress codes, they feel that girls are not punished enough for similar infringements, such as wearing jewellery. Although breaking the dress code does not warrant the severe physical or verbal punishments inflicted on the boys, that their stance is not against the punishment itself, but against the lack of punishments for girls is telling. As Khushi says, “My students would not want to be punished for something as silly as having long hair. But the fact that they saw the girls not being punished for wearing earrings while they were punished for wearing studs was what made them feel that it was extremely unfair.”

This additionally illustrates the promotion of a crew-cut straitjacketed ideal masculine identity which represses any so-called ‘feminine’ tendency in boys. A lack of explanation for the same can also cause boys to internalise these ideals over time, and project them onto women without acknowledging the subtle social and moral-policing that goes into dress coding girls in schools and homes. Instead, they become another source of critique.

In any case, breaking the dress code for boys may often not take precedence over their academic performance or character–the same is largely untrue for girls. An alumna from a CBSE school recalls her teachers complaining more about her eyeliner than discussing her academic progress during a parent-teacher meeting. Similarly, Shloka*, a student from Coimbatore, says that in her school, girls were not allowed to participate in inter-school events if their dressing was not approved by the school.

So, how can we redress these issues? Studies have shown that unisex uniforms and agender dress codes have significantly changed the dynamic between boys and girls in the classroom. While there is a decrease in the number of infringements of the dress code itself, there is also an increase in the students’ confidence to express themselves. Khushi recounts that in her school, once the sports uniform was made unisex (track pants and a t-shirt for all students, instead of a churidaar for girls), students became more active on the playground, boys and girls were more interactive with one another, and girls tended to be more outspoken on the days they wore the sports uniform.

Additionally, when students are not dress coded in school, there is more solidarity between students to call out discrimination outside the classroom. Shankar*, a college student says “I did not realise the extent of dress coding until I joined college and we didn’t have to follow uniform policies anymore. Until then, I didn’t even notice how much girls dressed according to what other people wanted. I didn’t even notice that about myself.”

The school uniform can only truly play a uniting role among students if the dress code does not play a divisive role based on gender norms, physically and mentally. Furthermore, in allowing students to dress in ways that transcend norms of masculinity and femininity, especially in their adolescent years, students will be able to overcome significant insecurities, while learning about discipline and professionalism in an environment that does not enforce it through punishment and policing.