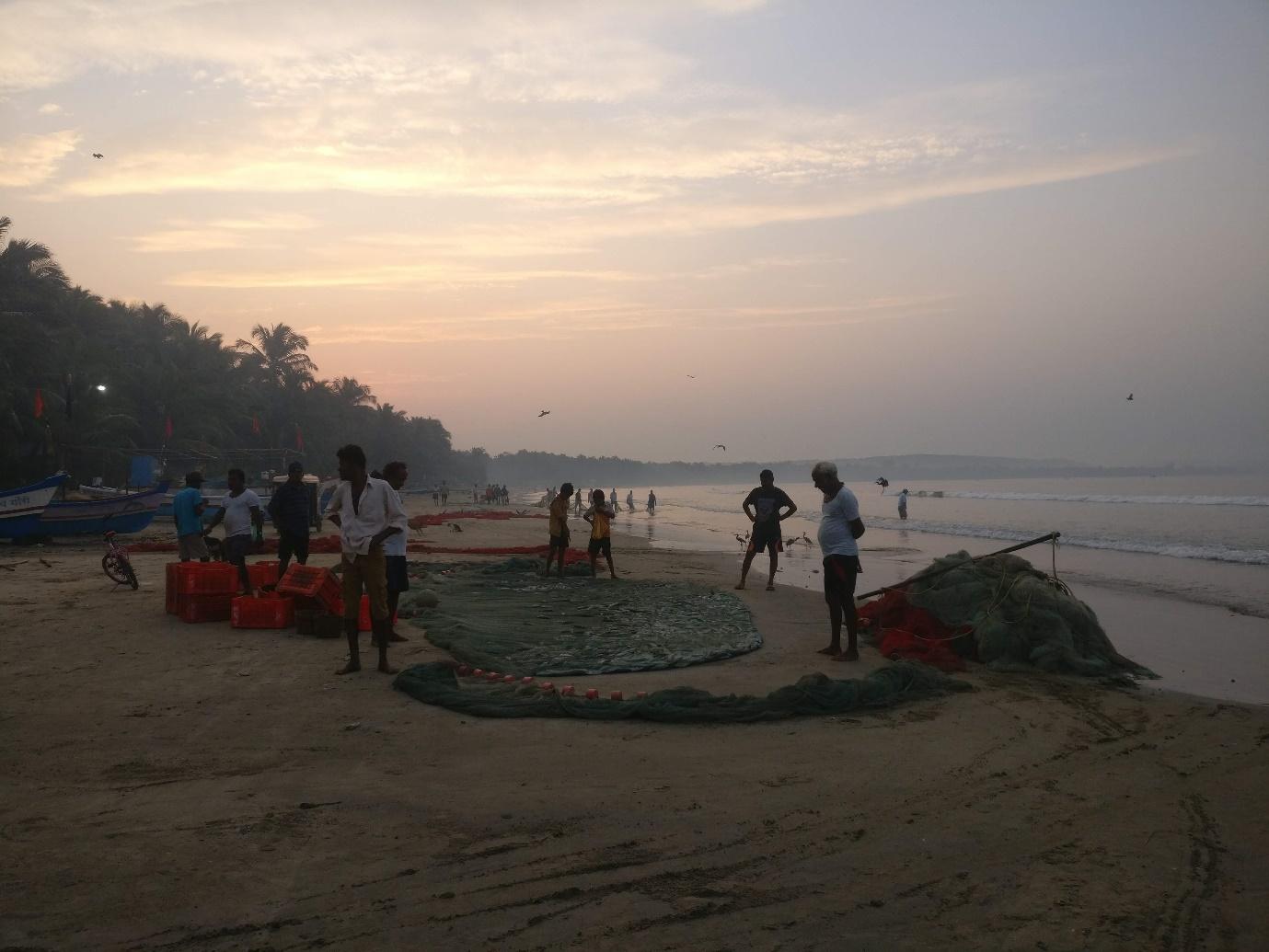 In early March 2020, I traveled to Malvan, where, for the past three years, I’ve been studying the fisheries in the region. Malvan is a small coastal town in Sindhudurg, the southernmost district of Maharashtra. I had planned to map the local fisheries using a collaborative approach with the fishers. After almost a year working in the lab and the office back in Bengaluru, I was hoping for some good interviews and a return to fieldwork. It was a much-needed change of pace. However, just like the fishers and traders of Malvan, us researchers also had no clue of what was to come in the following days and months. 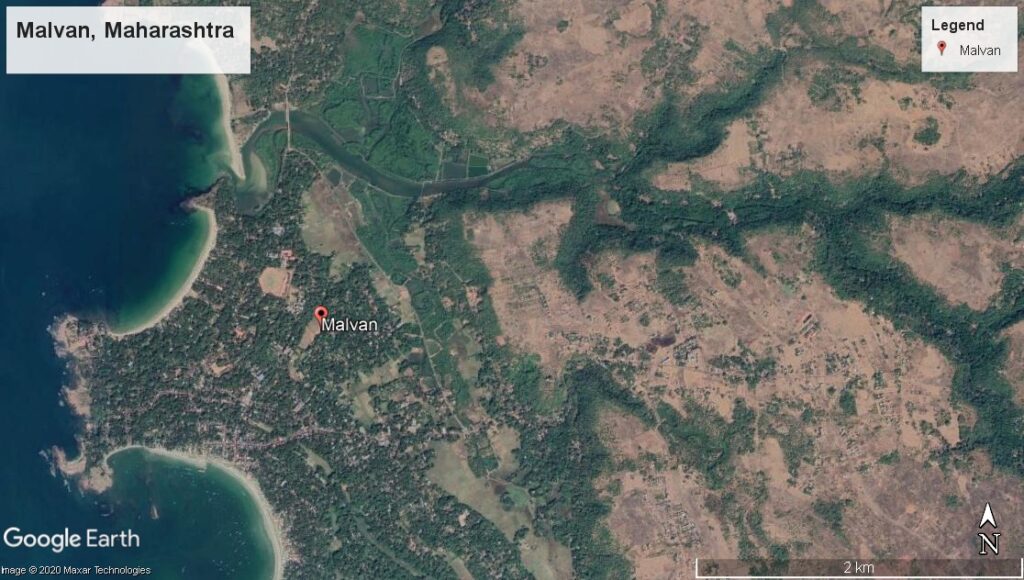 Little seemed to have changed in Malvan. The boats still plied every day, the markets were full of people, and the fish auctions still raged on, only with thinner crowds than I remembered. The tourists were flooding in for the start of the summer, and business was good for the local shacks, restaurants, and water sports. I was able to get some fieldwork done in the first couple of weeks in March. All the while we were a bit cut off from the news. So, when the lockdown did happen (as seemed inevitable later) it came as a bit of a surprise to all of us.

By mid–March, news of the looming COVID-19 pandemic had become part of everyday conversation. I remember a trawler captain coming up to me at the auction, after spending three days out at sea, and asking me  “He coronavirus kay ahe? Amhala kahi hou shakta ka?” (What’s this coronavirus? Will it affect us here in Malvan?) An elderly gentleman, a now-retired auctioneer, came up to me and said “Look at this!” handing me his smartphone. On it was a video of how a virus or contagion spreads from one person to another. “This is how it will get us!”

The announcements from the local bureaucracy had already started. A small tempo-rickshaw would travel around town, with a loudspeaker blaring the best practices to keep yourself protected from the virus–‘Wash your hands! Don’t touch your face! Avoid crowded places!’ We could hear these announcements in the background as we went about our usual business, completely ignorant of how they would soon be at the forefront of our everyday life. Our friends in the cities started posting about universities closing down, curfews at night, and increased police presence. Around us, the changes were different. The tourists trickled to a halt, while restaurants and tourism businesses shut shop. Suddenly, Malvan was much quieter during the day.

Then came the Janata curfew on the 22nd of March, which was a quiet affair here, at least on Dandi beach. If people were banging pots and pans, the houses were too far apart to hear anything. Soon after, the Tahsildar and the superintendent of police at Malvan came and met with the auctioneers and fishers present at the evening auction. They announced that the auction was now not feasible given the progression of the pandemic. And as abruptly as that, the auctions stopped. It was difficult to imagine Malvan without its daily auctions. But there it was.

The last of the tourists left just before the announcement of the lockdown. From the 25th of March, the beaches of Malvan, once bustling with activity through the day and even into the night, fell silent. The daily drone of jet skis and yelling tourists perched on top of them disappeared. The sounds of boat motors and rickshaws transporting fish could no longer be heard in the mornings. Around 70 medium-sized fishing trawlers, each with crews of 8–9 people lay dormant, docked in the natural harbour at Dandi beach.

Reports of tons of fish being thrown overboard due to a lack of demand started flooding in from major ports like Mumbai and Porbandar. Instagram, Facebook, and Twitter were flooded with images of migrant workers stranded across the country. In Malvan though, our concerns were more mundane. Supplies started to run low and it was unclear whether one would be able to procure simple things like rice or medicines. The narrow streets of the town centre were now blocked by police check posts. The atmosphere at the time was one of fear and uncertainty.

The weeks passed and as we approached mid-April, the first lockdown was almost at an end. “We won’t be affected,” said a fish trader who I ran into on the beach, with the owner of my favourite chai tapri walking alongside him. The two were out for a stroll because there wasn’t anything better to do. People would roam the beaches every evening; some would just sit at the periphery of their houses waving at people passing by. On some evenings, a group of local traders and fishers would get together for a match of cricket. The mother of a fisher who was playing cricket said, “The police come every evening at 6 pm and chase us away, we’ll get fined ₹1,000 for not wearing a mask.”

The start of the lockdown on the 25th of March saw a total curb on all fishing activities. During the second phase of the lockdown, however, which commenced from the 14th of April, restrictions on fishing were lifted; fishers were now allowed to go out, but had to market the catch themselves. The beach was vibrant with the bustling of small gillnet boats almost immediately. The catch? Fish flooded the market, but there was no one to buy. The price of fish had dropped significantly during the lockdown. For example, Pedi (lesser sardines) which sold at anywhere from ₹350 to ₹500 for a tokri (basket) at the morning auction in February, were now sold directly to the market at around ₹100. One often saw an army of fisherwomen neatly seated 6 feet apart from each other at the market, all the while watched over by an army of police, lest one got too close to the other.

Towards the end of April, which also marked the end of the second lockdown, people were a little bolder about leaving their houses. Sindhudurg was declared a green zone with only one case reported since COVID-19 had been declared a pandemic. Shops began to open, yet nothing seemed to approach anywhere close to normal. A gillnet fisher told me that most of his companions were going out to sea twice a day. “What else is there to do?” he remarked. The price of fish had fallen to around ₹50 per basket. “A man needs at least ₹300 per day to get by.”

The ice factory behind our field base in Malvan bustled with activity. At times, a long line of trucks waiting for ice would form. The trawlers had started to ply again regularly. Even the daily fish sale auctions had started along the coast, in places like Devgad and Vengurla, with Malvan soon to follow. An area on the beach designated by the authorities was flattened and lined with ropes in preparation for the auction. Auction agents lined up, six feet apart, every single one of them wearing a mask.

You May Also Like: The Shore Scene: PM-MSY’s Fisheries Development Promises Anything But Sabka Vikas

Malvan, like the rest of India and the world, would slowly inch towards its new normal. Could the scenes of crowded markets with people gathered around large baskets of fish now be a thing of the past? Aggregators and home deliveries seem to now be thriving in hubs like Mumbai and Bengaluru. The same may soon be the fate of life in Malvan too.

My teammates and I were able to make our way back home to Mumbai around mid–May. In early June, Cyclone Nisarga caused yet another disruption to what has been a season filled with misfortune for fishers on the west coast of India. Even as things slowly opened up from June 1st in ‘Unlock 1’ or ‘Mission Begin Again’, India’s fishers may find it increasingly difficult to adjust to their new normal.