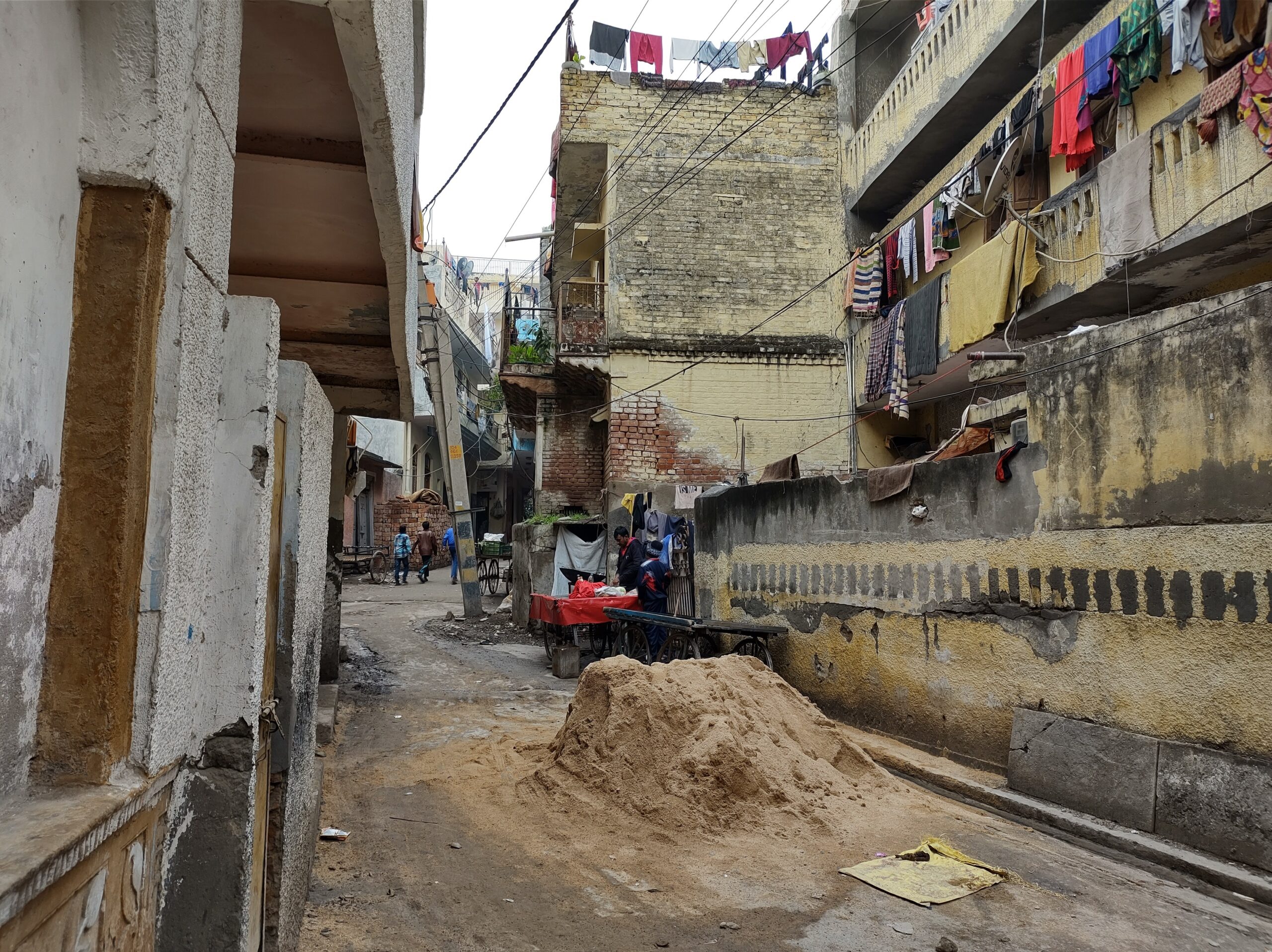 Ram Kumar Roja, 76 years of age, is standing on a ground, bordered by a few trees and a wall. This one acre piece of land did not always look like this. When Roja was younger, this was a pond. “As children, we used to bathe here. Cattle used to drink water from here. There was a dense forest around; deer and peacock-sightings were common,” he says, pointing towards the periphery of the erstwhile pond in the middle of Budhela, an urban village adjacent to South-West Delhi’s Vikaspuri. 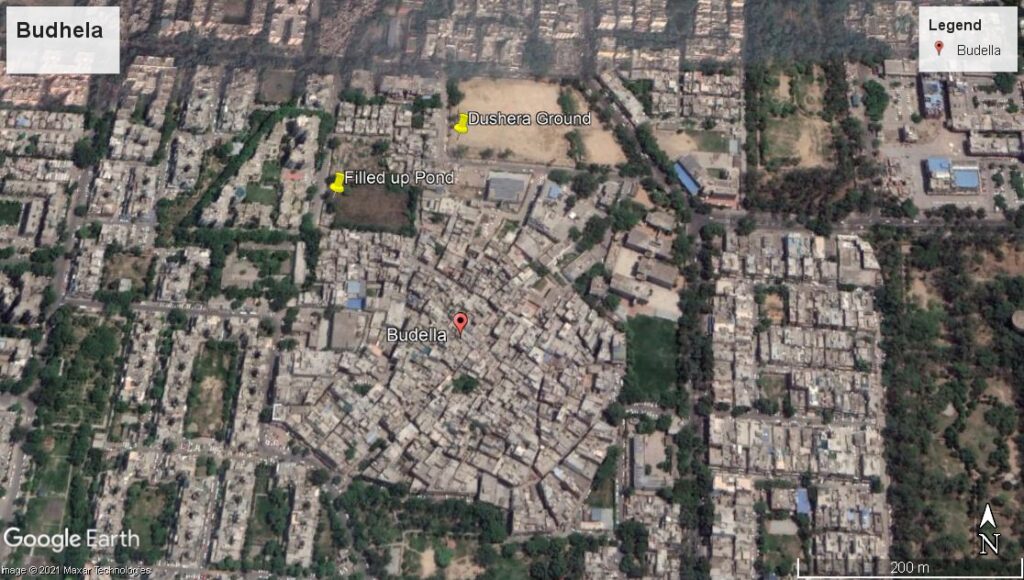 One one side of his pointed finger is a high-rise gated colony in Budhela. On the other side lies lower-income housing—small, closely built structures—where Roja owns a three-story home. “For a house that is barely 35-40 square feet, this filled up pond is a common area [in the colony], where we sit in the sun,” he says as children behind him play cricket. “And now, the Sahitya Kala Parishad [the cultural wing of Delhi Government] wants to construct a cultural centre here.”

Last month, Budhela’s residents protested against this development on the day of the site’s inauguration. This is not the only piece of commons in Budhela whose ownership has changed hands from being community-owned, to falling under the Delhi Development Authority’s (DDA) ambit. A 4.5-acre ground meant for recreation and play just a minute away from the pond is now rented out for functions for most of the year. Whether it is the ground or the pond, there is a common thread of disappointment binding the residents here—shamlaat, or the commons meant for the community’s use, are now being commodified and privatised by different authorities.

From Rural to Urban

Budhela is one of the 135 “urban villages” or “lal dora” villages in Delhi. Literally translating to “red thread,” the name lal dora is said to originate from the red-coloured markings on maps prepared by Delhi’s colonial government in the early 1900s which separated residential village areas from agricultural land. Delhi also has over 300 “rural villages” which are still engaged in primary sector work including agriculture, and do not come under the urban limits of the city.

Decades after independence, Delhi saw its first-ever Master Plan of 1961. It introduced a new concept—that of “urban villages”—and declared 20 erstwhile lal dora villages as such. The number of Delhi’s urban villages has grown over the years, with 33 villages declared to be urban in 2019.

Outlines for their planned development, which include allowing for construction in congruence with building bylaws, were listed only in the 2021 Master Plan for the city. In the meantime, whether in 1961 or 2019, once these areas came under urban limits, they had to follow the urban by-laws of construction. Amongst other provision, these by-laws limited the number of stories permitted to be built in a dwelling.

But in 1963, seeing the influx of post-partition refugees and their housing requirements, a notification was introduced by the Municipal Corporation of Delhi (MCD)—urban villages could be exempted from obtaining sanctioned building plans. Unplanned construction was quick to follow.

Budhela’s land acquisition document accessed by The Bastion shows that about 3,000 bighas of village land were acquired by the DDA in 1969 for the “planned development of the Delhi.” The document gives a glimpse of this village in the past, one that was rich in wells, ponds, trees, fields, and Persian wheels, a contrast to Budhela’s current cramped housing and lanes. Depending on different localities within the village, farmers in Budhela were compensated with anywhere between ₹700 per bigha to ₹2,000 per bigha, during the land acquisition process.

However, these compensation schemes did not reach all of Budhela’s residents. “We were agricultural labourers and worked on other land-owning farmer’s fields. Hence, we did not get any compensation,” says Roja, who identifies as a Harijan, a caste ascribed a lower status in the caste hierarchy. The land-owning farmers who received their one-time compensation were able to take up different livelihoods in the village. Many built houses and put them up for rent; instead of agriculture, today Budhela operates mostly on a rental economy.

The downside to this rapid construction and urbanisation is hard to miss. An expert committee constituted by the Union Ministry of Urban Development states it clearly in its 2007 report on lal dora villages: “It has not been possible to extend even the basic–most civic services like water-supply and sewage-disposal in the narrow twisting streets and haphazard layouts within Lal Dora in all the 135 urbanized villages as on date. Most of the dwelling units are inaccessible to ambulances and fire-tenders to attend to emergencies.”

“By the name of ‘urban’, what did the government do for us? They did not plan our village’s development. We had to struggle even to get the piped water we have now,” says Deepak Tyagi, president of the Budhela Residents Welfare Association.

Villages like Budhela are complex spaces, living between the blurred boundaries of urban and rural India. Residents too have mixed feelings about this development. Many have benefitted from the disorder by accessing the ‘urban’ through a metro station and private schools that have come up nearby the village. At the same time, they also mourn the loss of a past rural culture.

With no urban bylaws to follow till 2011 (after which another notification ceased such exceptions), this dense, unplanned concretisation quickly swallowed up most signs of rural-ness in Budhela, including commonly owned spaces like the park near Roja’s house.

A Loss of Commons

Of the roughly 3,000 bighas that were acquired in Budhela during the land acquisition process beginning in 1969, 323 bighas—roughly 10% of the total village land—were documented as “area under ownership of Gaon Sabha.” These were the common pastures, village ponds, and temples, and were open to all. But, when the DDA finished acquiring these spaces by 1972, they provided no compensation at all for these commons to Budhela. “The entire village was sold off for around ₹70 lakhs,” laments Paras Tyagi, co-founder of NGO CYCLE. Tyagi’s family has been living in Budhela for generations.

Most of the earlier commons are now encroached upon by people. Private schools, a police station, and residential quarters for the police have also been built upon them. “Commons are essential for a city’s health and well-being. But in many areas of Delhi, such as Shahdara in the east and Uttam Nagar in the west, the per capita open space is far below WHO norms [the WHO recommends 9 square metres of undeveloped open space per person],” says Anubhav Pradhan, a lecturer at the Indian Institute of Technology, Bhilai, who works on planning, land history, and rights in Delhi. These commons continue to inch closer to vanishing altogether, a fate shared by the pond at Budhela, that is now set to see a cultural centre.

Many neighbourhoods span many sqkms yet don’t have decent green spaces.

It’s possible to travel more than 10kms in Delhi NCR without seeing a tree! pic.twitter.com/G3foEip8h1

The Pond in Question

In 2002, DDA sold Budhela’s pond to the Sahitya Kala Parishad for building an “auditorium” for cultural events. As the first step back then, the Parishad filled the pond up, landscaping it to a levelled, open ground. “By then, the pond had become dirty since most of the sewage from the buildings here was being let out in the pond. We were bothered with the mosquitoes and flies, so we also didn’t object to the pond being filled up,” says Roja.

But, Tyagi puts forth an additional ecological question. “If our pond was dirty and polluted, why didn’t the government help us revive this pond? On the one hand, the Delhi government is promising water conservation through artificial lakes, but when Delhi already has traditional ponds, these should be revived.” For Budhela and the South-West district of Delhi that it falls in, these ponds and their ability to recharge groundwater can be of great benefit. After all, groundwater in this district is “semi-critical,” with water being found as deep as 10 to 20 feet below the ground.

In fact, in 2011, the Government of Delhi published an order staying any further filling up of ponds by any person or land owning agency. Instead, they suggested that the owners of such ponds could “avail the services of Delhi Jal Board to cleanse such ponds, wherever necessary.”

Yet, as of September 2019, the plan for the cultural centre on Budhela’s pond stands approved. With Deputy Chief Minister Manish Sisodia stating in 2019 that, “This [cultural centre] will not only [allow] the eminent artists to come to Delhi and perform but also the people of Delhi who love culture will get a space to showcase their talent.”

“What will we do with a cultural centre? The government should make a park here; at least we can put it to use,” says Roja. Dr. Pradhan resonates with Roja. “It is impossible to go back to how the village commons, the shamlaat, dotted Delhi’s hinterland up till even forty years ago. Creating open, public space in urban villages is a design imperative now, which planners and architects must co-create with people. Our focus must be to design spaces for inclusive, accessible interaction amongst people, in the form of parks, anganwadis, and community libraries.”

What could also help is integrating these urban villages into Delhi’s Master Plans. Between the 1970s and 1990s, “urban villages” and their integration was spoken of time and again in documents, but implementation never followed.

Last October, the DDA organised an online meeting for all the RWAs of Rural and Urban villages in Delhi. Tyagi attended it too, suggesting the creation of village-level development plans. “While Budhela has an RWA, most of the urban villages in Delhi don’t have one yet. There was a limited representation of villages like us.” While lal dora villages had a well-oiled system of panchayats for grievance redressal and decision making, these bodies were removed as and when villages were declared urban. For many such urban villages, the point of contact for grievances became the offices of the Municipal Corporation of Delhi.

You May Also Like: Are Residential Welfare Associations the Missing Key in Urban Governance Models?

“When we used to go to the MCD or the MLA with our complaints, it felt like we were subjects accessing a king and pleading for help. This has changed a bit since we made our RWA in 2019,” says Deepak. “Our representations have now put pressure on the MCD, and for cases like the pond and the commercialisation of our parks, we will go to court.”

The idea of a village—whether urban or rural—does not seem to fit into the “world-class city” that the DDA aims to create, which is possibly responsible for the neglect that these villages have been privy to all these years. As the city grows further, open expanses of lands are seen as prime areas which would benefit only from development of some sort, bereft of any intrinsic value. In fact, only 25% of Delhi’s population live in planned areas. For the rest, including those residing in urban villages, areas around them have grown without any development plans in place. “We grew up around shamlaat, whether they were temples or community-owned wells. Now with this cultural centre and the parking issues that will accompany them, we will not be able to come out of our houses!” says Roja.