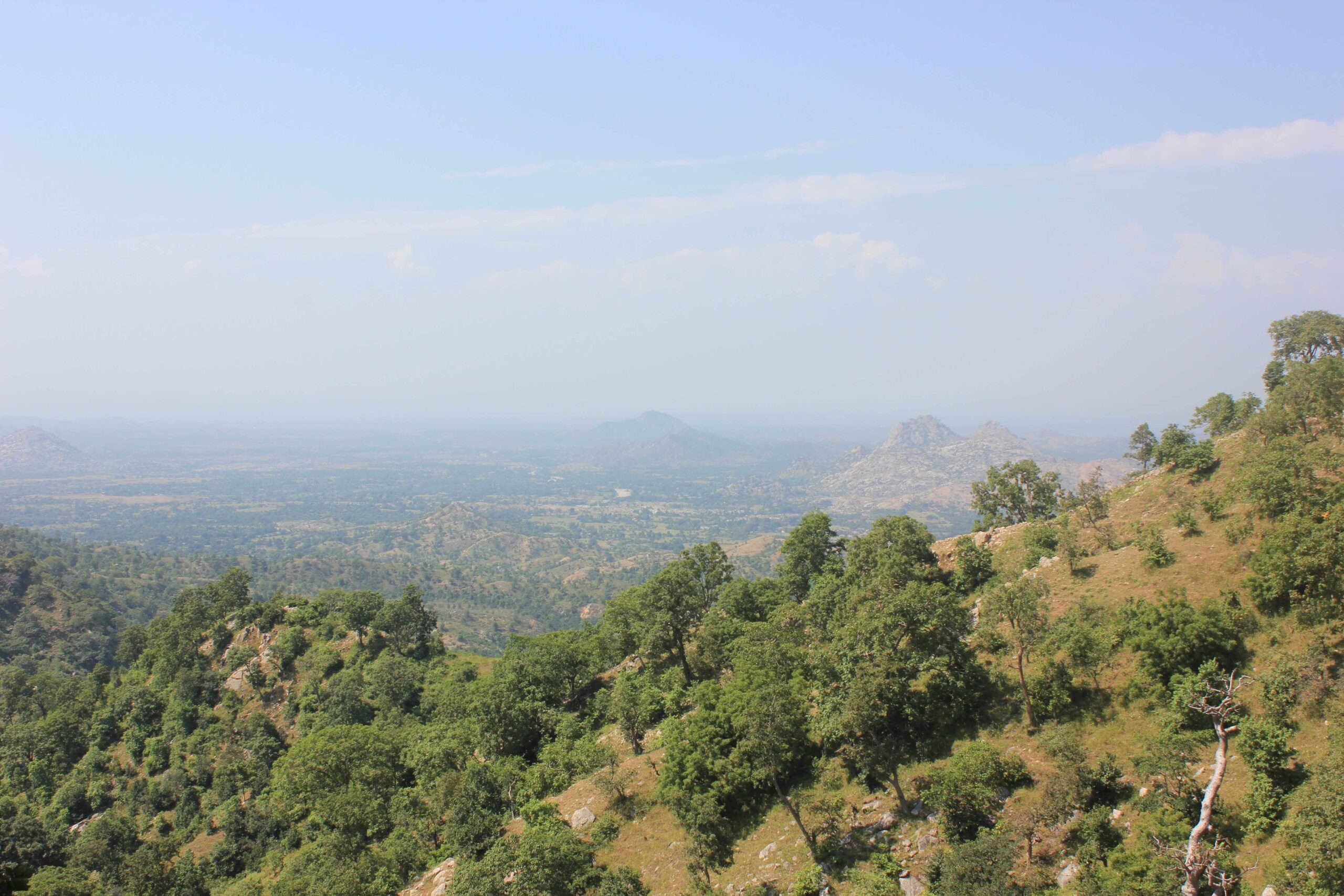 Read Part One: In Rajasthan, a Public Land Protection Cell is Removing Encroachments, But Challenges Abound

In December 2021, a crowd had gathered at the gauchar—or grazing land—of Rajasthan’s Nimbol village, each member brimming with anticipation. It was supposed to be the day when Pali district’s administration took on Nirmal Cement—a company that had been accused of encroaching upon the village’s gauchar by constructing an approach road through what was the common lands of the residents.

Bulldozers arrived, ready to demolish the encroachments. The Sub Divisional Magistrate, tehsildar, and armed security forces were also present at the location. And then, all of a sudden, everything changed. Just before the first bulldozer could begin work, one of the officials got a phone call. “We don’t know who was at the other end of the phone, but within a minute of the call, everyone—officials and security forces—turned back with their equipment. No encroachment was removed,” mentions Raju Ram, a resident of the same district and a block trainer with a local NGO. “Tabse mamla atka hua hai [Since then the matter has been stuck]. This is what happens when industrialists meet politics!” he laughs.

This event in Nimbol came after residents had initially filed a complaint against Nirmal Cement’s encroachment at the High Court. The case was then transferred to the Public Land Protection Cell—or PLPC—an institutional body under each district in Rajasthan to investigate matters of encroachments on commons, and resolve the issue within 90 days.

Across Rajasthan, cases of encroachments have been making their way to the Cells. While officers seem to be deliberating and investigating cases on hand, the final follow-through of the decisions—as Raju Ram also narrates—seems to be getting compromised, with unequal power dynamics being an inescapable factor.

Raju Ram is not alone in his observation of PLPC decisions being swayed by economically and politically powerful people. Gopiram Agarwal, a petitioner from Banswara district had observed, “yahan vidhayak ko raja banaya hua hai [political leaders like MLAs are treated as kings]” while expressing despair over the order they received from the PLPC regarding encroached lakes. “Such orders don’t just bring disappointment, but also discourage people from filing further complaints. Unhappy with decisions, people anyway end up challenging the orders at the High Court, a route that the Cell was supposed to be avoiding.”

In the same district, RTI information accessed by The Bastion shows how the Public Land Protection Cell dealt with a mining-related encroachment case. A resident of Aarjiya village filed a complaint to the PLPC in 2020 about 56.11 bighas (approximately 14 hectares) of a hill being used for “illegal mining.” When the Cell carried out the investigation through the tehsildar, they reported that “during the inspection, there was no one found practising mining and no person of the company was found on the mentioned site.” The Cell then marked the case as resolved.

The role of caste in governing common land cannot be ignored. In Jaitran, Pali district, villagers had about 315 bighas of commons available to graze, to collect wood and other non-timber forest produce. But about 100 bighas of this land was slowly being encroached to make a temple. “The temple was initiated by the Rajpurohit community here, who are considered to be of higher caste,” shares Raju Ram.

See, as far as the Cell is concerned, we know that it functions, and that officials meet and make decisions. But by the time an order comes down from the district level to the block level, it gets stuck in implementation due to pressure from industrialists or political influence. The PLPC’s decisions do not seem to be monitored closely. I would estimate that perhaps only 10% of [encroachment] cases [that reach the Pali PLPC] would have seen full and proper implementation on the ground.

Fearing the improbability of actual implementation of the Cell’s decisions, many residents also hesitate from approaching the Cell. “Darr ke marey nahi complaint karte, ki [badhey log] humein kya sunenge [People do not complain out of fear that the officials will not listen to them],” says Shivani Singh*, from a local NGO in Bhilwara who preferred to remain anonymous.

But this apprehension is not the only factor that is making people think twice before approaching the Cells; there exists another roadblock—lack of awareness about the existence and operation of Public Land Protection Cells.

Out of the 10 responses received by The Bastion via RTIs, each one indicated the fact that insufficient efforts have been made to inform the public regarding the existence of these Cells. This is despite the 2019 High Court order that created PLPCs mentioning that the “concerned District Collector should be required to periodically notify” the general public with information about the Cell.

RTIs seeking copies of any awareness material—pamphlets, advertisements, posters, letters—that informed the public about the Cell from District Collectors’ offices received responses saying information regarding this “is not available” or “not related to this department.” One exception was the offices in Udaipur district, who did not evade the question or their responsibility. They mentioned that “awareness was built through newspapers from time to time,” although no copies of the same were provided.

Then came information from Barmer district, which hinted toward a larger structural problem at hand that hinders awareness building, eventually increasing the hand of politics and power in governing commons. The office mentioned that after the formation of PLPC in 2019, “no budget has been allocated by the state government for awareness building”. Instead, the district office has been informing the public about the Cell through various “district level meetings” and “public consultations”, says their RTI response.

While many locals who could benefit from the Cell remain unaware of it, the Public Land Protection Cell presents a large scope for acting as a public institution that can effectively govern commons. This is particularly evident through RTI responses; of the 270 cases received by PLPCs, a majority—147 cases to be exact—came directly from the public. Just 50 had been transferred from the High Court. It shows that those who are aware of the Cells tend to approach them directly, instead of going to the High Court.

“Even while we [FES] have been working on commons in Rajasthan for years, we came to know about the Cell so much later,” says Shivani. “At the district level there are many committees that could address the issue of conflicts on commons, but these do not seem to have percolated to the block level.”

In Pali district, however, information about the functioning of these Cells has been communicated to the residents through initiatives led by Raju Ram. “During our campaigns, we work with the government wherever we can, but we have so far not seen any intimation of the PLPC coming directly from the district level officials,” Raju Ram shares. “To keep the conversation going on the encroachment issue, and have a platform for quick questions about the same, we also have a WhatsApp group where we discuss details about the Cell and share information as need be.”

Lives and livelihoods in Rajasthan stay interconnected via common lands, just like the resources stay entangled in a nexus of caste and class dynamics. As more and more cases of encroached commons reach Public Land Protection Cells, just and fair decisions will only be possible through efficiently functioning Cells that also find a way to see out the implementation of their own rulings. At the same time, for more people to benefit from this conflict resolution, timely and conscious awareness-building needs to be prioritised so that residents can go beyond the word-of-mouth publicity that these Cells seem to have so far. Perhaps then, communities can claim a larger stake in their commons, and ensure that no power dynamics of caste, or class—and certainly not a phone call like in the case of Nimbol’s encroachment removal—comes in the way of justice.

Read part one of The Bastion’s investigation on Public Land Protection Cells in Rajasthan here.

Featured image of restored commons in Gogunda, in Rajasthan’s Udaipur district taken in 2019 by Vaishnavi Rathore