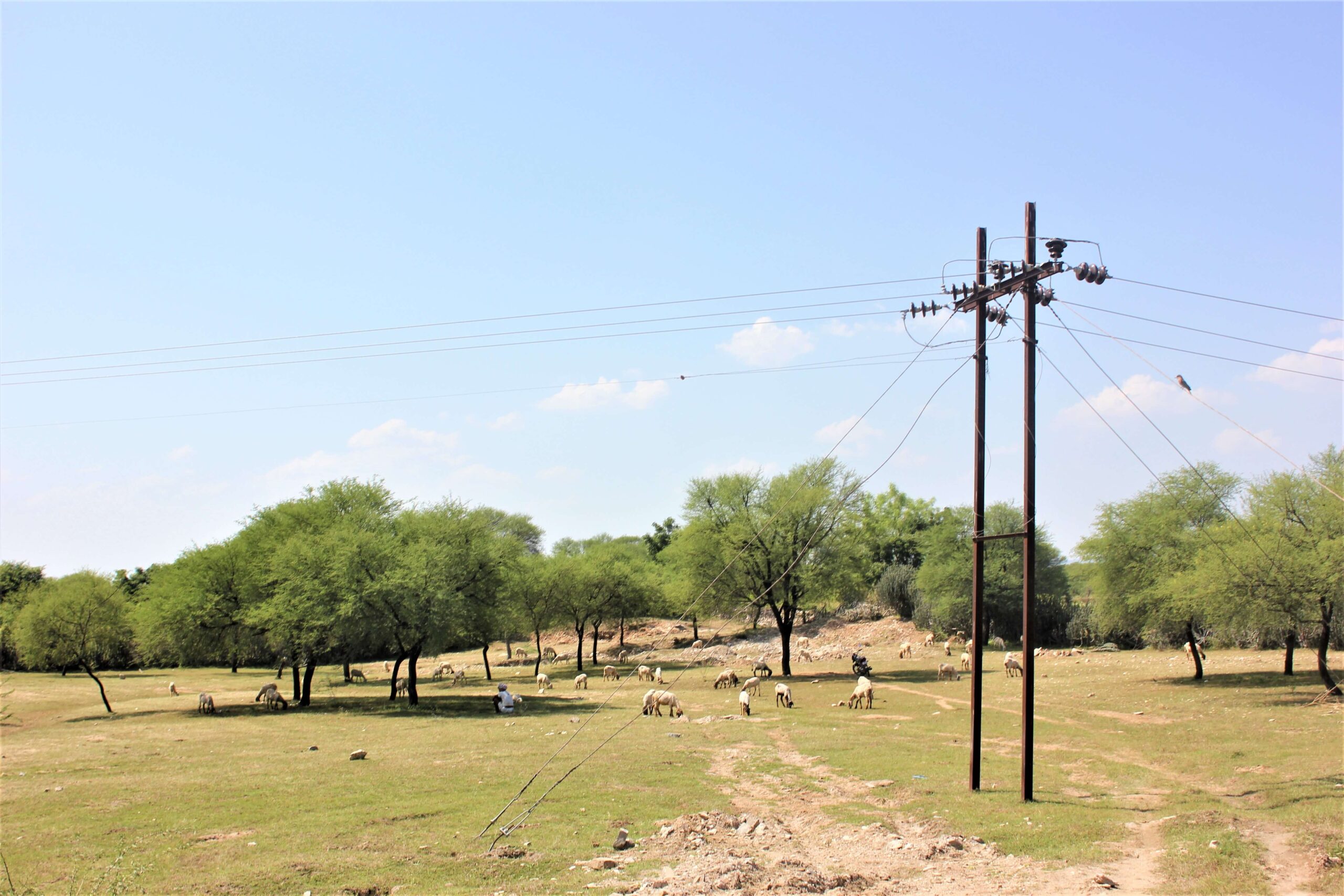 It was a chaotic January morning for the residents of Anandpur Kalu—a village in Rajasthan’s Pali district. Bulldozers lined up to remove a line of small shops that lay in a bus stand’s transit region. Behind the 50 feet of half-demolished shops peeped trees of kikar and babul, a hint of the ‘gauchar’ or the common grazing land of the village that they were accused of being illegally built upon.

“There were about 1800 bighas of this common land,” says Raju Ram, who resides close to Anandpur Kalu and is a block trainer with a local NGO. “This [common land] provided a large grazing area not only for the residents of Anandpur Kalu, but also for three to four villages nearby.” Drone footage from January 2022 captures the bulldozers at work, and the trees, shrubs, and water bodies punctuated with grazing cows, just metres away from the rubble.

“But as encroachments slowly began being built here, it restricted locals from using parts of the [common] land. That’s when the Sarpanch of the village went and filed a complaint to the Public Land Protection Cell, the hearing for which happened in 2021,” Raju Ram adds.

The Public Land Protection Cell, or PLPC, that Ram speaks of, originated through a Rajasthan High Court order passed in January 2019. The idea behind the formation of such a Cell was simple—to provide a “pan-Rajasthan solution” to the “ever persisting problem” of writ petitions filed against alleged encroachment on pasture lands and commons that the High Court found itself “inundated with.” Rajasthan’s Revenue Department then took to implementing the formation of these Cells through an April 2019 letter which was sent to all district collectors in the state.

Ranging from mining activity on a hill in Bhilwara, to encroachment on traditional water harvesting structures like agor and naadi in water-scarce Badmer, 270 cases have reached the PLPCs, as information accessed by The Bastion through the Right to Information shows. Most cases have been encroachments on pasture land, followed by a handful in forests, and water bodies. Of these, 129—less than half of the cases—have been resolved.

In this two-part series, The Bastion explores the efficiency of these unique Public Land Protection Cells through conversations with residents of various districts in Rajasthan, petitioners, NGO officials, and information accessed through RTIs. In Part 1, we explore why the commons in Rajasthan are valuable to communities, what kind of conflicts on such lands validated the need for a Cell as such to be formed, and how effective their functioning seems to be so far. In Part 2, we uncover that while the Cells have helped resolve some conflicts of grazing land, ponds, roads, and hills, the implementation of the final decision often came tied to more nuanced factors—local politics, caste, and class dynamics—that are intrinsically tied to land ownership in Rajasthan.

Common lands, or commons as they are often referred to, are lands that are collectively owned by several people, who can all stake a claim to them. Seen as a “customary right of rural communities,” such lands are bound by common rights and interests. In Rajasthan, commons make up about 40% of the land. These lands are abundant in speargrass, medicinal herbs like sharphunka and dwarf morning glory, as well as non-timber forest produce like the mahua flower that is fermented for local alcohol, varieties of gond or gum, and tendu leaves that are rolled into bidis.

“In Bhilwara [district in Rajasthan], we see different communities accessing commons for different uses,” says Shivani Singh*, a member of a local NGO from Bhilwara. “There are very few households that own more than 4 bighas of land. So, for the poorer households who rear smaller animals, commons and their pastures help sustain livelihoods. This includes agro-pastoralist communities like the Gujjars and Rabari. Such lands also become important for Kumhars, who need soil to make and sell clay pots and other products.”

As Shivani observes, easy access to such common resources implies extra income for communities. Studies show that commons can constitute 12-23% of the income of the rural poor. The physical accessibility of common lands also means that women and children do not have to venture far to gather resources. Shivani also reiterates this gendered aspect. “Think of a single woman-headed household, who may not have any land of her own and supports her family’s needs by rearing small ruminants like goat and sheep. For her, pasture lands would be essential to support her livelihood… Such groups are often more vulnerable than the rest and tend to rely heavily on commons and the produce they provide.”

Besides their economic importance, commons also hold a cultural value. Rajasthan is home to orans, or sacred groves, that predate Mughal India. Dedicated to gods and goddesses, village elders often have strict rules against tree logging and other private usages of the orans.

However, the open-to-all nature of common lands carries the unfortunate inevitability of conflicts over who can access them, for what purpose, and for how long.

Conflicts on Commons: Enter, the PLPC

Laws that govern commons are often ambiguous and may overlap; contemporary legal systems oversee such resources through numerous bodies at various administration levels. Unsurprisingly, this “results in physical boundaries of such common lands being continually subjected to contested priorities of various stakeholders,” as a 2021 article puts it.

Some NGOs like the Foundation for Ecological Security (FES) have worked to change this by facilitating village-level institutions to govern commons. In Rajasthan, over 16,00,000 hectares of land have been brought under community governance through such institutions that enable collective decision-making on rules to govern the commons. With this, apart from the economic and cultural security that accompany commons, ecological security has made headway, wherein communities that rely upon such lands also manage them in a sustainable manner. In fact, not only has such community ownership led to residents regaining the ownership of commons, but also reduced distress migration, rising water tables, and no more mining projects being announced on such commons.

Yet, the threat of encroachments has not been erased, as is evident from the cases that have reached PLPCs. “Before the formation of PLPCs, people would make these complaints first to the Gram Panchayat, after which a notice of the same is sent to the tehsildar and Sub-Divisional Magistrate,” Pushpa Jha, Field Coordinator with Rajasthan-based Jan Chetna Sansthan mentioned in an interview with The Bastion in April. “Then, the government and administration would together remove encroachments. The whole process would take about six months.” In the event that resolutions could not be made at the district level, the alternative was costlier and even more time-consuming—going to court.

The door for such encroachment cases to reach Courts was thrown open with a 2011 order of the Supreme Court; Jagpal Singh and Ors vs The State of Punjab was a landmark judgement where the bench impressed upon the sanctity of common lands as public utility resources, setting a precedent by gravely condoning encroachments and collusion between public officials and encroachers.

Finding itself flooded with such requests, the Rajasthan High Court ordered the creation of PLPCs in the 2019 case of Jagdish Prasad Meena and Ors. vs State of Raj And Ors. These district-level cells were to be formed under District Collectors and assisted by a Sub-Divisional Officer, or Tehsildar, or Naib Tehsildar, who would make field visits to oversee and verify the authenticity of such cases. Post that, demolitions or evictions would be carried out. The game changer here was the period when all of this action is supposed to occur within—90 days. By bypassing lawyers’ hefty fees, legal drafting, and endless delays in court, Public Land Protection Cells were hailed as the solution to a “persisting” problem.

So the question is, how have they fared so far?

In 2020, Gopiram Agarwal, a resident of Banswara district took a case to the PLPC, where a village’s common pond was being encroached upon by “influential politicians.” “Such ponds are integral to the lives of people for drinking water of their animals and for irrigation. Some households also engage in fish culture or collect singhada [water chestnuts] for eating. Houses around them also benefit indirectly as ponds help keep the groundwater levels of people’s private wells high by recharging the water table,” Agarwal explains. “But some influential people in the villages have been encroaching upon the ponds to practise their private agriculture here, and that made parts of the ponds inaccessible to many.”

But his experience while interacting with the Cell was disappointing. “There is barely any meeting of the PLPC, barely any disposal of cases,” Agarwal says. “The Cell is not at all serious. In its absence, people go to the High Court instead, which has such huge costs… Fighting one case takes a minimum of ₹25,000.” According to Banswara’s district office, since 2019, only three cases have arrived at the PLPC; all of them have been resolved. Yet, the fact remains that with a total of three cases, Banswara has received one of the least number of cases concerning commons across the state’s districts.

The letter, accessed by The Bastion, asked four pertinent questions to all District Collectors about the date of formation of the PLPCs and the reasons for not setting up one in case of non-functioning PLPCs. It concluded with an urgent requirement, “Please send information pertaining to the mentioned points today itself [underlined in original letter] via email, so that the same can be made available to the High Court [Translated by authors from Hindi to English]”. The date of the letter was, to no surprise, 05 November 2019.

Besides from the delayed start of the Cells under pressure from the Revenue Department, there was another observation of the Cell’s inefficiency—a delay in resolving cases, which goes against the very trademark and intent of PLPCs. In April 2022, the Rajasthan High Court expressed shock upon hearing that a case that it had transferred to Pali district three years ago has not yet begun investigation into the matter. A similar trend was found in Bhilwara district. Here, of the 30 cases that the PLPC has received, 16 remain pending, as information via RTI shows. Amongst these, 12 have remained pending for more than one year, as opposed to the 90 day resolution that the functions of PLPC promises.

This is not to say that the PLPCs have collectively failed. “We have had some very active PLPC members in the past in Pali. During their tenure, investigations have been conducted and orders have been given to remove encroachments, like temples and cement factories that have encroached upon gauchar or grazing lands,” says Raju Ram.

Whether as grazing lands, water bodies, or sanctums, commons in Rajasthan are intrinsic to residents’ lives and livelihoods. It is no surprise then, that encroachments on commons that limit communities’ access to these lands hinder their everyday lives. While Part 1 of the series highlighted the limitations of these Cells’ functioning. In Part 2 of this series, we find that where PLPCs do function, the final implementation of orders is far from ideal, as they exist in a nexus of local politics and power relations, working on the behalf of a community that has minimum awareness of the Cells’ powers in the first place.