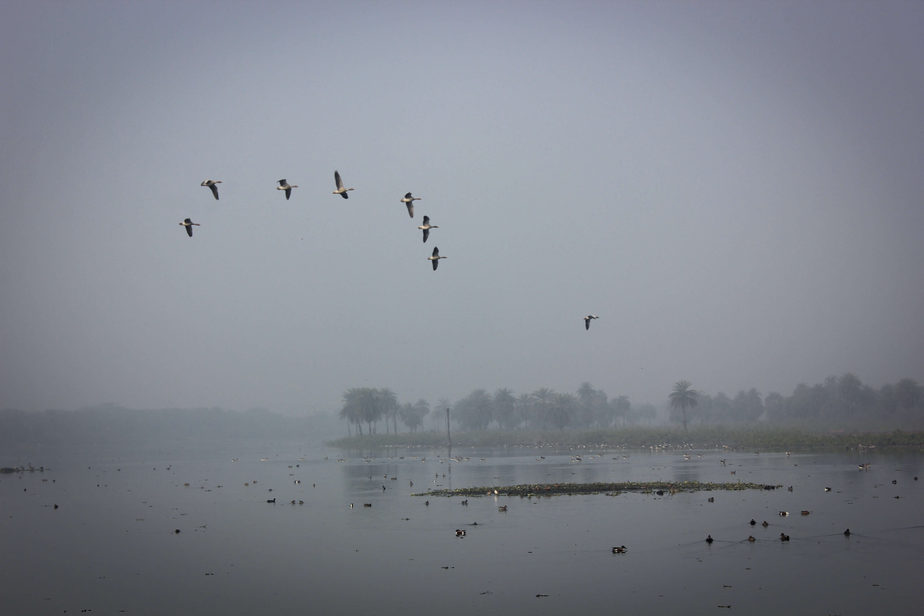 Written by Vaishnavi Rathore | This article is the second instalment of Vaishnavi’s series ‘Ecology and the City’, which explores how complications in urban governance and administrative responsibilities affect surrounding ecosystems. Click here to read Part 1, “All Park and No Play.”

In our minds, Greater Noida is supposed to be lined by skyscrapers reaching for the sky, four-laned roads, swanky malls, and sprawling offices and industries. It is not supposed to have farms with wheat crops turning golden or acres of kikar forests. It is definitely not supposed to have a wetland visited by hundreds of migratory birds in the winter months.

Pakshi Vihar, literally meaning ‘Colony of Birds’, is the local name used to address the Surajpur wetlands in Greater Noida. These wetlands are one of over 23,000 in the state of Uttar Pradesh. Of this, around 700 wetlands span over 4000 hectares of marshy land in Gautambudh Nagar—the home district of Surajpur wetlands. That a large area falls under the wetlands here is not surprising, considering that most of Noida and Greater Noida was carved out of land reclaimed from the Yamuna Floodplain. The Ganga flows about 80 km away from the wetlands, while the Hindon snakes its way around Greater Noida, effectively making this industrial township a catchment area of the rivers. 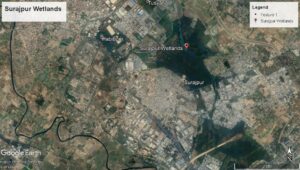 When Noida was notified in 1976 to ease the population pressure from Delhi, it was envisioned to support a population of about half a million for the coming 25 years. But, the region grew rapidly; according to the 2011 Census, Noida reached a population of half a million by 2011, with Greater Noida quickly catching up with over 1 lakh residents. The Greater Noida Development Authority took ownership of planning, development, and operations under its single head for this industrial township. It also became one of the governing and management bodies for the Surajpur wetlands, apart from the Forest Department, and the Irrigation and Flood Control Department.

Currently, the wetland is an abode for over 2,000 birds across 39 species; as per the Asian Waterbird Census conducted in early January this year, most of them were migratory species. Flocks of graylag geese, common teal, northern shoveler, and cormorants currently reside here. However, the number has thinned out from last year; this holds true for other wetlands around NCR as well.

“Over the past ten years, this wetland has been drying up during the summer months,” informs Vikrant Tongad, an environmental activist, and founder of Social Action for Forest and Environment (SAFE). “We have communicated with the Forest Department many times, asking them to correspond with the Irrigation and Flood Management Department to let more required water in through the main drain that feeds Surajpur,” he continues. “But, that conversation between the two departments does not seem to happen.”

The reasons assigned for the shrinking wetland during the summer range from the decreasing groundwater in the area, to increasing urbanisation, to the breaking off of the natural channels that feed the wetland. The latest development on this front comes from a Sports City, whose foundations are currently being laid adjacent to the wetland. Such developments are alarming for a region where groundwater depletion is on the rise: two blocks of Gautambudh Nagar fall under the category of ‘semi-critical’ groundwater levels. Between 2013 and 2017, the groundwater continued to deplete at a rate of one metre per annum, according to the UP Ground Water Board.

That this huge establishment would drain the groundwater in the region and directly impact these wetlands is not unlikely. “We do not want Greater Noida to become the next Gurgaon,” says Abhinav Khare, also a full-time member with SAFE. “The fact that we are close to day zero, or the day when the city will run out of water, is a close reality.”

Inefficient coordination between departments, often the result of complications in urban governance, makes the problem murkier. As this National Capital Region becomes more ‘urbane’, these challenges are only on the rise.

When Greater Noida was rapidly urbanizing, it engulfed around 300 villages under its wing.  Bhagat Ram* currently lives in one of these villages—Devla, also where the Surajpur wetlands lie—tucked in a reserved forest of 360 hectares.  Bhagat Ram is the appointed guard for the reserved forest and the wetlands by the Forest Department.

“There should be more facilities inside for the people who come to visit,” says Bhagat Ram, as he feeds his team of eight dogs who also guard the area. “Some places for tea, a park for the children, another machaan for  better viewing, all this would be good for the people from outside.”

“But will this be good for the birds?” Vikrant Tongad questions later. “The Uttar Pradesh government has an eco-tourism project set up, but in the name of ‘Eco Parks’, they were pushing for concretisation.” His point looms large over most of the wetlands across the country: when it comes to giving attention to the wetlands, a lot of it is dedicated to beautifying the place, but in the process, the local ecology suffers. “Indigenous trees were cleared out to make a children’s park and then ornamental trees were planted in their place instead,” Tongad continues.

This project by the Uttar Pradesh government, proposed in 2014, sought to include the Surajpur wetlands as a part of a 2000-acre eco-park to develop eco-tourism in Gautambudh Nagar. It proposed the creation of a meditation and yoga centre, a souvenir shop, and camping sites on the fragile marshland. “What is the need for these here?” Tongad questions.

#UPCM has announced the launch of a New Tourism Policy 2017 that provides enormous opportunities to investors. We will promote Eco Tourism, Wildlife Tourism, Spiritual and Religious Tourism in a big way: @CMOfficeUP @myogiadityanath at #UPInvestorsSummit2018

Tongad works with a team of volunteers–including students, researchers, businessmen, and lawyers–who helped take the case to the National Green Tribunal (NGT). Thankfully, the Tribunal stayed any construction inside the wetland and sought reports from the concerned authorities. The case which went on for two years, ended with a favourable judgement—The Surajpur wetlands were notified by the NGT, making all the rules under the Wetland Conservation and Management Rules applicable to their geographical spread. They were now officially a ‘wetland’ that required separate attention, and no longer overshadowed by the reserved forest.

What other added advantages do groups like SAFE have that help make them an equal stakeholder in the urban governance map? Stay tuned for Part 3 of ‘Ecology and the City’!

Vaishnavi works as an Environment Associate with The Bastion, and is interested in covering stories on forest and land rights, ecological restoration, governance of commons, and environmental justice. 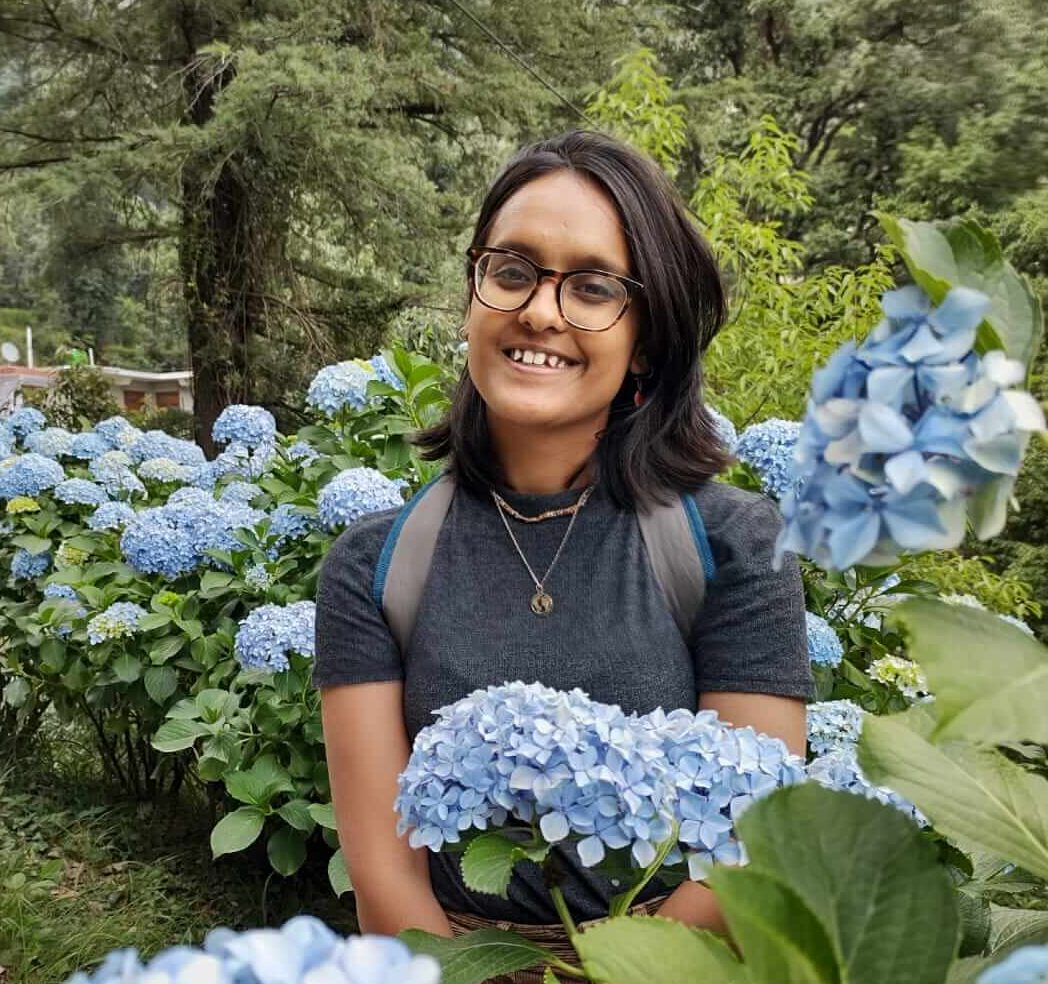