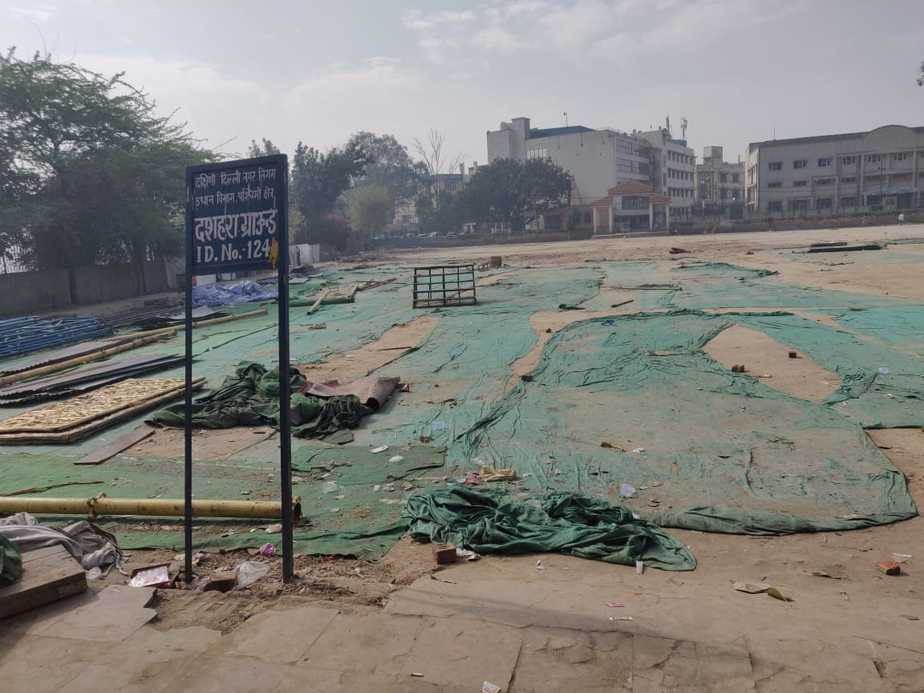 Written by Vaishnavi Rathore | This article is the first instalment of Vaishnavi’s series ‘Ecology and the City’, which explores how complications in urban governance and administrative responsibilities affect surrounding ecosystems. Click here to read Part 2, “From a Bird’s-Eye View.”

It was almost midnight when Rahul Lau suddenly woke up in his home in South-West Delhi’s Vikaspuri. Loud music blared from the DJ in the park opposite to his residence, causing vibrations of such intensity that doors, windows, and shelves began to shake too. He called the police to lodge an official complaint and then attempted to sleep again. For Vikaspuri’s residents, this is now a part of their nightly routine for the months following Dussehra, and through the wedding season between November to February.

The 4.5 acre Dussehra park opposite to Rahul’s home was supposed to provide a green space for residents of the adjacent Budhela village, and other residential colonies. Even in the Delhi Master Plan–a strategic plan of the city prepared by the Delhi Development Authority (DDA) in 1962–it is sketched and labeled as just a ‘park’.

But as of today, most of the park’s area is perpetually engulfed by tents for wedding functions, with just one small area left for use as a park. But it is not just the loud music played post the cut-off time of 10 pm that causes a nuisance, but the events that unfold the morning after too.

“Whenever there is a function, everything leftover—food, plates, cutlery—is dumped inside the park, or just adjacent to its periphery,” says Jyoti Lau, a resident of the locality. “The stink that follows is unbearable. As all the waste is dumped without being cleaned up, many of our neighbours have gotten dengue.”

In fact, when the residents took the matter to the National Green Tribunal (NGT) last year, the findings of the site inspection by the Delhi Pollution Control Committee mirrored the residents’ grievances. “Solid waste was observed inside the park and pigs were moving and feeding on the waste…solid waste was (also) openly lying outside of the park,” the report states.

In 1997, a Supreme Court judgment ruled that no more than ten days of functions per month may be booked in such parks. It also ruled that while issuing such permissions, the New Delhi Municipal Corporation has a duty to see that the least disturbance possible is caused to the residents of the area. In the experience of the residents here, this has been far from true.

Early on, the management of the park underwent a shift. In 1987, the “services” of Budhela village, which included this particular park, were transferred from the Horticulture Division of DDA to the Municipal Corporation of Delhi. Somewhere over the years, it started being referred to as ‘ground’, and not a ‘park,’ thereby also altering the nature of its use from a recreational area, to a multipurpose ground for marriages and functions. But here is the catch—on paper, this change seems to be a well-kept secret.

“I have asked the South Delhi Municipal Corporation (SDMC) to provide a copy of the resolution showing this shift of land use from park to ground, but there was no response to my RTI application,” says Paras Tyagi, co-founder of the Centre of Youth, Culture, Law and Environment, and a resident of Budhela Village. When he moved to first appeal with the issue, he was told that the document was very old and the administration does not have it.

Except FOR a small patch of green, the park now barely looks like one. In information obtained by Tyagi through an RTI, it was found that the SDMC planted 136 trees between January 2017 and May 2018. Today, apart from a few Eucalyptus trees, that number does not see its match in the park. When the need for more trees in the park was raised by Tyagi, the Deputy Director of Horticulture, SDMC replied saying “…there is an old Safeda (Eucalyptus) tree in the park…” and then closed the complaint.

Additionally, when parks are permitted to host 10 days worth of functions a month, the organisers are also required to dismantle tents, chairs, and other decorations post the event. But in this park, the tents go up, and never come down. A generator is permanently parked outside. Iron rods, curtains, and tables lie inside, regardless of whether there is a function at night or not. “We used to play cricket here as children,” says Rahul. “When you look at this ground now, can you believe it?”

The park functions as a lucrative business opportunity for the SDMC. An SDMC operated Community Hall lies opposite to the park, and was originally supposed to host such functions. But, the two-storeyed building has mostly lied unoccupied.

As the money rolls in, the park witnesses mostly wedding functions, sometimes three on the same day. “The noise pollution does not let our children study,” says Dhanalakshmi, also an RWA member of F Block, Vikaspuri. “Since this park was not meant to hold functions, it does not have a parking space. During functions, the entire road faces congestion, and causes a problem to at least 20 housing societies that reside here.”

The residents have registered at least 16 complaints to the Lieutenant Governor of Delhi and to the South Delhi Municipal Corporation. Numerous phone calls to the police have also been made. But any change seems to be a far cry.

The Complexities of Governance

Splitting open this issue, it appears that this 4.5-acre park in Vikaspuri has multiple actors governing it. First, the DDA was responsible, before it shifted to the SDMC. Even under the SDMC, RTIs changed hands between the Horticulture Department and the Community Services Department. In this context, it is difficult to miss the multiplicities of governing the city: multiple organisations performing similar functions, and trying to govern over a single area, throws up the complications of urban governance.

This becomes clearer with another illegality that the residents point out. Numerous stalls have popped up along the periphery of the park offering food and juice services, a few of which the residents claim even drilled bore wells inside the park to use the groundwater. In view of the complaint, the Delhi Jal Board, a para-statal agency under the state government, wrote to the South West District Magistrate, and requested that “direct concerned officials seal the bore wells existing at [the] above premises at the earliest.” 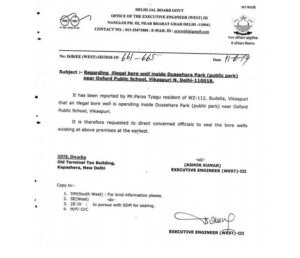 In response, as revealed through RTI, the SDMC time and again corresponded saying that the said bore well is “outside the premises of the Dussehra Park.” In situations like this, who has the final word? While that is up for discussion, the residents continue to struggle. “It is disheartening to get that response,” says Rahul. “We saw the bore well being drilled in front of our eyes in the park, and now the department says that it exists outside.”

It is also worthwhile to note that where agencies like DDA and DJB are non-elected agencies, the Municipal Corporation of Delhi, including SDMC is an elected body whose priority lies in maintaining vote shares. Even though Vikaspuri is a large constituency of almost 4 lakh voters, this residential area forms a small vote bank.

“Our voices don’t matter to them,” says Jyoti. “While 3 residents welfare associations are putting up the fight currently for the proper use of the park, there are many more who are impacted, but are afraid to voice it out.”

The Delhi High Court witnessed a similar case in August 2018, where it ruled that “recreational and other uses of parks can’t be curtailed by way of allowing use for cultural, social or commercial functions. The same has the effect of degrading the environment and undermining the utility of parks as a source of recreation for the general public.” Left dissatisfied after corresponding with all departments, Vikaspuri residents are not left with any choice. They are approaching the High Court now.

“There is another DDA park close by which strictly allows functions for limited days, and keeps the park maintained after the functions,” informs Rahul. “People who are approaching this Dusshera Park can alternately go there, or use the Community Hall.”

The RWA members are keen on being an actor in governing the park. The idea of involving RWAs in maintaining parks of Delhi has also been egged on by the Delhi Government. But before that, they need the park to start functioning as one.

“Vikaspuri was one of the earliest planned areas of the city,” says Paras Tyagi. “Vikas means development. Is this the kind of development that we should be seeing?”