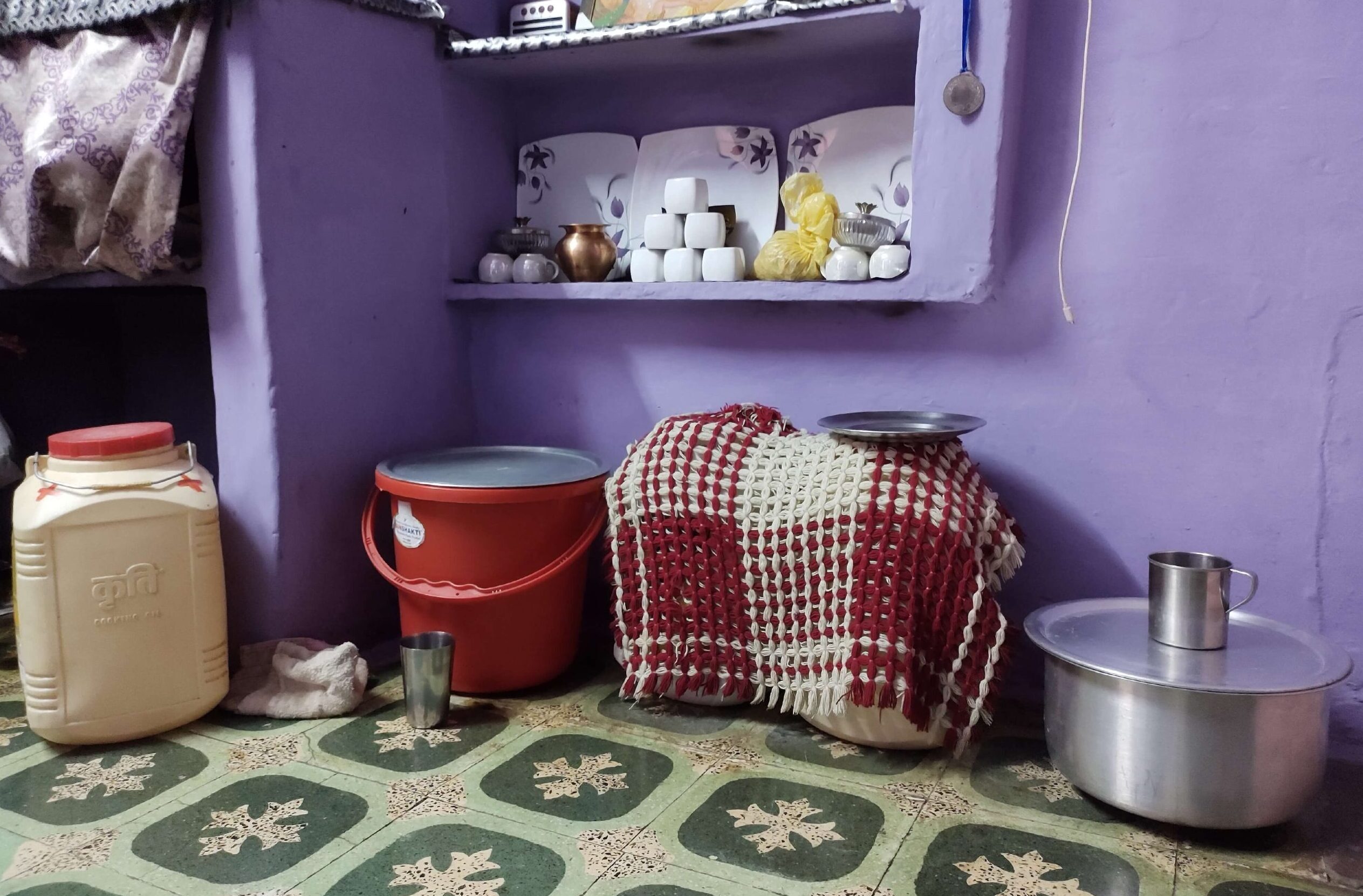 25-year-old Kavita Naresh is quick on her feet. She has to be, for she has just about an hour to fill water from one of the four common taps in her informal settlement of Regiment Bazaar basti in Mhow city. In the same one hour span, about 200 households compete to fill the water. Kavita quickly attaches a pipe and a motor to the tap a few metres away—a skill she is now adept at. She fills up empty oil containers, large blue drums, earthen pots and buckets so the water lasts them for at least four days. In the bustle of people filling buckets, one almost forgets that this is an unearthly hour of 3 am.

“Neend hi kharab ho jati hai, didi, [This disrupts our sleep],” Kavita tells me when I meet her the next afternoon. Her mother finishes a late lunch at 4pm, having helped their neighbours with filling water at the only other hour of 3 pm in the afternoon when water is supplied. The basti has an unsaid rule, that the house closest to the public tap fills water first, and the rest follow in sequence. So, even when water is supplied everyday for an hour each in the early morning and late afternoon, for Kavita’s family, the next turn to fill their storage will come in four days.

“For the very few people who have pipelines and taps inside their homes in the basti, unko ye line mei hone ka jhanjhat hi nahi hai [they don’t have to worry about standing in lines and collecting water],” Kavita says. These tenured houses have the requisite infrastructure of pipelines to receive water from the Narmada project, while for those like Kavita, water is supplied through borewells.

In Indore district, of 292 panchayats that have applied for the Jal Jeevan Mission’s Har Ghar Jal [Tapwater in Every House] Scheme, only 93 panchayats, or 32 percent, have the pipelines completed. In all of Madhya Pradesh, the number is even more dismal—only 17% of the population of rural Madhya Pradesh has access to piped water. With no pipes at homes, the supply of Narmada water remains a piped dream for many. As Part 1 of this series flagged, only 54% of the IMC’s population was receiving 171 litres per capita per day through piped water, while 46 percent were heavily reliant on standposts, open wells and hand pumps for a small proportion of 46 litres per capita per day.

What is causing this inequity?

When it comes to informal settlements in Mhow tehsil, very few have access to pipelines in homes. “We [Cantonment Board] have not been able to supply piped water in the bastis that fall in our jurisdiction, because some of them are 2 to 3 kilometres away from the pump house, and ensuring water in these would have been very difficult,” says H.S Kaloya, Chief Engineer at Mhow Cantonment Board. “Already the water that we are able to supply within Mhow does not have enough pressure, and it is highly unlikely that we would be able to supply water in areas further away.” The IMC supplies water to the Board in bulk, all of which is from the Narmada Project which the Board then supplies mostly to the Mhow cantonment. “Since the IMC also gives us a fixed amount of water to supply, some areas like bastis get left out. For them, we supply water through local sources such as open wells and borewells.”

A similar sentiment occurred in a conversation with Lalit Beragi from Gawli Palasia, a village which has access to piped water and Narmada water supplied by Indore Municipal Corporation. Upon asking why so many people lined up in front of his house to store water from common taps instead of using pipelines at homes, Beragi lowers his voice. “They do not have taps and pipes at homes. They are poorer people, they are from lower castes,” he says, reinforcing that when there are limited resources, some groups get left out.

The status of land tenure is also closely related to who gains access to piped water—something that various researchers across India have documented. “Those people who have patta [land rights] have been able to apply for piped supply in their homes and received them too,” says Kavita. Even while her family has been living in the house for at least two generations, they do not own a land title to their home, like most of this informal housing settlement. Their water supply then is only through the groundwater supplied to them by the Cantonment Board.

At times of severe water shortage in the basti, social capital plays an important role. “We fill the water for us as well as my cousin sister, who is our neighbour,” Kavita says. Her sister works as a house help in the area around and on most days is not available during the afternoon water supply. Kavita has also met the local MLA raising the problems of water supply, but she is ascertained that he has been helping only those bastis from whom he finds a voter base. “Our neighbouring basti has water after residents approached him, jo chaaplusi karta hai uska fayda hota hai [whoever can flatter the MLA, benefits],” she says.

But, even where pipelines are available at home, all is not well with the Narmada water project.

Har Ghar Nal, but Not Jal

In Gawli Palasia, about 2000 homes have benefitted under the Har Ghar Jal Scheme. And yet, the benefit of the Narmada scheme is limited to about 45 minutes a day. The twenty wards in the village also get water on a rotational basis, leaving a gap of a few days in the supply. “This [Narmada project] is an old pipeline that was laid down in 1984, and since then, IMC has given the same amount of water while the population of the village has increased by many,” a resident of the village seeking anonymity says in a busy Panchayat office, as a panchayat official nods in agreement. “The Narmada line connected to us is 4-inches, and now for more quantity of water, the panchayat office has asked for 6-inches to be laid,” the resident says. “We have given the proposal, let’s see how it moves ahead,” the panchayat official adds.

Just a kilometre away from Gawli Palasia, a strange situation exists in Dongargaon. Here, most houses have pipelines and taps, but no water. “Three phases of the Narmada Project have come and gone, but we have not benefited from even one,” says Mustaak, the Sarpanch of the village. “It’s been more than a year since we submitted the proposal for the Narmada supply of drinking water, but it has not moved ahead. They ask for a ₹5-7 lakh deposit, which we have not been able to give yet.”

As the pipelines inside homes in Dongargaon remain dry, the panchayat office has connected a borewell supply to the village, the water of which is first stored in overhead tanks before being pumped to common taps in the village. But since the groundwater depletes immensely in the summer, the months of May and June remain dry, which causes water to reach each mohalla in the panchayat once in seven days.

In summers then, a lot of families have to rely on water tankers. “Pipeline toh pahuch gayi hai, bas paani ka intezaar hai [the pipeline has reached, now we await the water],” Mustaak says. But, his co-panchayat official remains wary of the benefits of the project. As neighbours to Gawli Palasia, they are well aware of the limited duration of supply of Narmada water project, but at least people will not have to stand in queues at common taps and compete with others during the limited time, he shares with me on a short walk to the overhead tank.

In face of this skewed water supply in Indore district, Dr Rahul Banerjee of the Dhas Gramin Vikas Kendra makes a suggestion. “The IMC must push the more affluent citizens, corporations, private players, and government institutions—those who possess more of the urban land—to cater to their water needs through localised initiatives like rainwater harvesting. This will then free up financial resources for IMC to provide subsidised or free water resources to those who are not in the position to pay for it,” adds Banerjee.

While the Narmada water project and its various phases have been able to benefit some settlements in and around Mhow, the financial burden of lifting this water is weighing heavy on IMC—owing to both a limited collection of user charges as well as heavy leakage in the pipeline. Of what is left to supply, a skewed nature of who benefits from it is very visible. As I drove on a late afternoon drive to the Cantonment Board office for an interview, the RJ on the city FM radio gave a reminder between songs about Indore’s current water scarcity. She says “If you are privileged enough to receive a 24 x 7 water supply at home, be judicious of its use, because there are so many around you that don’t have the same luxury.” I overtake a few water tankers that are plying around the town, and the RJ’s words hit home, as I see the tanker turning towards Kavita’s Regiment bazaar basti.

Featured image of the many utensils Kavita and her mother fill from the one-hour supply in their basti to ensure that they have enough water for the next four-five days taken by Vaishnavi Rathore.