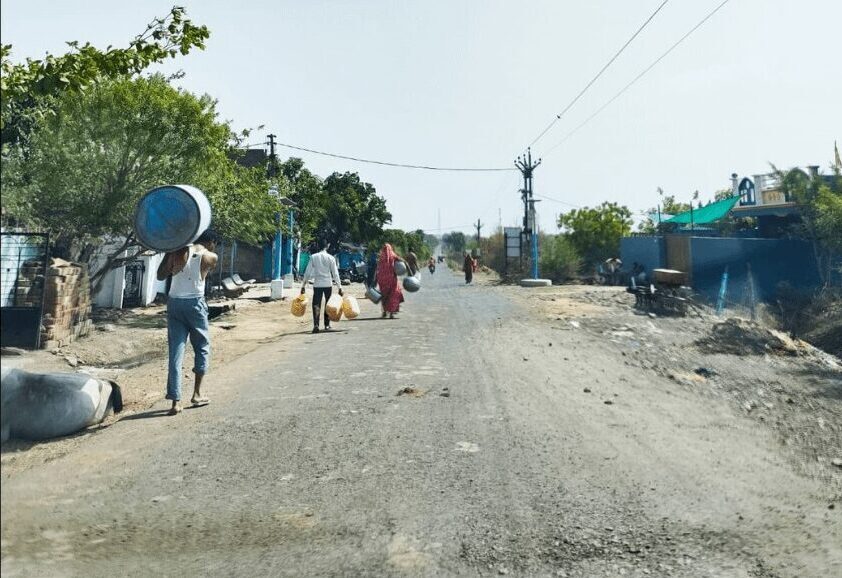 This is Part One of a series on the Narmada Water Project in Madhya Pradesh. Read Part Two: Who is Benefitting in Indore District from Expensive Water Piped from the Narmada?

Lalit Beragi has a peculiar complaint. Since 2014, he has been writing to the Zilla collector to change the position of a public water tap attached to his home in Gawli Palasia, a village in Madhya Pradesh’s Indore district. “Every other day, when people come to fill water from this tap to take to their homes, they end up fighting amongst each other or with me, when I request them to not dirty the area around… [the tap]  is along the wall of my home,” Beragi tells me, as he finishes a mending a shirt in his kirana store-cum-home in the village. “Iss roj ka magajmaari ko hatana hai yaha se, [I want this everyday hassle to be removed from here].”

Gawli Palasia is one of the three villages in Mhow tehsil whose drinking water supply comes from the Narmada Project. Supplied by the Indore Municipal Corporation and Mhow Cantonment Board together, three phases of the Project have been installed since the 1970s to meet the expanding water demand in Indore district. It made the Narmada river the major source of drinking water for people in the region. The ambitious Narmada Project lifts water up from the Narmada which flows about 70 kilometres south of the city of Indore, where it is treated to become potable, before being pumped up to a height of 500 metres. Before reaching Indore, the Narmada Project also feeds water along the way to Mandleshwar, Kodariya, Rau, and Beragi’s home in Gawli Palasia, amongst other places.

This entire lifting and treating process is what makes the Narmada Project “the costliest in the country”, as Madhya Pradesh’s former Urban Development Minister Jaivardhan Singh had stated in 2019, while adding that supplying such expensive water would not be sustainable in the long run. By the minister’s own admission, it cost about ₹30 to transport 1000 litres of water back then. Yet, in April 2022, the Indore Municipal Corporation (IMC) earmarked 25% of its overall budget to launch Phase 4 of the Narmada project, even though the IMC has not been able to recover costs from the initial phases of this expensive project. In the meanwhile, even where the Narmada water is supplied to homes, residents still line up in front of public taps, leading to immense competition and fights, like the ones that Beragi witnesses on a daily basis.

What then is making the Narmada Project financially unviable, and how does it impact the lives of the intended beneficiaries? To find out, The Bastion spoke to residents of villages that benefit from this unique water project, along with villagers and informal residents in Mhow Tehsil who continue to be excluded despite the water pipeline running past their villages.

“With this Narmada water supply, the Indore Municipal Corporation [which also supplies water in bulk to Mhow tehsil] is reeling under huge costs that they are not able to recover,” says Indore-based Dr Rahul Banarjee, associated with the Dhas Gramin Vikas Kendra. After analysing the costs and revenue of the Indore Municipal Corporation (IMC), he found that from ₹110 crores in 2011, the annual financial burden of bringing Narmada water to the district had increased to ₹180 crores in 2014. Recovery of these costs was uninspiring;  via water taxes, user charges, and state government grants, the Corporation recovered a paltry sum of around ₹50 crores. As of 2018, the IMC recovered only 35% of the water charges, as a Comptroller and Auditor General (CAG) report shows.

“To lift water from 70 kilometres away, and then pump it across this distance… it has immense costs, including that of electricity,” Dr Banerjee adds. In the past, the IMC’s inability to pay the Western Region Power Distribution Company for their electricity usage has also resulted in disruptions to their water supply.

In a busy panchayat office at Gawli Palasia—where whose households also receive water from the Narmada—a resident of the village shares such an experience of water supply disruption. “About two years ago, the supply had completely stopped,” he says on the condition of anonymity. Indeed, 2020 saw the water supply from the Narmada project discontinued at Gawli Palasia and a neighbouring village of Kodariya, for a cause that resonates with Dr Banerjee’s findings. Together, these villages owed a colossal ₹20 crores to the IMC in the form of water bills, which were pending for 5 months as residents did not pay their individual bills on time. With water subsidies being a hotly contested political issue, opposition parties would often repeatedly point to this maladministration, and supply was cut for over a month.

“During such water cuts, we have to rely almost completely on private water tankers which cost anywhere between ₹300 to ₹600 in peak summers for 6000 litres,” the resident adds, as they tend to some marriage certificate paperwork at the panchayat office. One panchayat official briefly looks up from the papers he is signing and adds, “We are trying our best to pay the latest water bills per month, but the older dues have piled up, which we are not able to pay.”

Another factor that is mounting the costs of the Narmada project for the IMC are non-revenue costs, like the loss of water due to leakage, waste, errors in metering, and unbilled or illegal connections. And Mhow tehsil—where the primary line of this project passes through—is no stranger to such leakages.

Over the years, various instances of the project’s pipelines bursting and leaking have been recorded in Indore city as well as in Mhow. Between 2013 and 2018, the IMC found over 2600 cases of leakages. The latest occurred at Mhow about three months ago, which led to gallons of water being wasted. Together, such leakages—including the illegal connections—have been responsible for a loss of  65 to 70 percent of the total water that the IMC receives from the Narmada as well as a small proportion of groundwater, besides the lakes of Bilawali and Yashwant Sagar. Expenses accompany these leaks, costing the IMC no less than ₹15 crores to repair, as a CAG report calculated between 2013 and 2018.

“Physical damage like leakages in the Narmada supply could be because these lines are quite old now, and if there is a sudden pressure or heavy load of water, they tend to get damaged,” says H.S Kaloya, Chief Engineer at the Mhow Cantonment Board. “Other times, when there is construction happening, or roads are being dug up, that too can cause temporary damages in the line, which end up impacting the water supply.” Such leakages and illegal connections from the Narmada water supply directly increase its cost.

Dr Banerjee adds that instead of a centralised piped water system like the Narmada pipeline, solutions can be found at a more decentralised level. These include rejuvenating the many step-wells and lakes in Indore, efforts for which are slowly underway by the IMC.

After various leakages, what ultimately reaches citizens is also skewed—2014 data showed that within IMC limits, only 54% of the population has been receiving 171 litres per capita per day through piped water, while 46% were relying heavily on stand posts, open wells and handpumps for a small proportion of 46 litres per capita per day. Those who fall in the latter category also include subjects of Beragi’s ire, who do not have access to tapped water within their homes. And when it comes to gaining access to taps at home, money speaks.

Water is a resource that is non-negotiable, in terms of its vitality to life and livelihoods. Reducing the dependency that the residents of Indore and neighbouring villages currently have on piped water from the Narmada River is not going to be an overnight task, and it is an effort that demands deliberation and execution to be spot on. Here’s Part Two of this series on the Narmada Water Project: Who is Benefitting in Indore District from Expensive Water Piped from the Narmada?

Featured image of villagers in Mhow tehsil without Narmada water supply walking with containers to fill water from a common tap taken by Vaishnavi Rathore.