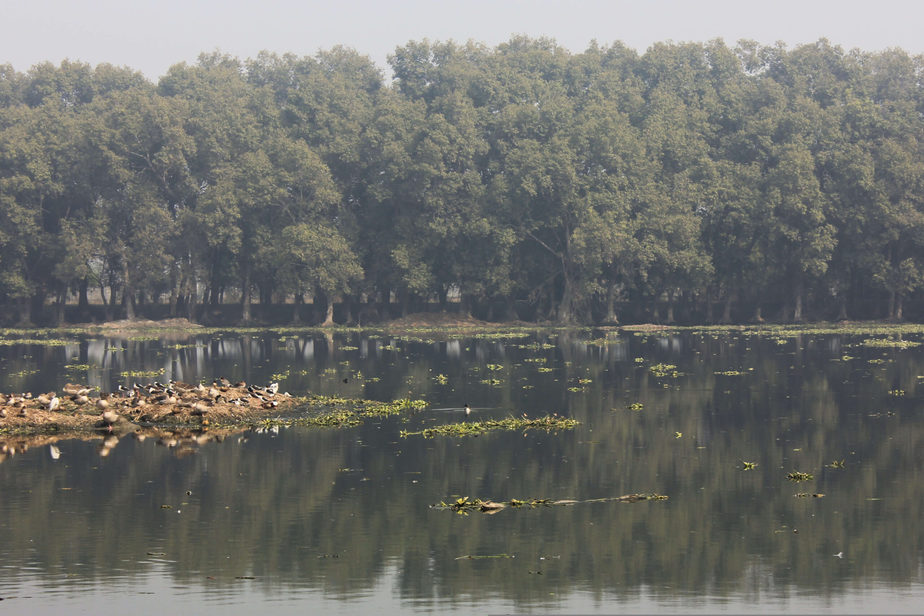 Authored by Vaishnavi Rathore | This article is the final instalment of Vaishnavi’s series ‘Ecology and the City’, which explores how complications in urban governance and administrative responsibilities affect surrounding ecosystems. Click here to read parts one and two.

In late January, a group of students from Delhi University became guests at the homes of hundreds of local and migratory birds. As they walked through the marshy lands within the reserved forest of the Surajpur wetlands, they were filled with ideas and discussion. The students had spent the earlier part of the morning at the banks of the Hindon, the river that snakes around the industrial township of Greater Noida.

For some time now, this group of students has been working on a ‘business model’ to manage the untreated waste that has been entering the Hindon river, and impacting the health of the wetlands. They now propose to test it out with assistance from an NGO based in Greater Noida—Social Action for Forest and Environment (SAFE).

Yesterday we have organised environmental workshop with enactus at Surajpur Wetland. After that we have also discussed about pollution in the Hindan and its remedies. SAFE & students are planning together how the dirt can be prevented from entering the hindan river & wetland. pic.twitter.com/JuGtbChDXH

The Surajpur wetlands which are locally known as Pakshi Vihar or ‘Colony of Birds’ are one of the 23,000 wetlands located in the state of Uttar Pradesh.  Of this, the district of Gautambudh Nagar is home to 700 wetlands covering over 4,000 hectares of land. The Greater Noida Industrial Development Authority (GNIDA), Forest Department, and the Irrigation and Flood Management Department are a few bodies that are trusted with managing over these wetlands, but the lack of coordination amongst them screams of the murkiness that accompanies urban governance. Meanwhile, the threats of decreasing groundwater in the area and increasing urbanisation loom large over the area.

It is here that an added stakeholder has been weighing itself heavy against these threats: citizens’ groups in coordination with Non-Governmental Organisations (including the students from Delhi University.) The students passed by signboards with the logo of the World Wide Fund (WWF) on them, that spelled out the bird species easily spotted in the wetlands. In fact, the WWF too is an actor in this complex web of governance.

In 2010, the Uttar Pradesh Forest Department and the GNIDA in collaboration with WWF-India initiated a project to conserve and develop the Surajpur wetlands. Broadly, it concentrated on ecological monitoring, management interventions (through clearing out the invasive water hyacinth), capacity building through workshops with local authorities, and conservation education and awareness. Without the burdens of strict departmental boundaries, civil society and citizen groups see the wetlands as a part of a larger ecosystem that feeds into each other.

The government, on the other hand, believes in isolating and fragmenting the forests and wetlands, ignoring the delicate inter-linkages that it shares with its surroundings.

From Departments to ‘Ecosystems’

One such instance of this isolating tendency of the government is the concrete boundary wall that separates the wetlands from the industrial hub across the road, the farms adjacent to it, and most ironically, a chain of six smaller wetlands that belong to the Surajpur wetlands. These are literally spared by the wall—yet, while Surajpur is a notified wetland, the six are not.

“Any impact, negative or positive, on those six wetlands outside will also affect the health of Surajpur wetlands. They are all a part of the same system, which is a larger part of the river system of the Hindon too,” says Vikrant Tongad from SAFE. The National Green Tribunal disposed of a plea to notify the additional wetlands on the grounds that there was no revenue record to corroborate that the other low lying areas were wetlands. SAFE then took its appeal to the Supreme Court. The case is still ongoing.

The same approach of looking at interlinkages between ecosystems also attracted SAFE’s attention towards a major channel that feeds into the wetlands, which is now getting increasingly tarnished by industrial effluents from around. “At some points, we have even seen foam being formed in that main stream,” says Tongad. “This affects the water quality of the wetlands too.”

The main stream that Tongad talks of is a tributary of the Hindon, a river that is already fighting toxic pollution. In March 2019, the NGT mentioned that the Hindon, Kali Nadi, and Krishna rivers had caused cancer and deaths, impacting almost 1000 people.

It found that the cause of cancer was the discharge of untreated sewage and industrial effluents into the rivers from many districts of Uttar Pradesh, including Gautambudh Nagar. At least 118 non-complying industries were persecuted.

Now, when the Hindon enters Ghaziabad, its quality already begins to get compromised. Where the dissolved oxygen should be greater than 4mg/l, the Hindon’s is at 0, making it a ‘dead river’. Where Biochemical Oxygen Dissolved, which is the amount of dissolved oxygen needed by aerobic organisms to break down organic material, should be less than 3 mg/l, it is currently much higher in the river, ranging between 32-78 mg/l. 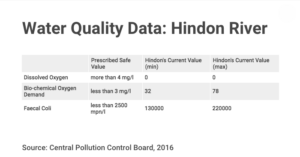 “The general trend that you would see for any policy now is that the government implements it without any awareness about it,” says Abhinav Khare, a member of SAFE. “We concentrate on spreading awareness, and completing that loop.”

Earlier this month, citizen groups inaugurated an 84 kilometre-long afforestation yatra, wherein a group meets every week to plant a tree one kilometre away from the last planted sapling. The yatra will end at the Ganga river. “Many people have taunted us saying, “what is the point of planting a tree anyway?” But, they don’t understand that the more important part is the discussions that follow.” In the last tree planting, a group of farmers, business people, students, and concerned citizens joined in, and was followed by a discussion on the untreated waste dumping in the river and water quality of the wetlands, amongst other things. They envision the rest of their yatra to be dotted with similar discussions.

“When we work with citizen groups, we have noticed a more emotional connection to the cause,” Khare remarks. “Sometimes, they even crowdsource the money, so they become a key stakeholder in problem-solving.”

Through their efforts of awareness building, litigation, and direct action, they ensure that most problems that arise are nipped right in the bud. So, while the threats to the ecosystem today are many, the wetlands have not taken a turn for the worse yet, due to these constant checks and balances provided by such groups.

“We cannot sit around let things get worse,” says Vikrant Tongad. As he speaks, a sarus crane takes flight over the water body where several ducks swim.  Further on the horizon, a heavy weight lifting crane is at work, building the Sports City in close vicinity to the wetlands. Between the two cranes, only one truly belongs here.