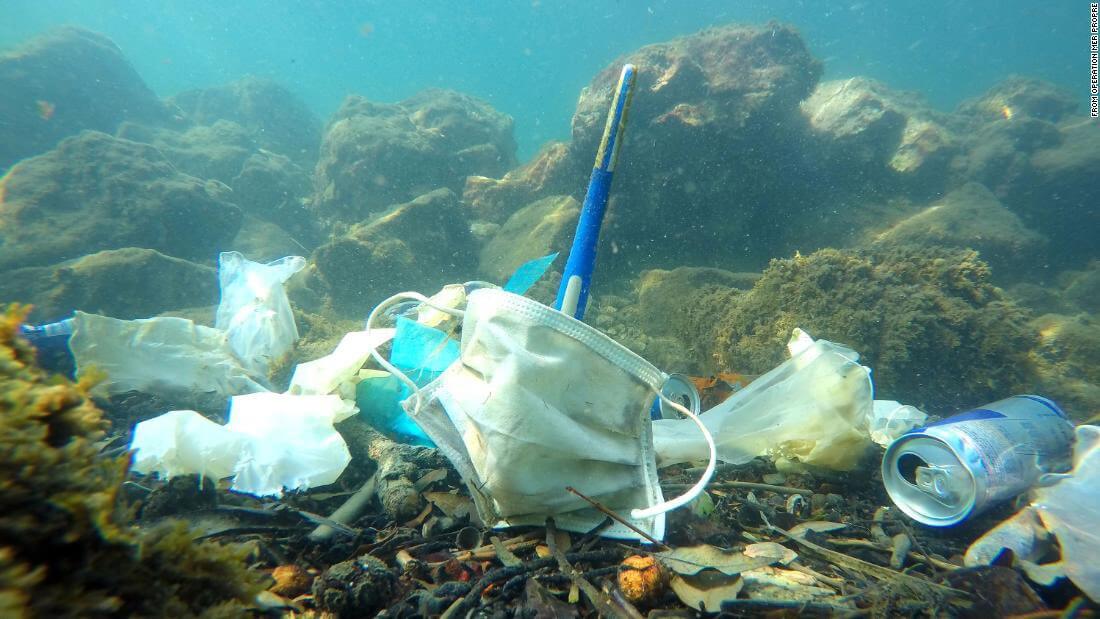 A wholly unintentional (and welcome) consequence of global lockdowns and travel restrictions is the positive impact they can have on the environment, right from improved air quality in cities to the healing of a hole in the ozone layer over the Arctic. COVID-19 has induced a global downturn in industrial activity, air travel and the amount of energy consumed by cities.

But, as the adage goes, old habits die hard; in our case, some may live longer during distress. This is true for the world’s affinity for single-use plastic, which seems to have only gotten stronger with the pandemic. So much so, that some plastic manufacturers and lobbyists in the UK and US have actually tried capitalizing on the global health crisis to promote the use of their products and resist bans on single-use plastics.

Images have surfaced of gloves floating like plastic bags in the ocean. These are easily mistaken for food by animals like turtles (to which floating plastic resembles jellyfish), inadvertently entering the food chain thereafter. Personal Protective Equipment (PPEs) and masks pose unique problems such as entangling hazards in marine ecosystems. Eventually, all these products get broken down into microplastics entering our food chain. A University of Newcastle study has found that an average person could be ingesting up to 5 grams of plastic, the equivalent of a credit card, every week. The largest source of this plastic ingestion? Via water.

Antonis Mavropoulos of the International Solid Waste Association has stated that the consumption of single-use plastic in the United States has increased by 250 to 300 percent in 2020. Most of this increase is owed to products that are meant to curb the spread of the virus. For example, the global disposable mask market is predicted to grow from around $800mn in 2019 to $166bn in 2020. Our waste disposal systems are unequipped to deal with such rises in use. A recent WWF report noted that incorrectly disposing of even 1 percent of masks “would result in 10 million masks per month dispersed in the environment.

Considering that the weight of each mask is about 4 grams, this would entail the dispersion of over 40 thousand kilograms of plastic in nature: a dangerous scenario that must be defused.” This surge in the production and consumption of single-use plastic shows no signs of receding, so long as the threat of infection persists. The Indian state-of-affairs is a microcosm of this global problem.

In 2017-18, India consumed around 16.5 million tons of plastic, around half of which was of single-use (used in packaging), making it difficult for recycling. Our consumption levels have outstripped our ability to recycle, due to which only 40 to 60 percent of India’s plastic is recycled. Recycling efforts have generally focused on more ‘lucrative’ wastes such as water and shampoo bottles that are easier to gather and process.

Most single-use plastic ends up in landfills, water bodies, or simply strewn in the streets. The toxins inevitably seep into soil and groundwater, contaminating the environment and causing irreparable harm to marine life and other organisms.

The Plastic Waste Management (Amended) Rules, 2018 were enacted to regulate plastic waste management and phase out the use of Multi-Layered Plastic (MLP). The Rules sought to create an effective waste management system and allocate responsibility to every stakeholder in the system. It mandated that plastic bags must be 40 to 50 microns so that collecting and appropriately disposing of plastic waste would be easier. Moreover, the increase in thickness would result in a hike in the overall cost of production, which was intended to discourage the rampant use of single-use plastic bags.

You May Also Like: Recycling India’s Waste Woes: A Two-Pronged Solution

The 2018 Rules also laid down the concept of ‘Extended Producer Liability’, whereby producers are made liable for collecting waste generated from their products. Despite being well-drafted, the Rules failed to achieve their intended effect due to several reasons, ranging from Municipal corporations’ failure to implement waste segregation, severe underreporting of the actual extent of plastic waste, lack of adequate infrastructure and trained staff for recycling, lack of public awareness, information asymmetries and wavering political will.

India’s waste segregation and recycling sector operates as a second economy through an informal chain of workers such as rag-pickers, segregators, NGOs, and small businesses that are responsible for 85 to 90 percent of recycling. The lockdown has severely restricted their work, hindering collection activities as well as shutting plants, thereby disrupting various stages of the recycling process. Furthermore, the fear of contracting the virus has resulted in labour shortages (especially the lack of secondary segregators) and health, safety and environment (HSE) issues. Erratic waste collection by municipalities has made it difficult for plants to procure waste from aggregators and has increased operating costs.

Is Plastic a Necessary Evil?

Plastics have actually been an integral part of COVID-19 relief efforts. For example, the Kerala government, which had earlier banned plastic under 50 microns, recently procured the same in large volumes for packaging and distributing free food in a hygienic manner. Such rollbacks on restrictions stem from the fear of cross-contamination with reusable products.

You May Also Like: Life In Plastic, Not Fantastic: Is There An Answer to New Delhi’s Woes?

In the same light, many environmentally-conscious citizens have renewed their use of plastic “out of necessity”, using single-use plastic bags and containers as a precautionary measure. And, while the increase in cloud dining and online shopping may help mitigate the spread of the virus, there is plenty to be said about the plastics being used in packaging materials. All this, despite a recently published study which notes that the virus might actually persist longer on plastic than other surfaces.

Another factor adding to ‘glut’ in plastic, is the crash in oil prices due to the recent Russia-OPEC oil war. Crude oil is a major constituent of plastic, so a drop in oil prices makes it cheaper to produce and buy virgin plastic, which gives manufacturers fewer incentives for using eco-friendly or recycled alternatives.

Amidst the pandemic, the biggest defeat for environmentalists has been the undoing of the public’s perception towards plastic. With no scalable environment-friendly alternative to the easy-to-produce, cheap and highly effective PPEs in sight, experts are concerned that years of advocacy and research might be overturned. Some have proposed the reusal of some components of PPEs (such as goggles, aprons, masks, gloves) which can be disinfected.

Last July marked the tenth year of the ‘Plastic Free July’ initiative, which intends on encouraging the public to cut down their use of single-use plastics. The unprecedented increase in plastic consumption on account of the pandemic has posed new challenges to environmentalists in 2020, and it doesn’t look like things will stop here.

Thanks @ErikSolheim Its really worrying issue. Regarding this particular case @ngtmcyamuna2 immediately asked @ControlDelhi to look into it. Team visited there on July 27. Luckily it was found material to make masks & not used masks. MCD cleaned it up on July 28. @CPCB_OFFICIAL pic.twitter.com/BbmTXzV6aa

The immediate focus of most medical teams — and rightly so — is to treat patients and controlling the spread of infection. Keeping in mind that medical practitioners’ own health is of utmost importance, researchers are already trying to make protective gear more sustainable, with a reusable  N-95 mask prototype and reusable PPEs being developed.

India’s Central Pollution Control Board (CPCB) has attempted to track COVID waste disposal by creating a digital tracking system to monitor all stages of its lifecycle (including collection, segregation and transportation) so as to make sure it is disposed of appropriately.  The pandemic has exposed the cracks in regulatory systems and exposed our proclivity for plastic. The future will rely heavily on improving local waste management infrastructure and tracking as well as innovation in sustainable technology.