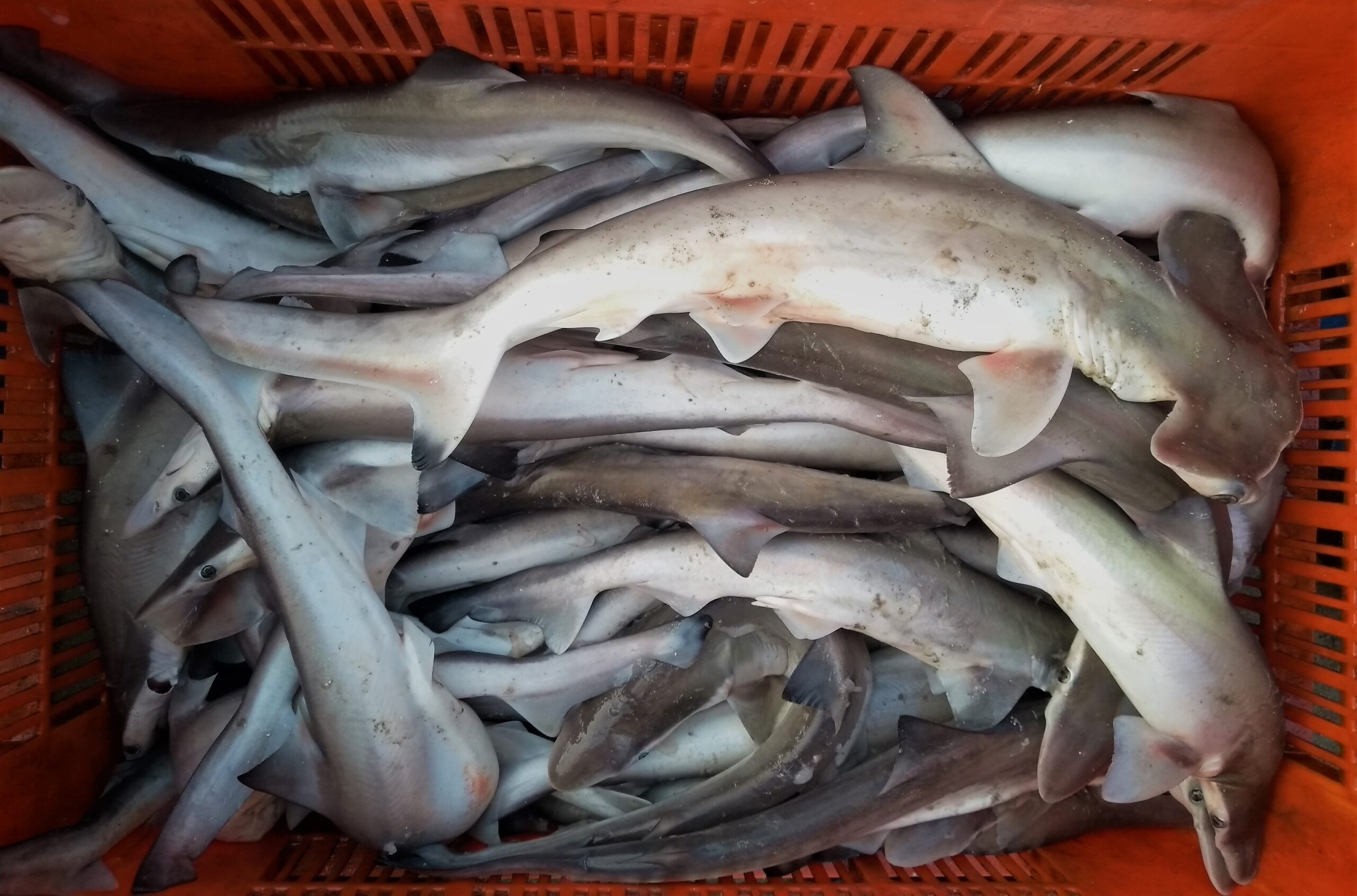 Sunlight glints off the large knife as it arcs through the air and cuts the shark into two halves. The meticulously removes its internal organs, and then proceeds to slice the shark into smaller pieces. “This shark is good for your health,” she says, as she hands over the pieces to the customer.

When I tell people that I research sharks, most are surprised to find out that sharks are commonly found in Indian waters, let alone that India is amongst the top three shark fishing nations in the world. However, a staple fish for consumption and sale, they quietly remain an increasingly important cornerstone of coastal India’s marine environments and livelihood patterns.

This role may be overshadowed though by larger public perceptions of the species. Sharks have been long portrayed as fearsome predators waiting to snatch away any innocent human who crosses their path. The irony here is that while less than 100 humans are attacked by sharks every year, 100 million of these animals are killed by humans annually–mostly through fishing activities. As a result, sharks, and their close relatives rays, have emerged as some of the most threatened species groups in the world.

Under Pressure: The Reproductive Practices of Sharks and Rays

Marine biologist Sylvia Earle recently tweeted, “Sharks are beautiful animals, and if you’re lucky enough to see lots of them, that means that you’re in a healthy ocean!” Clearly, every species has a role to play, and sharks and rays are essential in maintaining the balance of marine ecosystems.

Sharks, rays, and chimaeras are classified as Chondrichthyes, a group of fish whose internal skeletons are made of cartilage rather than bone. Contrary to the popular image of sharks as large, ferocious killers, these animals are actually a highly diverse group, and can be as small as seven inches. For example, over a thousand species of sharks and rays swim the oceans globally. However, over a quarter of these species are currently threatened with extinction. What makes these species so vulnerable?

Unlike ‘bony’ fish, sharks and rays are slow-growing and produce relatively few offspring; this means that they have a limited capacity to recover when threatened from being fished out of existence.

In other words, when fish species like mackerel are captured in fisheries, their populations can remain relatively stable, as they are fast-growing and quite literally produce thousands of millions of eggs. But, many shark and ray species give birth to their young in smaller numbers, not unlike humans. For instance, the manta ray produces a single offspring (known as a pup) over a gestation period of about 13 months.

Because of these reproductive factors, these species face immense pressure from fishing and other human activities in the world’s oceans.

Fins for the Rich, or Food for the Poor?

Historically, human consumption of sharks and rays remained limited because their high urea content gave shark meat a distinct smell and taste. However, sharks have been long hunted for their fins, which are used in East Asia to make a traditional soup that traces its roots back to over a thousand years ago.

The popularity of this dish as a luxury item rapidly increased in the 1980s. As a result, Indian fishers began to target sharks, attracted by the high value of their fins. Between 1980 to 2000, at least 50,000–70,000 tonnes of sharks and rays were captured every year in India.

Not surprisingly, these levels of exploitation were unsustainable. Shark and ray catches began to decline from the 2000s, indicating that their populations were in serious trouble.

“We used to catch 40-50 sharks in one fishing trip” John, a shark fisher tells me, sitting with a cup of chai on Malvan’s beach, in the south of Maharashtra. I’ve been working here since 2017, on the Dakshin Foundation’s research and monitoring projects in the area. “[They used to be] Big sharks, each larger than a grown man. Now, even after several days out at sea, we catch nothing.” As a result of dwindling catches, John retired from fishing three years ago.

However, fins may no longer be the main driver for shark fishing in India. “Sharks and rays are poor people’s food,” says Nisha, a fisherwoman in Malvan, holding a group of bamboo sharks in her hand. By her side is a basket of stingrays, each no bigger than her hand. With fish catches generally declining in the country over the past few decades, these small-sized species of sharks and rays have become important food items for India’s coastal communities. Sold at low prices, they form a vital protein source for the country’s poor. These species also generate valuable income for fisherwomen like Nisha, who sell them in towns across the district.

This poses somewhat of a paradox when it comes to the conservation of sharks and rays. On the one hand, their importance in the food and livelihood practices of coastal communities emphasizes the need for their conservation. On the other hand, their conservation becomes especially challenging due to their socio-economic importance: an outright ban on the fishing of these species is simply out of the question.

That trade-off may not have caught the government’s attention. In 2015, the trade and export of shark fins were completely banned in India to control the fishing of these vulnerable, protected species. However, the occasional seizures of shark fins show that their trade still thrives underground. “Yes, we still sell shark fins separately,” a longline fisher in a harbour on the east coast admits to me. “It’s banned now, but we Indians are very good at managing these things!”

Aside from the fin ban, 10 species of sharks and rays are currently protected under the Wildlife (Protection) Act of 1972–their capture and sale are completely banned. However, targeted shark fishing is a smaller problem today. While targeting prawns, crabs, and commercial fish, trawl boats drag large nets through the ocean that indiscriminately catch everything in their path. Given that these animals are now largely caught as bycatch by fishers, rather than being fished in a targeted manner, banning the capture of specific species can only do so much. Trawlers have been growing increasingly popular for fishing over the past few decades, and now account for more than half of the total marine fish catch in India–which means that sharks and rays are more vulnerable than ever to capture.

Swimming Towards a Hopeful Future

Despite this dire situation, there is still hope for the recovery and survival of these species. Over the past few decades, sharks are viewed less as terrifying predators, and more as icons of conservation. Their ecological importance is increasingly recognised, with greater funding and research across the globe for these species. This can be seen in the declaration of a number of ‘shark sanctuaries’ in ocean regions across the world over the past decade.

In India, though, some out-of-the-box thinking is needed to conserve sharks and rays while balancing the needs of fishing communities.

For example, my colleagues and I at Dakshin Foundation have been stationed in Malvan for the past three years. We recorded high bycatch of these species in trawler boats, and in collaboration with the locals, strived to understand how this could be reduced. We found that stringent measures like closing fishing grounds would simply not work, because they would drastically impact fisher livelihoods. On the other hand, fishers were willing to release juvenile sharks and rays from their boats, if alive, because their earnings would not be affected substantially.

You May Also Like: The Shore Scene: Locked Down In a Fishing Town

These findings are a step in the right direction because they show that conservation can be achieved by working alongside local communities, instead of against them. A number of researchers and organisations are working on sharks and rays in India. Through interdisciplinary research, collaborations, and working hand-in-hand with the fishing community, we can bring these critical species back from the brink of disaster.

The Dakshin Foundation thanks the fishing communities they work with for supporting their research, and the findings in this article. For more on coastal India’s past, present, and future, curated by The Bastion and Dakshin Foundation under “The Shore Scene”, click here.

Featured image: A crate of small sharks captured by a trawler, courtesy of Trisha Gupta. | All names of the fishers in this article have been changed to protect their identity. | Views expressed are personal.