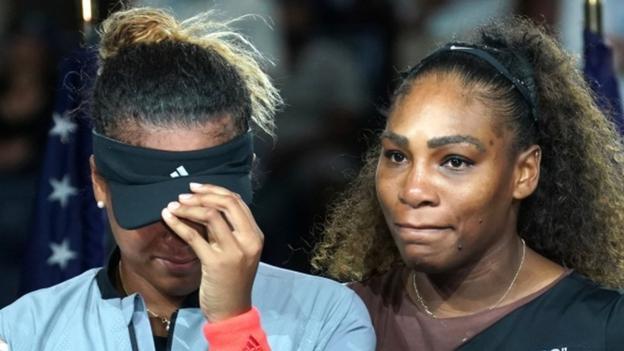 Tennis, a white gentleman’s game for centuries, was revolutionized from the late 1990s by an innocuous debutant, Serena Williams. She entered professional courts in 1995 and has redefined the sport’s standards ever since, winning a record 23 Grand Slam titles along the way.

Often pivoting her powerful image around preventing repetitions of these unfortunate events, she has also firmly established herself as a formidable activist for equality in the sport. Battling opponents both on and off the court, Williams is from all angles, one of the greatest tennis players of all time.

The 2018 US Open Women’s Singles Final, now pegged as a class exhibit of racism and sexism, is being discussed as one of those instances where Williams stood up for women. Under (male) Chair Umpire Carlos Ramos, Williams suffered three ‘biased’ warnings that partially ‘contributed’ to her defeat at the hands of Naomi Osaka.

As commentators rally in support of a ‘slighted’ Serena (while denigrating Ramos to boot), we have to ask ourselves: was this truly a case of bigotry? In a sport that has been frazzled by on-court antics over the years, can sticking to rules of fair play be discriminatory? Most importantly, how do we ensure equality in treatment within sporting arenas?

Williams was first issued a warning by Ramos for illegal on court ‘coaching’ from her box during the second set. Her coach, Patrick Mouratoglou, later admitted to on-court coaching, although he was unsure if Williams had spotted the signal that Ramos’ keen eyes had. Later on, in a press conference, Williams was surprised by Mouratoglou’s admission and maintained she didn’t cheat.

And so, Williams was smouldering about an ‘invalid’ warning, which in the long run, turned out to be fair. This, alongside the tremendous pressure of Osaka breaking her serve in a Grand Slam final, probably caused her to smash her racquet in the second set. She was issued a second warning, for which she forfeited a point, allowing Osaka to break her serve.

Finally, in between games, Williams engaged with Ramos, for the warnings she’d received. Labelling him a “thief” for his actions, Williams demanded an apology for the first warning that had set the ball rolling. Ramos didn’t take kindly to the accusation and issued her third warning — a game penalty of forfeiting one game to Osaka. Now up 5-2 in the second set, Osaka went on to serve for the tournament and become Japan‘s first Grand Slam champion.

Between the Lines: The First Two Warnings

The fact that Williams didn’t see the signal may be true. That it is difficult, if not subjective, to tell what sort of ‘signals’ constitute coaching (and potential penalties) is also true. But in this case, thanks to Mouratoglou’s admission, it seems that Ramos was spot on. Maybe Williams didn’t cheat — but she had to face the consequences of the illegal actions of her team members. If Ramos is at fault, it is because he could have communicated this better, to resolve the situation earlier.

Smashing a racquet is nothing new in tennis, and is one of the few emotional outlets for the isolated players on-court, yet it comes with its own consequences. Beyond displaying unsportsmanlike conduct, a smashed racquet could injure linespeople on the court or members of the audience.

Failing to curtail the practice also often allows for sustained unpleasant on-court behaviour to continue (most famously championed by John McEnroe, as seen above). Source

So, for the sake of the sport and its spectators, everyone gets a warning: be it 19-year-old newcomer Alex De Minaur, or 36-year-old champion Serena Williams. Ramos again was just following a preventative precedent grounded in an unpleasant history.

Perhaps Ramos’ actions were sexist; men have gotten away with colourful outbursts in the past, although the sport’s rules specifically discourage such behaviour. That Ramos chose to penalize Williams, could potentially be suspicious, given recent events in tennis.

The umpiring at this year’s US Open has come with its own fair share of controversies. Alize Cornet received a wildly biased warning for taking her shirt off mid-match, a privilege that male players enjoy without disruption. On the other hand, another umpire actually got down from his chair to ‘encourage’ a temperamental Nick Kyrgios to play better during one of his matches. Williams herself faced criticism from French Open officials earlier this year, for wearing a custom-made, lifesaving catsuit, as opposed to more ‘traditional’ attire (the catsuit was later banned by the tournament). Beyond being dismayed at these absurd outcomes, fans and commentators alike remained stymied as to how to reverse these visible biases. The US Tennis Association has agreed to revisit these decisions, to ensure fair-play in the future.

If Wawrinka can don funky (to say the least) outfits on the same courts without reprimand, Williams should be able to too. Similarly, if Wawrinka smashes a racket and receives a penalty, in the same scenario, Williams should receive one too. The answer seems to lie in simply applying the same rules (whether informal or not) to both men and women, regardless of one’s own personal preferences. Only then, can the gendered discrepancies in ‘fair-play’ improve.

Bit embarrassing for Stan #Wawrinka having to play the #FrenchOpenFinal in his boxers after forgetting his shorts. pic.twitter.com/mBfFQoAziX

The irony here is, Ramos actually stuck to those values. He made the right (rule-book based) call initially, penalizing Williams the third time when she called him a “thief” and a “liar” based on those decisions. Had he not, he would forsake his own professional integrity, not to mention the rules of the sport. Now that he has, he is being accused of sexism, racism, and a pedantic adherence to the rules, all apparently costing Williams ‘her’ 24th Grand Slam title.

The learning experiences from this US Open Final are clear. Umpires should be asked to clearly explain their decisions in the future, while professional bodies should re-examine the parameters of identifying ‘coaching’ during a match. Most importantly, umpires should be forced to conduct themselves as professionally as Ramos regardless of the match they preside over, for the sake of standardizing the game across genders.

Male players do enjoy privileges in tennis that are rooted in gender biases; Williams and her fellow sportswomen must call out injustices when they do occur. But if Ramos didn’t make arbitrary decisions, then Williams’ outspoken protests here, are simply unfounded and the $17,000 USD fine issued by the tournament is justified. As women’s rights are used by one of the greatest athletes of all time as a smokescreen for her poor temperament on Saturday, Osaka’s own remarkable achievement in women’s tennis fades into the darkness.