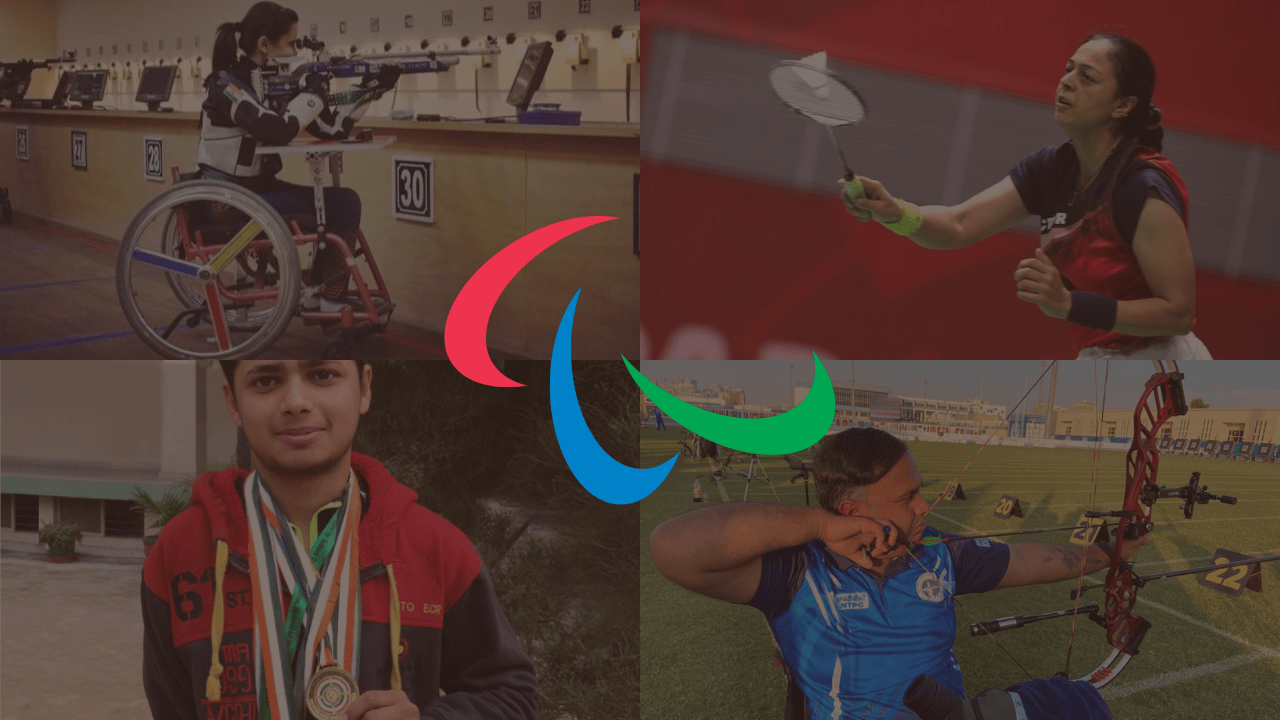 There are always those “facts” we’re made to listen to, which perpetuate certain stereotypes and misconceptions. When it comes to sport, one of the most repeated facts is that “age plays a big role” in sporting prowess. While there is some truth to the belief, pundits and fans have often underestimated athletes because they’re “too young”, or “past their prime” when performing on the biggest stage. But breaking stereotypes is inherent to sport’s allure; history lends itself to this fact.

India’s paralympic athletes have proven themselves in this regard, becoming champions in their own right. Bereft of challenges and misperceptions, these para-athletes’ journeys were arguably much more delicate to manage, needing careful management and resolve.

Every once in a while, there comes along an athlete whose career lasts a lifetime. Para-Badminton player Parul Dalsukhbhai Parmar is one such athlete. Hailing from Gandhinagar, Gujarat, Parul was afflicted with polio at the tender age of 3, but she never let that hamper her passion for badminton. Now 47 years old, Parul is still the number-one ranked Para-Badminton player in the SL4 category, winning medals at some of the most prestigious international competitions. In June, she qualified for the Tokyo Paralympics on account of her international ranking. Parul is a true phenomenon, with only two other players ranked in the world’s top 10 being older than her, as she sets her eyes on bringing home a gold medal for India.

Through GoSports Foundation, Parul has been supported for her competition expenses, nutritional requirements and physiotherapy, with the latter two being specially curated keeping in mind her age and the stage of life she is at. She has won two gold medals at the World Championships, as well as two gold medals at the Asian Para Games, with more yet to come in what is already becoming a legacy.

Sometimes, an athlete’s journey may not tread a traditional path, although they end up being world-class performers in their field. 45-year-old Para-Taekwondo athlete Veena Arora has faced some extremely tough challenges to reach where she is today. Unlike many para-athletes, Veena’s disability was not present at birth. Instead, an unfortunate incident when she was 22 led her arm to be amputated, owing to the wrongful administration of an injection. Before taking up Taekwondo, Veena actually had a promising career in athletics, representing the nation at the 2014 Asian Para Games, before deciding to switch to Taekwondo. When she switched sports, the expectations people had were slim, because she was a late entrant. Veena set aside the noise, believed in herself, and is now an international medallist, winning in Canada and Australia, while beating athletes much younger than her.

GoSports Foundation supported Veena for her competition expenses and nutrition, as well as for home gym equipment during the Covid-19 pandemic, with the Foundation facilitating interventions for her as per her age and life requirements.

For 35-year-old Kashmiri Para-Archer Rakesh Kumar, the “better late than never” adage could not be more fitting. In a world where people say that sport should be picked up at a younger age, Rakesh has chartered his own destiny. In 2009, Rakesh was the lone survivor in a horrific car accident that left him wheelchair-bound for life. Unable to find any meaning in his life for years, Rakesh finally found his true calling in 2017 when his current coach invited him to his archery academy. From there, Rakesh has never looked back. Having taken up the sport at the age of 32, he has performed incredibly well to become one of the best para-archers in the world, currently ranked an impressive 13th. In 2019, he won a bronze medal at the Fazza World Ranking Tournament in Dubai and in the same year, he also won a quota for the nation for the 2021 Paralympics. Such achievements seemed impossible from the position Rakesh was in earlier, and wouldn’t have been possible if he second-guessed himself based on his age.

With his story being a testament to the power of sport in changing lives, GoSports Foundation selected Rakesh for their Para Champions Programme in 2019. His archery equipment kit, a customised wheelchair, nutritional requirements, psychology sessions and a monthly stipend are all being taken care of. Being a late bloomer in sport, Rakesh’s support structure had to be carefully designed to enable him to perform his best during competitions, and also rest and recover well whilst at home. Now, the future looks bright as he looks forward to the Tokyo Paralympics to be held in August this year. Speaking about how important an effective support structure is for an athlete entering sport at an older age, Rakesh says,

At the age I started my sport, practicing professionally can be very challenging. Having the right support system like coaches, psychologists, and nutritionists play a pivotal role in motivating us to perform better and pushing us to do our best irrespective of our age.

Age is a Two-Way Street

Just like older athletes, there are some incredibly young para-athletes who have become world-beaters despite their extremely young age, proving that one is never too young or inexperienced to be a sporting champion.

Para-Shooter Avani Lekahra is one of India’s brightest talents in the Paralympic circuit, at just 19 years of age. She suffered a car accident in 2012 which permanently affected her spinal cord. In 2015 she decided to take up shooting, inspired by her hero, Abhinav Bindra. Despite being so young, she took to the sport like a duck to water, winning gold medals at the National Championships in 2015 and 2016, followed by a silver medal at the IPC Para Shooting World Cup, Dubai, in 2017, which was her coming-of-age performance. In 2018, she set a junior world record at the World Shooting Para Sport Championships in Korea, and one-upped that by securing a quota for the Tokyo Paralympics in 2019, at the Al Ain World Shooting Para Sports World Cup. Avani is at an age where she can still compete in junior competitions, but her maturity and talent has seen her do extremely well in senior competitions.

GoSports Foundation tracked her talent till 2018, after which was supported by the Para Champions Programme. It covers her rifle, equipment, and most importantly, her high-performance training stints in Mumbai. For young athletes, it is essential that they receive the best guidance and mentorship. “When you start competing, you come to realise that eventually, it is not about who you are competing with, but [about] how confident you are about your process,” says Avani, on how she is unfazed by the greater experience her older competitors have. “When I played my first World Cup final, I was the youngest [at 15], and there was a shooter from Great Britain who was 50 years old. Right from then, I realised that I just need to do my best, irrespective of who I’m competing with. Experienced athletes are who they are because of what they have achieved in the past, but in the present, we all are competing for the same medal and I just try to trust my ability.”

Avani’s compatriot, Manish Narwal (19), is another young para-shooting prodigy. He was ranked 13th in the world at the age of just 16, making him a generational talent, and from then, he’s been on a juggernaut. 2018 was a great year for him, as he clinched India’s only gold medal from the shooting range at the 2018 Asian Para Games, breaking the junior world record in the process. When he was just 17 years old, he won a spot for the Tokyo Paralympics back in 2019; his talent, ability, and desire to win has made him a potential medal prospect for India at the global event.

Also supported by the Para Champions Programme since 2018, Manish has been provided with a personal shooting range by the Foundation, with pistols and accessories, so that he can continue to defy the odds.

In the journeys of all these inspiring athletes, the Para Champions Programme has played a pivotal role in changing the narrative around differently-abled sports and its athletes by providing the right support system to build champions on and off the field. The programme, instituted in 2015, supports 46 of India’s emerging and elite differently-abled athletes, and is funded by IndusInd Bank and Sony Pictures Network India, through their Corporate Social Responsibility initiatives.

India’s Paralympic talents truly are prime examples of why age is just a number in sport, and no athlete should feel restricted or confined due to their age. Sports has the unique ability to negate other external factors of life and give everyone a fair chance at success. More than anything, hard work, determination, and a will to win are essential to succeed, but having the right support system and entourage can take athletes to world-beating levels. Some, especially because of their age, require curated support to achieve excellence. Foundations like GoSports continue to scout, support, and produce sporting champions across different ages and disciplines, in the interest of India developing as a sporting nation. Some of these Paralympic athletes, set to represent the tricolour at Tokyo, are role models and living examples of the fact that age is really just a number.