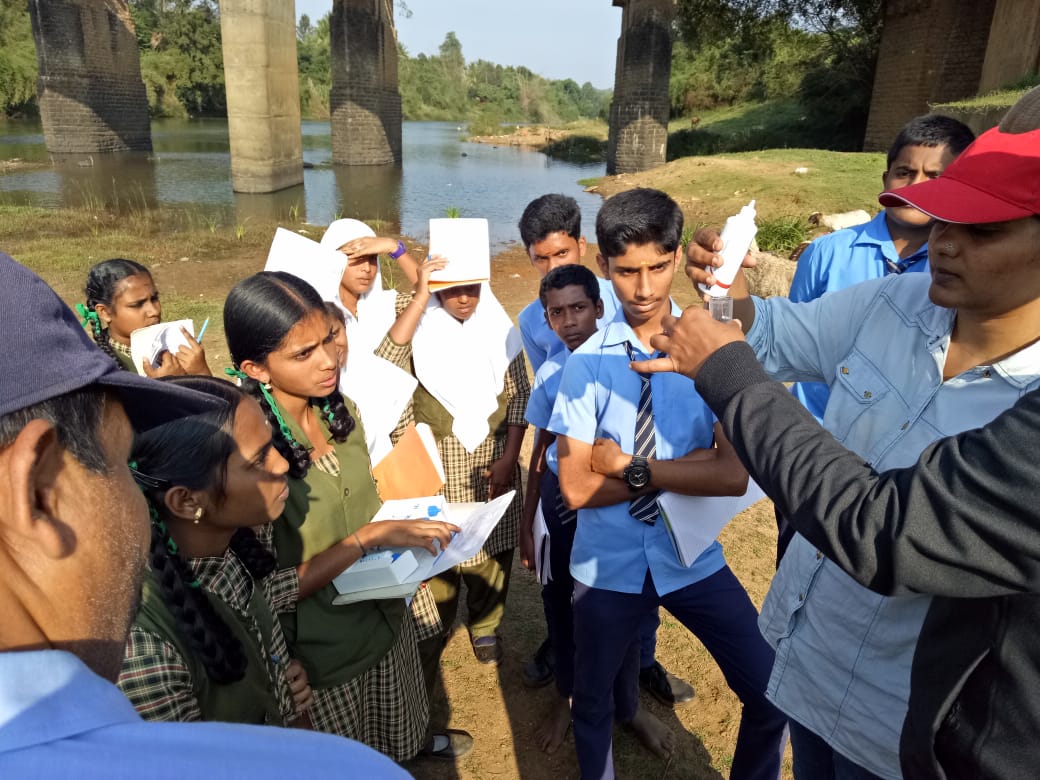 In mid-October every year, holy water is believed to spring at Talacauvery, nestled in Karnataka’s Kodagu district. This site is famously known bas the river Cauvery’s place of origin. “When the water springs, the locals celebrate Kaveri Sankramana, where they offer prayers to Goddess Cauvery for continuing to bless their land and homes with Her water,” The Bastion’s Chief Editor, Chirag Chinappa, tells me on 17th October, the day the festival fell this year.

For the last three years during the monsoons though, this local deity has been flooding, submerging low-lying areas near it. This year, between August 1st and August 11th, Kodagu received 647 mm of rain, accompanied by red warnings issued by the Indian Meteorological Department (IMD). At least 52 areas in the district were affected by the floods, and 14 were marred by landslides.

“Rains which earlier used to be spread out over two to three months of the monsoon, from June to September, are now lashing out over Kodagu in just two to three days,” says Neethi Mahesh, Conservation Consultant at WCS-India. “It is worrying because this unpredictable rainfall pattern seems to be the new normal and doesn’t leave much space for preparedness [amongst the locals].”

Inaccurate flood forecasting data only makes the problem worse. An accurate flood forecast is when the forecasted flood level is around +/- 0.15 m of the actual level. But between 2015 and 2019, government data shows that while the practice of flood forecasting has increased, its accuracy has consistently fallen from 98.01% in 2015 to 86.64% in 2019. Together, these factors leave blindspots in flood management, deterring authorities from quickly responding to flooding situations.

In a move towards enabling stronger flood-preparedness, Neethi Mahesh, with support from The Habitats Trust, recently launched a smart-phone based application and website, Our River Our Life. The app allows a user to monitor the health of rivers, while the website offers a real-time flood mapping system, called Flood Watch.

The aim at the heart of Our River Our Life is to involve the general public in uploading what is usually considered scientific data—a common trend in ecological assessments known as ‘citizen science’. The website’s Flood Watch component allows a user to sign in to an account, document their location, and fill in information on the flooding levels at their location, along with photos.

These micro, local, and real-time data points can be very beneficial for the administration and those affected by floods. “Our current satellites make it possible to generate images that have a spatial resolution of approximately 1 kilometre,” says A.K Mitra, Scientist E, at Satmet-New Delhi. Mitra’s department at IMD provides timely spatial information—one of the many components that help in flood forecasting—to district administrations and model forecasters.

“We need to make this information even more localised. The GISAT-1 satellite has a near-InfraRed imaging sensor with a resolution of up to 42 metres, making localised weather conditions more visible on satellite imagery. This will have many functions, including enabling more accurate flood forecasting.” The GISAT-1 was set to take off this March from Sriharikota, Andhra Pradesh, but the launch was cancelled due to technical reasons. At present then, flood forecasting in India is not at its most accurate. While an app like FloodWatch may not be able to forecast floods, it can help to monitor real-time depictions of on-ground realities on a yearly basis. In effect, it will accelerate disaster preparedness and flood response during monsoons.

The Energy and Resources Institute (TERI) also launched an application earlier in October with a similar purpose, albeit without the citizen’s documentation. Created for the city of Jorhat in flood-prone Assam, this Flood Early Warning System (FEWS) predicts urban floods by issuing warnings about flash floods or heavy rainfall with a lead time of 72 hours.

“Assam faced three waves of floods this year which impacted 30 districts. These tools are essential for risk mitigation and to expand the regional disaster risk reduction efforts of cities in Assam especially those located at [sic] the banks of the Brahmaputra River,” said Jishnu Baruah, the Additional Chief Secretary, Government of Assam during FEWS’ online launch. Alerts from the app, then, arm the decision-makers and administrations to take necessary actions well in advance.

You May Also Like: African Swine Fever, COVID-19, & Floods: How NGOs & Volunteers Are Organising Relief During Assam’s Triple Crises

But, Our River, Our Life goes beyond creating better flood-related data. “The app available for smartphones gives people a chance to tell their stories and experiences about the health of rivers close to them,” says Neethi. “And this is important. After all, the river’s health, urbanisation, habitats surrounding it, and flooding—all of this is inter-related.”

The app, available for download for free from the Playstore, requires registration with a mobile number. Then, the user has the option to fill in data points that can help monitor a river—the water levels, weather, water quality testing, flora and fauna, and the type of land use around the river. This brings visibility to the ground-level situation, while taking into consideration the user’s experience of their surroundings.

Some of the first experimenters collecting and documenting information on the rivers around them using the app have been grade 8 and 9 students. Under their Eco Clubs, students of Kodagu Vidyalaya, Madikeri, chose to work upon the project “Reviving River Cauvery.” This required frequent field visits to the shores of the Cauvery, where they observed the surroundings of the river, and also sampled the water quality with Neethi’s help. During their project, they found interesting variations—while the Cauvery at its source near Talacauvery was pure, a few kilometres downstream, the tests showed that the water was contaminated. One major source for this pollution, the students found, was the untreated sewage being let out into the many natural streams flowing into the Cauvery.

“This is why it’s important for citizens to participate in such ground-level documentation,” explains Neethi. “Rivers, in general, are vast bodies, and their water quality is influenced at all points by some human activity. But, documenting it all will reveal the status of its health [across the river].” Localised data points on the quality of the river can help shed light on all the problems contributing to the larger pollution problem of the river, accordingly, making finding solutions easier.

“An app like this is very important for the students,” says Shilpa, a former teacher at Kodagu Vidyalaya. “Many times, we took our findings to the administration and their responses were not very encouraging. The students would get disappointed. But, with the app, they know that they can upload their results to promote it, which can later be used by a researcher, a scientist, or a practitioner.” At present, Shilpa is busy adding the data points collected by students into the app.

Better regional development was also one of the objectives of another tool that TERI launched with FEWS in October. TERI Climate Tool is a database to help prepare decision-makers to be prepared for the changing climate. Upon signing up, a user can explore and learn about India’s changing regional climate profiles of the past and even the future till 2050—this information can trace out climate vulnerabilities and risks thereby shaping decisions on development plans. “With reference to the past, the tool shows how temperature or rainfall would change in the future, giving us a spatial representation of the same. It allows the user to go down right till the district level,” said Saurabh Bhardwaj, a Fellow at TERI during the Tool’s launch. “It has huge potential in aiding climate-related sectoral planning for the agricultural and water sectors.”

Challenges Along the Way

All citizen science projects face a common threat: how robust and credible can data collected by citizens—who aren’t trained scientists—be? Our River Our Life is no exception. But, the app developers are aware of this and are prepared to validate its scientific rigour. “All the different parameters that the app helps to document, from the PH value of water, to its alkalinity, to chlorine, iron and dissolved oxygen present in it are correlated,” Neethi explains. “So, if we see one value that seems questionable or unexpected, it will be easy to cross-check its validity by looking at the other values entered. If we find a discrepancy, we hope to trace it back to the citizen who recorded it, for the app requires a contact number to be listed.”

Another source of apprehension is if users would make use of the water quality feature—one of the most important markers when determining a river’s ‘health’. “It is easy to mark out the rest of the information like water level observed in the river, weather conditions, and the land-use around it. But, will users really purchase the kits to measure water quality? We don’t know yet,” says Neethi.

To encourage people and make water quality testing seem less intimidating, the website has a repository of information on which field testing kits can be purchased, India’s various water laws, and guidelines for monitoring, thus complementing the river monitoring documentation that the app allows for.

Our River Our Life aims to raise awareness and bring citizens together to take action on a local issue. In the app’s future lay conversations with planters in Kodagu to help centralise and digitise rainfall data-documentation systems. Apps like these help cover the gaps present in current systems, creating repositories available to be used by citizens, students, researchers, and scientists—basically anyone with a smartphone and an Internet connection.