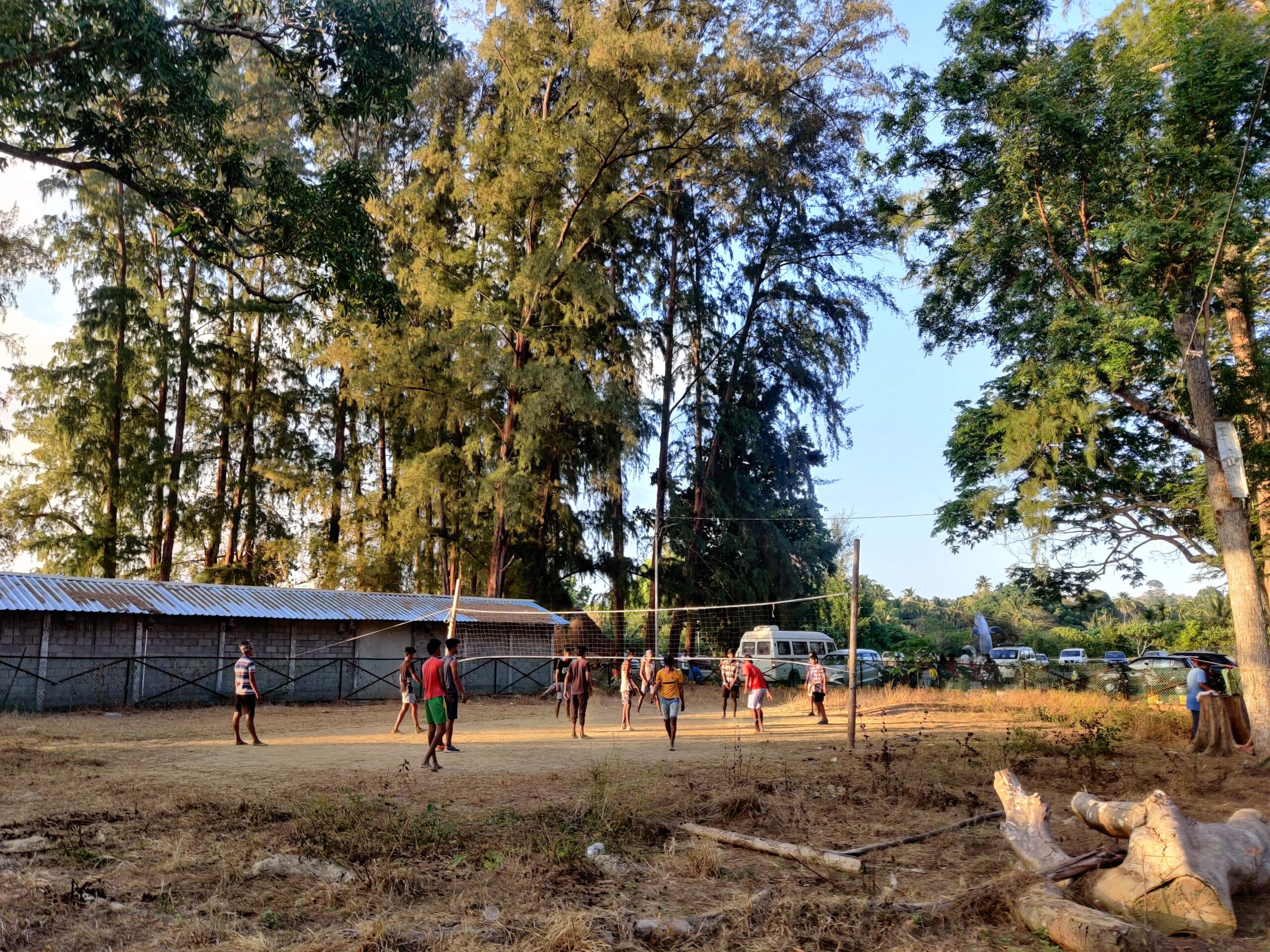 The last three decades have borne witness to a changing landscape across the ~7000 kms of Indian coastline. The rapid industrialisation and mechanisation of the fishing industry has created an unsustainable environment for small-scale fishworkers. They increasingly find themselves being marginalised in the same waters where they were once so used to plying their trade.

This has had unfortunate consequences in many coastal fishing communities. Among them, the unsustainability and lack of profitability in the sector has resulted in a decreased interest amongst the youth towards both fishing and the natural environments that surround them. This is compounded by a lack of relevant and place-based environmental education in these spaces. Now, communities across the coastline are moving towards urban spaces, or are transitioning towards livelihoods and occupations that are mostly removed from the natural environments. Conversations and interviews conducted in the field with communities indicated a decreased interest in fishing as other livelihood opportunities—such as those in the tourism sector, at least pre-COVID-19—were viewed as more lucrative and profitable.

Dakshin Foundation’s sports programme under its ‘Community Wellbeing and Environment’ initiative aims to address these gaps. Through sports, it aims to encourage and empower youth from fishing communities to engage in and support social issues in their own communities and (re)build deeper connections with the natural environments that surround them.

One of the first steps in the initiation of this project was a scoping study at our pilot sites—in Wandoor and Junglighat in South Andaman Island—to introduce the programme to the local youth, and to get a sense of their current levels of access to sports, play, and recreational facilities. The findings from this study threw up some interesting results, as it found that there was no shortage of enthusiasm for sports and outdoor activities; but, at the same time, youth and children in these areas were limited by the facilities, equipment, and support provided to them. Several respondents argued that more sporting opportunities for youth would be more than welcome, and would also provide them with opportunities to potentially participate in sports competitively, while also boosting skill sets that they could use in other walks of life.  These findings highlight the potential of the burgeoning sports-for-development sector in India, as well as the challenges faced by it.

Sports is not a panacea

In India, social dynamics like caste, class, and gender strongly shape interpersonal relations. In fact, studies have shown that caste, gender, and linguistic and regional identities of participants affect their levels of involvement in play and recreational physical activities in general. In this context, the scoping study  aimed to understand if the youth in these spaces were affected by these various parameters in their efforts to participate in sports.

A major (and predictable) issue that was raised pertained to insufficient support, facilities, and equipment for recreational sports. Yet, crucially, issues of inequitable access to chances to play were raised as well. While caste did not visibly influence differences and inequalities, gender, linguistic, and regional identities clearly did.

On the field, there was a glaring absence of young women and girls present in sports and play avenues outside of schooling environments, as they were instead expected to either focus on their studies or help out with chores and work in their houses. All the female respondents mentioned that they did not feel comfortable playing outdoors with the boys as they did not want to stand out. However, they were involved in sports and games in their schools, where they were provided with a relatively safe and controlled environment where they could express themselves.

Regional and linguistic identities also played an important role. In Wandoor, in the South Andamans, the village population largely consists of families who historically migrated to the islands from three different communities and geographies of the Indian subcontinent: Ranchi, coastal Tamil Nadu and West Bengal, and Bangladesh. While this was not a significant factor inhibiting interaction on the playing grounds—youth from these groups played together and developed relationships with each other regardless of their backgrounds—they clearly identified themselves as members of these different communities. A more detailed study would be required to understand if these differing identities had any other impacts on their lives in the contexts of their day-to-day lives and livelihoods. Developing a more comprehensive understanding of these issues and how they manifest would be critical in working towards addressing the wellbeing of these communities through sports.

Given the challenges faced by marginal communities described above, a well-designed sports-based community wellbeing programme has the potential to  provide youth with spaces where they can enjoy themselves recreationally and also learn and pick up skills that could prove to be useful in any of their endeavours in their lives. There are numerous other initiatives across India that use sports as a platform to provide youth with pertinent life skills such as teamwork, relationship building, cooperation, and self belief, which would all empower them in whatever walks of life they choose. Organisations like YUWA and Project Khel, operational in Jharkhand and Lucknow respectively, use sports as a platform to overcome social stigmas and gender barriers, spread awareness about menstrual health, and also combat child sexual abuse. Several other organisations like Bay of Life and Magic Bus Foundation use sports as an initiative to foster connections with the environment and train youth and children in life skills.

These life skills components are a significant proposed element of Dakshin’s programme, but in addition to this, there are plans to use sports as an avenue to build richer connections with the natural environments around them. Earlier this year, we wrote about how Reef Log, a citizen science programme, incorporates environmental conservation into scuba diving tourism. Such initiatives have gained interest given the increasing concern for ocean health amongst people who take up recreational diving actively. Along these lines, alternative sports like surfing, scuba diving, and outdoor climbing have the potential to enable the youth to actively explore outdoor and natural environments and foster connections with these spaces. Activities like nature walks, bird watching and treks can also be incorporated into the activities to provide the participants with more opportunities to directly interact with and learn about the natural environments that surround them.

The importance of the participatory nature of this programme cannot be overstated. The scoping study also served the purpose of breaking the ice with the youth from these communities, understanding the issues that are pertinent to their lives, and how these sports-based initiatives could make a difference in a way that’s conducive to their growth and development as they see it. The stakeholders and communities in these spaces need to be involved in these decision-making processes.

Despite the power of sports to unite, there are certain caveats to consider while designing such programmes. The first is that no activity would have an immediate impact on its own without efforts to effect change in the longer term. In order to facilitate and address this, participants need to be equipped with skills that empower them to become agents of change. This can be achieved through a “train-the-trainers” model of activities, where youth from the community are trained to run similar programmes and facilitate training on their own, which will also help scale the programme to other geographies and regions.

Coastal communities are socio-politically complex with a wide range of stakeholders including fishers, tourism operators, tourists, environmentalists, and local residents. Given  the various social and traditional differences, this creates an incredibly complex and diverse space to navigate in any context, where skills like cooperation and the ability to work together are extremely valuable. Playgrounds and sports fields are spaces where people from various backgrounds can come together and find common ground on a level playing field, and this could help them overcome these differences and come together to work for the betterment of their communities. There are several initiatives where organisations have used sports towards these goals. For instance, the formation of a women’s football team in Dharamshala has helped the team members overcome some of the trauma and stigma they face as not only Tibetan refugees, but also the social issues that they face as women. One All, based in Tamil Nadu, has tapped into the mixed-gender nature of Ultimate Frisbee to bring boys and girls onto the same playing field, and use the sport as a platform to encourage players to overcome gender barriers.

Little has been possible in the field over the last year due to the pandemic, and much of Dakshin’s work has focussed on providing relief and other support. With the Olympics finally underway in Tokyo, and a sporting spirit spreading across the world, Dakshin hopes to launch its sport and environment initiatives in the near future.