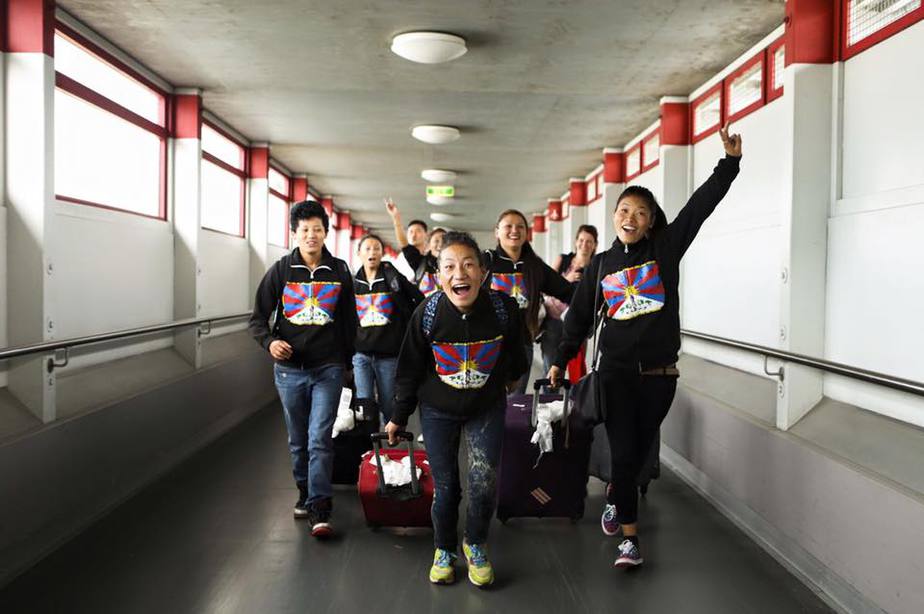 “I don’t remember much; it was about 14 years ago, and I was 7. One day, my parents told my elder sister and me that we had to leave, to go study in a better place. At that point, I could not understand where exactly I was going. With some of our parents’ money in hand, we left Kham Dagyap with a band of unknown fellows. Much like owls, we were awake and travelling by night and sleeping during the day. Travelling at night had a lesser risk, a smaller chance of getting caught. I remember losing almost everything we brought from home; I had six or seven small things, but I lost all of them on the way!

We finally reached Nepal, and through a route well known now, we ended up at a home that helps people like me relocate. We were there for two months or so, before we came to Delhi, and then eventually to Dharamshala.”

The captain of Tibet women’s football team, Jamyang Choetso’s story as a Tibetan refugee in India is emblematic of the struggles faced by refugees across the world. Accounting for about 1% of the global population, most refugees are forced to leave their homeland because of rising internal conflict, terrorism or persecution.

There is a palpable sense of insecurity towards these rising numbers, with several countries shutting themselves to refugee-seekers. For those that do end up accommodating refugees, a few big questions arise; how can this new community feel safe and secure? Integrating with their immediate societies is a sure-shot starting point.  But how can they build their futures in a foreign land?

More Than Just a Game

“When I first came to India, it was hard to fit in! Us Tibetans are a shy bunch. We usually keep to ourselves, are soft-spoken and very different from everybody here. But Football changed that for me. When I started playing in school, not many girls played, and I really really liked the sport, so I played with the boys!

Football has made me a more confident person, and it’s really improved my public speaking skills. Because of this, I started mingling a lot more with people from the local community and made a lot of friends. Now, I have friends in almost every part of Dharamshala!”

Ever since the 14th Dalai Lama came to India after what was a failed uprising in 1959, more than 150,000 people (now reduced to approximately 85,000) have made the journey across the Himalayas to settle in Dharamshala, Dehradun, Mussoorie, Delhi and other cities. Jamyang points out that despite the relatively large community, the barriers faced by refugees in building lives away from home are diverse in their nature. These range from the language gap and culture shock to more everyday niggles like food, adjusting to the climate and maintaining contact with family back home.

This burden weighs heavier on women. “Tibetan women are often forced to depend on men for survival, many entering into relationships solely for this purpose. Alcoholism, drug addiction and domestic violence are severe problems within the Tibetan refugee society… women receive little or no support from the Tibetan government-in-exile or the Indian authorities in these matters”, says Cassie Childers, the founder of Tibet Women’s Soccer, in an interview with The Bastion.

While the fundamental support systems for refugees revolve around basic requirements of roti, kapda, makaan (food, clothing and housing), sporting activities has been found to add great value in other spheres. Whether it is providing a platform that fosters healthy interaction between the refugee and local communities or enhancing individual attributes like confidence and social skills, sport is rising to the challenge of bridging nationalities.

Cassie Childers says, “For many of our participants, it was a rare opportunity to have fun, and run outside and shout, behaviours not easily accepted as being appropriate for women in traditional Tibetan society. For the players that could go on to play for Tibet, they were finally able to do something for, and represent their country.”

Sport can also develop real-life skills. For instance, Spirit of Soccer provides Mine Risk Education (MRE) through its football programmes. The organization identifies the most at-risk areas and engages with youth in schools and refugee camps to deliver MRE. Currently active in Laos, Colombia, Lebanon, Iraq, the Jordan-Syria border and Moldova, more than 250,000 students have benefitted from their programmes.

In a paper on the impact of sports on social inclusion in Australia, Block and Gibbs (2017) find that having refugee-youths playing with mainstream clubs “had the additional capacity to directly support the development of bridging social connections likely to be particularly critical for promoting inclusion.” Several sporting governments and bodies have taken cognizance of such findings, and have actively begun to utilize sports.

Building Bridges, One Kick at a Time

“When I played for my school, I was seen by Tibet Women’s Soccer, Cassie Childer’s organization, and asked to join. From there, I went on to become a part of the national team. It means a lot to be a part of this team, even more so to captain it. Putting on this jersey and stepping out onto the field gives me a huge sense of pride. I can put my country’s name out there, give it some standing in the world. I play because of the love for the sport, and representing my country is an added bonus. We even went to Canada a couple of years ago to play a tournament, and it felt amazing to be wearing a jersey with Tibet written on it.”

In an age of ‘us vs. them’, it is encouraging to see sports bodies at all levels play their part in providing for refugee communities.

The 2016 Olympics was the first event ever to host a refugee team, with the athletes marching under the Olympic flag. Further, before the 2018 Winter Olympics, the IOC and UNHCR launched a campaign to provide electricity to 55,000 refugees in camps around the world. The Olympic committees of individual countries are also putting in a shift; for instance, New Zealand organized an Olympic Refugee Sports Day, with over 300 refugee children who got to take part in a variety of sports that they otherwise might not have gotten a chance to.

Although popular global sports like Football have been used widely to support integration, several countries are going one step further and are building sports that are otherwise unfamiliar to their natural sporting culture. Take Sweden for example. At last count (in 2015), with a little more than 40,000 Afghan refugees, Cricket in the Scandinavian country is going through a boom, with over 70 cricket clubs presently operating in the country. It is also being used as a tool to diffuse anger directed towards young Afghan refugees.

A Means to an End

“If I could go back to Tibet, I would love to do what I can to help the people. Especially the women, because they don’t have great access to education, and are married off at a really young age. I want to teach them how to look after themselves, and build a life of their own. I also want to put what I’m learning as a nursing student right now to use, and improve healthcare facilities. But mostly, I want to create opportunities for the people to do better and improve their lives!”

We already know that sports are leisurely activities, meant for entertainment. Simultaneously, it has and will continue to be recognised as a powerful vehicle for skill-building, inclusivity and growth. A treatment for many marginal communities’ ailments, sports in India can bolster aid, in all its different forms, for those who need it the most.

Sports can be especially helpful in India, for the subcontinent is no stranger to refugees: Tibetans like Jamyang, close to 40,000 Rohingyas, 200,000 Afghans, 130,000 Sri Lankans and more than 50,000 members of the Chakma and Hejong communities have settled in the country. Although India has opened itself up to these populations, for some, their residence in India continues to remain contentious.

The recent uproar surrounding the citizenship and identity of refugees who fled East Pakistan during the buildup and in the aftermath of the 1971 war is a case in point. Popularised by leaders aligned with the Centre, in Assam the Citizenship Amendment Bill’s notoriety partially rests on its discriminatory stance towards Bangladeshi Muslim refugees. Locals state that the continuous influx of refugees and illegal immigrants has led to a change in the traditional religious and ethnic social fabric, making them minorities in their own homeland. This issue has been a driving force behind several cycles of violence, including the 2012 Kokrajhar riots in Assam, that saw the deaths of more than 80 people.

Such issues are complex and sensitive, and such violence often seems inevitable. Yet, these passions are often stoked by larger political forces in India, and the desperations of those living in a resource-scarce country. These influential factors worsen the potential for productive inter-community dialogue on northeast India’s changing social landscapes. Instead of protesting the arrival or settling of refugees, which is already a reality in the region, learning how to engage on an everyday basis with these newly established communities and cultures is a crucial step in building cross-cultural conversation.

In this particular case, it is by no means the first or most suitable answer, because it doesn’t address the core issues. But it can still play a delicate, if not definite role in building some semblance of unified communities. The fact that the northeast already has a rich sporting culture — Boxing, Football, Athletics and — plays well into this situation. Further, a 2016 study by Dr. Anil Mili finds that locals believe sport to be integral to community life and that it is helpful in “curbing the menace of drug addiction, HIV, alcoholism, terrorism, etc.”, especially in the youth.

There is no saying when the global refugee crisis will end, if at all. But communities and countries would be amiss to exclude those who require help the most; the best part about democracy is that it relies on the strength of its freedom, opportunities, and diversity. While countries around the globe claim to be strong democracies, this refugee crisis is probably the truest and toughest test of their ideals. And sport may just be the key to pass.