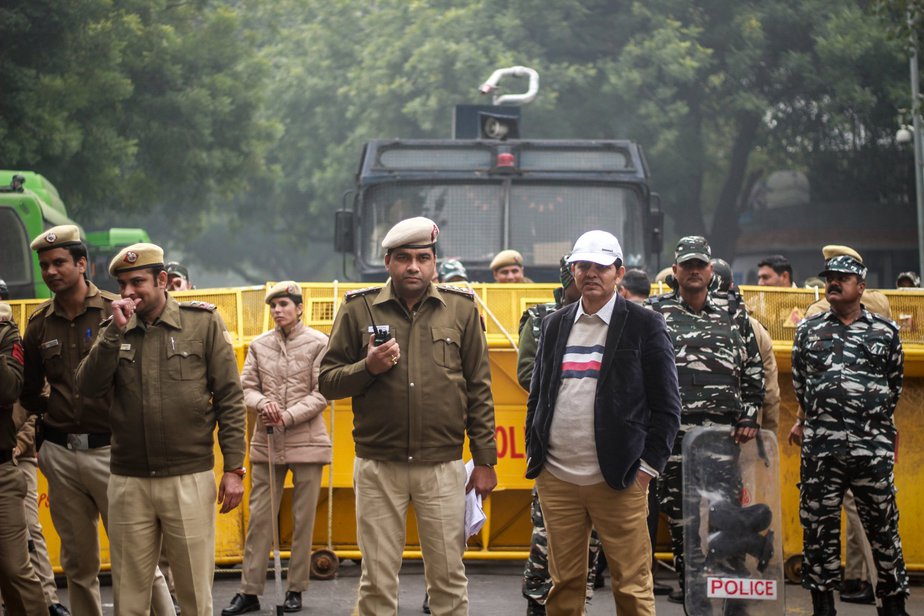 “It’s blatantly obvious isn’t it? They’ve been badgering us for so long — they’ve tried changing the way we learn, tried to control our administration, tried to cut funding, and now they try to break us by bringing religion into it? How dare they. We won’t stand for it. Not just here in my university, but across India. They will be forced to take this seriously”

As the tea in our hands provided some sense of warmth in Delhi’s biting winter, Hamid’s unease poured out of his eyes. It’s no wonder that he feels this way, having witnessed a barrage of officers storming through his university gates and attacking his college-mates. “Zindagi mein kabhi kabhi hi hoti hai aise cheezein (These things happen only a few times in life). I doubt we’ll see any other time like this, where students across the country are protesting.”

These students that Hamid speaks of are all marching against the enactment of the Citizenship Amendment Act (CAA). With protests taking place continuously across the country, six states have already rejected implementing the act.

Till now, the image the government is trying to put out is one of students not really being a force to be taken seriously enough.

This is clear through the numerous times the political leadership has refused to count this agitation as a genuine protest, choosing to blame it on ‘political opportunism’ instead, or has simply dismissed the protests as run by ‘kids’. It is baffling that on the one hand, section 144 is being implemented across cities (any coincidence that this is happening only in BJP controlled states?), and on the other hand, that the Centre is being as dismissive as they are. One thing remains clear, however. The police and the law, in the NCR and in the BJP controlled states areas are being (mis)used to shut down the protests.

If you went down and participated at any of the protests, one thing would have stood out — “anti-CAA” is an umbrella for all the things that have frustrated students for a while now.

The overbearing feeling is that campuses and student life have been under constant attack. From cutting down funding of institutions to ‘saffronizing’ education, placing pressure on public university administrations,  forcefully entering campuses, and to top it all off, a shrinking job market, the students’ frustration clearly goes above and beyond just this bill.

The last straw, so to speak, was the disturbing visuals of police force on the Jamia campus. “Khoon kholne laga wo dekhke (my blood starts to boil)”, says Harsh* a student of Delhi University.

“If they can do that in a library, in the university courtyards, in their classrooms, they can do it anywhere. There are simply no boundaries. And that’s it. We’ve had it. If our parents don’t want to say anything, that’s alright. But we have to stand up, we’ve had enough”.

The actions of the government so far reek of insecurity; it could be that Modi, Shah & co. view students as a group that can actually challenge their stranglehold over Indian democracy, and they would be right to think so. History serves up some interesting arguments that support this belief.

The involvement of students in politics has been gradual and phased out. But their protests have been foundational in some of India’s biggest political issues. Even before 1905, when the British sought to divide Bengal on communal lines, students mobilized in different parts of the country against RW Carlyle’s — then the Chief Secretary to the Bengal government — infamous ‘secret’ circular to government-funded institutions to prevent students from participating in political activities.

Even in the larger freedom movement, students continued to be a strong part of its base; from being at the forefront of the non-cooperation movement at the call of Lala Lajpat Rai, to the Quit India movement of 1942, students provided much of the manpower for the daily demonstrations in the cities. In some areas, they took up leadership of the movement when Congress leaders were arrested.

One of the most effective roles that students played was in Assam, in the late 1970s and early 1980s. The All Assam Students Union (AASU) lead a six-year movement against illegal immigrants in the state, which finally culminated with the signing of the Assam Accord — which has come back to the centre of discourse with the NRC and the passing of the CAA. Post the signing of the accord, the leadership of AASU formed the Asom Gana Parishad (AGP), which contested and won the subsequent state elections. This election, in 1985, was the first time that student protests directly translated into the assumption of governmental power.

You May Also Like: Against the Grain: How Students are Supporting India’s Farmers (in Crisis)

But most important of all, who can forget that the rebellion against Indira Gandhi’s Emergency was led by none other than students. In fact, a significant chunk of our current leaders were important student leaders in their days. The late Arun Jaitley and current Prime Minister Modi were tightly wound up with the Navnirman movement. The Prime Minister’s website details his involvement:

“As a young Pracharak and associate of Akhil Bharatiya Vidyarthi Parishad (ABVP), Narendra joined the Navnirman movement and dutifully performed the tasks assigned to him…..The Navnirman Movement was Narendra’s first encounter with mass protest and led to a significant broadening of his worldview on social issues. It also propelled Narendra to the first post of his political career, General Secretary of the Lok Sangharsh Samiti in Gujarat in 1975.”

Jaitley also emerged as a key youth leader during the course of the movement, and was subsequently jailed for close to twenty days.

Hope to see more pics of those times. #Emergency
This via @KarnikaKohli pic.twitter.com/r6R94KDBsk

Student politics are at the very root of BJP’s existence, or at the very least, a big reason for the kind of power the current BJP leaders have. And this is precisely what makes this entire situation more hypocritical; the very leaders who harnessed the power of students back then are clamping down on the students of today.

Despite such a rich history, somewhere along the way, post-Emergency, the larger banner of student politics fizzled out and localised into ‘campus politics’. This largely coincides with the real pressure of training the youth in the sciences: institutes of Engineering and Medicine took over the education landscape to build valuable economic units.

This played a role in transforming students into ‘resources’ for the future as opposed to shapers of the future; the shapers and architects still remained those sitting in the halls of political power in the national and state capitals.

Right now, the battles which benefit all of us are being fought between young kids and scared old men in parliament.

These protests, and in particular, the actions against protesters have far-reaching consequences. The first is that Modi’s personal agenda of promoting India’s democratic image abroad is severely at risk. With global bodies, business giants, and leaders of other nations coming out strongly against the police action, Modi’s India is a shadow of what it has been sold as everywhere around the world.

India choosing one religion over another makes me seriously concerned about my plans to fund businesses there. #freedom #freedomofreligion. https://t.co/WnsGC3BUi6

The second consequence, and the scarier of the two, speaks to India’s constitutional ideals; when pro CAA collections can organize a rally at Delhi’s Connaught Place, with permission from the police, why can the other side not receive the same leeway? What is it about these protests, particularly in BJP ruled states (rather, states where the BJP has police control) that don’t classify as a democratic protest? Why should the pro CAA collectives, despite raising slogans that literally call for ‘gaddaron’ (traitors) to be shot (watch the video below), be given a free hand? Even if one is neutral in this entire scenario, it would be hard to not see the blatant discrimination and state-sponsored breakdown of democratic systems.

In the middle of all this, the fact that students are continuing to mobilize across the country despite the threat of violence is something to admire. It is something to be hopeful about; it shows that no matter how much you bend Indian democracy, it will refuse to break. It is in moments like these that one can say that India’s educational institutions and the students that constitute them are doing something right. After all, the primary goal of education is to create self-aware, knowledgeable and well-rounded individuals. To see the students today is proof that our democracy, though nowhere near perfect, is strong, and it gives hope for a brighter future.

The government would be smart, at least now, to take inspiration from history, from their own lives, and listen to these protests; if they continue down the current path, the Modi-Shah duo risks losing all control, and history — even the one that they have been trying to rewrite — will not look at them with a kind eye.

Featured image courtesy Jishnu Ghose | Views expressed are personal. | *names of the students have been changed.