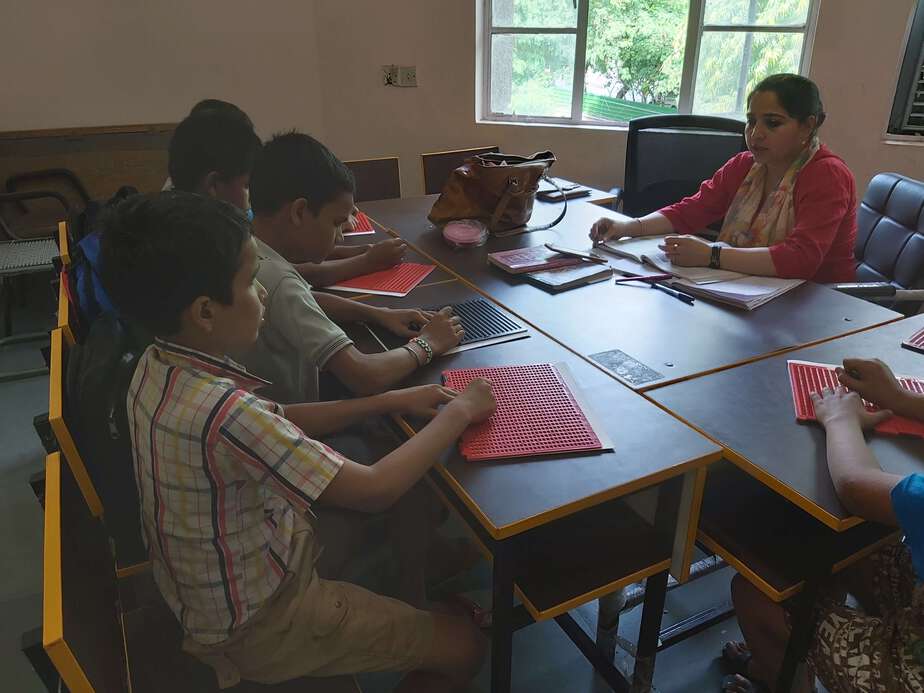 “I lost my vision to Chickenpox in my childhood. I used to feel that this has only happened to me until I met others with no vision. Studying with normal kids in a normal school was very challenging initially but I got a lot of help from other students and teachers and now I am doing really well in studies. I also believe that no one should give up in life and if you ever feel defeated, remember that everyone wins someday” — Kajal, a student of Delhi’s DAV public school in Vasant Kunj.

Education is considered a fundamental human right, and yet most visually impaired Indians cannot enforce this right. Visual impairment creates a cycle of illiteracy, poverty and social exclusion for people, making them one of the most vulnerable groups in the world.

It is due to such daunting numbers that successive governments have pushed for an inclusive education system that can cater to the needs of such a diverse population.

SEE ALSO: Education for All? Understanding the Needs of the Differently Abled

The first Braille Press, established in Dehradun in 1951, and the first vocational training centre for visually impaired women coming up in 1957 were two of the earliest interventions towards a stronger inclusive education model. The first National Library for the Blind and the National Institute for the Visually Handicapped (NIVH) were established in 1962 and 1979 respectively.

The subcontinent also has a respectable legislative history to support education for the visually impaired and the differently-abled community as a whole; education for the visually impaired has received special attention under the scheme of integrated education in the Sarva Shiksha Abhiyan (SSA)  and the NCERT. Here, children with and without disabilities participate and learn together in the same class and efforts are made to give quality education to children with special needs.

The Ministry of Social Justice & Empowerment, in pursuance of the provisions of Section 32 of the Persons with Disabilities Act, 1995 (PWD, 1995) constituted an Expert Committee for ensuring free education for every child with a disability ‘in an appropriate environment’ until the age of 18, and further identifying jobs for in both, government offices and public sector undertakings.

There are also several organizations that have been working to provide education for the visually impaired above and beyond the school environment; the National Association for the Blind (NAB), Sightsavers, National Blind Youth Association (NBYA) and Saksham are a few. Various programmes such as Accessible Books Consortium (ABC), Bookshare, Audio Books by the Score Foundation and many more, have been creating accessible resources for the visually challenged.

At the NAB centre at Delhi, there are 170 children of grades 1 to 12 residing at the centre itself and studying at different schools across Delhi. NAB works as an after-school resource centre for the children, addressing their learning needs by providing required materials like Braille kits for writing; laptops for learning basic word sounds, word and sentence formation and listening to audio clips; tailor frames for Mathematics; tactile diagrams and much more.

Ritika, a student at the NAB, explains how to use tailor frames for mathematics.

The Principal at NAB, Mrs Shantha Rangarajan said, “Children here get all the support from specially trained teachers and have all required resources. They are skilled and well equipped to study with other children at mainstream schools.”

Sadly, even after enacting these laws, children with special needs are on the margins of our education system. An NCERT study has found that differently-abled children in schools across states still face serious challenges due to the absence of special teaching material and trained teachers. Further, a research study by All-India Confederation of the Blind (AICB) shows our failure in implementation; the study shows that government programmes have often ignored the visually impaired in rural areas, leading to widespread unemployment and lack of utilization of their skills.

While employment of the visually impaired has been, to an extent, secured through the provisions of the PWD Act, those in the rural areas have not really benefitted. There are very few facilities for education and vocational training for the visually impaired in these areas due to which they are unable to equip themselves to be eligible for the benefits provided to them under Section 33 of the PWD Act.

Further, even in urban centres, the whole ‘inclusive education’ outlook is slow to catch on. Dr Anupiya Chada, a chief consultant at the national level for inclusive education for the SSA and RTE said, “Principals are not forthcoming to include such differently-abled children. They still function on the notion that regular schools are only meant for a certain type of children.” She further added that although things are improving, most schools do not have the facilities or resources for these children.

It goes without saying that the role of special educators in addressing the special needs of children with various disabilities is extremely crucial. However, the state has failed to create enough posts for such special educators in various schools. For a population of 2.7 crore people with disability, at least 15 lakh special educators are needed to address the needs in the true sense. This number is far from being met; in Chandigarh’s government schools, for instance, only 25 teachers are appointed for over 5,700 differently-abled students due to the lack of special educators, which shows the massive failure of the CBSE directive issued in 2017.

An Important Road Ahead

When children with disabilities participate in mainstream education on an equal basis with other children, the intention is that they learn from an early age that they are equal and valued members of society. They remain in the everyday social environment, are no longer isolated and participate more actively in general community activities throughout their lives. The hope is that they get the much deserved societal acceptance and that they feel like they belong, by achieving personal, social, emotional and academic goals.

While successive governments have worked towards building an inclusive education model, there is much more to be done. Given that India has the largest blind population in the world, it is essential to ensure that well-meaning policies are translated into well-targeted action. Kajal, and lakhs of children like her, depend the most on well-designed state structures, and the time to implement these is now.