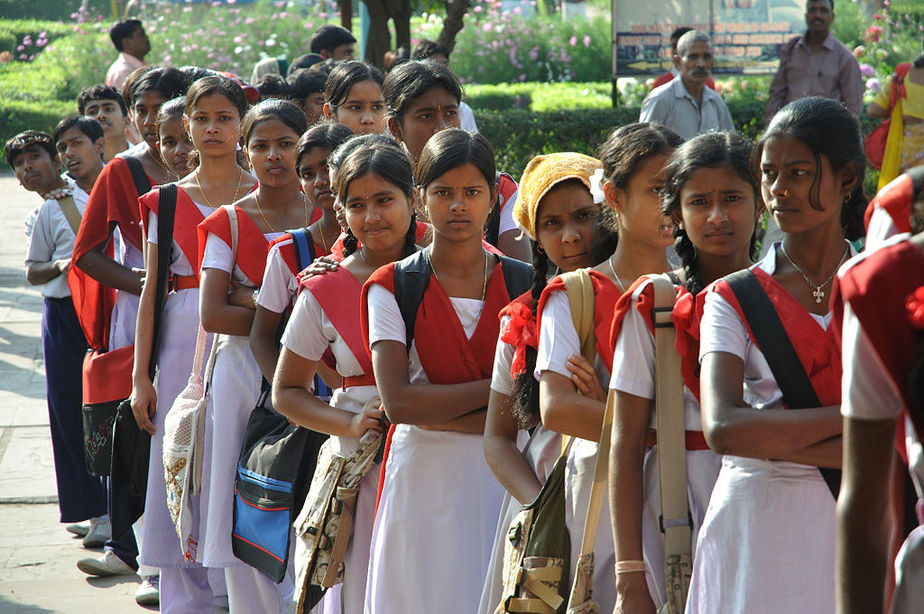 “Even if I want to be in school and not miss out on classes, it is really difficult to come during my period as the cramps are unbearable. My mother asks me not to come to school as the bathrooms are not clean and staining my uniform will be really embarrassing,” says a disappointed Kalpana.

Kalpana is the topper of class 12 at Senior Secondary Girls’ School no. 2 in Dakshinpuri, Delhi. Every month, she remains absent for around four days due to menstrual cramps. Sadly, Kalpana is not alone in this story; there are numerous students like her who share the same experience.

These stories raise a few questions; why should the most natural process for women keep Kalpana and girls like her away from school? Why should they be constantly worried about staining their clothes instead of focusing in class? How can we help shed the taboo of menstruation?

Menstruation: A Blockade to Girls’ Education

Menstruation is one of the major reasons for high dropout rates and absenteeism in female students across the globe; In India itself, 23 million girls drop out of school early when they start menstruating and many of them end up facing acute health problems. In some cases, girls simply don’t have access to sanitary products. In others, they face discrimination and stigma during their periods and they don’t have educational resources to inform them about safe and sanitary hygiene practices.

336 million Indian girls and women are of reproductive age and menstruate for 2-7 days each month. Of this, 71% of adolescent girls remain unaware of menstruation till menarche. This lack of knowledge and awareness has dire impacts on their school life. While one would normally associate this with rural areas, this challenge is ever-present in urban settings as well. Even Delhi, probably the biggest centre of education in the country, for all its progressiveness and being a ‘world capital’, has been bogged down by this issue.

A survey of over 10,000 girls in Delhi’s government schools — conducted by the NGO Sachhi Saheli — found that at least 66% either skip classes or take a half day’s leave when they are on their period. Further, it showed that 26% of these children skip classes due to a fear of staining their clothes, much like Kalpana. Shockingly, 68% did not know about menstruation until they got their period.

Painful period cramps, the deep-rooted stigma surrounding the menstrual cycle and the absence of a support system have turned a natural bodily function into an ordeal for schoolgirls in the national capital.

Successive governments have tried to tackle this problem, and the combined efforts have made some progress. In 2011, the Kishori Yojna was launched, under which sanitary napkins were distributed to adolescent girls in schools; Delhi became the first state in India to reach out to as many as 7.5 lakh girls with this scheme. Here, sanitary napkins manufactured by Johnson & Johnson (J&J) are supplied to schools every month by local vendors. The scheme was implemented in 729 schools in Delhi from December 2011 for girls studying in class 6 to 12 with a total expenditure of Rs. 1.05 crore every month. This continues to run today.

Pads given under the Kishori Yojna

“The Kishori Yojna program has been running very well in our school and the girls have benefited a lot during their periods, as a lot of them can’t afford pads due to financial conditions. There are 10 pads in every packet and we get 1200 packets by 5th of every month. I make sure all the girls get them before 10th of every month.” says Neeta, the teacher-in-charge for distributing the sanitary napkins at Dakshinpuri’s Senior Secondary Girls’ School no. 2.

Government schools in Delhi have also started holding workshops where questions around menstruation were answered. One such example is Sachhi Saheli’s campaign called ‘Break the Bloody Taboo’ which took place in 70 government schools and sought to address such questions. Further, in collaboration with the Delhi government, Sachhi Saheli had also organized a festival on the Indian National Menstrual Health Awareness Day (5th February) this year; named Period Fest’19 & Pad Yatra, over 8,000 students and teachers from 55 government and private schools participated in the festival and the march.

More to be Done

However, tackling the issue has not been without its hiccups. In March 2016, the supply of pads under the Kishori Yojna had stopped abruptly; understandably this caused a large number of students extensive discomfort. Some girls who were dependent on the programme for the napkins were forced to use a piece of cloth for some days due to poor financial conditions.

“We started buying pads on our own once the supply was stopped, but sometimes there was not enough money and we ended up using a cloth or cotton,” said Sakshi, who studies at Ambedkarnagar’s Government Senior Secondary School no. 1.

In an interview, AAP’s Atishi said that the scheme was not scrapped, but was discontinued because the suppliers (J&J) did not want to extend the contract beyond 2016, and other vendors did not step up to meet the requirements. After much deliberation and back and forth, the scheme resumed in 2018, once again, with J&J as the suppliers. However, the implementation has not been as clean this time around, and some schools are yet to receive the mandated supplies.

The other part of the scheme that emphasizes conducting workshops to educate and spread awareness has not been as effective as one would have hoped. Not all schools host workshops, and often in the ones that do, it is given only to the girls and not the boys. Further, there has been no visible effort to go beyond the students, and educate the families of these children; families (mothers in particular) inevitably are the ones who can guide the children the most.

Disclaimer: The video has been taken with the consent of the relevant school authorities and the students

Although the basic policy design and implementation are in place, there can be a lot more done to help tackle this issue. For instance, some girls at Senior Secondary school, Dakshinpuri told this reporter that despite the pads being of good quality, they are the same size for all girls from classes 6 to 12. Age-appropriate and different sizes of pads must be provided to ensure maximum comfort for students.

Second, as stated above, there should be mandatory workshops for both boys and girls from class 6th to 12th of every school to drive awareness and sensitization among all students regarding menstruation. This is the only way to defeat deep-rooted cultural beliefs. To take this one step forward, menstrual health and hygiene should become a part of everyday syllabus (some states — most recently, Maharashtra — are already doing this).

Third, the maintenance of sanitation facilities along with a regular supply of water in schools must be made a priority, and students should be taught how to use sanitary disposal mechanisms.

Lastly, it is important to take this awareness back home; mothers must become the focal point for imparting menstrual education. In most cases, mothers are the primary source of information and guidance for many girls during menstruation. Training and educating mothers on how to best approach this situation will surely lead to better habits at and outside the home.

Menstruation and the several issues related to it have been kept under the wraps of old newspapers and black plastic bags for ages now. It’s time that all actors — political parties, civil societies and the general population — work even harder to break the menstrual taboo and ensure that schools become safe spaces for children like Kalpana to build a future.