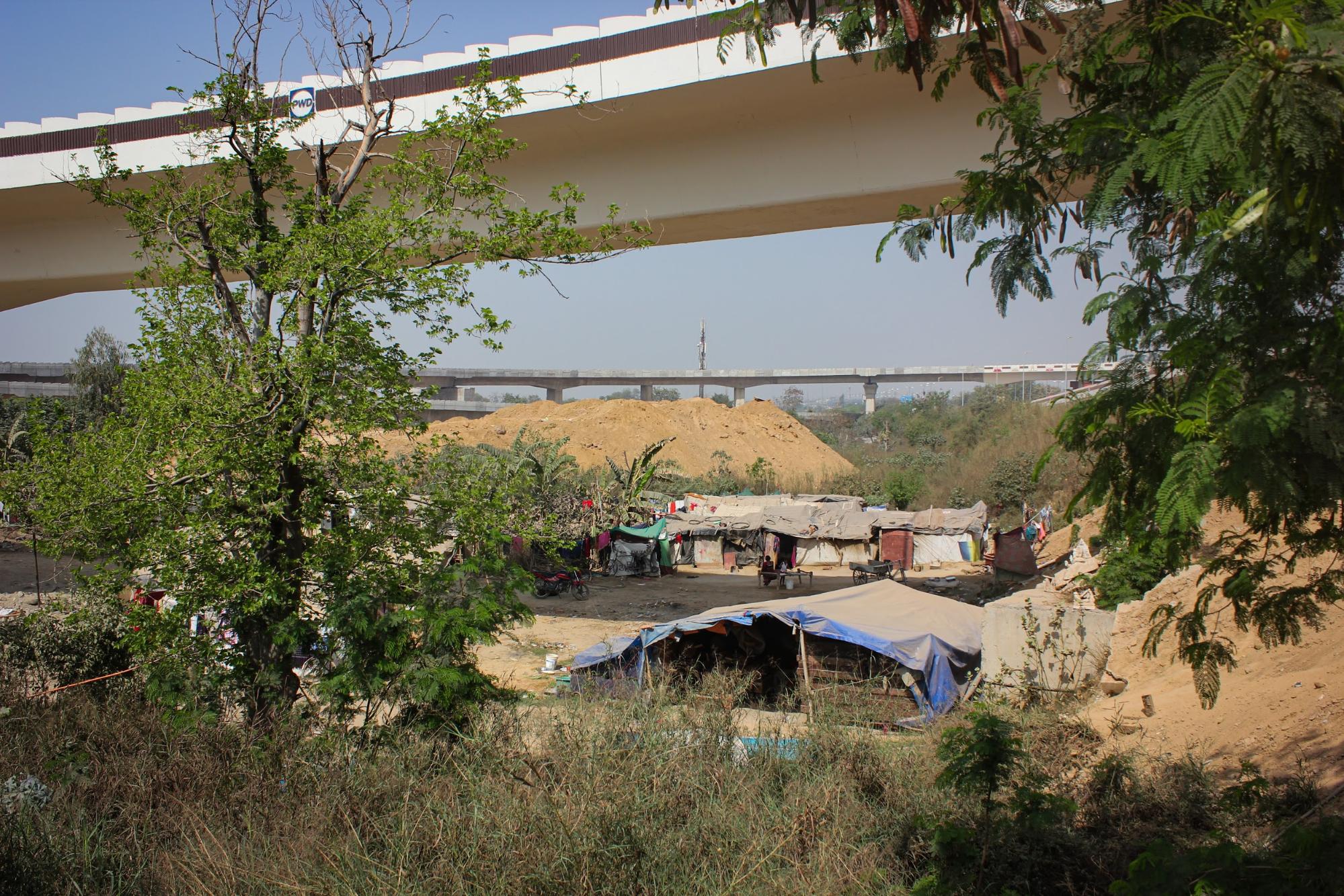 Dev, Neetu, and I are standing outside Neetu’s jhuggi (temporary settlement) in North-East Delhi’s Yamuna Khadar. Like most of the settlements here on the Yamuna’s floodplain, split bamboo stems are knitted together to form the roof of the dwelling, which is then topped by a blue tarpaulin sheet. Neetu covers her face with a dupatta as she speaks, to avoid the dust blowing her way from the construction site of two flyover loops in Mayur Vihar—the extended road for which continues straight above her house.

Peeping inside, I observe a single burner stove, a small LPG cylinder, a nail in a bamboo pillar with face masks hanging off it, a few utensils, and cooking oil—all the usual essentials. Except, there is one strange detail. A cemented pole stands tall in the centre of the kitchen. This is a new instalment, Neetu tells me. “Some officials came here and constructed this a few days ago, but they did not tell us why they were doing so.” Dev Pal, a former resident of Yamuna Khadar who currently works as a field researcher with the Housing and Land Rights Network managed to find out a little more about this new instalment. “It was the Public Works Department (PWD) who installed this pole. They have not communicated the purpose of this construction, but these are the kind of poles that are used when an area is being demarcated for development by the Delhi Development Authority (DDA),” he tells me.

For Neetu, the pole is a reminder of how temporary her home is in the face of any new development in Yamuna Khadar. For me, it feels like their home is almost invisible—the cemented demarcation sits squarely in the middle of their home.

This demarcation by PWD is not the only threat to the communities living here. Around 20 days ago, trucks unloaded mud in various parts of Yamuna Khadar in areas where approximately 70 families reside in jhuggis, including Neetu herself. Since then, officials dumping the mud here have been asking Yamuna Khadar’s families to prepare to shift their residences. A majority of this mud is from the construction site of New Delhi’s latest pet project—the Central Vista Redevelopment Project.

But, why is this mud from the Central Vista Redevelopment Project being dumped ten kilometres away in Yamuna Khadar?

“We will develop this area,” A.K Sharma, a PWD official tells me, as I briefly interrupt his site visit the afternoon I met Neetu. “These two loop flyovers that are being constructed in Mayur Vihar will have a green area below them, with a 4-metre-wide walking path. To construct this, mud from the Central Vista project is being used to raise the current ground level here.” Glancing at the informal colony below, I ask Mr. Sharma about their plans to accommodate the informal settlement. “They will move when we ask them to move,” he replies, nonchalantly.

Sharma’s calm demeanour belies the conflict that occurred just the previous day, on the 23rd of February, 2021. PWD officials arrived at the colony and gave the residents 30 minutes to empty out their belongings from the jhuggis and prepare for their demolition. They told the residents that this was being done upon a court order.

As I have previously reported, such evictions in Yamuna Khadar have been regular occurrences in the last decade, regardless of whether the homes evicted are those of farmers, nursery tenders, or those employed in  the informal economy such as domestic help, security guards, drivers, and small food stall operators.

The bottomline of evictions is this—most of this land belongs to the DDA, the apex land owning agency in Delhi, and as a result, all those living here are considered ‘encroachers’. But, in various Supreme Court judgements on similar slum evictions, judges have encouraged a broader view of the slum dweller and the need to recognise such persons as rights bearers, not as encroachers. Their rights to live in the city, the judgements have said, are recognised and protected by the Constitution of India.

“Since the PWD officials and the police had arrived, residents believed them and prepared themselves to vacate their homes,” says Dev. By the time he arrived onsite, most of the house owners here had moved their belongings outside. “But, I asked the officials to show the order that they were referring to. This is because just two days prior to this eviction drive, the court hearing did not take place as scheduled because the PWD advocate did not arrive for the hearing. So, as per my knowledge, no court order had been passed.” After the officials were unable to present any such order to the locals here, the matter was resolved momentarily. The officials left and residents put their belongings back inside.

Dev is referring to a sub-judice case in the Delhi High Court being fought by petitioners under the banner of Yamuna Khadar Slum Union against the Delhi Development Authority. The Authority is being tried for having conducted evictions in 2019 without the rehabilitation of residents. Later that year, the High Court ordered the DDA to stay any further demolitions in Yamuna Khadar, and to carry out an enumeration of all those whose homes have been previously demolished.

In response to this year’s fresh threats of evictions due to mud dumping from the Central Vista project, the Slum Union moved an application in the Delhi High Court. On the 26th of February, the Court issued a notice to the PWD to provide a written clarification as to why they have been threatening people living in Yamuna Khadar with demolitions. Since then, no new instances of mud dumping have occurred, but people here fear that this is only a temporary respite.

“All that we are asking for is rehabilitation before the demolition of houses,” explains Dev. A recent High Court judgement from 2019—Ajay Maken Vs Union of India—suggested the same in the context of evictions in a different jhuggi in Delhi. “It is essential to first complete a survey and consult the JJ [jhuggi–jhopdi] dwellers,” the order states. “If no in situ rehabilitation is feasible, then as and when the respondents [referring to Union of India] are in a position to rehabilitate the eligible dwellers of the JJ bastis and jhuggis, adequate time will be given to such dwellers to make arrangements to move to the relocation site.”

This order evoked the Delhi Slum and JJ Rehabilitation and Relocation Policy, 2015. Referring to the Right to Housing as a fundamental right, it ensures that any basti in Delhi existing prior to 2006 shall not be demolished without alternate housing arrangements for the residents in place. The Delhi Urban Shelter Improvement Board (DUSIB)—the nodal agency for this Act—would provide this alternate accommodation within a radius of 5 kilometres, the Act states.

Anjali*, who has been living in Yamuna Khadar for the last 25 years explains why it’s important that the alternate dwelling is close to their current homes. “If the place offered to us is far away from here, we will have to look for new jobs,” she says. Anjali works as a domestic help in various apartments in Mayur Vihar. Her children, too, go to a school near-by.

Behind her, a huge pile of mud is visible, which has accumulated over the last few days. “On the first night [3rd February], about 50 dumpers came post 9:30pm and dumped this mud here,” Dev tells me, as he notices me studying the pile. “If the dumping continues without these homes being relocated, [and] if it rains, all the jhuggis will get flooded since these areas will be lower-lying than the piles of mud,” Dev adds

Hanging in the regulatory uncertainty of neither being here nor there, the homes in Yamuna Khadar await a more permanent solution. The next High Court hearing might only take place sometime later in March or April 2021. What makes the resident’s situation murkier are various National Green Tribunal (NGT) Orders of  2015, 2017, and 2019. These directed that the Yamuna floodplain should be cleared of encroachments as it is an eco-sensitive zone; it has been used by the DDA to support their actions of carrying out demolitions here too.

“When it comes to the ecological aspect of land and the demolition of structures, the NGT has jurisdiction over these aspects. But, relocation and rehabilitation, which comes under the Right to Housing, is under the High Court’s jurisdiction. We’ll have to see how this NGT order plays out in the hearings ahead,” Jimut Mohapatra, an advocate at the Human Rights Law Network tells me over the phone. Mohapatra has been fighting the case for the Slum Union in the High Court.

He adds another challenge for the dwellers here. “If an order is passed in our favour, our work as advocates would end, but for the slum dwellers here, the fight will still continue,” explains Jimut. “Under the Delhi Slum and JJ Rehabilitation and Relocation Policy, the process of rehabilitation requires certain documentation to prove that the family in question has been living in the area before the 1st of January, 2015. Now, not many families are aware of these processes, [and] many may not even have documentation. All of that will be another set of problems.”

As residents await more certainty, the questions of who can have access to land in Delhi and for what purpose, springs up once again. “They [government officials] want to remove families who have been living here [on the floodplain] for decades, to make space for new biodiversity parks, or for infrastructure like the Commonwealth Games Village which were built more than a decade ago, all on the same eco-sensitive floodplain. Who then is really the encroacher?” Dev asks.

For now, the cemented pole erected in Neetu’s home reminds her that her family is one, along with many others staying in Yamuna Khadar, who are living their lives on the edge of eviction.