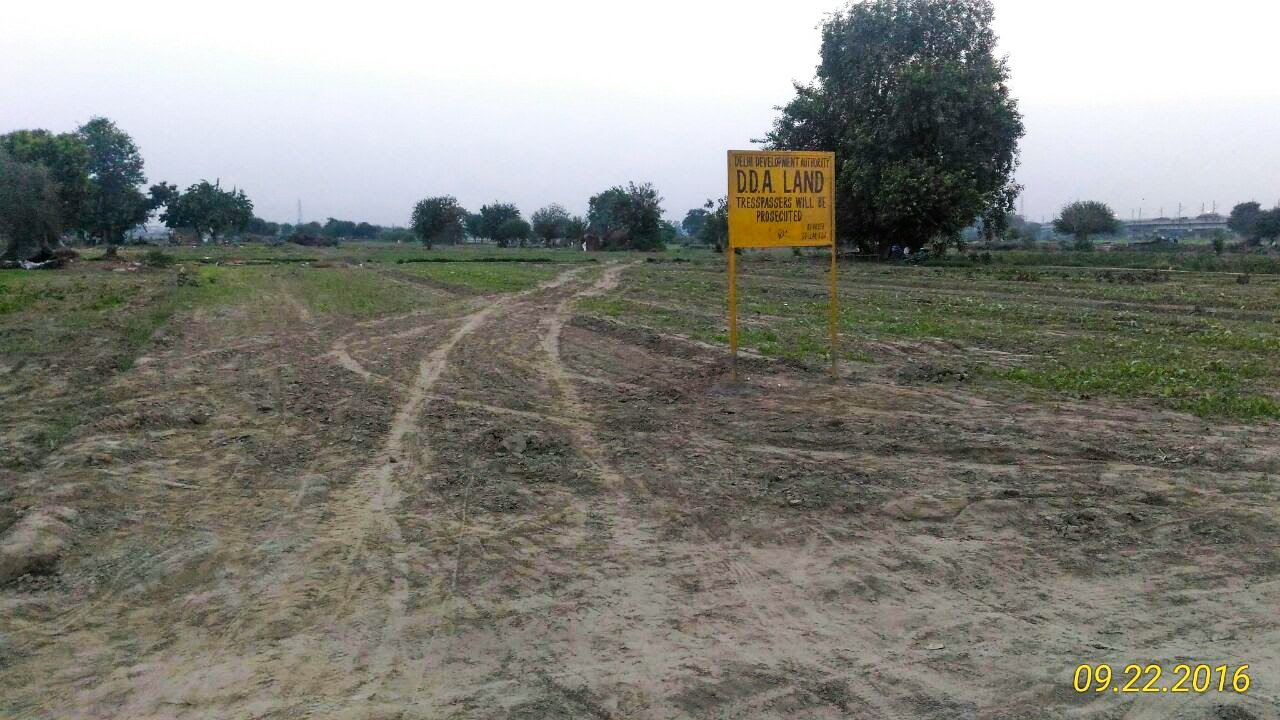 Every year during the monsoons my social media blows up with reports of the Yamuna floodplains brimming with water, closely followed by stories on the rehabilitation of the people living there. This year though, a different activity seemed to be brewing. In the last week of August, officials and bulldozers of the Delhi Development Authority (DDA) arrived at the fields of Yamuna Khadar, an area just across East Delhi’s posh locality of Mayur Vihar. Within a few hours, numerous bighas of agricultural land and nurseries had been cleared.

Watching the videos of this take place hit a different nerve. I had been to these fields. My thoughts rushed to last August (in a COVID-19-free world) when I walked under the busy intersection of the Pink and Blue metro lines at Mayur Vihar, towards Yamuna Khadar. The Yamuna flows just about 4 km from where I had entered, nourishing a fertile floodplain once populated with fields growing ladies’ fingers and bottle gourds in the summer, and spinach, cauliflowers, and radishes in the winter. But just a few weeks ago, many of these fields that I had visited had been demolished.

“Around 50 to 100 bighas of fields and nurseries must have been cleared,” Chaini, a third-generation farmer here, told me over the phone. His field luckily escaped that fate. “The officials told us they were coming to clear this land out to plant trees.” That sounded absurd; but, the dots quickly connected.

Soon after the demolition drive, the DDA responded to a tweet by the South Asia Network on Dams, Rivers and People (SANDRP) that highlighted the demolition. The DDA replied saying that 10 projects are underway on the Yamuna floodplains, which include “planting riverine flora.” Beyond just beautification though, the floodplain has also been allocated for compensatory afforestation—the Ministry of Housing Urban Affairs allotted 700 acres of land to the  Delhi Metro Rail Corporation (DMRC) for compensatory plantation, in lieu of trees being felled across the city for the metro’s construction. DDA officials did not respond to my requests for comments on this matter.

This decision to plant trees seems to be taken in line with a National Green Tribunal (NGT) order issued in August 2019, where the Yamuna Monitoring Committee pressed the need to rejuvenate the floodplain by “repossessing the floodplain area under illegal and unauthorized possession,” and barring the cultivation of edible crops, amongst a list of other recommendations.

“This kind of vision that the DDA has for rejuvenation and other developments on the floodplain seem to fit well for infrastructural projects like the Commonwealth Village and Akshardham Temple [which are also situated on the same floodplain]. But farmers, agricultural workers, and those tending the nurseries do not seem to have a place in this same vision,” says Bhim Singh Rawat, an associate coordinator, SANDRP.

Last week, these plans seem to have concretised even further, with the DDA announcing a 247-acre biodiversity park on the Yamuna floodplains near Mayur Vihar, which is where Chaini and his family of six live, dependent upon the produce of their 15 bighas of land.

Is Farming Along the Floodplain the Only Problem?

Last September, the NGT directed the DDA to stop all farming along the Yamuna floodplain by April 2020. This was in continuation of a 2015 order, based on revealing reports by the National Environmental Engineering Resource Institute and the Central Pollution Control Board, which suggested the presence of high doses of lead in the vegetables growing on the floodplain. Why? Because farmers use the Yamuna’s polluted water for irrigation. They also reported that the excessive fertilisers and pesticides used by farmers on the floodplain were contributing to the further pollution of the Yamuna’s waters. This raises the larger problem at hand here—the Yamuna’s polluted waters.

Apart from banning cultivation, in the same order the NGT also recommends that the dumping of debris in the river should stop completely and that a “polluters pay principle” be adopted. The order also prohibits any construction activity in the demarcated floodplain. Yet, apart from the eviction drives, most of these other recommendations have not been met.

As of January 2019, the Yamuna Monitoring Committee noted the lack of progress. The faecal coliform count—which measures the amount of disease-causing coliform present in the water—was up to 6,400 times above the prescribed standards. Additionally, the sewerage networks of colonies were lacking: only 14% of the 1797 colonies surveyed had sewage pipelines.

As recently as 4th August 2020, the DDA and SANDRP carried out joint inspections at different sites along the Yamuna. At Signature Bridge, they found that owing to heavy construction, huge amounts of debris had been dumped in the river. Shockingly, they also found that the Delhi Metro Rail Corporation (DMRC) had raised, filled, levelled, and enclosed 4,800 square feet of the riverbed for the upcoming Majlis Park-Maujpur Metro line—all in complete violation of the 2015 NGT order.

But, in spite of these pending issues, what makes these eviction drives alone so easy to carry out? The answers lie in the nature of land holdings along the floodplain.

Who Owns the Land?

Pushpendra, currently a Grade 12 student, lives close to Chaini. His family is also dependent on their agricultural fields at Yamuna Khadar. “After the officials demolished the fields they told us they will return later in August, but they never showed up.” Uncertain about their future, they chose to plant radish and other vegetables to prepare for the winter.

Like many other farmers and workers in the nurseries at Yamuna Khadar, Pushpendra’s family migrated from Badaun, Uttar Pradesh to Delhi for work. His family has been cultivating crops here for the last 30 years. But, they don’t legally own the land they cultivate on. Instead, they have taken it on rent from the owner at an annual charge. From my last visit there, I remember interacting with many agricultural tenants like Pushpendra. While we were animatedly discussing fruits and farming in Delhi, they all highlighted something—none of them had any papers to show that they are tenants; agricultural tenancy, in fact, has not been officially recorded by many states so far.

The status of land ownership is even murkier for some of the landowners themselves: Pushpendra’s landowner is a case in point. He is one of the many farmers leased land on the floodplain by the government after independence.

In 1949, the Delhi Improvement Board—the DDA’s predecessor—leased out land to the Delhi Peasants Cooperative Multipurpose Society (DPCMS) for agriculture, who then further allotted the land to farmers. In 1966 though, the newly functioning DDA terminated the lease.

“The landowners and a few other farmers are now fighting a case to extend the land lease,” says Pushpendra. In the meanwhile, none of the farmers at Yamuna Khadar—whether tenants or those with the official lease agreements in hand—are considered legal occupants of the land; as a result, they are deemed ‘encroachers’ who need to empty out the floodplain, in order to protect and rejuvenate it.

Such eviction drives have been happening since 2016; each time, the farmers here said that they were not given any prior notice.

“1000s of bighas of sown land have been bulldozed,” wrote groups of nursery owners, workers, and cultivators in a letter to the Prime Minister in 2016, a copy of which was accessed by The Bastion. “Our homes and fields have been uprooted, which is how we earned our daily living (..) We have been asked to move without any prior information,” they had written. “Our children are asserting their right to study. If their parents are displaced, how will they study?”

If evictions are really because farmers are polluting the river, then Chaini is ready with a solution. “We are already attempting organic farming on our fields, and are ready to make a complete shift too,” he tells me. On his piece of land, he has already begun using cow dung, as opposed to chemical fertilizers.

“If it is a matter of planting trees, then why remove our fields? At a time when employment is hard to come by, the DDA can employ us to do the same work,” he suggests. A solution like this could indeed kill two birds with one stone—afforestation could be conducted while ensuring that the livelihoods of those living here remain secured. Chaini has already reared Guava and Neem trees in his fields.

As he tells me this, my mind once more wanders to Satya Vir Sharma, who I met on my last visit last August. A nursery owner in Yamuna Khadar, he showed me his nursery—which at that time was brimming with flowers and vegetable saplings, and herbal, and indoor plants. He had proudly said, “We are the ones who make Delhi green!” And yet, the future of the Yamuna floodplain seems to have a biodiversity “park”, sans farmers, their fields, and lush nurseries. The irony is hard to miss.

Featured image by Satyavir Sharma. | Reporting for this piece was carried out in August 2019, and September 2020.