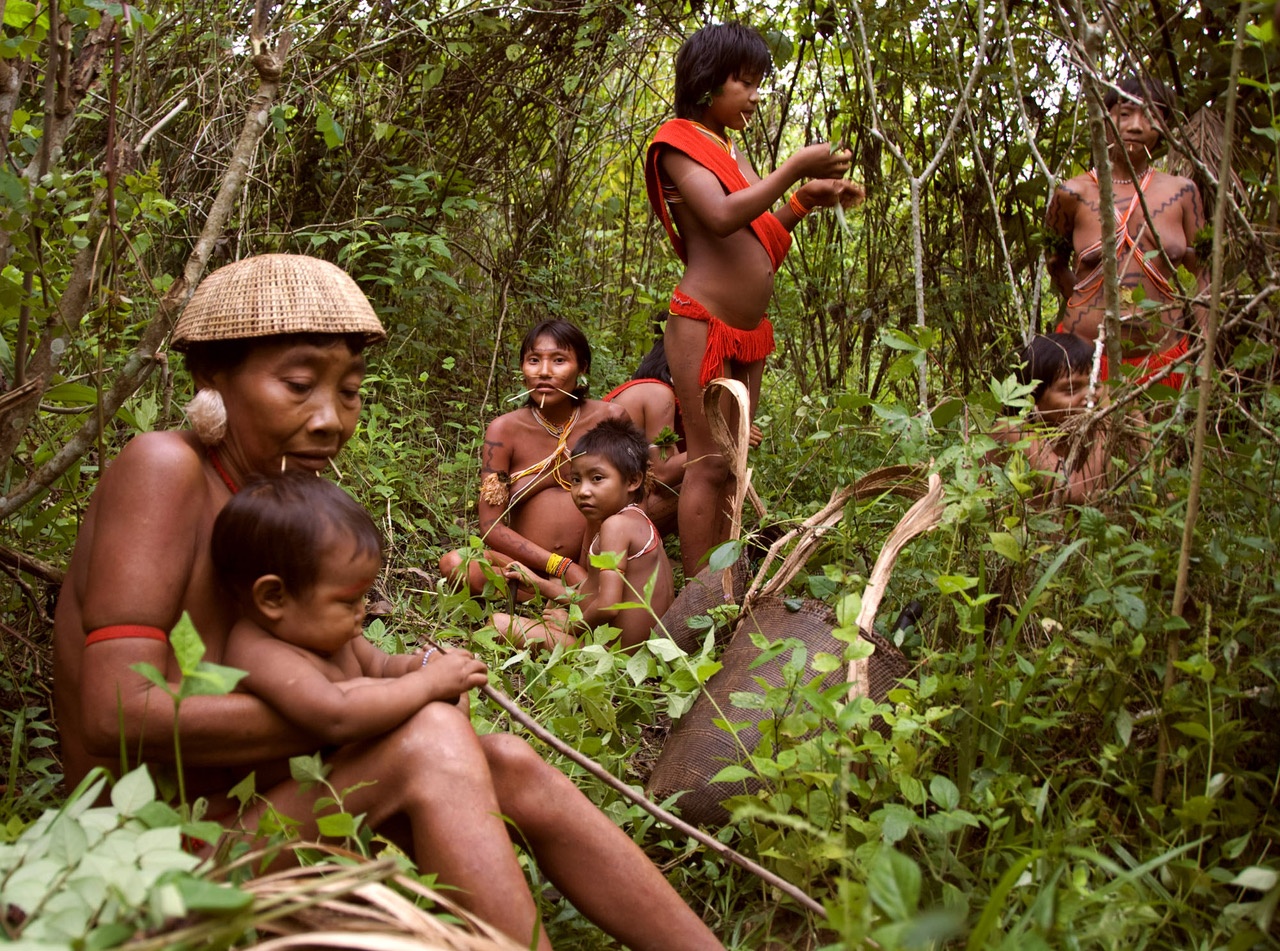 Pico da Neblina, or the “Mist Peak”, is Brazil’s highest mountain peak. For the Yanomami—South America’s largest “relatively isolated tribe” who live within the Amazon forests—the peak is sacred. They believe that  “hekurapë”, or guiding spirits, live here.

From Pico da Neblina to the Uraricoera River in the East, 10 million hectares are demarcated as Yanomami Indigenous Territory, where two-thirds of the world’s Yanomami population reside. Here, the Amazon river system nurtures the sprawling rainforest that supports more than 10% of the world’s biodiversity. But, beneath the ground, this region is home to another precious resource: gold deposits. Unlike other natural resources that the Yanomami depend on for their survival, this particular resource threatens their existence.

In June this year, a conflict resulted in the death of two Yanomami men at the hands of gold miners along the Uraricoera river, in the Brazilian state of Roraima. “If this keeps happening, they will kill us all. They really want to do away with us,” testifies D. Yanomami, a resident of a Yanomami village in Roraima.

Where there were 10 gold mines in 2016, the Yanomami Indigenous Territory saw their numbers swell to 207 by 2019. Along the Uraricoera alone, 64 existing mines have popped up.

Where does all this gold go? Apart from the United Arab Emirates (UAE), gold mined from Roraima is exported to only one more country in the world—India, as the Brazilian database ComEx states. However, a 2019 BBC report made a shocking revelation—during the period when this gold was exported to India and the UAE, not one gold mine had been operating legally in Roraima; all of them were operated illegally.

The recent murders of the two men have brought back haunting memories of the Haximu Massacre of 1993, where gold miners murdered 16 Yanomami, including a baby. These deaths followed from the first gold rush in the region back in the 1980s, when up to 45,000 Brazillian gold-miners invaded the Yanomami’s land. This exposed the tribe to diseases which they had no immunity to. In just 7 years, 20 percent of the Yanomami had died from these diseases.

The alarming impacts of this initial “gold rush” resulted in a landmark presidential decree in 1992 which recognised the indigenous peoples’ customary rights over the lands that they traditionally occupied. Mining and other exploitations of indigenous land would be allowed only with the “authorisation of [Brazil’s]National Congress, after hearing from the communities involved…”

Yet, at present, the tribe’s vocal rejection of gold mining since the 1980s has been overlooked. Gold prospectors, or garimpeiros as they are locally known, have continued to make inroads in the Indigenous Territory, in complete violation of the presidential decree.

In 2019, after Venezuela and China, India became the third-largest importer of Brazillian gold. India imported a total of 14,000 kgs of gold from Brazil in 2019, which according to government figures, was worth $358 million (USD). Of this, gold worth $6 million (USD) was imported from the state of Roraima, where the recent killings took place.

Speaking in the context of the illegal gold mining and killings, Davi Konepawa, a Yanomami spokesperson and shaman—a person regarded to interact with the spiritual world— says, “We Yanomami will never be friends with the gold prospectors.”

A glance at satellite images of Roraima’s Uraricoera river explains Davi’s frustration. Between 2016 and 2020, the river bed’s appearance has changed. In 2016, the river snaked uninterruptedly through pristine green rainforests; by 2020, wide balding areas were visible, patches where rainforests had once stood.

This deforestation has permanent ecological impacts. A 2020 study warned that gold mining-related deforestation has resulted in the annual loss of over two million tonnes of forest carbon across the Amazon. In fact, at some sites, the researchers found that there was nearly no tree regeneration even three to four years after the mining had stopped. The research blames this on mining-induced depletion of soil nutrients, followed by mercury contamination.

Keeping in mind the region’s rich ecology, this is of grave concern. The Territory’s biodiversity is well documented by the Hutukara Association in collaboration with indigenous researchers. A 2015 book that the Yanomami published listed 101 species of plants, six fungi, and 14 insects—all in a single village alone.

Highlighting the severity of mercury contamination, a 2018 study found that in areas where gold was being mined, high mercury levels were found in almost 92% of the Yanomami population. The presence of mercury here is not surprising—mercury is indiscriminately added in sediments of gold to help extract the precious metal. In the process, some of the mercury evaporates into the atmosphere, and some makes it back to the earth in the form of rain deposits, thus returning to soil and water bodies. For the Yanomami, who sustain themselves through hunting, fishing, and tending to forest gardens that grow pineapples, cassavas, and corn, exposure to mercury seems inescapable.

The most recent health crisis for the Yanomami is COVID-19. The spread of this coronavirus through the gold miners can have a devastating impact on the Yanomami, who already have a history of high morbidity. A recent study shows the worst-case scenario, where 40% of the Yanomami who live in the mining zones could become infected by COVID-19. Dozens have already been infected. In response, Yanomami organisations have launched the “Miners Out, COVID Out” campaign.

“In the way of their living, the Yanomami are architects of conservation,” says Fiona. “Shamanism is an integral part of the [culture of the] tribe. They strongly believe in maintaining balance with the natural world [in their lives], and that makes them great conservationists.” The current mining situation, however, is tipping that very fine balance for them.

“Over the years, there have been a few piecemeal operations that the Brazillian government has undertaken to remove the illegal miners from the indigenous lands. But that does not tackle the root of the problem,” says Fiona. “The large, complex network of politicians and miners that this gold mining is a part of remains largely unhindered.”

Brazillian President Jair Bolsonaro’s rhetoric of “development” in indigenous territories does not help the Yanomami’s cause. His government has been vocal about utilising the land’s resources. In one instance in 2019 while addressing indigenous groups, President Bolsonaro said, “Some want you to stay inside the indigenous land as if you were a prehistoric animal (…) You have land, a lot of land, let’s use that land.”

This push for “use” is already visible. In Pantanal, the world’s largest tropical wetlands, the first half of 2020 has seen more than double fires than the same period last year. President Bolsonaro’s call to clear the land for economic development, through farming and other industries in the Amazon, is said to cause the surge.

You May Also Like: The Bolsonaro-Modi Affair: Defining Development this Republic Day

This February, President Bolsanaro attempted to concretise such development by sending a bill to the National Congress to explore economic activities on indigenous lands. The bill suggests that while the indigenous peoples would be heard, they cannot veto to reject any such development. The bill has not been passed yet. However, more guidelines to encourage land-grabbing in Indigenous Territories have been introduced.

On the other hand, Brazil has also signed the “Due Diligence Guidance for Responsible Supply Chains of Minerals from Conflict-Affected and High Risk Areas”—a Recommendation by the OECD. The guidance centres the need for companies to respect human rights and avoid contributing to conflicts.

“Such guidelines are not legally binding on the nations [who sign them],” Phillipe Cullet, Professor of International and Environmental Law at the School of Oriental and African Studies at the University of London, tells The Bastion. “Regulating Blood Diamonds was supposedly the most developed framework to hold both exporters and importers responsible, yet, it faces criticism today.”

How can Importing countries be held responsible?

Cullet is referring to the Kimberly process, wherein 48 nations in 2002 agreed to exclude conflict diamonds—or diamond mining that financed and motivated vicious terrorist organisations—from international trade through a United Nations resolution. 18 years later, the process has been critiqued for not regulating diamonds tainted by conflicts other than militancy, such as sexual violence and the inhumane treatment of workers. In effect, many such blood diamonds still escape into the market.

As India imported 486 kilograms of Gold from Roraima alone, it is clear that India’s demand for gold is being met at the cost of diminishing the natural resources of the Yanomami. The gravity of this situation calls for a well-developed framework that extends accountability to all the players involved. “There is obviously a need for both producer and consumer countries to hold responsibilities in international trade,” says Cullet.

This has been experimented with before. To prevent the illegal logging of trees through international trade, the European Union published the Forest Law Enforcement, Governance and Trade (FLEGT) Action Plan. The Plan holds importers equally responsible for “unwittingly buy(ing) illegal timber” and having a “devastating impact on the world’s most valuable remaining forests.” Similar regulations for international trade of mines are also needed, which hold importing countries responsible too.

This is not a question of ethical and responsible trading alone. It also becomes a part of the climate conversation where such trade is currently practiced at the cost of losing a huge carbon sink.  As Davi said during a recent UN Human Rights Council session in Geneva, in an appeal to the Brazillian government to retract all illegal gold mining, “We take care of the forest for everyone, not just for the Yanomami and uncontacted peoples.”

The Yanomami have opposed these developments collectively. Along with the Brazilian National Human Rights Commission, they have submitted a petition to the Inter-American Commission on Human Rights They have also drawn out an alternate management plan of how they would manage their Yanomami territory, sans the gold miners. You can support their efforts through this campaign in English, or this campaign in Portuguese. For more information on the Yanomami tribe, click here.