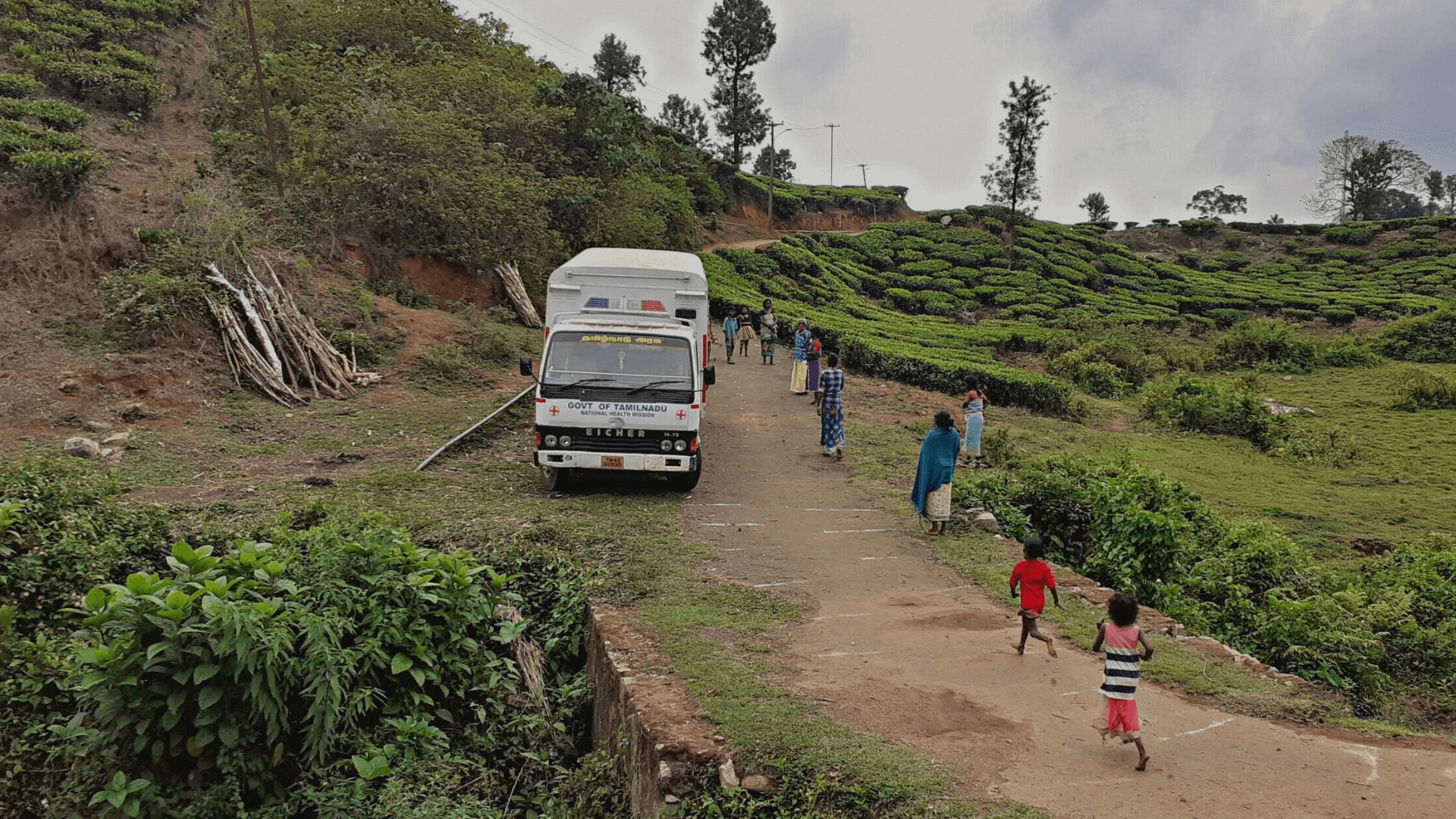 The title of the seminal book ‘Where there is no Doctor’ by David Werner published in 1970, summed up situations where a qualified doctor was not available and anyone could learn from  a rudimentary knowledge of medical matters.

A half-century later, the title also describes a situation where qualified healthcare professionals are missing in large numbers—the rural India. According to a study by the World Health Organization (WHO), India has just 7 doctors per thousand population while Pakistan has 11 and China has 22. The situation in rural India is much worse.

Manish was slipping into a coma.

He was a strong, young Adivasi with a muscular body. But a few days of severe diarrhoea had knocked him out, sending him into septic shock. His blood pressure was not recordable.

When he arrived at the Gudalur Adivasi Hospital [in the Nilgiris District of Tamil Nadu], we put intravenous lines on both arms and pushed fluids and antibiotics. Oxygen was supplemented as were drugs to keep his blood pressure up. We had to keep his kidneys perfused to prevent them from shutting down.

Dr Nandakumar, is a surgeon who returned from New York and ran the Gudalur Adivasi Hospital in the Nilgiris, along with his wife, Dr Shylaja Devi  for many decades. He says, “People said I was too highly trained for rural India, my skills would be wasted. But does it really matter whether you save a life with fluids or cardiothoracic surgery?”

In 2021, along with three like-minded people, Dr Nandakumar founded the Rural Hospital Network (RHN)—a website dedicated to filling the gaps about healthcare careers in rural India. RHN’s founders come from diverse professional backgrounds. Dr Nandakumar is a general surgeon and a longstanding community medicine practitioner, Aroon Raman is a corporate advisor and philanthropist, Dr Alisha Kalyanpur is a young doctor with a keen interest in the field, and Priti David is a journalist and editor.

While founding RHN, Dr Nandakumar felt that many doctors like him experience rich and fulfilling careers in rural hospitals – by examining and diagnosing a wide variety of medical issues not restricted to any single specialisation. But it was not just a lack of information that was stopping health professionals from working in rural areas, there were the damning stereotypes about careers in rural healthcare. Rural India is generally perceived as a place of depressing poverty, traditional and irrational mindsets about gender and caste, and low education and literacy. So finding like-minded professionals and establishing relationships with patients would be difficult, it was believed.

RHN has taken on an ambitious task; to change the way a job in healthcare in rural areas is perceived. As 66% of India lives in its villages and small towns, this is a place of amazing diversity of language and cultures, landscapes and livelihoods: a world within a country. But there is one common factor—the lack of access to and availability of quality healthcare.

This is reflected in the acute and chronic shortfall of health professionals, not just doctors and nurses, but health workers, laboratory technicians and others in rural areas. According to Rural Health Statistics 2020-21, India  needs 8,762 doctors at its primary health centres (PHCs) and 9,268 Surgeons, Obstetricians and Gynaecologists, Physicians and Paediatricians in community health centres (CHCs).

Despite the rising numbers of medical colleges and the stream of qualified doctors emerging from their portals, many health indicators in India remain unchanged. “India ranked 10th out of 11 Asia Pacific countries in a newly-launched health index to measure the progress towards personalised healthcare by the economic intelligence unit,” says a report published in a leading national daily.

The yawning gap of thousands of doctors is not getting filled also because, like other stereotypes about rural India, there is a feeling among professionals that a job in a rural hospital will somehow fall short.

“You are just a paracetamol doctor.
Isn’t life boring without malls and movie theatres?
What will you learn by treating poor patients?”

In fact, the opposite is often true.

“It’s been an incredible learning experience! I have realised there is so much more to learn, and everyday here has been nothing short of a revelation,” says Dr Aleena Rodrigues, an MBBS Doctor at the Chetna Mahila Swasthiya Kendra in Chandanagar, Bokaro, Jharkhand. Previously, Rodrigues spent over two years working with an Adivasi community in south India before moving to Jharkhand.

Not all rural hospitals are well run and well-equipped. Among the many challenges are identifying the right hospital and making sure the information is accurate, up-to-date and honest. Something that RHN is working hard to maintain. This means identifying hospitals along with validating and verifying their facilities, which gives an assurance that what you are signing up for actually exists on the ground!

The website has quickly gained a reputation in the field and lists 23 hospitals across the country—in Chhattisgarh, Uttarakhand, Assam and Tamil Nadu among others. Three important medical networks are also listed, adding multiple positions and a variety of options. Openings for surgeons, physicians, researchers, nurses and laboratory technicians get hundreds of views every month.

The website is constantly growing and trying to accommodate new ideas on how to make the information accessible and comprehensive. A new FAQs section helps with answers to generic queries as does Treatment Guidelines. The fellowships and grants targeted at serving  in rural areas are now listed so that those in need of funding can narrow their choices. RHN gets queries from medical specialists who would like to travel to rural areas as Visiting Consultants—a big help to remotely located hospitals—and this too has become a drop down in our menu. News about talks and workshops in the field are updated and current.

Why did you refer my wife to another hospital? Why didn’t you just treat her here in your hospital?” asked the distraught husband.

A week ago, his wife had been wheeled into our Adivasi hospital with an oxygen saturation of 60 per cent; her lungs showed advanced COVID. We had given her first aid treatment and referred her to the nearest centre for further management – a government hospital four hours away. There she was kept isolated in a COVID  intensive care unit (ICU).

Meanwhile, her husband slept on the floor, in the hospital corridors. Despite it being a government hospital, for every investigation and treatment he was asked to cough up sums of money he didn’t have. The couple are Paniya Adivasis, among the poorest tribes in the Nilgiris.

When his wife passed away, he returned to the hospital, distressed but also wanting to share his frustration with people who know him and his community, remembers Dr Alisha Kalyanpur who worked at the Adivasi hospital in the Nilgiris for a year after completing her MBBS.

It is not just the shortage of doctors in rural areas, but also pressure on government hospitals there—a single primary health centre (PHC) covers 35,602 people in rural areas; a community health centre (CHC) covers 1,63,298 people. The alternative is private healthcare, which in rural areas routinely exploits the ignorance of most patients, functions with a feudal lens, is often rapacious, and pushes them into poverty.

Given the above, it should come as no surprise that India is the 8th highest in the world in terms of people spending up to a fourth of their income on healthcare expenditure.

Dr Surabhi Sanjay is doing a travel fellowship in rural healthcare with RHN. She says her stint in a rural hospital has changed her forever and, “made me fall in love with the subject [medicine] all over again!” Dr Surabhi says, “It’s often thought that a doctor working in a Primary Health Centre just treats coughs, colds and fevers. But in fact, in just one year I have seen a wide variety of cases from children with treatable diseases to elderly with terminal illnesses.”

“The stereotype that a rural physician or a primary healthcare physician is simply not ambitious or is doing charity is not true. I think he/she needs to know a lot more than any specialist in a city. Not all of us may finally want to work in rural India, but this experience has changed my understanding of my patients. I see them as  people now, ” says Dr Surabhi.

It is a bright and cold morning in the Nilgiris and the line-up of patients has begun. We see Kamini with her daughter, and the two-year-old is running around happily, talking animatedly as her mother listens.

A year ago, the child was brought to the hospital severely malnourished; she lay listless in her mother’s arms and barely acknowledged anything around her. It took months of hospital and home visits, nutritional counselling and healthcare support before we saw the little one’s eye light up. It also called for knowledge of the community and living conditions of the patient and her mother.

Most importantly, it needed a qualified doctor. A doctor who understood that medicine is a science that requires an understanding of more than just the patient’s symptoms.

Getting to observe and facilitate the progress of a patient over a period of time and investing in the community aspect of medical care is both fulfilling and educational.

Dr Vijaya Vatsa, Internal Medicine Physician at RxDx Clinics in Bengaluru, says that she still remembers the story of the doctor who trekked village to village to deliver polio drops to children and made a real difference.

The practice of community medicine is not new in India. It is concerned with the prevention of disease within and as a function of the larger environment and society. However it has not gained the kind of importance one would expect in a developing country where the investments for establishing high-end hospitals is tremendous, keeping good healthcare out of the reach of the common man.

The Rural Hospital Network wants to bring more doctors and other health professionals to rural India. Recent graduates, mid-career and even retired professionals, do not know about careers in rural areas and the opportunity to serve those in need. Usually, only stories of deprivation and inaccessibility are heard. There exist robust social lives and the chance to explore, live and work in little-known corners of the country. In this lies a deep fulfilment of seeing patients thrive in your care, by making a real difference with your education and skills. At the end of the day, as Dr Nandakumar says, “Follow your heart. Job satisfaction is important, but which job? Of treating patients, or using the best, most expensive technology?”

Featured image is of an ambulance making its way through a remote location in the Nilgiris; image courtesy Rural Hospital Network.