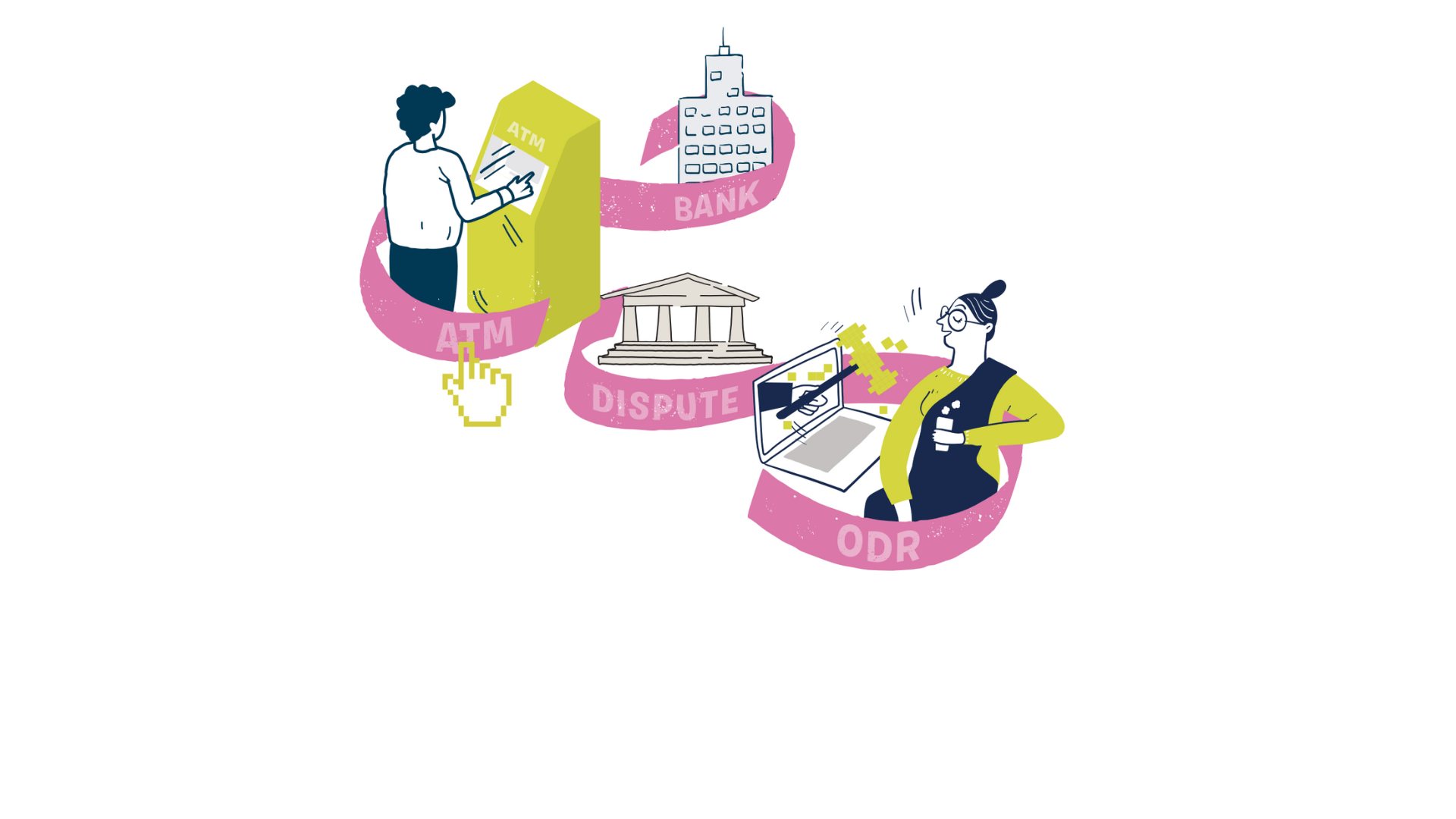 Part three of the #JustTech series builds upon the stories unravelled in parts one and two.

Over 4.5 crore cases are pending in Indian courts. The number of cases filed in a year tends to be greater than the number of cases resolved, continuously increasing the pendency. About 75-97% of justiciable problems do not reach the court, either due to lack of legal awareness, inability to access the court system, prohibitive delays in the system, etc. This number of cases not filed in courts has increased during the pandemic when courts were primarily taking up urgent matters.

As per estimates, the current pendency of 4.5 crores alone will take hundreds of years to be resolved. The courts are clearly ill-equipped to plug the justice gap and effectively and expeditiously resolve the next hundred million disputes by themselves. Alternative Dispute Resolution (ADR) mechanisms such as arbitration and mediation have been able to support the system to an extent. However, challenges associated with needing to physically access ADR centres and high costs remain.

In this context, Online Dispute Resolution or ODR has come out as an important innovation in dispute resolution that holds the potential to bridge the justice gap. ODR-enabled Lok Adalats alone have disposed of over 1.25 crore cases, equal to over a fourth of the pending cases in the court system! Over 100 enterprises have or are in the process of piloting ODR in some form. These scales of Dispute Resolution are no less than a Dispute Revolution. Niti Aayog has termed it the “Future of Dispute Resolution”.  It has been backed by the judiciary at multiple forums and is increasingly being adopted by the likes of RBI.

Online Dispute Resolution is a technology-enabled, collaborative resolution of disputes, outside the formal court system, and often from the comfort of one’s home or office. ODR typically saves 90% costs and 85% time over courts and conventional ADR mechanisms. For example, ICICI bank in its ODR pilot has been able to reduce the average lifespan of a single case from 3 years and 6 person-days of effort per case to 45 days and 0.5 person days of effort per case.

On the surface, ODR is the digitization of Alternative Dispute Resolution (ADR) processes such as arbitration, mediation, conciliation, etc. Yet, the value it creates is larger than the sum of its parts. ADR laws generally prescribe fewer procedural rules than the formal court processes and are technology agnostic. Parties are free to build on top of these minimum rules to suit their dispute. ODR utilises this flexibility to its advantage, integrating key tech-enabled applications like eFiling, eSignature, Video Conference, Data Analytics, Machine Learning, Automation, etc. with ADR, creating a seamless dispute resolution experience. Technology is typically referred to as the Fourth Party in ODR, underscoring the fact that technology in ODR is more than just software, it actively shapes how the dispute is resolved.

A permutation and combination of technologies and processes help mould the resolution process to suit the dispute and parties involved. The parameter for success is not how advanced the technology is but how accessible it is, and whether it equips the widest people to act. In this way, ODR is an independent avenue for dispute resolution, where existing processes are not merely replicated online, but are often re-engineered.

For instance, Aajeevika Bureau, an organisation working with migrant labourers, uses simple phone calls, WhatsApp, and sometimes physical mediation, to resolve grievances like unpaid wages, wrongful termination, etc. Sama, an ODR service provider that partners with various state Lok Adalats, has experimented with a variety of technologies to suit the requirements of the parties and the legal service authorities. It has used a combination of physical signatures and e-signatures, along with low-bandwidth video calls, WhatsApp, a chatbot for common queries, interactive voice response system for its multilingual capabilities, among other technologies. UPI-help, a platform for complaints arising out of UPI transactions, uses pre-set forms for understanding the details of the dispute from the aggrieved party. Outside India, eBay’s Resolution Centre resolves over 90% of cases through an automated process, without any human involvement, through processes like technology-facilitated mediation or negotiation. Technologies like blockchain and metaverse are also being explored for ODR. Kleros offers decentralised online dispute resolution through a platform based on blockchain and uses cryptocurrency.

Ecosystems such as the Sahamati Account Aggregator ecosystem, and Open Network for Digital Commerce (ONDC) are also exploring API (Application Programming Interface) integration of multiple ODR service providers into their ecosystem, so that the users can resolve their disputes seamlessly from the interface of these ecosystems. These one-stop, one-click dispute resolution opportunities will not only enhance the ease of doing business but also give businesses a competitive edge.

Significantly, ODR holds the capacity to expand its infrastructure in proportion to the increase in the number of disputes. Indeed, the number of ODR service providers in the Indian market has increased from approximately 13 in 2021 to over 20 now.

ODR also creates new roles in the process. Professionals like neutrals, case managers, lawyers, and most importantly parties themselves are central drivers of the process. It is empowering that one need not be a lawyer to be a case manager or neutral, and most processes do not even require a lawyer. This human element to ODR is more important at the grassroots level where human intermediation is also required to access ODR in the first place and not only at the resolution stage. In this context, ODR’s potential to create employment and skill development opportunities is worth emphasising. Imagine the number of professionals required by E-Lok Adalats for resolving the over 1.5 crore cases mentioned previously.

While the present leap by ODR in India has been pushed by the pandemic, it has been driven by the motto of justice as a service, prioritising customer experience, and meeting the user where they are in their dispute or technology awareness journey. ODR platforms are innovating to serve their highest potential but are also designing for the lowest common denominator. They show an appetite to serve all kinds of parties – individuals, businesses, governments, and entire ecosystems like ONDC, equipping the widest people to act.

A lot has already been said about how to elevate the ODR ecosystem to the next level. While ODR has the potential to reach the last person, how can ODR realise this potential and become more mainstream? ODR has been pushed by the need to access contactless justice, how can ODR be driven by not an acute need, but an appetite for the resolution of disputes online?

What next for ODR in India?

The real power of ODR lies in the ability to touch every citizen at a grassroots level, across dispute types, whether it be an Adivasi who doesn’t know how to read English or people who want to adopt technology to resolve disputes but through their own dispute resolution mechanism, say a Nyaya Panchayat. One way to do that is by dividing the dispute process into modules that parties and institutions can pick and choose from, giving them the power of choice in deciding how to resolve their dispute to the last level. For example, parties can decide whether they want a hearing, written statements or both, whether they want to e-sign or meet physically for a signature. Players like TERES are increasingly becoming popular that offer tailored services like document management systems, transcription of hearings and automatic e-bundling services.

At the same time, bespoke ODR, designed for specific kinds of disputes, holds the potential to further enhance the efficiency of ODR. For example, the resolution of a labour dispute may require more hearings, whereas the resolution of a commercial arbitration may require the exchange of more documents and possibly no hearings. The types of information required to resolve each of these cases are also very different. The resolution process can accordingly be moulded to suit the dispute type and parties involved. Insurance Samadhan is one such bespoke platform that enables the resolution of insurance complaints.

ODR can continue to experiment with technology to have a more geographically, culturally, and educationally representative user base. An option could be integrating the over 3.74 lakh Common Service Centres (CSCs) with the third-party ODR service providers that exist in the country. The CSCs presently offer Government of India e-Services to rural and remote locations. Another opportunity for integration is offered by ODR service providers enabling Civil Society Organisations in taking their resolution processes online. For example, an ODR service provider can provide the platform on which an organisation supporting Adivasi rights can build its conflict resolution layer.

Parties can also be incentivized to approach an ODR player directly, without the intermediation of a lawyer, since as discussed previously, lawyers are often not required for processes like negotiation and mediation. This can be done through incentives like discounts for first-time users. At the same time, new players in the ODR ecosystem like a platform like Make My Trip for ODR players (Make My Dispute?) can help parties differentiate between ODR players and make an informed choice.

Finally, data is an essential element for enabling the scalability of ODR. Patterns and insights from data can be used to design ODR suited to a particular case type, identify likely outcomes and use that to mediate negotiation and mediation (like in the case of eBay), and design a system for dispute avoidance (where the possibility of a dispute can be identified beforehand and nipped at the bud), and even push these innovations in the formal system. The possibilities are endless. Notably, it can give a transparent picture of ODR to the government, judiciary, businesses and other stakeholders, promoting adoption at scale. We are working in this direction by collaboratively enabling a data-sharing mechanism for the ODR ecosystem.

Can ODR replace the courts? ODR is not designed to do that. Rights-based cases are best suited for courts, in particular cases concerning criminal and constitutional laws. ODR can indeed reduce the burden of courts, so courts can devote quality time to such cases. More importantly, ODR can also meet citizens where they are and provide them with the choice of how they would like to resolve their disputes.

Can ODR resolve the next hundred million disputes in India? Yes, including the cases that are falling through the cracks in the system and are not being filed at all. As Justice Chandrachud says, ODR has the “potential to decentralize, diversify, democratize, and disentangle the justice delivery mechanism”.

Featured image of the role of ODR, courtesy ODR Handbook by Agami.