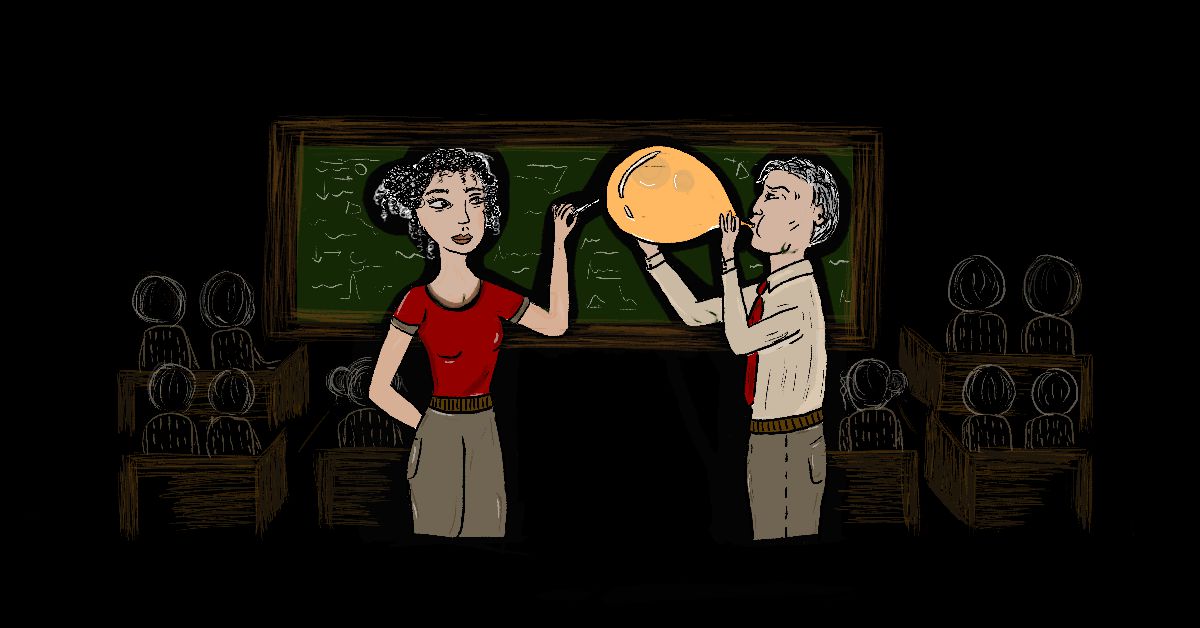 Editor’s note: We recommend reading part one of this series, on the leaky pipeline that women endure from school and coaching classes to the JEE and entering an IIT before sinking your teeth into this story.

Our understanding of the need for affirmative action in higher educational institutions is often incomplete and rife with identity politics. When it comes to women in STEM, pernicious myths abound, with the introduction of supernumerary seats in the Indian Institutes of Technology (IITs). This article busts the most prevalent ones. 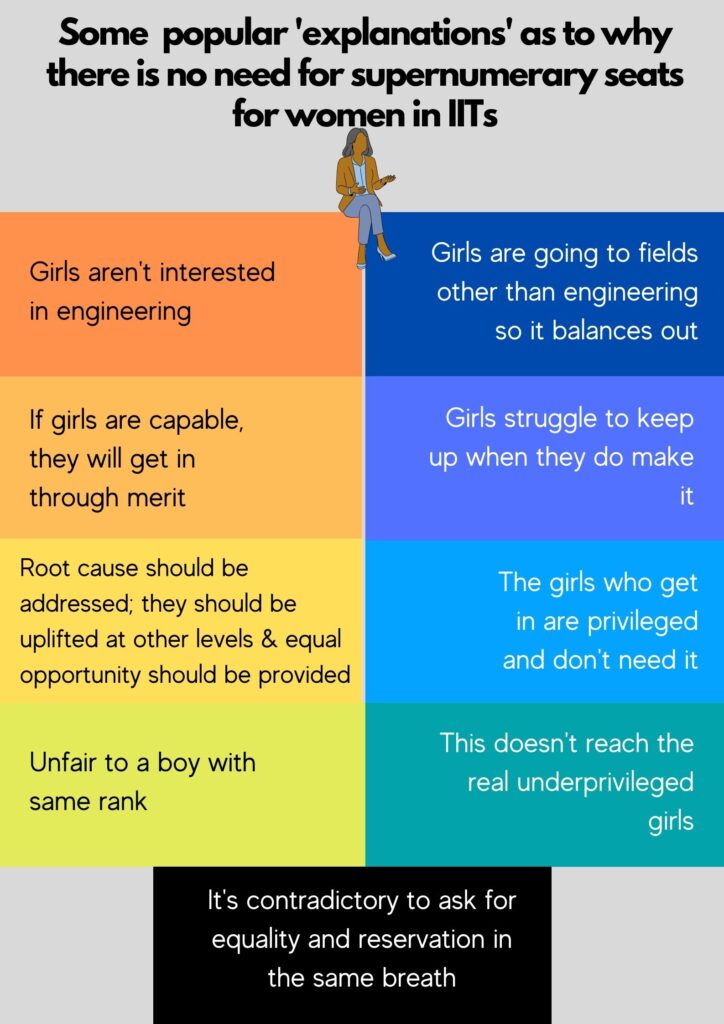 Myth: Girls are going to other fields instead of engineering, so it balances out. STEM is not a big deal.

Bust: As of 2015, only 27% of all engineering students in India were female. One is often tempted to argue that where women are lacking in scientific intellect and vigour, they are amply endowed with emotional quotient, which makes them ‘better suited for, or more inclined towards, other professions’. Surely, in the grander scheme of things, things balance out? Not quite. As of 2017, the enrolment of women in institutes of higher education stood at 46.9%; by this stage, India had already lost 22.55 lakh potential women students. Women are systematically choosing non-professional and non-technical careers. In 2017, amongst all those opting for professional degrees like BTech, MTech, Law and MBA, only 28.06% are women.

Even in the supposedly ‘feminine’ fields, women remain rooted to the lower rungs of their professional ladders or continuously drop out of career tracks. Let’s, for starters, dig into the most widely invoked example of ‘feminine’ fields: medicine. In 2015, a whopping 79.34% of those enrolled in BSc Nursing were women. Women also constituted 51% of the students joining medical colleges. However, a little down the line, at the level of postgraduate and doctoral degrees, these numbers drop to about one-third of the total students. Go a little further down the road, and women constituted only 17% of all allopathic doctors in India. Their representation in positions of leadership and academics also continue to be scant.

Myth: If girls were capable and deserving, they would get into IITs through merit.

Bust: A plethora of structural and societal disadvantages were highlighted in Part 1 of this series; the leaky pipeline to IITs does not make it a pure meritocracy. Supernumerary seats will in fact ensure that meritorious women get a fighting chance into IITs’ hallowed halls.

Myth: We aren’t doing anything to address the root issue. Why aren’t we working towards organically increasing the number of women, instead of adding seats for them as a stop-gap?

Bust: The recommendations by IITs’ Joint Admissions Board (JAB) Sub-Committee for Increasing Female Enrolment don’t end with supernumerary seats for women. They extend to a whole list of actions that IITs are expected to take towards encouraging girls to consider engineering as a viable option from a young age. Further, the document also has a clause for failure, to discontinue the supernumerary program if it fails to induce organic growth in women’s representation over time.

Myth: No women were a part of the IITs’ Joint Admissions Board (JAB) Sub-Committee for Increasing Female Enrolment, which recommended supernumerary seats.

Bust: 40% of the 17 participants in the committee meetings were women faculty.

Bust: Untrue. In fact, even within the supernumerary seats, there is a reservation for economically backward sections, backward castes and PwD students. It is also erroneous to assume that women from otherwise privileged backgrounds do not face any gender discrimination. They are a part of the same coaching institutes that alienate female students; gendered perceptions permeate all sections of society.

Myth: Supernumerary seats dilute the standard of engineers produced. Besides, women will struggle to keep up once they enter an IIT.

Bust: By nature, the Joint Entrance Examination (JEE) rewards risk-takers. Add a time constraint, and it means that you are not necessarily solving for accuracy, but for answering as many questions as possible, which puts women and any others who are conditioned to being meticulous at a disadvantage. Scoring less in a three-hour examination is by no means an indicator of intellectual inferiority.

In fact, research finds no correlation between a student’s JEE scores and how well they do once they enter an IIT. On the other hand, a correlation between board results and performance in college has been found, which again, puts female students in good stead. A study also found that women scored about one grade point higher than their male counterparts on average at an IIT.

Having said that, it is true that IITs today are ill-equipped to deal with non-male students, which may affect their performance. The campus culture can be hostile, and sexual harassment remains an unslain demon. Low female representation makes networking difficult, thereby excluding women from career opportunities later. But, these concerns only get worse when there are fewer women, which makes for a stronger argument in favour of inducting more women into IITs.

What Can be Done to Improve Women’s Representation in IITs?

The JAB’s recommendations for including supernumerary seats in 2018 were time-bound. The scheme is to be implemented for a maximum of eight years, and will be discontinued if:

“I remember my friends who are men talking about how women had it easier and were undeserving of the reservation,” says Krish, who wrote the JEE in 2021. The introduction of supernumerary seats itself seems to have created hostility amongst students, and has found detractors in men as well as women. Some of their arguments hold water, but often, there are also instances of alarming misinformation. For instance, both students in coaching institutes and their instructors are dangerously unaware that these seats are indeed supernumerary or in excess of the normal number of seats, instead believing that they eat into the seats that boys contest. There are stories of instructors in coaching institutes creating a sense of heightened competition and hostility by falsely inculcating that boys’ seats are being taken away to fuel boys’ drive to score more competitively. This is, sadly, in complete disregard for the kind of impact this might have on the girls sitting in the same classroom.

Even after being admitted into an IIT, life doesn’t get much easier for women. Like most responses to affirmative action, women are immediately perceived to be subpar and undeserving, which can be very hostile. Women’s performance is already impacted by a lack of self-confidence in this field; so much so, that some female respondents even wish this scheme went away, so they could have a chance to prove their mettle in their own right. The hostility and low confidence levels impact their participation in class and extracurricular activities.

Also, female engineers in the making have fewer role models to look up to in an IIT, what with the gender ratio for faculty amounting to a paltry 11% in 2014. IITs’ adverts in November 2021 for hiring faculty on a quota for backward castes and economically weaker sections also encourages more women to apply. And how could one forget the dark underbellies of sexual harassment and rampant casual sexism on campus? It is well documented that workplace hostility has been the major driver for women leaving the workforce in America. This serves as a lesson to be wary of the environment created for incoming women students in an IIT, lest we escape one chasm only to dive headfirst into another.

“Am I deserving of supernumerary [seats]? Absolutely, I firmly believe that I am. I did not have the same access to opportunities since coaching institutes were far away and I started my coaching late, says Arpita, who is studying Metallurgy in IIT Madras’ batch of 2019. “I know that I am living up to my potential and believe that I will continue to do so.”

For what it’s worth, affirmative action has proven to be a success story in the West. What was a gender ratio of 15.4% for undergraduate women having degrees in the USA back in 1992 is now a comfortable 50%. Women now enjoy equal cumulative numbers in the workforce too, although they are mostly found doing lower-paying jobs, not to mention their under-representation at the doctorate level and in professional degrees such as medicine and law.

World over, there has also been more conversation about how a beneficiary must accept and take ownership of the ample endowments presented by affirmative action, instead of being bogged down by an imposter syndrome. For example, Michelle Obama prides herself as a beneficiary of affirmative action, fully recognizing how being empowered through education has paved the way for her to pass on the benefits of affirmative action to other women. Obama does this through The Let Girls Learn program for young girls, or through the Career-Life program for women in STEM fields. Simply put, women beget more women.

There is therefore reason to be hopeful of the promise that supernumerary seats possess for women. In fact, based on data-driven simulations, the JAB committee predicts an organic growth in female students within the gender-neutral (non-supernumerary) pool of IITans over the next few years. Yet, that is not to say that the supernumerary seats have had no demerits. The decision has managed to create more hostility amongst students, and has damaged the self-confidence of women, who are the main intended beneficiaries of the scheme. Despite this, one wonders whether these added seats should be viewed as a bitter pill in the short run that must be swallowed for the benefit of the greater good in the future. After all, by virtue of being supernumerary, there are no losers, and only winners—most notably the women who are admitted into Indian Institutes of Technology, and Indian society, which is richer with their STEM talent.

Read Part One: Where are the Missing Girls of our IITs? The Leaky Pipeline

Women are systematically pushed out of the pipeline that takes them from school, through coaching and the JEE, onto engineering college. At each step of this journey, here’s how bright female minds are lost to gender stereotypes and biases, or the ‘leaks’ in the IIT pipeline.

Featured image by Nainika Dechamma for The Bastion.

Where are the Missing Girls of our IITs? The Leaky Pipeline