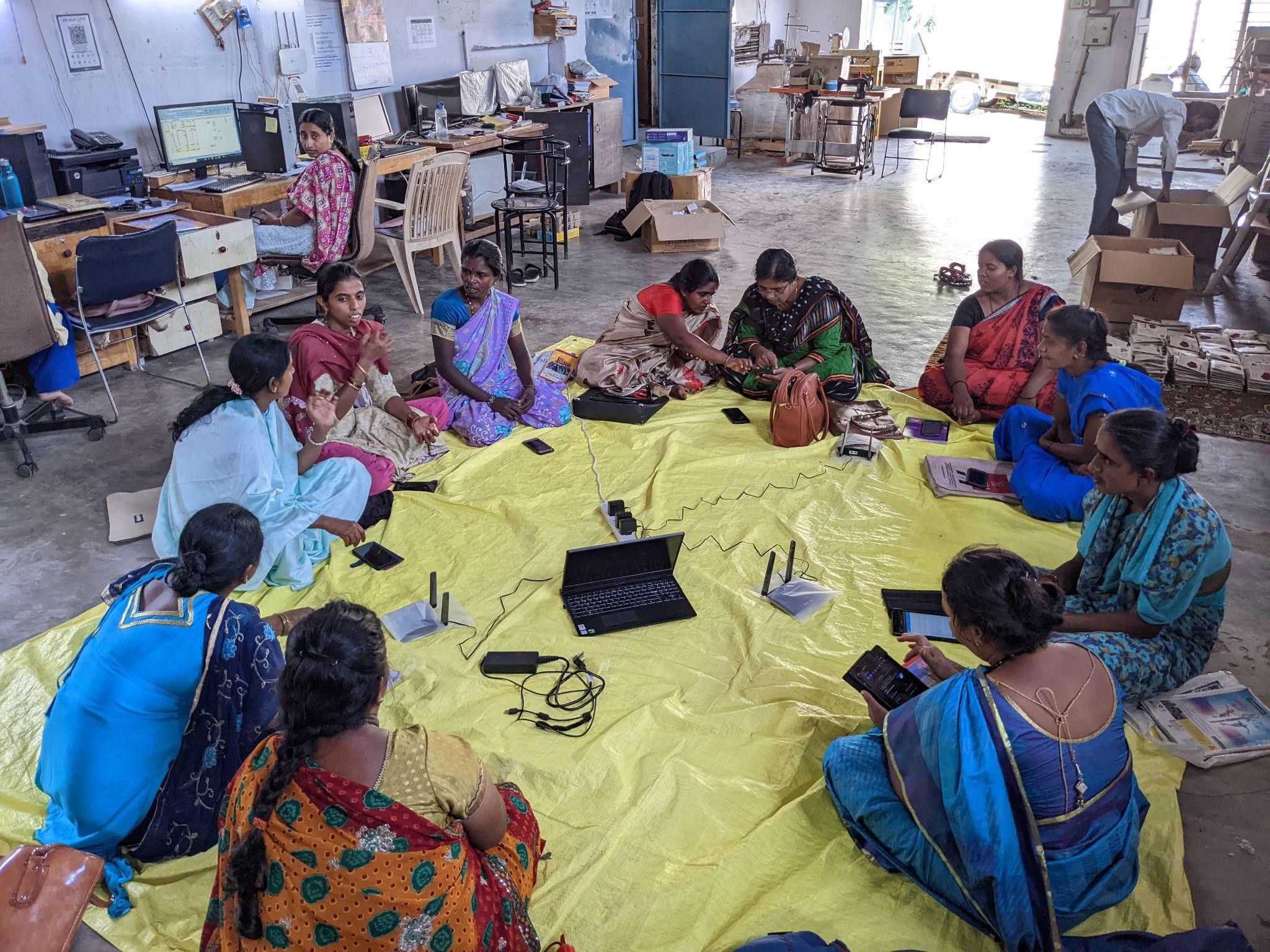 All of our digital lives reside on servers – mostly in corporate server farms owned by the likes of Google, Amazon, Apple, and Microsoft.  These farms contain machines that store massive volumes of data generated by every single user of the internet. These vast infrastructures allow people to store, connect, and exchange information on the internet.

Consequently, there is a massive distance between users and where and how the data is stored, which means that individuals have very little control over how their data is stored and used. However, due to the huge reliance on these massive corporate technologies, individuals are left with very little choice but to accept the terms dictated by these businesses. The conceptual alternative of the feminist server was created by groups of feminist and queer activists who were concerned about how little power they have over owning and managing their data on the internet. The idea of the feminist server was described as a project that is interested in “creating a more autonomous infrastructure to ensure that data, projects and memory of feminist groups are properly accessible, preserved and managed” – a safe digital library to store and manage content generated by feminist groups. This was also a direct challenge to the traditionally male-dominated spaces of computer hardware management, spaces which could be very exclusionary and hostile to women or queer individuals who might be interested in learning how to use these technologies.

There are two related ways by which a server can be considered as feminist. The first is based on who runs the server, and the second is based on who owns the server. Feminist critics have pointed out how the running of servers is often in the hands of male experts who are not keen to share and explain the knowledge required to maintain a server – a role known as a systems admin or, colloquially, a “sysadmin” person. Thus the concept of feminist servers emerged out of a need to challenge patriarchal dominance in hardware and infrastructure spaces, to create alternatives that were nurturing, anti-capitalist, and worked on the basis of community and solidarity.

Consequently, the movement behind feminist servers started to urge a different sort of relationship with the data and how it is stored. In 2006, a group of women called Les Academies du Samedi created a self-learning group to understand how to maintain a server, thereby creating a blueprint for other feminist groups to start their own learning spaces and implement their own servers. While there have been a number of autonomous feminist server projects that have started and stopped, anarchaserver is a project that has persisted to date and offers space to host feminist projects, as well as to archive such projects so as to create a repository of feminist histories.

Why Do We Need Feminist Servers?

Feminist servers are useful ways to push back against the current ways in which corporate technology is perceived. For example, in India, given that most people use Android devices, almost all the services such as email, browsing and search are hosted by Google. Google in turn funnels all the information it gathers from users of these services onto their servers, allowing them access to huge amounts of user data. The danger of this monopoly of data ownership is that user data can be sold to third parties without the knowledge or permission of users, and can be used in contexts that users might be ignorant of. The idea of the feminist server is a decentralised response and alternative to storing data on corporate-owned cloud technologies, thus allowing users to have better control and power over who they choose to share their data.

In the context of working in India with grassroots communities, Design Beku has used the concept of the feminist server to create safe, self-managed digital spaces for these communities to tag, store and archive their own data in a way that allows them autonomy over the content that they are sharing. Low-income, non-urban communities are particularly vulnerable as they have very little insight into how their data might be used against them. Consequently, these servers are not always online, nor are they always connected to the internet – but they are local spaces used by these communities to store knowledge and information useful and important to them. Design Beku has been working with different communities in various localities to explore the potential and possibilities of feminist servers.

For example, in  Channapatna, a town about 80 km southwest of Bangalore, Design Beku is engaging with health worker communities to not only co-develop a local health knowledge archive but also to co-design and set up a stand-alone, decentralized digital infrastructure. This has taken the shape of a Community Owned Wireless Knowledge Infrastructure (COWKI) that enables communities to co-create local knowledge repositories and offer meaningful digital services.

The community network supports and gives access to a local server at Channapatna that runs Papad. Papad is an open-source tool co-designed with the health workers enabling them to collect and annotate audio and video recordings about local health experiences and knowledge. Papad is accessed across different devices on the community network- high-powered laptops for video and audio editing, server management, etc. Papad enables collection and annotation via audio, image, video and text, and is accessible both on the intranet at no cost within the mesh network and via the internet off the Sim-routers at a low, shared cost.

The Channapatna Health Library currently has about 20-25 curated audio and 50-60 multimedia artefacts of community health knowledge, including health experiences, traditional practices and local resources. This is enabled by Knowledge Service Providers, who are the 12 women Health Navigators (HNs) creating the knowledge artefacts with an aim to be local content service providers, and co-own and manage the infrastructure and the Health Library, with co-designed tool-kits and training processes to support the content collection and co-curation work. 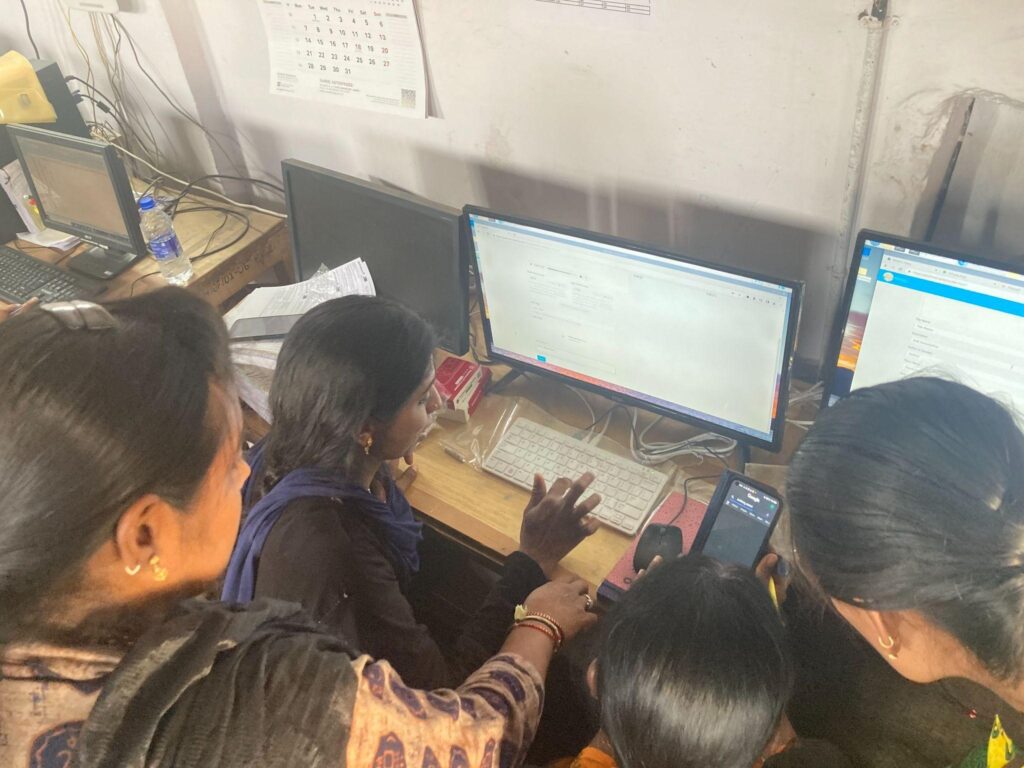 The 12 HNs work with a total of 3000 households in and around Channapatna, enabling them to co-create a unique, locally relevant digital resource for community-driven health advocacy. The HNs are women belonging to socio-economically marginalized communities and through COWKI they also enable their communities, particularly the elderly, women, and children to access the internet for meaningful engagement with the content. This is both through communal spaces such as shared Raspberry Pi Engagement studios in schools and health centers, and hotspots within homes enabling access via individual smartphones.

Another project exploration is Co-creating Local Knowledge Network (CLKN), which involves a location-based exploration to co-create a safe digital space to record and archive knowledge produced and owned by women and non-binary groups in Bidar, Karnataka. CLKN looked at their practices in a socio-cultural setting such as songs, music, and folk practices. The collaboration was with four groups located in and around the old city of Bidar – Khidmatgar (Women singers and storytellers of the Sufi saint who ask ‘mannat’ on behalf of the visitors in a Dargah); a group of Urdu writers; a community called the Bhooteru (a non-binary gender group who are devotees of Bhavani Mata) and the Kumbara (an occupation based community who make clay products).  Using a people and place-centric approach, the groups co-developed a framework known as ‘People as Nodes’,  which explores how to mould the technology to the existing socio-cultural setting.

The CLKN project was started in collaboration with Janastu, a non-profit organisation providing free and open source (FOSS) solutions to community-based and small non-profit organisations. The team comprised residents of Bidar, as well as members of the Living Labs Network. The team had worked together since 2016 with several communities and thus already familiar with the performative practices such as Gondhal by Bhooteru, Janapadagalu (folk & bhakti songs) by Khumbara women, Urdu fictions by women writers, and khidmat ke geet (songs of praise & favour) by Khidmatgar women in Multani Pasha Dargah. In the early stages of CLKN, a workshop was organised to learn about the open-source tech used for a community-owned Wi-Fi mesh. However, we realised that because not everyone can grasp the workflow of setting up an open-source mesh network infrastructure, two different strategies were necessary.

First, a prototype of a recorder and router was designed by Janastu that allowed community members to record their stories and songs and upload them onto an ad hoc local server. It emerged from an experimental approach that the local mesh network as social-tech needed reimagination for the groups in Bidar. The intent of setting up the local mesh network was to facilitate a dialogue on ethical practices to co-produce a community-led and owned digital archive of their practices. The idea of archiving was in many ways inherent in their practice through rituals, stories, myths and so on that are passed over generations. The device partly helped to address the challenge faced by CLKN team to introduce the idea of a community-owned archive (on a feminist server) to the four groups.

Second, for on-ground engagement, a set of methods consisting of recording, annotating, and re-narrating called ‘People as Nodes’, were co-created. Rather than a router in a mesh network, the People as Nodes approach involved a person acting as the interpreter between two different communities, facilitated through workshops. An understanding of the social context meant that we had to rethink how to simulate the mesh network and the possibility of a safe digital network it can create, similar to the constantly evolving social networks and groups that are maintained, where these groups felt safe and had a sense of belonging.

Prior experience has shown that co-creation requires a sort of slowness in thinking, rather than jumping to a technological solution. One needs to be mindful of the alterations that such a digital network can make to the existing social relationships. In order for a Community Network (CN)  to be used, the digital commons created by the network have to be demonstrably usable and useful. This requires time and continuous learning with the CN and requires building collaborations, possibilities, and co-developing alternatives. The Community Owned Wireless (COW) mesh is not a solution but provides conditions for the exchange of knowledge between the communities.

Can Everyone Own Their Own Server?

Feminist servers allow for an imagination of the internet where the network is owned and managed by communities, thus positing a cheaper, more autonomous alternative to the WiFi networks currently available to communities through corporate vendors. It allows for communities to decide what sort of information they will store on the network, and who might have access to that information. It is undeniable that the learning curve is steep – the time afforded by multiple pandemic-induced lockdowns has enabled even those from non-tech backgrounds to learn self-hosting cloud storage services (Nextcloud) and web hosting content management systems, (such as Omeka, Terrastories, WordPress) all of which are applications required for hosting content on these local servers. However, this degree of effort proved that maintaining servers required an entire layer of maintainers of web services, which essentially means that for now, such infrastructures can only be co-owned with communities until there is a viable system in place to train community members locally.

In order to set up and maintain the mesh networks that connect these servers, technical expertise and an ability to troubleshoot are essential. It is challenging to educate and embed this sort of knowledge in rural communities, as it requires some understanding of technology as well as  English. These experiments are essential though, as it grants greater insight into understanding, engaging, and negotiating what such infrastructures could come to mean for local communities.