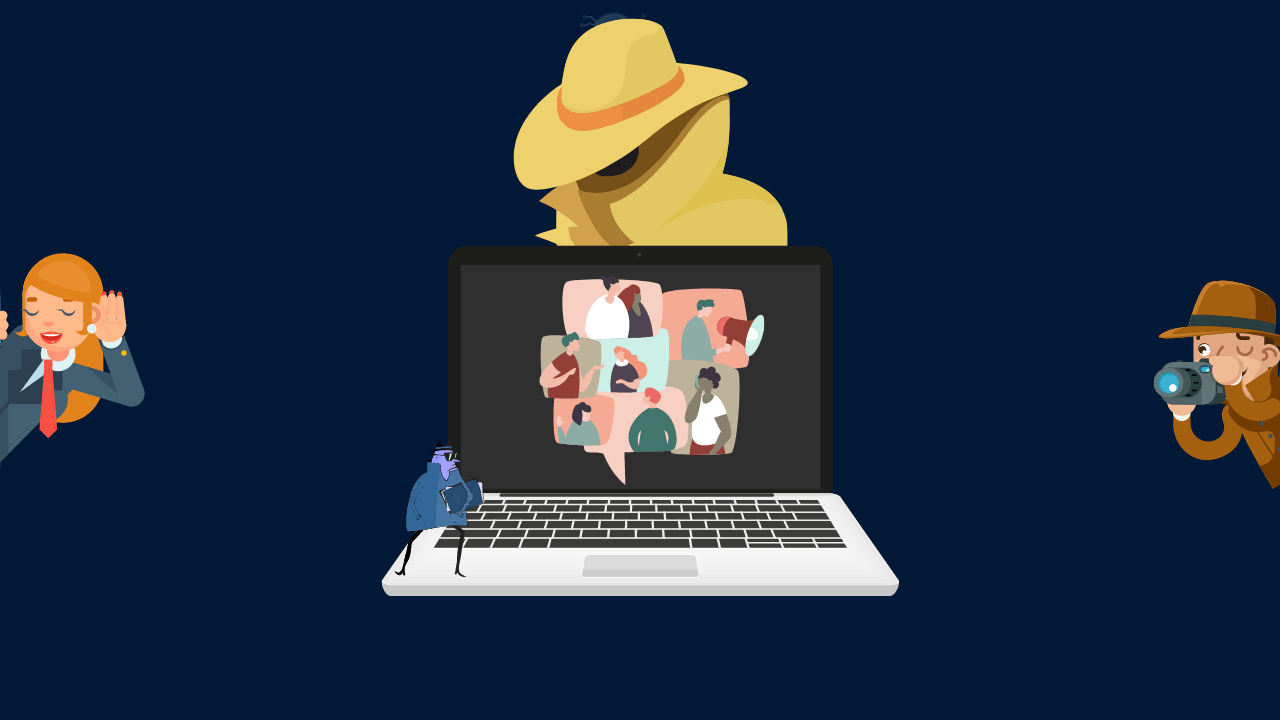 Earlier this month—February 2021—the Ministry of Home Affairs (MHA) launched a controversial programme under its cybercrime unit. Called the ‘Cyber Crime Volunteers Program’, it allows Indian citizens to flag and report illegal and unlawful content found on the Internet.

If left at that much, the program sounds neat and tidy enough. But, as is the case with almost anything to do with digital content and surveillance regulation, the devil lies in the details.

So, what is this program?

“I4C has envisaged the Cyber Crime Volunteers Program to bring together citizens with passion to serve the nation on a single platform and contribute in fight [sic] against cybercrime in the country. Good Samaritans are welcome to register as Cyber Crime Volunteers in the role of Unlawful Content Flaggers for facilitating law enforcement agencies in identifying, reporting and removal of illegal/unlawful online content.”

Here, to sign up as Cyber Crime Volunteers, citizens will have to register themselves on the MoHA’s website, with the I4C acting as a nodal point for all these efforts.

This Still Sounds Alright So Far…

There are several issues that pop up with the Program when one reads through its fine print in just a bit more detail. Fair warning: there is quite a bit to unpack here, so I will try my best to be as concise as possible.

Let’s start with the very idea of citizens surveilling other citizens. It’s not really an alien idea per se; till now, this citizen-led surveillance was more along the lines of ‘if you spot something suspicious, inform the appropriate authorities’. Think of the numerous institutional announcements in metro stations, airports, and train stations that ask you to report unattended objects. These forms of surveillance are indirect and circumstantial–surveillance is only requested of you if something clearly dangerous is in your line of sight. It was never a direct form of continuous monitoring of fellow citizens.

This phenomenon of continuously surveying the actions of your peers is called ‘lateral surveillance’. In their early study for the Centre for Internet and Society from January of 2021, Mira Swaminathan and Shubhika Saluja shed light on what this means:

“Lateral or social or peer to peer surveillance differs from typical surveillance. The power dynamic between the one watching and the one being watched is not structural or hierarchical but more decentralized and balanced; and the surveillance takes place between individuals themselves, without the involvement of any organizational entity.”

But, citizens should be able to flag something that is suspicious to them, no? Yes, they definitely should. On the other hand, promoting a program that encourages active surveillance is harmful. It essentially provides an individual with a bigger outlet for one’s them to act on their biases–with the consequences often playing out against vulnerable communities. An example of this (although perhaps extreme) were the numerous recorded instances of white Americans calling the police to report African Americans for doing, well, nothing. The below instance of a woman calling the cops on a black man drinking coffee at a Starbucks is an example of how citizens tend to act out on their biases–systems of lateral surveillance only feed this internalised paranoia.

@Starbucks The police were called because these men hadn’t ordered anything. They were waiting for a friend to show up, who did as they were taken out in handcuffs for doing nothing. All the other white ppl are wondering why it’s never happened to us when we do the same thing. pic.twitter.com/0U4Pzs55Ci

Institutionalising a program like this will enhance an atmosphere of social distrust, an air that already exists in 2021’s India. As Swaminathan and Saluja say:

“The use of lateral surveillance tools or technologies by ordinary citizens for observing and reporting threats in the neighbourhood normalizes the ‘culture of suspicion’, thus creating potential social distrust. Trust among citizens is based on a mutual understanding about the need to provide security protection and the need to respect rights like privacy in a democratic society. This trust and social cohesion erode when people start putting aside either privacy or security in favour of the other. While citizens become more aware of the various types of criminal activities and methods of prevention, they also alter their behaviour in order to feel more secure and sustain the practice of ‘keeping an eye on another’.”

But, for the government to launch this program, it has to be legally sound, right?

Once again, we’re operating in a grey area, to say the least. Take just the term ‘unlawful activities’ for instance. The MHA website says that unlawful content can constitute anything that ‘goes against’ the sovereignty and integrity of India, or against the security of the state, among other offences. However, these parameters have been called, time and time again, vague or ambiguous at best. The MHA website itself doesn’t explain what any of these parameters actually mean and what potential action online could be considered a breach of them. This is a matter of concern because it is precisely using these vague definitions that the country has seen an uptick in arrests under the draconian Unlawful Activities (Prevention) Act, 1967.

Given this ambiguity in what an ‘offence’ is, how is a citizen cyber crime volunteer expected to perform their actions under this programme ‘correctly’? How can one be sure that this arbitrary power given to ordinary citizens won’t be misused? Addressing this issue, the Internet Freedom Foundation notes,

“Content that is against sovereignty and integrity of India, against defence of India, against security of the State, against friendly relations with foreign States, content aimed at disturbing public order, disturbing communal harmony falls into broad categories whose judicial interpretation lies in a grey area thus giving excessive discretion to a volunteer to determine which content is unlawful.”

So, if one is planning a peaceful protest online—a right that is assured to every citizen by Article 19(1)(b) of the Constitution—and somebody believes this act to be against the sovereignty and integrity of the nation, will action be taken against the individual? With offences decided at the discretion of the offended, it is entirely possible that more and more legally untenable cases–akin to the charges lodged against Disha Ravi–will start cropping up.

Added to all of these ethical concerns are two very important concerns. One, there is no pre-existing standard operating procedure (SOP) for a programme of this nature in India. Having an SOP–or atleast a set of guidelines for execution of duties–would allow the volunteers partaking in this exercise in lateral surveillance to have some direction of which issues are ‘legitimate’ concerns or not.  An SOP could also enable the regulation of the programme as well.

Two, to actually sign up as a cyber crime volunteer, no prior KYC required! KYC stands for ‘Know Your Customer’–it’s a verification process used in the banking sector to ascertain the identity of a customer opening a bank account. While KYC’s are useful for many reasons, most importantly, they help prevent fraudulent bank accounts from being set up.

Such rigour in verification seems to be of little interest to the overseeing bodies. To quote the terms and services of the website itself, “For registration as “Cyber Volunteer unlawful content flagger”, no prior verification (KYC) is required. After clicking ‘Final Submit’, direct reporting of unlawful content noticed on the internet or any social media platform/group, website, email, etc. may be done at www.cybercrime.gov.in”. For a program of this nature, including a KYC to verify the identity of the ‘checker’ should be a basic requirement; at the very least, this will allow the MHA to keep track of all volunteers and take action if any misuse occurs.

So, why isn’t this otherwise widely-used verification procedure included? Well, possibly so that the Ministry can maintain deniability–in case of any misuse of the surveillance program by volunteers, the MHA can simply brush any responsibility off their shoulders. This isn’t too far-off an argument, especially because the terms and conditions available on the MHA website explicitly forbid members from associating the MHA’s name to any complaint whatsoever. But, if the ministry is instituting a peer-to-peer surveillance programme of this nature and has appointed a nodal team to supervise complaints, shouldn’t it take responsibility for the complaints that come it’s way as well?

As of now, pilot programmes of this volunteer initiative are being launched in Tripura and Jammu & Kashmir–incidentally, both are highly militarised and securitised territories. But there’s already an issue here. As the Internet Freedom Foundation points out,

“The Tripura and the Jammu & Kashmir press circulars for the MHA’s volunteer programme go one step further and ask volunteers to report content pertaining to, inter alia, “radicalisation” and “anti-national activities” without actually defining which content constitutes the two categories. This could lead to overzealous and overbroad restrictions being put onto the freedom of speech online and could further result in a chilling effect on online speech wherein citizens would self-regulate themselves before posting any content online for fear of being maliciously prosecuted through this programme.”

And they’re right; the impact that lateral surveillance can have on societal behaviour is scary, because it erodes the fundamental unit of a citizenry or society—trust in each other. The MHA may undoubtedly have citizens’ best interests at heart, but a programme of this nature will do more bad than good. Yes, cracking down on harmful content is necessary, but not at the cost of promoting actions that might fracture a society that is already far too polarised than one would like it to be.