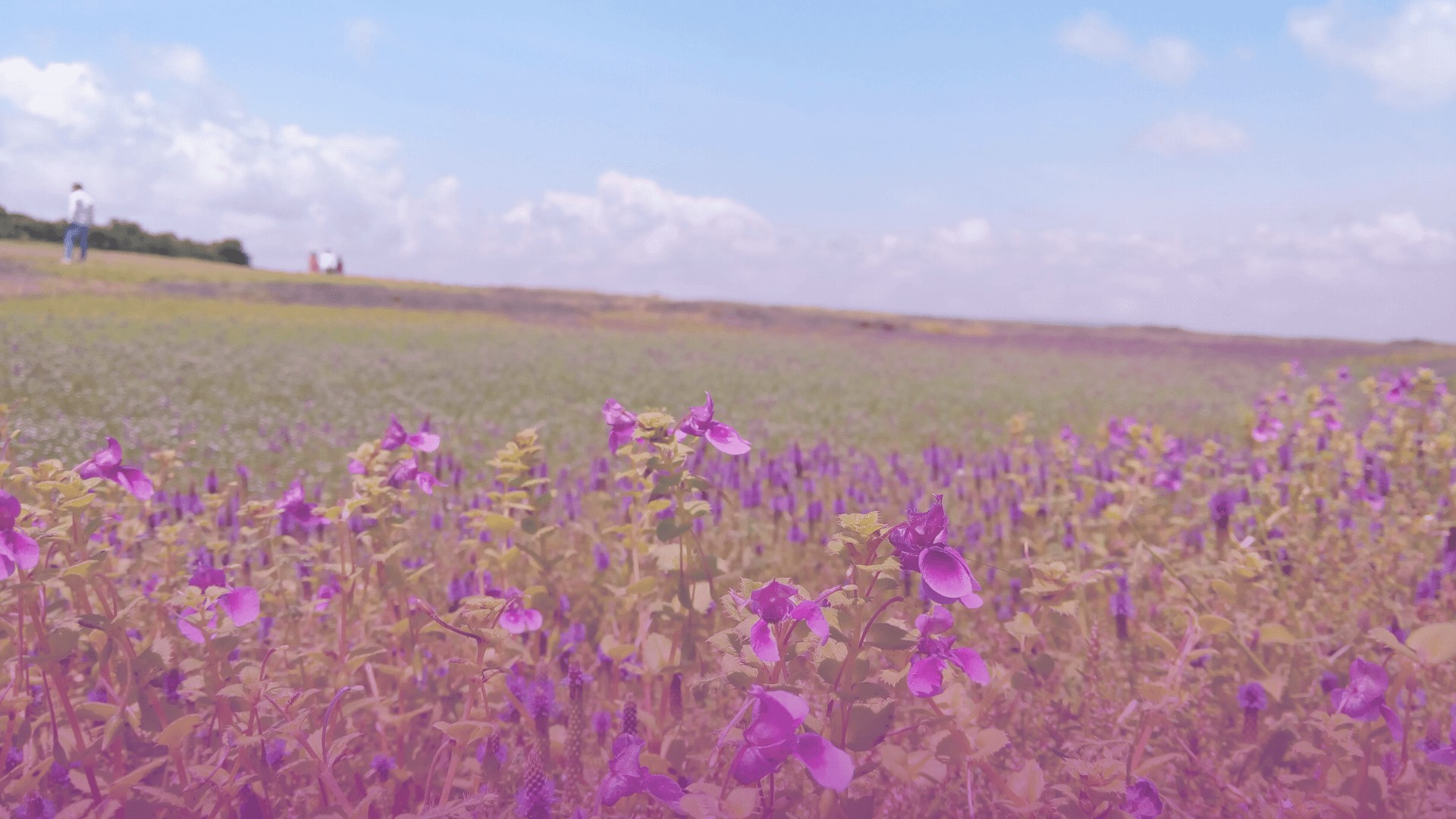 Clear blue skies, lush green vegetation, and colourful flowers spanning as far as the eye can see—this is the sight that greets visitors when they visit the Kaas Plateau, locally known as Kaas Pathar, in the months of August through October. A UNESCO World Heritage Site, the plateau is situated in a particularly unique location in the western ghats of Maharashtra’s Satara District. It is home to over 850 species of flowering plants, a significant proportion of which are endangered. Popularly known as the “Plateau of Flowers”, Kaas is also a tourism destination that attracts lakhs of visitors annually to witness the changing colours of the plateau, flowers brought into bloom by the monsoon.

As a tourism destination, Kaas is one of the few locations in Maharashtra where ecotourism is being successfully practised. According to the The International Ecosystem Society (TIES), ecotourism is “the responsible travel to natural areas, which seeks to conserve the environment, sustain the well-being of local communities, and involves interpretation and education.” At Kaas, these facets of conservation, community, and education are all obvious.

One of the main ways to conserve an ecosystem such as Kaas is to not overburden it with too many visitors through mass tourism. Hence, the number of tourists allowed to visit the plateau at any one time are limited to a certain threshold in the flowering season. In 2012, only 2,000 tourists were allowed to visit per day, however, since 2017, this number has increased to 3,000 to account for the attraction’s growing popularity. Last year, due to the pandemic, there was considerably a low influx of tourists when Kaas was opened for tourists on September 1st.

In recent years, several steps have been taken to maintain the pristine state of the plateau. Personal cars and vehicles are prohibited from entering areas where the main flower meadows are located to reduce physical damage and pollution. To ensure waste management does not affect the plateau, waste is regularly taken for disposal to the nearby town of Satara. This has prevented the creation of a landfill on the plateau.

At Kaas, ecotourism includes the involvement and the well-being of local communities. Prior to Kaas Plateau being developed for tourism, the local community was primarily engaged in agriculture. Now, they are able to derive supplemental income from tourism, alongside their agricultural occupation. Ecotourism began as a multi-stakeholder collaboration between the local Forest Department, local communities and  non-governmental organisations in the vicinity such as Terre Policy Centre, which assists in making annual report cards about tourism at Kaas. The Joint Forest Management Committee (JFMC), which includes members from the villages and a Satara Forest Department representative, was established in 2016.

The JFMC since then has taken over the management of Kaas and has contributed towards its preservation. The money collected from entry fees to Kaas Plateau is used for the benefit of the community as they are active participants in deciding how ecotourism is conducted on the plateau. According to TERRE Policy Centre’s annual report for 2018, most of the revenue generated was used for maintenance and salaries of the villagers who worked at Kaas. In addition to this, over ₹6,00,000 was used to construct parking space for the upcoming tourism season. As a general rule, 50% of the revenue goes towards the development of Kaas; 30% towards developing the villages nearby (water supply, electricity etc); 20% is saved as fixed deposit.

A large number of local community members are also actively involved in conducting eco-tours, with interested individuals trained to work as nature guides for tourists visiting Kaas. One of the many successes of ecotourism at Kaas has been the establishment of local homestays in the area. The homestays provide income for local families, and also facilitate communication between tourists and community members. One ecotour operator spoke about a homestay owner at Kaas.

So there’s a person and he has a house. Next to his house he’s built four or five rooms, which was excellent for us. If I’m going to Kaas, why not spend a little more and benefit the community in a way; especially if someone is being enterprising enough to start a homestay like this in his own house.

Education opportunities for tourists are also a priority at Kaas. In their role as guides, local community members are able to speak to tourists about their personal experiences at Kaas and within the local environment and community. For more academic and scientific learning, trained botanists and ecologists are arranged by tour operators to address tour groups about the importance of biodiversity in the context of the Kaas Plateau.

Working with communities for conservation and tourism are aspects of ecotourism that make it a dream destination for tourists that are looking to engage in meaningful ecotourism. Given the success of ecotourism at Kaas, one might wonder why the state does not further leverage the scope for ecotourism at other natural sites in Maharashtra, such as Gadchiroli, Lonar, and Mahabaleshwar? While speaking to ecotourism providers in Maharashtra, it is evident that all of them face challenges.

Ecotourism providers regard the increasing presence of ‘pseudo-ecotourism’ and ‘green-washing’ as some of the biggest threats to their operations and the industry overall. Pseudo-ecotourism refers to tourism activities that appear to be ecotourism, but do not fully incorporate the dimensions of community, conservation or education in their functioning, while green-washing deceptively markets tourism ventures as sustainable when they are not. For instance, some tourism providers use the tag ‘eco’ to cater to a part of the tourism market that has become environmentally conscious, without actually providing services that are in line with the ecotourism principles.

This  kind of ecotourism is seen in luxury brands opening eco-lodges that are in reality not eco-friendly. Such businesses are on the rise and attractive, which misleads tourists and creates a misinformed notion about the ecotourism experience. Such practices have had an impact on ecotourism providers, such as the ones at Kaas, who prioritise the interests of tourists, local communities, and the environment during their operations. An ecotour operator while recounting his ecotourism experiences shares similar thoughts.

I know a few of them [companies and brands operating ecotourism businesses] who greenwash tourists in the name of ecotourism. They charge exorbitant rates, but do not give them [the tourists] the facilities or an experience of ecotourism. These companies have done more damage while setting up ecotourism destinations than having a positive impact. Primarily, they use marketing to convince people that they are into ecotourism, when in reality they are not.

Policies and laws will be required from the government, but they also have to be enacted in a much more strict and a stringent way for it to be successful.

There is a need to make the system or making the rules for completing processes and procedures easier. [The government should] have one dedicated office, in which a single person will be responsible for giving out all the documents and necessary information. Basically, streamline the process.

In Maharashtra, there is a pressing need for the government and its policies to support ecotourism and make it a success. Bringing in reforms to deal with greenwashing and pseudo-ecotourism could be done by introducing a system of ecosystem certifications and standards. Standards exist for a number of industries and sectors, with proven value, and the introduction and enforcement of a certification system based on ecosystem principles would also be helpful in India and Maharashtra.

Ecotourism certifications are not a new concept, they are common in countries like Australia and Malaysia and help to certify tourism products that have strongly committed to sustainable and nature-based practices. In India, the Responsible Tourism Society of India (RTSOI) is one such body that has attempted to establish sustainable tourism practices in partnership with different central and state governments. At present, the RTSOI has a ‘Self-Audit Certificate’ that businesses can use to assess their performance across different metrics of responsible and sustainable tourism. However, obtaining this certificate is not mandated by a governing authority and is solely at the discretion of tourism providers.

In India, improving ecotourism practices of the industry itself will enhance the perception of ecotourism among visitors. The same benefits of ecotourism at Kaas—conserving the environment, sustaining the local community well-being, and offering an educational experience to visitors—can be experienced at other locations in Maharashtra and elsewhere in India too.

Featured image is of the Kaas Plateau in full bloom. It is home to over 850 species of flowering plants, giving it the name ‘Plateau of Flowers’; Image courtesy: Ashishshetty111, CC BY-SA 4.0, via Wikimedia Commons