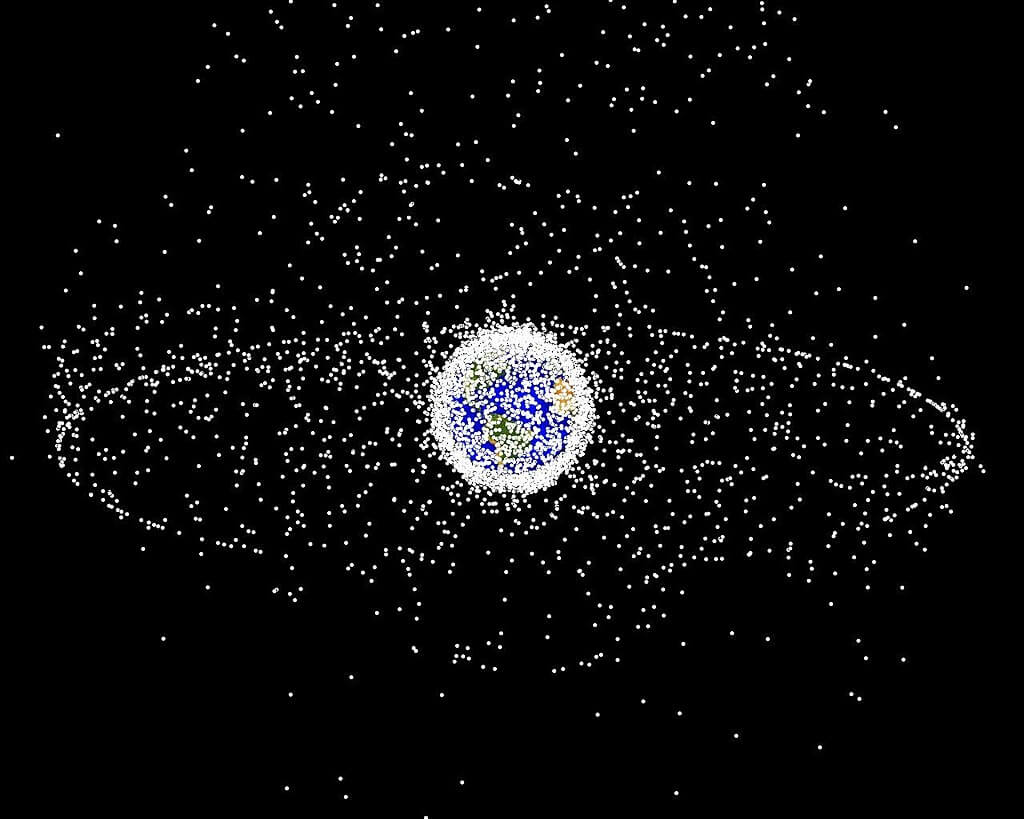 On the night of 2nd April, 2022, people across Madhya Pradesh and Maharashtra marvelled at what they thought was a meteor shower, with streaks of fires shooting across the sky. But, the next morning, when a large ring of metal was found in a village in Maharashtra, it was soon inferred that the previous night’s cosmic show was actually remnants of a Chinese rocket launched in February 2021. This was not a first—in May 2021, another Chinese rocket re-entered the Earth’s atmosphere, crashing into the Indian Ocean, which astrophysicists called the “fourth-largest uncontrolled reentry” in history.

Hurling at an average speed of 27,000 km/h in the Low Earth Orbit [2000 km above the earth], these objects pose a real threat [to functioning satellites], as collisions involving even centimetre-sized fragments can be lethal for a satellite.

“This free-floating space debris is a potential hazard for operational satellites–a collision can leave them dysfunctional,” Dr Kesan adds. As of February 2022, there have been over 25,000 objects recorded as “space debris orbiting the planet”. Of these, India is responsible for 103 active and defunct space crafts and 114 spent rocket bodies. Together, they pose a threat to about 3000 operational satellites which play pivotal roles in communication, commerce, travel, and security systems.

So how does India manage and mitigate the threat of space debris? Before answering that question, we first need to know how nations are held responsible for debris in space.

While the threat of space debris increases with every satellite that is launched into space, the chances of debris actually colliding with other satellites are slim. The chances of debris crashing into the earth and damaging life and property, as in the case of Maharashtra in April 2021, are even slimmer. “The Earth has an advantage [because of] its thick atmosphere, unlike the moon, where every object, small or large, falls on the moon’s surface and creates craters,” says Dr Anil Bhardwaj, Director of Ahmedabad-based Physical Research Laboratory. “Moreover, two–thirds of the earth’s surface is water, and on land, there are still large stretches that are thinly populated. These factors prove advantageous in minimising the chances of damage due to space debris that may land on the Earth.”

Dr Bhardwaj continues, “Considering the intersection that space-tech has with our day-to-day life, it is important that we look at managing this junk not only from a space waste point of view, but also from that of safeguarding our assets in space.” Reflecting this objective, in March 2020, the Indian Space Research Organisation (ISRO) became one of 13 members of the Inter-Agency Space Debris Coordination Committee (IADC). This international governmental forum lays down guidelines on how manmade and natural debris should be coordinated and mitigated between countries.

Coordination Committee aside, the United Nations Committee for the Peaceful Use of Outer Space (UN COPUOS) provides the larger architecture for space governance. Established as a permanent body in 1959, the need for a committee as such was felt in the midst of the cold war—a concern was growing in the international community that space might be used for military rivalries between the superpowers, or that some countries might exploit space and its resources, leaving behind the others. Here, 92 member states—including India—cooperate internationally towards the peaceful use and exploration of space, and utilising space science and technology for sustainable economic and social development. From Space Debris Mitigation Guidelines in 2007 to Long-Term Sustainability of Space Activities in 2019, UN COPUOS has shown serious commitment towards ‘greener’ space operations.

But, there is a catch—member states’ compliance with these guidelines is only voluntary. “These bodies [including IADC] are only a recommendatory body and not a regulatory body,” Dr Bhardwaj notes. An additional limitation is also that there are neither penalties nor incentives to prompt cleaning up space debris.

However, a 1971 Convention does bring to the fore the talk of liabilities, albeit not specifically referring to it as ‘space debris’. This Convention on International Liability for Damage Caused by Space Objects places the responsibility of paying compensation for damage on the earth caused by space objects upon the launching state to pay compensation for damage caused by its space objects on the Earth’s surface. It also lists procedures for settling claims for damages.

In a case where space debris does damage life or property on the Earth’s surface, it’s not always easy to prove which country was responsible for that debris in the first place, and then to establish whether the damage was due to negligence, was intentional, or accidental

Despite limitations of international treaties and guidelines, countries including India have been riding the technological innovation wave to combat this new waste challenge at hand.

It was November 2013, and India had launched its first interplanetary mission with Mangalyaan, the Mars orbiter. When the space probe entered Mars’ orbit ten months later, it was soon realised that a comet named Siding Spring would be passing close to Mars. India’s historic mission stood challenged, as this could have proved catastrophic to Mangalyaan.

“We had to ensure that Mangalyaan and the comet’s tail of debris would be sufficiently apart,” says Dr Bhardwaj. “We then repositioned the spacecraft to the other side of Mars when the comet was to fly by the planet. Such manoeuvring is constantly required in space, and these are challenging decisions that are taken based on permutations and combinations of various factors, like how much fuel we have to reposition the spacecraft without compromising its mission requirements.”  The International Space Station has conducted 30 such collision avoidance manoeuvres since 1999, with the latest two in 2021.

#MarsComet flyby not over yet. Mars passes thru dust tail at 12:57pm PT while orbiters #duckandcover on far side. pic.twitter.com/GxeeXYjVz4

For efficient manoeuvring, the timely availability of crucial information on spacecraft and debris’ positions is a must. To do so, ISRO  launched Project NETRA in 2020. A shorthand for NEtwork for space object TRacking and Analysis, the project is equipped with observational facilities like connected radars, telescopes, data processing units, and a control centre. “NETRA’s observations can spot, track and catalogue objects as small as 10 cm, up to a range of 3,400 km,” mentions Dr Kesan. To mitigate the chances of collisions, NETRA’s observation lab gives timely dissemination of advance alerts on critical conjunctions, along with predicting atmospheric re-entry of derelict satellites and rocket bodies.

While data availability helps in manoeuvring satellites, there are still limitations. “We can make predictions of collisions in space due to human and man-made debris several weeks from now but the question is always of accuracy,” says Dr Bhardwaj. “Noone can be 100% accurate, because there are many factors that continue to change even as the day of predicted collision comes closer, like the density of the atmosphere,  the forces acting, area where the debris might fall, the aerodynamics of it all.”

Apart from managing the space waste that exists already, India’s mitigation measures are now also looking at how to reduce the generation of space waste in the first place.

In 2019, Space Kidz India helped India reach a milestone. ISRO launched KALAMSAT-V2, the world’s lightest satellite at 1.26 kg, made by students under SKI’s guidance. Its predecessor was even lighter at 64 grams, but took a sub-orbital flight; it entered space and came back down to Earth’s surface, without entering the Earth’s revolutionary orbit around the sun. KALAMSAT-V2 also had an additional innovation— the last stage of the rocket which usually turns into space debris was decided to be used by ISRO to convert into a working experimental platform. With this debris remaining functional and helping in research, wealth to waste in space became possible.

“The launch was an inspiration to a lot of students,” recalls Dr Kesan. “After the first launch in 2017, we have to date been receiving student proposals similar to KALAMSAT. While seriously considering the launching of proposed satellites is a separate matter, the fact that we received so many messages and emails made me realise the extent of impact we [Space Kidz India] were able to create on students to begin thinking about such problems and get into such interests.”

Another way of mitigating space waste would be to ensure that no waste remains in space. “Routing the rocket or satellite back to earth for safe disposal is also an option, but a costly affair,” suggests Dr Bhardwaj. “It costs about $20,000 USD per kg to send a spacecraft. You can imagine how costly arranging for a two-way journey then would be.”

Amongst other technologies of destroying space debris instead of letting it orbit the earth, ISRO has also initiated rockets that would “eat themselves,” meaning no waste would be dropped into seas or continue to orbit in space. For this, efforts are underway to forage special material for casings rockets which would combust along with the motors, as well as a ‘kill button’ which could enable the destruction of spacecraft after its lifetime.

India’s satellite traffic is set to increase, with the country securing four service contracts with foreign customers in March 2022. Waste and debris in space that will accompany these are almost inevitable. While technological innovation for managing and reducing space debris is attempting to catch up with the increasing assets in space, it needs to pick up the pace. Perhaps prioritising the issue of space waste and catering for it in the satellites yet to be launched can increase the momentum. The push for this prioritising has to come with the reiteration that humankind’s footprint on the moon—and beyond—is also an ecological one.

Featured image of a computer-generated image of orbital debris, i.e., non-functional satellites, that are currently being tracked by NASA Orbital Debris Program Office