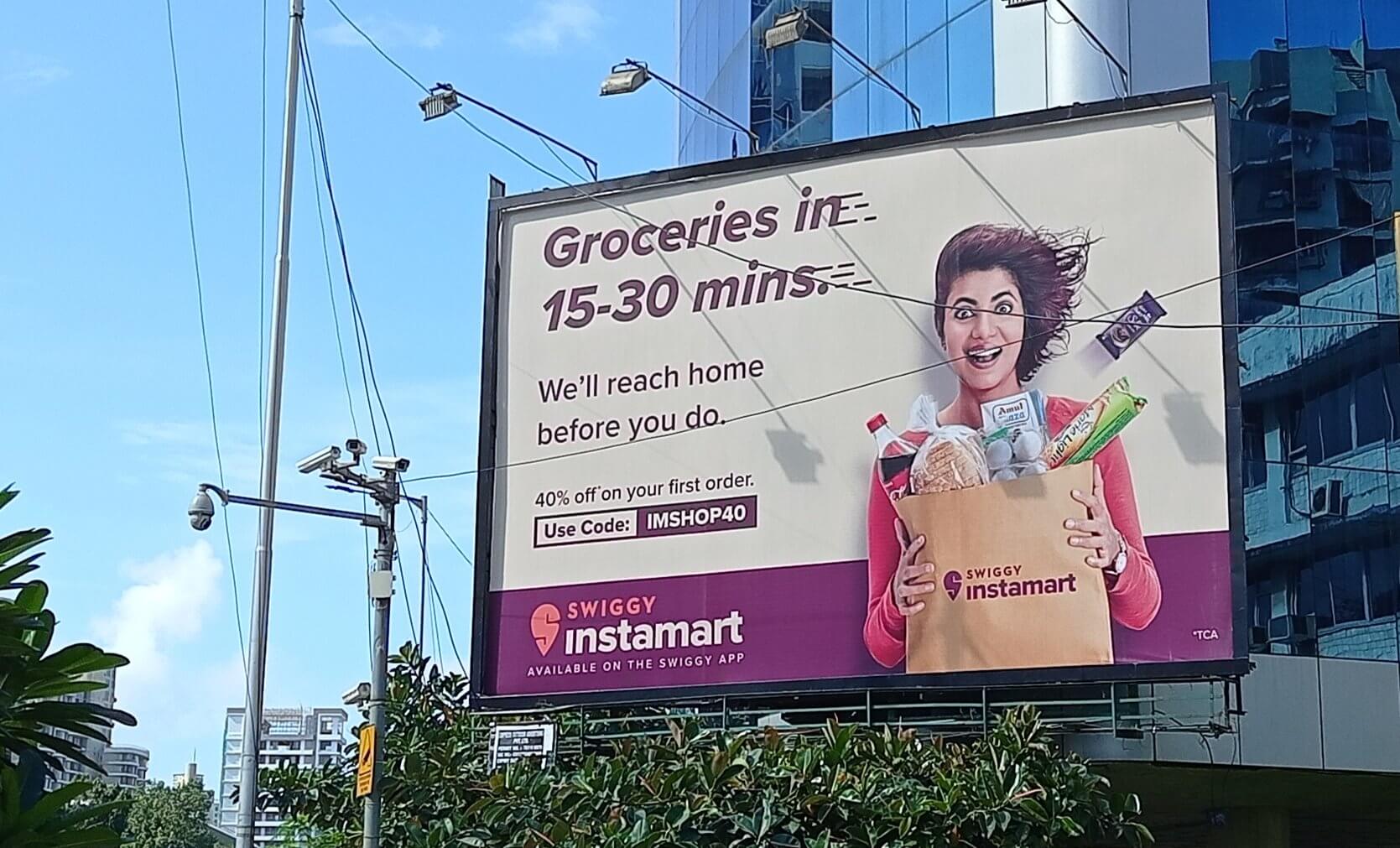 Fueled by venture capital money, India’s gig economy has grown multifold over the last decade, with the recent public listing of Zomato being seen as a key moment of maturation for the sector. In the language of “customer centricity” and “customer obsession”, these companies have offered discount after discount to heavily subsidize the BigBasket-every-week, Zomato-every-meal, and Ola-every-journey lifestyle of the urban Indian consumer.

On the worker front, the subsidies and incentives that made the app-based transport and delivery worker job a seemingly lucrative one dried up quickly. Over the last six years, gig workers have been raising issues about poor working conditions and companies’ false promises of “independence” through regular protests. For the most part, their cries fell on deaf ears, with short-lived attention from mainstream media allowing companies and customers to conveniently ignore this reality. That was until a flux of social media-led coverage and discussion over the months of August and September 2021. These discussions have exposed workers’ experiences in India’s gig economy and provide a lever for customers to pressure companies into providing better conditions for their workers.

Of “Online Chatter” and “Hate”

It has been a little over a month since Soumyarendra Barik’s report in Entrackr where he tailed a Zomato delivery executive for a day to expose their gruelling work conditions. Shared widely on Twitter, the article sparked a series of conversations, most notably from technology startup employees, venture capitalists, and stock market investors, with particular emphasis being drawn to the monthly earnings delivery workers make. Whilst there was no clear consensus on whether the amounts were fair or unfair in themselves, the response on social media served as an important dialogue to bring out the difficulty of the delivery worker job.

The following week, Grofers announced that they were piloting and subsequently expanding their 10-minute grocery delivery service across major Indian cities. This move resulted in serious questions being raised against the company, as the pressure to deliver groceries in such a short time puts already overworked delivery workers’ safety at greater risk.

Handles such as Delivery Bhoy, SwiggyDEHyd, and the Indian Federation of App-based Transport Workers’ usage of Twitter has resulted in a relative increase in awareness around Indian gig economy workers’ lives, particularly amongst the companies’ customer bases. This has led to customers engaging with the information put out by the workers themselves and raising issues with gig companies — a route that is now proving to be a thorn in companies’ social media presence and image. Eager to be seen as more agile and responsive than the legacy companies that their businesses have “disrupted”, gig economy companies spend millions of dollars on their social media marketing and support teams.

A common joke amongst customers is that if there was ever an issue with such a new-age company, just tag the whole founding team on Twitter and watch their support machinery go into overdrive to resolve it for you.

And right on cue, Zomato and Grofers issued public responses to the discussions on Twitter. The team at Zomato is “intently listening to all the chatter about gig workers”, and the CEO of Grofers is ‘heartbroken‘ about Indians that are cynical or envious of those “who are trying to break the status quo”.

Giving Companies a Taste of Their Medicine: The Case of Ridesharing

This strategy of gig workers using social media and subsequent customer engagement with these posts seems to be yielding some positive early results. The irony of the approach here is that customers have seen this playbook before, in fact from the gig companies themselves. Taking just one example, in February 2017, the Karnataka government’s transport department threatened to ban ridesharing companies Uber and Ola Cab’s pooling services (UberPool and Ola Share respectively) on account of them being in violation of the local transport laws.

In response, Uber and Ola took to social media and asked their customers to show their support for the services and pressure the government department to reverse its stance by using the hashtags ‘#BLRNeedsPool’ and ‘#BLRDoYourShare’. 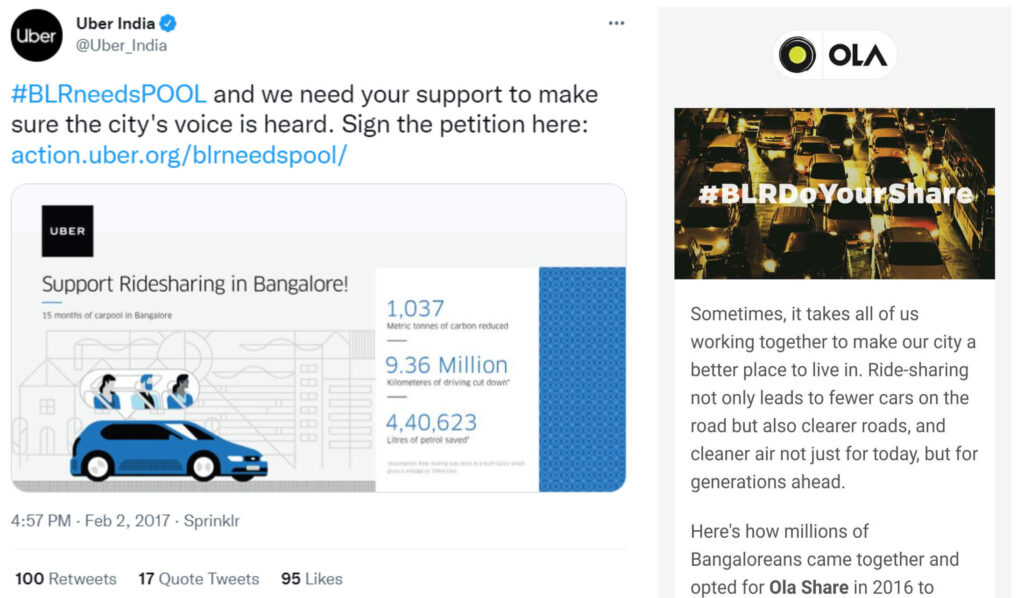 Ola Cabs even used a moral imperative to encourage customers to rally behind them. “Sometimes, it takes all of us working together to make our city a better place to live in. Ride-sharing not only leads to fewer cars on the road but also clearer roads, and cleaner air not just for today, but for generations ahead,” the company stated. Ridesharing services were actually reinstated shortly after in Karnataka.

So, if customers are expected to have a moral concern toward their city, and a company is making claims of improving its living standards, then surely the same company has a similar responsibility toward the workers whose labour powers their services?

The Moral Imperative to Support Workers

With unemployment rates rising across the country, conversations around policy and business have posited the ‘gig economy’ as some kind of silver bullet for job-seekers, with scant regard for the actual conditions of the work, or the social protections that ought to be tied into any decent full-time work relationship. So far, customer engagement with the gig economy companies has been limited to complaints about their service experience, or of issues of safety in the specific case of ride-hailing companies. These attitudes further entrench existing caste, gender, and class divides in urban India.

Customers’ pushback against regressive Resident Welfare Associations that instruct delivery workers to use separate lifts or restaurants that deny workers access to their washrooms are examples of solidarity-building that could address these divides.

Above and beyond thinking about tipping executives on each order, or giving a 5-star review by default, as customers, we ought to support legislation and workers unions that push companies to substantively change the terms of work on these platforms, and provide workers with requisite safety nets. Materially, for customers, this would mean longer wait times, and higher delivery fees.

If these firms are really serious about making our cities better places to live, gig workers are the most important stakeholders in that conversation. The gig workers are talking. Will we as customers listen?

Featured image of a Swiggy hoarding from @DeliveryBhoy