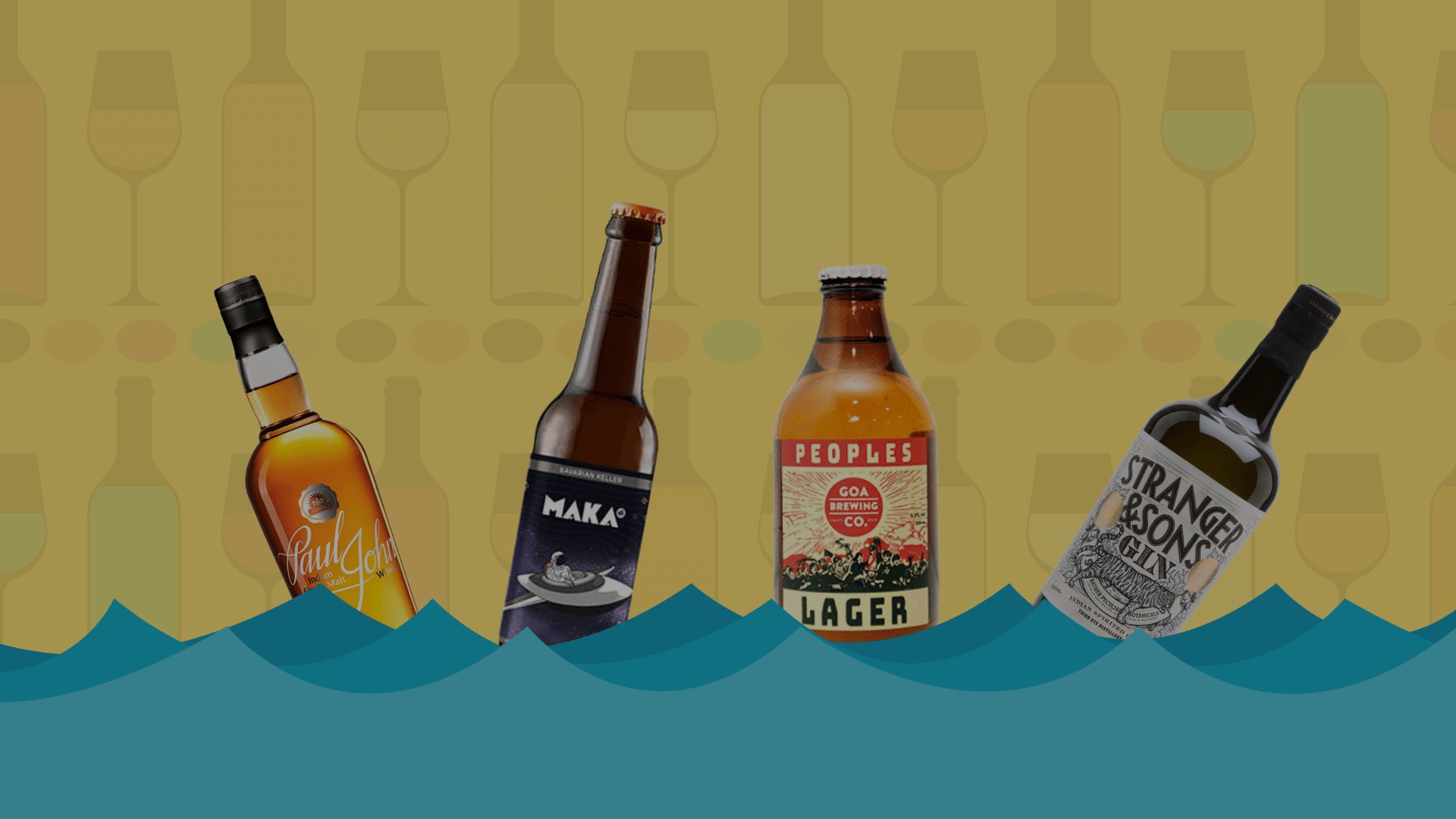 In 2018, Karl Fernandes joined Goa-based Cazulo, a family-owned bottling unit of feni—Goa’s homegrown alcohol made of fermented cashews and coconuts. A trained mixologist, Karl joined Cazulo as a brand ambassador, with a simple motive in mind—to change feni’s image of being “country liquor” into premium alcohol served in swanky glass bottles waiting to be poured into the next best feni-based cocktail.

As he works closely with Cazulo’s second generation of feni bottlers, Karl and the brand find themselves competing against a massive alcohol fermenting market in the state. As of 2021, Goa is home to 92 registered gin and whiskey distilleries, wineries, beer breweries, and micro-breweries. Pick up any recent listicle featuring India’s “best alcohol list”, and beverages brewed in Goa are bound to feature in it. The state takes its liquor seriously—last year, Goa inaugurated India’s first alcohol museum, showcasing old dispensers, bottles, and other alcohol equipment.

“In the last seven years, rum, whiskey, and gin have boomed in Goa,” Fernandes says. “Apart from the fact that excise laws and licence fees are easier to navigate in Goa, the state’s tourism and social scene also makes it the best market to introduce a new product in.”

But Goa’s “party capital” image casts a looming shadow—fermenting distilleries are categorised as “red” industries, or those that are identified by the Ministry of Environment, Forests, and Climate Change as “heavily polluting”. Brewing beer isn’t particularly green either; approximately three to ten litres of waste effluent is generated per litre of beer. So, how has the fermentation boom impacted Goa? Can small-scale producers of liquor like Cazulo Feni offer alternatives to the large-scale production of beer and gin? 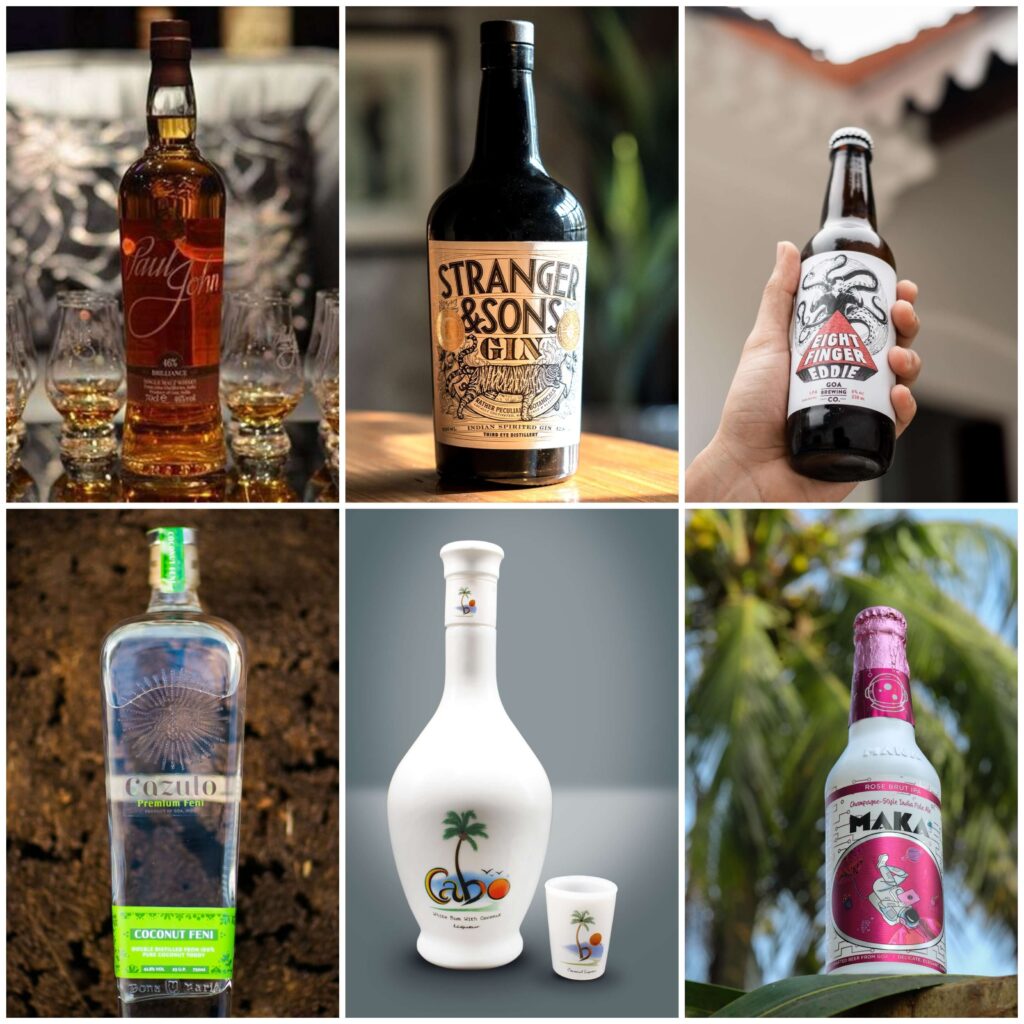 Taking in the Good Water, Throwing out the Bad

For breweries and distilleries, water is a core, indispensable ingredient. “After we source our botanicals [plant-based ingredients], we macerate and distil them with our spirit,” explains Sakshi Saigal, Co-founder & Director at Third Eye Distillery, whose flagship spirit is Goa’s popular gin, Stranger and Sons. “This distilled gin is then blended with water and rested for five weeks before being bottled and shipped. Apart from this need for water, a distillery our size requires at least 15,000 litres of water per day for chilling and cleaning purposes.” Saigal is right: a study from 2003 found that in distilleries in Uttar Pradesh, 34% of the total daily water input was in the form of cooling water alone, used to cool the distilling vessels.

So, what is the source of this water? More often than not, it is groundwater, a problem that was highlighted in 2016 by residents of Amdai, a village close to South Goa’s Sanguem city. Vani Agro Farms Pvt. Ltd was keen to operate a brewery and distillery in the village, a proposal which included using 1,200 lakh litres of groundwater per year, and almost double of that after an increase in capacity. The fermenting units, along with an industrial complex that was being proposed in the area had received No Objection Certificates from various departments, which the residents asked to be revoked.

“The revocation would protect the prime agricultural lands, orchard area, thousands of coconut and cashew trees, Ugem River, and natural water springs,” Amdai’s residents claimed, after they saw over 100,000 square metres of orchard land with over a thousand coconut trees be bulldozed for the project. The orchard was first converted into an industrial zone, which was against the Goa Town and Country Planning Act 1974 and the Goa Land Revenue Code 1978. Then, in 2017, the brewery and distillery were put on hold, pending a review.

Now, six years later, Goa’s groundwater continues to be a precious but depleting resource—while the overall groundwater situation remains “safe”, its consumption has gone up, and 54% of observation wells have shown a fall in water levels, according to a 2020 Central Groundwater Board study. The many functioning distilleries and breweries only add to that pressure.

These fermenting units also discharge effluents into surface water, which has also been well documented.

Goa State Pollution Control Board data of two Vijay Mallya-owned breweries show the threat that they pose to surface water by releasing effluents close to or beyond the permitted limits as prescribed by the central Environment Protection Rules, 2018. For Ponda-based United Breweries, which produces the popular McDowell’s No.1 whiskey, Black Dog scotch, and Kingfisher beer, the Biological Oxygen Demand (BOD)—an indicator of depleting oxygen from water, which goes on to impact aquatic life—was 35.7 mg/l in 2019, well above the standard of 20 mg/l. The PH levels of water discharged by its sister distillery United Spirits Ltd’s have risen exponentially since 2019, touching 8 in 2020, which is dangerously close to the permitted standard between 5.5 to 8.5.

Cuncolim-based John Distilleries Pvt Ltd, which produces Paul John whiskey and Big Banyan Wines has also been a rule-breaker—the total suspended solids since 2019 lurked close to the permitted standard of 50 mg/l, exceeding it in 2021 and earlier this year. A high BOD and suspended solids can cause suffocation and death of marine animals, while consuming water with high PH can cause eye irritation and skin disorders.

Back to Amdai’s Vani Agro Farms context, which is a case marked by many twists. Before the orchard was razed, the Goa Government amended the Goa, Daman and Diu Preservation of Trees Act, 1984 in December 2015 to remove coconut from the list of trees that should be preserved, thereby nulling permissions needed to cut it. With that, an in-principle approval was given to the project developers to construct the fermenting units by a fairly new player in the game known as the Investment Promotion and Facilitation Board of Goa (IPB). The Board’s objective and functioning sheds light on a significant question—what makes it so easy for breweries and distilleries to set up in Goa?

In 2014, a Goa Investment Promotion Act was passed, which gave birth to the Goa Investment Promotion and Facilitation Board (IPB). They then became the go-to authority for all investments in the state that were above ₹5 crore, and would facilitate all approvals and clearances that are needed for such projects from the Central Government. Overriding local laws, the Board can give such “omnibus clearances” to attract more investors in the state, including large-scale distilleries and breweries.

Since its inception, this single window agency has granted in-principle approvals to 196 projects across the manufacturing, hospitality, and service sector. In 2020-21 alone, 10 new industrial units were approved by the Board, which included breweries as well.

But, this all-powerful Board has also drawn flak. A 2015 Parliamentary Standing Committee called the IPB Act a “destructive law”, which should be taking permission from all concerned authorities for project approvals regardless of being a single-window clearance for investments. In fact, a gram sabha in Colva signed a resolution demanding the scrapping of the IPB, an authority they saw as “draconian” and “unconstitutional” since it overrode the functions of the panchayat as well.

“A lot of large breweries and distilleries, especially in Bangalore, are operated by businessmen, not brewers,” says a homebrewer from Goa, who requested anonymity. “Their objective then is to brew in large quantities. And in those types of operations, being a revolutionary brewer who would think about the immense amount of water used, and how it can be recycled is not common to find.”

A rare example is Third Eye Distillery, which has attempted to incorporate sustainability into its brand, conscious of its water footprint.

Since we use a lot of water for our 16-hour distillation run, we invested in a tank that recycles the water. That has helped us bring down our water requirement by 90%. Beyond water, we also use the fruits left after making every batch of gin to make pickles and cordials [fruit-flavoured drinks], and we are mindful of collaborating with brands that have social consciousness built into their DNA.

On the other end of this spectrum of large-scale distilling and brewing lies a beverage at a much smaller scale— beer brewed at home.

“A usual 2000 litre capacity brewery uses about 6 litres of water for brewing 1 litre of beer,” says the home brewer. “They need to do this because they have large equipment, and most of the water used in such breweries goes into cleaning the equipment, or floor spillages. I have a 20 litre set up, and use about 1.5 litres of water for 5 gallons of beer.”

This “brew kit” comes with boilers, fermenters, a sparging tray (which allows for mashed grain to be washed multiple times), a capper, bottle caps, and a few beer recipe boxes to try—all available for sale. The respondent feels that the market for homebrewed beer in Goa is just beginning to pick up, and will take a little time to become an attractive proposition for consumers.

“Some brewers in the United States are also moving towards a one-vessel system, where instead of 2-3 vessels that are needed to mash, boil and sparge, they have started using a single vessel for all the processes, bringing down the volume of water used for cleaning the equipment later. Such interventions can be beneficial for India as well,” the home brewer adds.

Unlike most alcohol, feni and other country liquor do not need as much water in diluting it during the production process. “In authentic feni, 40% of the alcohol is distilled from the [cashew or coconut] fruit itself, so we end up having a much smaller water footprint than other liquors. The lack of dilution is also why feni has a pungent smell and a strong, harsh taste. That’s the association most people have with country liquor like feni,” says Fernandes.

In an attempt to rebrand feni, Cazulo also offers tours through the plantation, the distillery, and follows it up with a tasting session and a meal. Fernandes also mentions how producing feni tends to be much more sustainable. “All feni distillation has to happen at the farm itself, and not factories. So, these are smaller units. At Cazulo, we have traditional Goan distillers who use bamboo to create pipes, use firewood, and clay available locally to make the pots to ferment it,” he adds. “As a brand, we are only keen to grow in an organic way, and not as a mass producer of feni. Our marketing is limited, and we do not want to come to a point where the demand exceeds the supply of feni.”

The brewery and distillery boom is here to stay in Goa. While the new, smaller players offer alternatives, more stringent steps are needed for operating large-scale units. A strict monitoring system of the effluents released and groundwater consumed is a need of the hour, so the state’s natural resources do not come at the cost of that pint of beer, or a shot of whiskey.