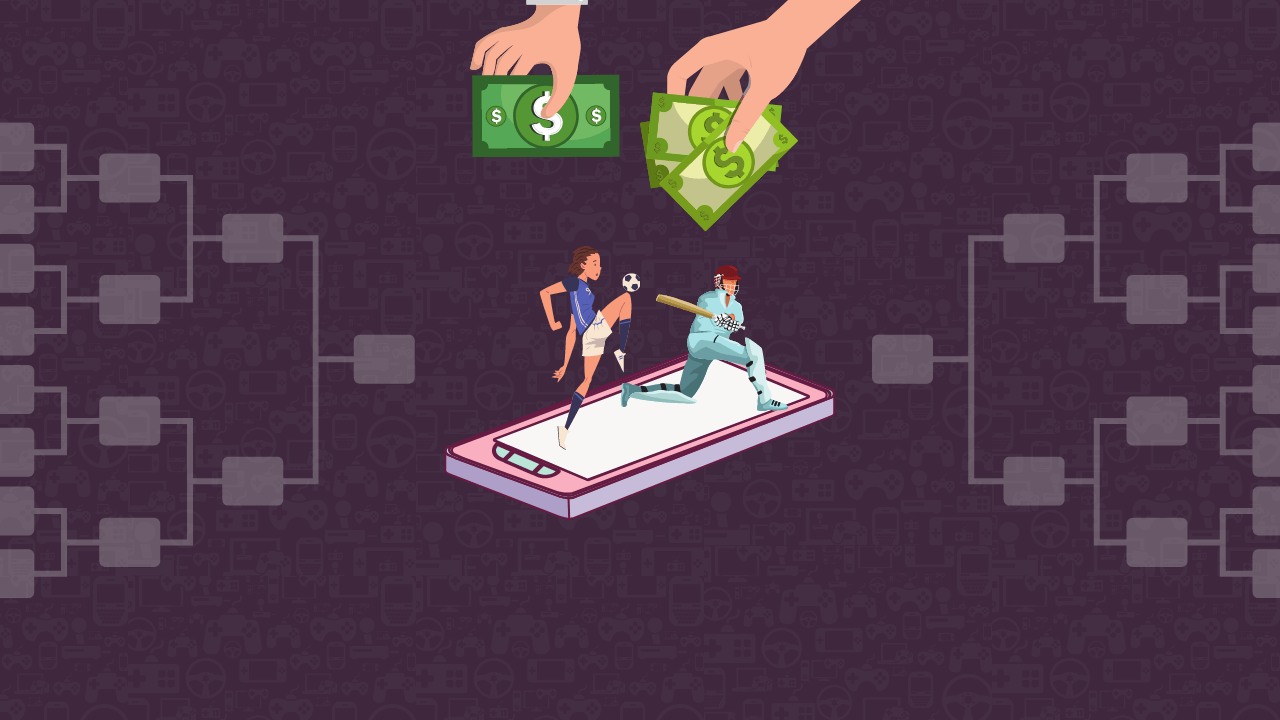 The rapid growth in India’s gaming industry is being fuelled by enhanced connectivity, with a growing youth population having shifting needs of social interaction. Conventionally, gaming has been a console activity, but with increasing digital penetration, the country’s mobile gaming market has flourished. An important part of India’s mobile gaming industry’s growth story has been online fantasy sports platforms (“OFSPs”) that offer fantasy sports contests.

Fantasy sports are essentially online prediction games where users put together a virtual team of real sports people participating in a particular league, such as the English Premier League (EPL) or the Indian Premier League (IPL). These gamers act as managers and score points based on a weighted system that converts real-life player performance into fantasy points.

With a burgeoning market of Indian sports fans and engineering talent, the OFSP industry has the potential to witness exponential growth, innovation and employment over the coming years. This process is already well underway. A recent KPMG report found that the number of individuals participating in online fantasy sports has gone from 2 million users in June 2016 to 90 million in December 2019. This is almost 8 percent of India’s population.

The fantasy gaming industry, which is touted to be a ‘sunrise sector’, is in dire need of an enabling national regulatory ecosystem and a reliable legal framework to operate within. True, most industries benefit from these two factors; the fantasy sports industry is just one with immense untapped potential. For perspective, India recently overtook the United States of America for having the world’s largest online fantasy sports user base. However, it still lags behind in terms of market size and expenditure.

The industry’s deficiencies come from two main challenges. The first, and larger challenge, comes in the form of classifying games into those ‘of skill’ and those ‘of chance’. This classification plays directly into the second challenge, which is that India’s federalism empowers states to legislate on “betting and gambling”.

Games of chance come under the ambit of gambling, and many states outlaw them. The central piece of legislation in this concern, that is the Public Gambling Act of 1867, forbids the operation and visiting of a gambling house, as well as being in possession of a gambling device. The Act exempts games of skill, “wherein a player’s skill and knowledge can influence the game’s outcome”.

The legality of a fantasy sport (involving stakes or money) depends on whether it qualifies as a ‘game of skill’. In Dr. K.R. Lakshmanan v. State of Tamil Nadu, it was held that games of chance are those which are determined purely by luck and “without any application of the human mind”.  To date, three High Courts, namely Punjab and Haryana (2017) , Bombay (2019), and Rajasthan (2020), have analysed fantasy sports. All three judgements have approved Fantasy sports as a ‘game of skill’.

A series of PILs stemming from cases of addiction and suicide due to unchecked online gaming and gambling led to Tamil Nadu, Andhra Pradesh and Telangana joining the list of states that ban online games for stakes or money. Even games like rummy, which require considerable skill (in the context of the 1867 Act) have been outlawed. When it comes to fantasy sports, what counts as a ‘skill’ in a particular context varies across games and formats. In the Gurdeep Singh and Varun Gamber cases, it was ruled that there exists a requirement of “material skill” for playing the fantasy game, and that the players’ success depends on their judgement. As things stand, the Supreme Court has stayed the operation of the Gurdeep Singh case, bringing back the question of how online fantasy games can be uniformly classified and regulated across India’s states and union territories.

No More Papering over Cracks: Towards Uniform Regulation

Fantasy sports operate predominantly via a digital platform, so drawing state lines for the same online game will always be difficult. Some respite for the industry’s players, investors, and creators came in December 2020, in the form of the NITI Aayog’s guiding principles for the national regulation of online fantasy sports in India.

The first of its kind, the draft suggests creating an enabling, “light-touch” regulatory framework with a single, government-recognised self-regulatory body. It goes on to suggest that this body should assume an all-purpose role, with membership for OFSP operators who account for “at least 66% of the registered fantasy sports users in India”. This ‘light-touch’ approach concerns itself with the main principles of regulating fantasy sports, such as advertising rules, age-verification for minors, etc. It leaves specific compliance to ex-post measures and general laws concerning the sector.

Of course, such a body would have to be built upon principles of fairness, independence, and transparency to bring about a semblance of regulatory certainty. Even in such an ideal case, “a challenge in establishing a self-regulatory architecture at the central level is that there could be possible clashes in the manner in which it interacts with the existing legal system [across states],” says Nehaa Chaudhari, a Partner at Ikigai Law. This power given to India’s states, she says, could still “create regulatory uncertainty, even with the self-regulatory body in place.”

At the end of the day, differential regulations create barriers in maximising a user’s gaming experience. Without a clear definition or regulatory guidelines for classifying games as chance or skill-based, the judiciary takes decisions case-by-case. This places the burden of proof on the developer to ensure that their game is in the format of a game of skill, without having the benefit of any clear disclaimers, criteria or administrative fora to work alongside.

A noteworthy example of such a self-regulatory body is the Advertising Standards Council of India, or even the Press Council of India. They have set standards and guidelines for regulation. Regulatory certainty creates a level and efficient playing field for OFSP operators and investors. A unified body also strengthens their position in negotiating with the government on matters such as creating definitions for fantasy gaming, and how state and central governments can be consulted.

The Knock-On Benefits of OFSPs: Sports Culture and Jobs

Besides the obvious benefits of attracting foreign investment, growing the fantasy sports industry also has multiple public interest arguments. Improving the ‘culture’ and engagement of the general public with sports, and generating jobs, are frontrunners.

Playing a fantasy sports game is an immersive experience for the user. It increases their investment in real-world decisions taken by coaches, performances by players, and the result of a particular match-up. With sports leagues becoming more and more global, fantasy sports serves as a tool to increase engagement and active participation amongst viewers. Fantasy sports platforms and leagues have taken note of this, apparent from the Dream 11 sponsorship of the IPL, and MPL Sports sponsoring the Indian Test Team.

An increase in engagement across sports is an important knock-on effect of fantasy gaming. Imagine a situation where there are thousands of OFSP users invested in games such as archery, chess, kabaddi and shooting. This will generate an interest [in knowing] who is winning medals… increasing viewership and user participation will help create a massive amount of real-world engagement with these sports.

A recent report by Indian Fantasy Sports Gaming and Nielsen claims that 37% of fantasy sports players consume more than 6-8 hours of real-life sports content every week. In what is a deeper form of engagement, many users have shown a tendency to begin watching new sports after using OFSP applications. The same report found that 62% of fantasy sports players watch leagues even when their team/country is not participating. While there is no proven causal relationship, OFSPs can increase users’ interest in real-life sporting events; after all, comprehensive knowledge of the sport does help their fantasy teams do better. This is to say that even less-followed sports such as hockey, volleyball and kabaddi can see increased engagement because of a popular fantasy gaming platform.

Investments in OFSPs creates jobs in ancillary industries such as marketing, advertising and sports merchandising. A PWC India report pegs the industry’s capacity at creating over 5000 direct and 7000 indirect jobs over the next three years. It also estimates that this sector can contribute GST revenue worth between ₹3000 to ₹3500 crores over the next five years.

So where does the OFSP industry go from here?

As things stand, companies operating OFSPs engage with state regulators, who then advocate for state-specific regulations. Different laws across states add various compliances onto OFSPs, besides making their prospects in the market more uncertain. At a consumer level, dispute resolution becomes tricky; this is an essential factor in pay-to-play games.

A self-regulatory body’s effectiveness hinges on whether it receives legislative backing. That being said, the NITI Aayog report is a good starting point for the industry and government to come together and strive for uniformity in legislation, redefining incentives for those involved. Such a body must issue clear directives, and an administrative forum to determine whether a game format is ‘of skill’, aiding courts in the event of a proceeding. Acknowledging the potential for online fantasy sports platforms in India, and examining its pain points is an important first step initiated by the NITI Aayog. It is now a question of engaging and negotiating with stakeholders for creating an enabling regulatory framework and uniform legislation which will benefit the economy, fantasy gamers, and maybe even sports culture en masse.

The Damage is Already Done: An Aesthetic Argument Against the European Super League