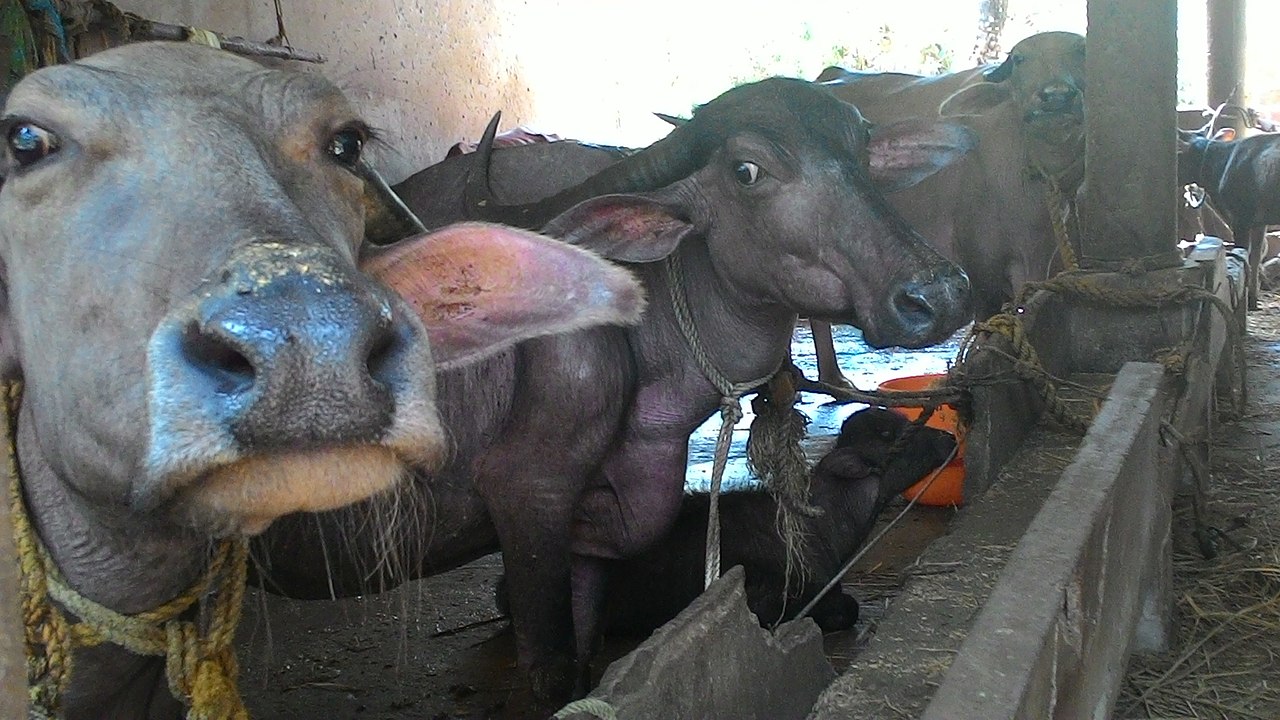 This article is the first instalment of our two-part series on how to better understand India’s dairy sector amidst the climate crisis. Click here to read part two on how nationalist reverence towards the cow ends up diminishing both human and animal welfare.

India’s dairy industry is a force to reckon with. Once a dairy deficient country, today, India ranks as the largest milk producer in the world, accounting for up to 22% of global dairy production. It is also the single largest agricultural commodity produced within the country, contributing close to 5% of the national economy. Unsurprisingly, India is also home to the largest livestock herd globally—which amounts to close to 30.2 crore cattle heads. To put that in perspective: the omnipresent ‘street dogs’ in India stand at about 6.2 crores, meaning that for every single dog on the street, there are five cows and buffaloes.

However, there’s more than meets the eye with this ‘white gold’—deeply tied to dairy are questions of economics, employment, cultural chauvinism, and food systems. The dairy industry intersects with and therefore affects a multitude of issues that lie invisible in our understandings of this mammoth industry.

At a fundamental level, India’s ₹11,35,700 crore dairy industry impacts livelihoods, climate change, caste, religion and animals in unique, intersectional ways. In the first instalment of this two-part series, we explore the industry’s foundations, and how they shape Indian incomes and the environment.

Is Dairy Farming Still An Economically Sustainable Livelihood in India?

With 70 million farmers tied to the dairy industry in India, there is no doubt that dairy is intrinsically tied to the country’s livelihoods.

To boost food sovereignty, food security, and incomes, the government has doled out its fair share of schemes to create a robust, profitable environment for dairy production. As a result, schemes such as the Pradhan Mantri Kisan Sampada Yojana, Dairy Processing and Infrastructure Development Fund, National Programme for Dairy Development, Production Linked Incentive scheme and many more abound.

However, a quick look at this (non-exhaustive) list shows that while the schemes are a boon to supply chain management and infrastructure development within the sector, their ability to help smallholder farmers increase their profitability is limited.

“Despite various schemes, smallholder farmers still do not benefit from the dairy industry,” shares Julie Wayne, Co-founder and Co-Director of Jeeva Bhavana, a pan-Indian NGO  that seeks to empower farmers with ethical and sustainable agricultural practices. “If dairy is such a flourishing industry, why do we not see more smallholder dairy farmers progressing [economically], solely on the basis of their dairy earnings?” she asks.

“Most schemes fail to provide the necessary support to the farmer to run a profitable business. But, since the schemes talk about the advantages and services the farmers will receive, they are lured into hoping that these are beneficial,” shares Sanjeev Naik, Co-Founder and Co-Director of Jeeva Bhavana.

Since most smallholder farmers do not maintain accounts of their businesses, they are not even aware of these losses. “For example, the National Programme for Bovine Breeding and Dairy Development (NPBBDD) focuses on extending Field Artificial Insemination (Al) and provides subsidies for the same [in order to boost the populations of livestock and thus dairy products],” adds Naik.

However, the success rate of artificial insemination is very low in India—just about 25% according to IVRI, Bareilly. This usually happens due to unhygienic farming conditions—which cause diseased semen often leading to the abortion of cows—and a poor understanding among dairy farmers about heat detection.

So, even though farmers receive subsidies for each AI, they have to make multiple attempts to impregnate the cow. “These multiple attempts involve costs [at the outset] which are often not accounted for by the farmers when they think about the viability of dairy farming. The main focus is only on the returns after the impregnation [of the cow],” added Naik.

To increase the chances of producing female calves, the Government of India also recently introduced sexed semen, which costs between ₹700 to ₹1,200 per dose. Farmers require at least three doses to successfully impregnate a cow—the higher costs prove to be a barrier, especially for small and marginal farmers.

Another expense that pinches the pockets of a smallholder dairy farmer is that of fodder. “There is little to no subsidy when it comes to fodder. It is an expense that farmers tend to lose a lot on,” adds Madhavi Kolte, the third Co-Founder and Co-Director of Jeeva Bhavana. The prices of cattle feed and fodder has been skyrocketing, adding to the woes of the farmers. Dry Fodder which was available at ₹50 per quintal ten years ago, now costs anywhere between ₹800 to ₹1,000 per quintal. With no subsidies provided for fodder, the farmers end up making losses, sometimes to the tune of ₹38,500 per year!

There is a 12% gap between the demand and supply for green fodder alone. Lack of fodder means India’s dairy farmers are operating at only 50% of their potential. Is there a way out?

Ramhari Kadam, an ex-dairy farmer from Pandharpur in Maharashtra’s Solapur district, has now switched to growing chemical-free plant foods. When explaining his reasons for the transition, Kadam says, “dairy farming is not economically viable for us farmers. The government keeps roping farmers [into the industry] by giving out subsidies and introducing schemes for dairy and animal husbandry [without making us fully aware of the initial costs of dairy farming]. Us farmers don’t always see this because we keep hoping to gain something out of dairy farming in the future.”

Kadam adds that rural India’s recurring food crises, which are often linked to climatic changes, can become a burden for dairy farmers.

“A cow requires 25 kilograms of fodder on average per day, depending on its age. The issue is that we have to provide for everyone [regardless of what the economic situation is]. So, even during droughts, when people can’t get enough to eat [including our own families], we still have to find [expensive] fodder for animals that we breed for milk. It is highly unsustainable, but no one correlates these factors or talks about it—which [is what] keeps the ‘slaughter industry’ alive.”

As part two of this series will show, India’s dairy and slaughter industries are deeply connected. Yet, alongside draining farmers of their resources, India’s widely-promoted dairy industry also has a role to play in another critical social issue: climate change.

Does Dairy Really Impact the Fight Against Climate Change in India?

“As a general perception, only the energy sector is considered a contributor to climate change. India’s dairy policies indicate a focus on [rearing] more ‘milk-producing breeds’, but not on reducing the flock size of the cattle. This poses a considerable problem [to mitigating climate change] in the long run,” shares Archit Batra, Senior Carbon Business Developer at the Fair Climate Fund. So, why do we rarely hear mention of animal agriculture being a critical contributor to climate change in India?

To begin with, there simply isn’t any emissions inventory maintained by the Indian government. “Livestock emissions calculations are completely client-driven, which means we only end up calculating emissions in areas defined by projects, as opposed to holistic emissions [or calculations that take into account less obvious sectors],” shares Batra. “As there is no standard governmental measure—or need for industries to comply with standards while calculating emissions—there is no way to accurately measure the extent of emissions from the livestock sector [in India].”

Carbon Brief conservatively estimates that the Agriculture, Forest and Land Use Sector (AFOLU) contributes to about 16% of India’s Greenhouse Gas emissions as of 2019, standing only second to the energy sector. However, “more than 90% of these emissions can be attributed to livestock alone, and in most cases, this excludes counting Scope 3 emissions altogether,” adds Batra.

Scope 3 emissions include any and all indirect emissions that do not get counted as direct and electrical emissions by the Greenhouse Gas Protocol, the leading standard to measure and manage emissions. In terms of dairy production, this implies that while emissions from ruminants and waste management are calculated, many others are not. “Emissions from fodder production, supply chains, transport or post-production don’t get calculated within the dairy sector,” says Batra.

Here’s an example of the emissions we’re missing out on. A cross-bred cow consumes about 1,100 litres of water a day. Of this, only 60 litres is consumed by cattle (which is counted), while close to 1,000 litres of water is subsumed under fodder production and consumption (which is not counted). This drastic under-reporting within the dairy sector results in a lack of solutions to bring in the much-needed policy shifts towards the accurate measurement of emissions. Such pushes can be followed by allocating enough funds to reduce emissions, which can be achieved by reducing the overall figures of cattle herds in the country.

Yet, in India, the contributions of India’s dairy industry to income fluctuations, climate change, and pollution are often overshadowed by the elephant in the room: religion. This is hardly surprising, given the ruling dispensation’s widespread (and publicised) interest in implementing ‘cow-friendly’ policies—a product of its Hindutva political philosophy, where the cow is sacred and violence against it is sacrilege. But, as part two of this series will show, when political parties rally around protecting the ‘cow’, they not only dismiss climate change concerns and demonise communities, but allow for the unchecked exploitation of the species as well.