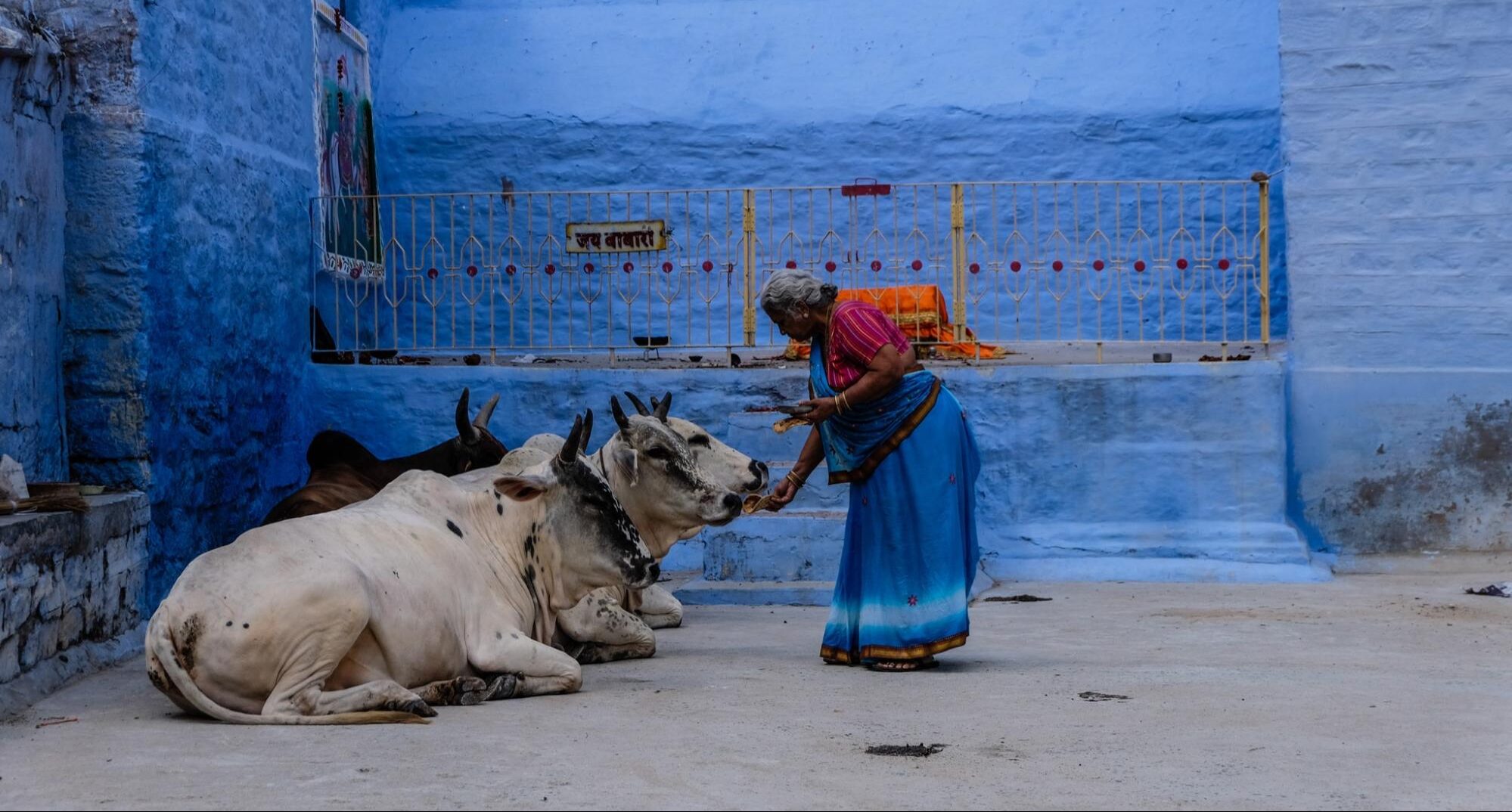 This article is the second instalment of our two-part series on how to better understand India’s dairy sector amidst the climate crisis. Click here to read part one on how India’s aggressive promotion of dairy is increasingly taking place at the cost of both incomes and the environment.

A closer look at India’s dairy industry throws up some interesting insights. As discussed in the first part of this series, undercounting production expenses, and under-reporting on emissions from the dairy industry has far-reaching consequences on climate change, economies, and livelihoods. What’s more, the ‘invisibility’ of these deep issues has resulted in lacklustre policy and industry protocols—current standards fail to take into account the huge mitigation potential that lies within the dairy industry.

In the second and last part of this series, we unravel yet another interesting intersectionality, one that isn’t as overlooked as climate change or incomes, but certainly has been popularly viewed through a skewed lens in India’s majoritarian political and religious arenas. The legal rights afforded to cattle in India, the phenomenon of ‘Gau Rakshaks’, and caste within India’s dairy sector impact Indian lives, animal welfare, and ultimately, the country’s ability to devise robust policies for a sustainable future.

Contrary to the popular belief that a complete ban on cow slaughter is in place across the country, Kerala, along with many North-Eastern states do have provisions for cow slaughter in place. Many other states, such as Uttar Pradesh and Rajasthan, have passed laws to the contrary. The bottom line: the independence-era religious and political issue of cow slaughter in India has resulted in cow protection laws becoming harsher in recent years.

Yet, the reality is that these laws haven’t done much to significantly improve the welfare of the cattle themselves, nor do they address climate change.

For example, the Prevention of Cruelty to Animals Act allows for only 6 large animals or 12 small calves to be transported in a lorry. But, in reality, one would often find close to 50 animals cramped, one on top of the other in lorries, often being transported from states banning cow slaughter to ones that have no such restrictions.

In some cases, cattle cover thousands of kilometres while being transported from one corner of the country to another, or to neighbouring countries. The animals are usually transported at night, and often have to go without food and water for days together. Instances have also been reported of late where traffickers have resorted to applying chilli paste in the eyes of the cattle to keep them from sprawling on the floor and dying while being transported.

Poor implementation of the existing laws has resulted in there being little to no difference in the treatment of cows from an animal welfare standpoint. The laws also fail to take into account the various cultural and socio-economic factors that govern cow slaughter in India. Owing to this, they have proven to be harmful to both the animals in question as well as the people of the country.

Recent years have seen an uprising of Indians who have taken on the role of cow vigilantes—or self-styled ‘Gau Rakshaks’, the protectors of cows. They often attack those transporting cattle, regardless of whether the animals are safe or not. Stories and acts of violence by Gau Rakshaks—in the name of non-violence towards cows—are motivated by their concern for a single species.

This vigilante activism has translated into violence against communities whose livelihoods and consumption patterns are deeply tied to historical oppression. They target either people from Muslim communities or other socially and economically oppressed groups ‘associated’ with cattle slaughter. States with the strictest cow slaughter prevention laws have also reported the highest number of lynchings.

Clearly, Gau Rakshaks operate from a narrow vision of animal welfare that is speciesist, sexist and motivated only by the Hindutva agenda. Most importantly, their view appears myopic at best—their criticism fails to take into account the conditions of animals in the dairy industry itself, which is replete with issues such as abandonment of male calves, separation of mothers from their calves, constant confinement, and a lack of any significant form of healthcare. Most rescued animals make it to shelters that are lacking in basic resources such as fodder or access to veterinary care.

There are larger ironies surrounding these laws and forms of vigilantism as well. Being the largest dairy producer in the world has one immediate implication on India’s exports. Ultimately, as long as a cow-loving government aggressively promotes dairy, they promote the production of beef too.

India routinely stands as one of the top five beef-producing countries in the world (in fact, in 2016, India tied with Brazil in 2016 as the largest beef exporters globally). India also slaughters four times as many buffaloes as cows and bullocks—although these animals are not offered legal protections. Given the present socio-political climate of the country, ruled as it is by a Hindu nationalist party, this usually comes as a surprise to many.

Yet, this is the case because the Indian beef industry is directly and inextricably tied to the highly-valued dairy industry. The uncomfortable truth is that neither industry can exist without the other, and both are detrimental to animal welfare in their current forms—but in India, the perils of the dairy industry hardly make front-page news the way ‘cow slaughter’ does, a state of affairs ultimately determined by notions of caste, religion, and purity.

For example, once animals in the dairy industry are rendered ‘useless’ after serving the purposes of consumption deemed right by dominant castes—that is, when they are unable to produce milk anymore—it is the Dalit caste that is expected to take up the ‘impure’ job of disposing of this cattle. This is reflected in the fact that most workers in cattle slaughterhouses and leather tanneries in India are from the Dalit or Muslim communities.

These Brahminical ideas of ‘purity’—rather than welfare, whether for people or animals—have formed the base for the endless caste-based discrimination that presents itself within the dairy industry and extends into the slaughter industry too.

The misconception around India being a ‘vegetarian country’ adds to this self-assuredness of those ‘protecting’ cows—allowing for prejudices against the communities who slaughter cattle to prevail. In reality, 80% of Hindus are meat eaters and only a third of socially privileged, upper-caste Indians are vegetarian.

Motivated by the inherent value of life, many animal activists take up a plant-based lifestyle. But, the form of activism opted for by the Gau Rakshaks is quite contrary to this—one where there seems to be no intention of putting a stop to the consumption of milk and milk-based products produced by an industry that regularly exploits the very species they want to protect.

These muddy waters make it hard for organisations with genuine initiatives against animal cruelty to separate themselves from religious vigilantism in India.

Ultimately, at an individual level, we need to strike a balance between honouring food traditions yet also gradually reducing our consumption of products that directly accelerate climate change.

The key here is encouraging flexibility. As researchers recently noted, having environment-conscious nudges on the menu can help encourage more mindful consumption. As The Guardian reports, “diners who read “Each of us can make a positive difference for the planet. Swapping just one meat dish for a plant-based one saves greenhouse gas emissions that are equivalent to the energy used to charge your phone for two years. Your small change can make a big difference” on their menus chose a vegetarian dish 25% of the time, more than double the rate of diners who were shown no message at all.”

At a systemic level, true cost accounting and catalysing the ease of business is another important peg to focus on. “India has many schemes and programmes to support the setting up and running of dairies. However, the same support is often unavailable to those who want to start alternative meat and dairy businesses,” shares Vishwanath.

To make matters even more difficult, the Food Safety Standards Authority of India (FSSAI) recently passed a notification, upon request from dairy giants like Amul, to ban the use of the word ‘milk’ for alternative plant-based beverages. “Practises such as these make it harder for this alternative industry to thrive. FSSAI will do well to stand on the side of these [often] environmentally friendly businesses and augment the ease of business” adds Vishwanath. “A collective machinery of government support, comparable financial incentives, and support from technical institutions to develop and fortify plant milks can go a long way in building resilient businesses that can compete with the behemoth that is the Indian dairy industry.”

However, awareness and enabling policy shifts are only a part of the solution. Dairy will continue to be consumed in India, and regulating the sector becomes an important method to keep in check some of its worst practices and also curb environmental degradation. The government will need to step in and play a stronger role in the effective implementation of animal welfare, as well as pollution control guidelines.

The intersectional flaws of India’s dairy industry are difficult to miss. To begin with, our collective love for dairy needs some reconsideration—while milk products are clearly relevant in mid-day meal schemes and other nutritional services, their overuse in varied forms needs to be curbed. Much of the dairy industry’s problems—and contributions to climate change—arise from the sheer number of animals involved in dairy, and any solution that doesn’t take into account curbing those numbers will be a stop-gap solution.

Featured image: religious offerings being made to a cow; courtesy of Monthaye on Unsplash.