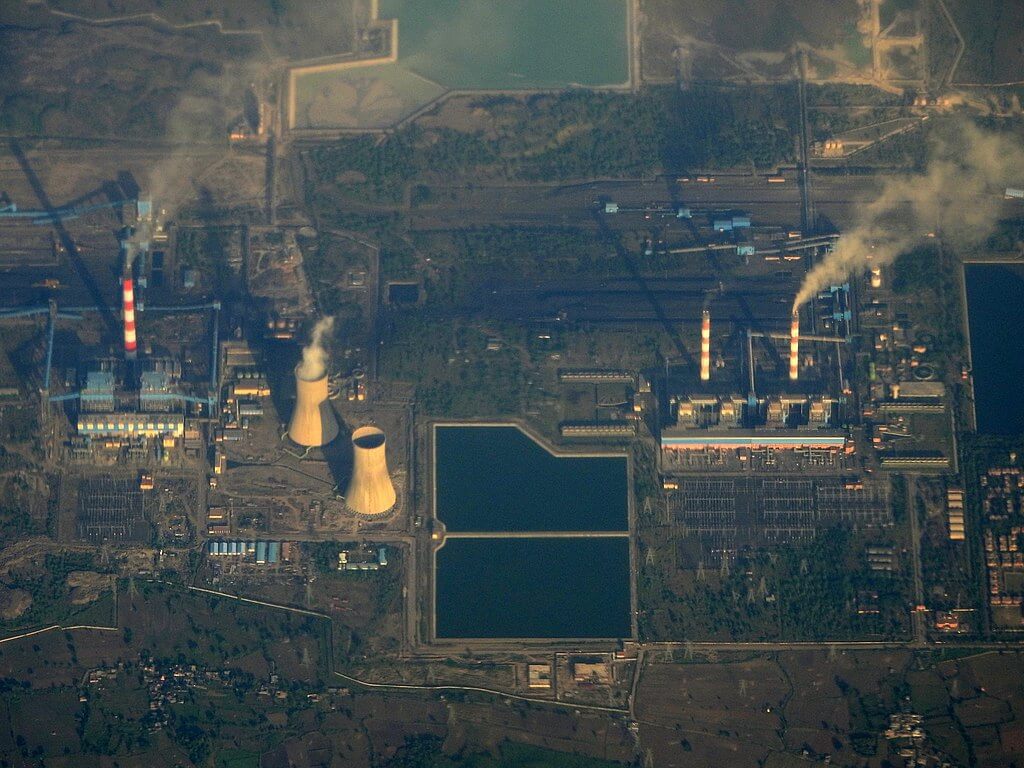 In 2019, Google and Apple found themselves amidst a controversy. They were named in a lawsuit filed in the United States by the families of Congolese children who were killed or severely injured while mining for cobalt. The metal is used in lithium-ion batteries that power not only electric vehicles and solar panels but also laptops and smartphones—millions of which are sold by these tech giants. According to the lawsuit, the miners worked at sites owned by Zhejiang Huayou Cobalt, a Chinese firm with a major presence in the Democratic Republic of Congo (DRC), which allegedly supplied cobalt to Apple, Dell, and Microsoft. The case is still being heard.

China controls 40% of the cobalt mining capacity in the DRC, which is home to a majority of the world’s cobalt. This regular supply of cobalt has helped China shoot to the top of the global electric vehicle market. At the same time, China’s demands for mining cobalt—which is fueled by global demand for cheaply produced electronic goods—has also been responsible for birth defects in infants, deforestation, and river and soil contamination in the Congo. Added to this is the carbon intensiveness of mining the metal. This year, the  CO2 emissions from cobalt mining are expected to touch 1.6 million tonnes (Mt), a figure which is projected to double by 2030.

But, China is not held accountable for these impacts by international monitors. In fact, as of today, no importing country holds itself accountable for the greenhouse gases emitted in countries where its carbon-intensive products are manufactured. Instead, since 2006, countries only account for emissions generated within their geographical borders, as per the current national emissions inventories developed by the United Nations Framework Convention on Climate Change (UNFCCC). With the current accounting mechanisms, a sizable 20-30% of global CO2 emissions associated with trade—such as China’s cobalt imports—are estimated to never feature in the accounts of national emissions.

Last year, new members joined the 100+ countries who declared to achieve “net zero emissions” by 2050. This target does not mean that countries would stop generating carbon emissions completely. Instead, over the next three decades, countries will compensate for the emissions they generate by ensuring that greenhouse gases are absorbed or removed in their national economies.

“But, this is almost a double standard,” Olivia Coldrey tells The Bastion. Coldrey is the Head of Energy Finance and Clean Cooking at SE for All, an international organisation working in partnership with the United Nations. “These countries are making aggressive commitments to limit their emissions at home, but are still financing fossil fuels and associated emissions abroad.”

Clearly, be it through financing coal plants and their associated emissions, or by importing carbon-intensive materials manufactured elsewhere, countries engage in cross-border emissions that they do not account for in their own national carbon accounts. What we have on our hands (and calculators) is a burning carbon loophole.

Yes, The Emissions Generated By Imports Can Be Calculated

As opposed to only calculating a country’s territorial emissions, an alternate approach of ‘consumption-based accounting’ could provide a bigger and truer picture of the quantum of emissions a country is really responsible for. This type of accounting includes all the emissions generated while manufacturing products that are consumed by a country, regardless of their place of production. So, if palm oil production in Indonesia causes massive deforestation and carbon emissions, then when Indian biscuit manufacturers import palm oil from the Southeast Asian country, India will also have to include these imports in its domestic emissions. The approach fits well in a world where critiques of such global supply chains and calls for sustainable consumption have become popular. According to the Global Carbon Atlas, a community research effort by research institutions and independent scientists across the world, if only the territorial fossil-fuel emissions were calculated in 2018 in the United States—the world’s largest net importer of carbon emissions—they would stand at 5,425 metric tonnes of carbon dioxide (MtCO2). On the other hand, a consumption-based approach pushes the emissions to a higher 5,767 MtCO2 for the same year. For the United Kingdom, the difference is even sharper, as Our World in Data shows: territorial emissions hover at 380 MtCO2 in 2018, drastically rising to 540 MtCO2 upon using a consumption-based emissions framework.

In fact, changing the accounting approach also indicates that the United Kingdom’s much-celebrated drop in greenhouse emissions—based on territorial calculations—might be undermining the country’s true role in making the planet warmer. As a World Wildlife Fund report calculates, between 1990 and 2016 emissions within the UK’s borders reduced by 41%. But, using the consumption-based technique would show a much less dramatic change—a drop of only 15%.

For the UK and other developed countries, however, adopting the consumption-based approach is clearly not in their interest. “Richer economies are not as production-based, so they dump the load [of production] onto developing countries, which I believe to be as bad as a potential second wave of colonialism,” says Sourabh Gupta, Resident Senior Fellow at the US-based Institute for China-America Studies. “And as is typically the case with the rich and powerful, they get their way [in international negotiations]. This is especially true in the context of climate change, where developed countries provided the intellectual framework of the issue, and [then] raised awareness about it.”

India, along with Korea and China, are the countries taking the dump of the “developed” world’s production load. In fact, India is one of the leading net exporters globally — which means that it generates more emissions while producing goods that will be exported, than it does on the goods that it imports.

This is why emissions calculated through the consumption-based approach for India become lower. Such is the extent of India’s emissions upon production that for some products like tea, leather, and textiles, as much as 30-50% of the carbon emissions released along the supply chain are attached to goods that are being readied for export.

While these countries might be at the receiving end of carbon emissions, they can play an important role in bringing the discussion on consumption-based emissions accounting to the negotiating table. “Developing nations have to be bold enough to press developed countries to account for consumption-based emissions. So far, India has been going into these negotiations defensively, blaming developed countries for the climate problem and asking for climate finance from them. But, this can change,” says Gupta. “Currently, the European Union is talking of a carbon border tax [this will impose a carbon tax on products imported into the EU which did not face a carbon tax in the country they were produced in]. When they bring in these steps, that’s when developing nations should also negotiate [for more accountability].”

If these negotiations are not held now, the developing countries of the world might miss out on a big opportunity to challenge the global emissions narrative, Gupta alerts. “Today, China’s production-based emissions are much larger than its consumption-based ones, but in 15 years, that will change. Then, China will be in a much more powerful position to find a common cause with the developed world to stick to [using] production-based emissions, which do not account for consuming products manufactured elsewhere. In our [India’s] defensive approach, we cannot miss this real opportunity of asking not just rich countries, but middle-income nations to account for their consumption-based emissions.”

This year, a few scientists took a step further. Instead of only counting territorial emissions, they suggested a novel “finance-based emission accounting scheme,” in a paper published in Environment Research Letters. In this approach, emissions expected to be released during the lifetime of a coal plant located in a particular country would instead be allocated to any country that provides plant-associated financial support, which is another way of filling the carbon loophole.

Large coal plants need big investments to operate. To put this in numbers: between 2014 and 2018, the global direct investment in coal power projects averaged around USD $60–80 billion per year. These are mostly cross-border investments financed by private companies, or public and commercial banks. In some countries like South Africa and Bangladesh, more than a third of the installed thermal capacity is developed with the assistance of foreign countries.

China is a big player too. In 2020 alone, China opened three-quarters of the world’s newly funded coal plants—in the same year, it announced carbon neutrality within the country’s borders by 2060. All in all, China finances a colossal 53,129 MW of thermal power across 56 coal plants globally, including India’s Kudgi Super Thermal power project in Karnataka, which also receives investments from Japan. While China and Japan fund these projects, India bears the health and environmental impacts of them—a 2019 Greenpeace report projects that if this plant continues generating emissions according to India’s looser permissible limits, it would cause 5,345 premature deaths per year in the country. If instead, the plant ran according to Japan’s much stricter permissible limits, the projected deaths would be much lower at 173. 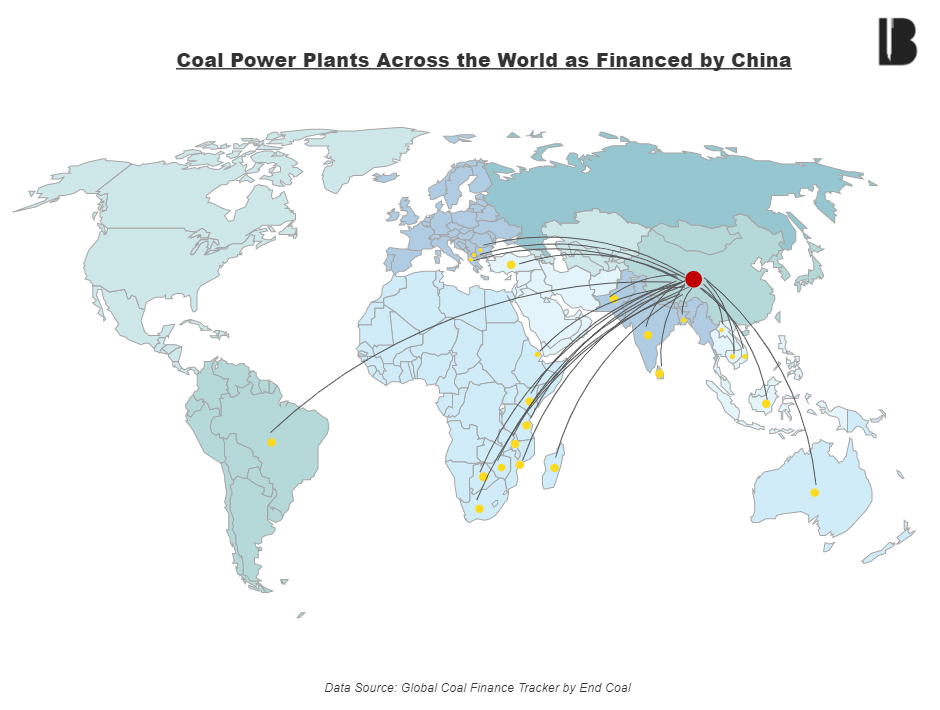 On the other hand, India finances a coal plant across the border in Bangladesh. This 1,320 MW plant was financed by the Export-Import Bank of India; it sits just 14 kilometres from the boundary of the Sundarbans Reserve Forest, the world’s largest mangrove system. Status of Tigers in Sunderbans — a 2016 report by the Wildlife Institute of India — criticizes the functioning of the plant here, as it would encourage commercial boat traffic, leading to “fragmented and isolated tiger populations within the Sunderbans.” It’s clear that as global finance flows, so do the health and environmental costs that they make possible.

“Instead, if countries are interested in financing cross-border projects, they should invest in renewable energy,” says SEforAll’s Coldrey. Worldwide, more pressure is now being generated to move away from financing coal power plants, with the latest directive coming from the International Energy Agency’s newest report. “In the report, the IEA explicitly ties financing with emissions, and it sets out a [global] road map by pushing for no new coal and oil projects in the future. It is encouraging to see some of these conversations happening, that make fiercer connections between finance and emissions. Most importantly, these might translate into UNFCCC accounting for these cross-border emissions in the future,” says Coldrey.

Adding to the optimism, over 100 global financial institutions are now moving away from financing fossil fuel projects, Malaysia’s Maybank being the most recent addition. “Development banks like the World Bank and Asian Development Bank have both recently made commitments to halt financing of fossil fuels to varying degrees. But, country-level responses of commercial banks need to follow, along with their close monitoring,” adds Coldrey. “Hopefully, the ones who are still financing [fossil fuels] will become an isolated lot, which would make their financed fossil fuel projects economically unviable. We are seeing this happen in the State Bank of India’s hesitancy to now finance the Carmichael Coal Project in Australia.”

The factors that shape accounting for cross-border emissions are a complex combination of economics, environmental justice, and international negotiation. But, the conversation has been sparked. It is now time for richer countries to claim responsibility for the emissions they cause in lower-income countries. Developing nations, on the other hand, need to start putting up a united, stronger front to negotiate the inclusion of consumption-based approaches into calculating emissions. Only then will pledges for ‘net zero emissions’ make real ecological sense.

Acknowledgements: The author would like to thank Manan Bhan, a PhD scholar at the Universität für Bodenkultur (BOKU) in Vienna, for his inputs and ideas while researching for this story.