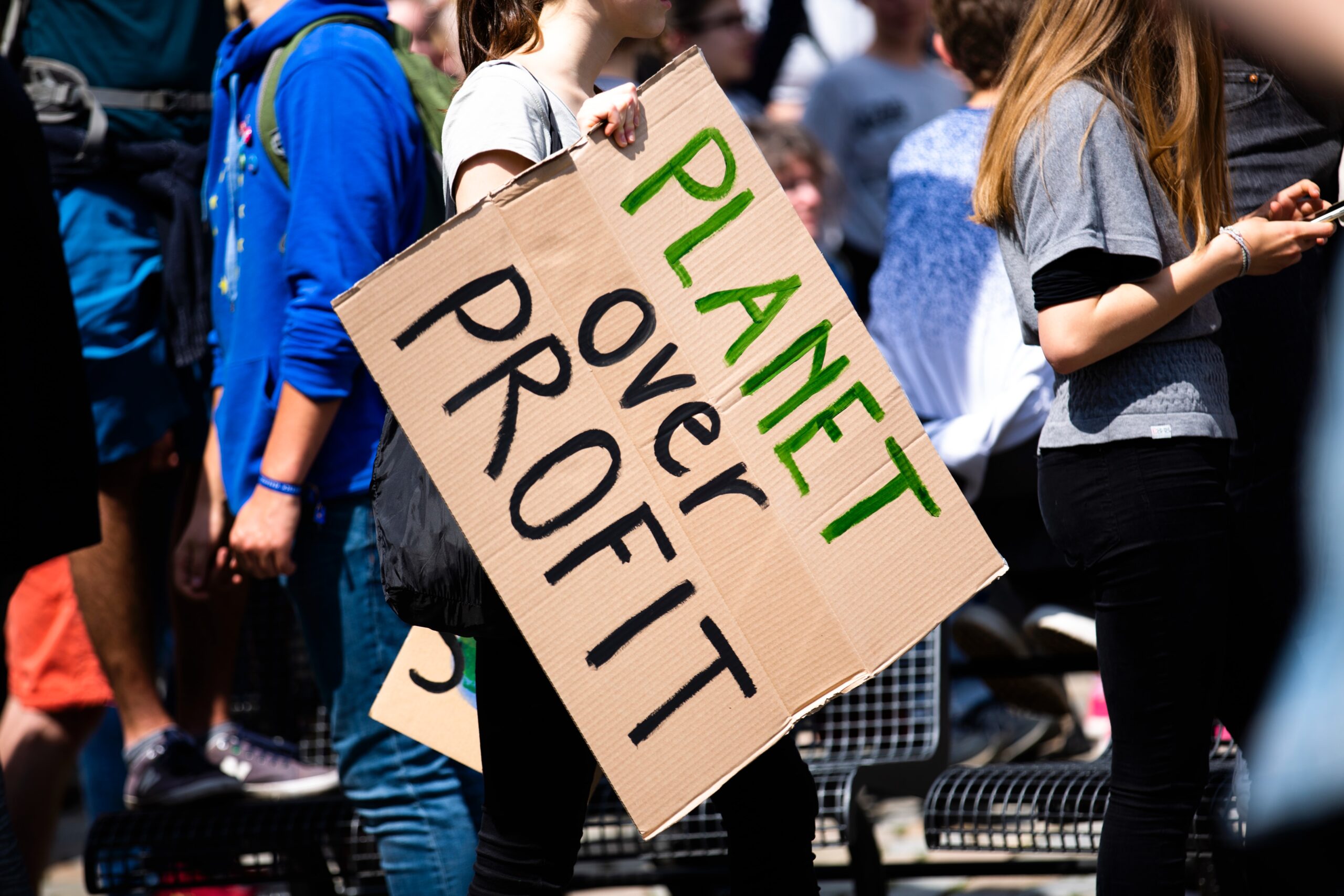 When it comes to climate change’s enemies, there are the usual suspects: large carbon-intensive corporations, negligent governments, and of course, the climate change deniers. But, when two protestors momentarily disrupted the India-Australia ODI cricket match last week, they roped in another nemesis: financial institutions. The young men held placards stating “No $1BN Adani Loan”, with the State Bank of India’s (SBI) logo underneath. A public sector bank became the target of this international protest.

This is just one of the several protests that have erupted against the controversial Adani Group-owned Carmichael coal mine in Australia’s Galilee Basin. While the mine would be the first in this giant untapped basin and would be expected to increase employment in the region, it also threatens to increase carbon emissions, harm the fragile ecosystem of the Great Barrier Reef, and disrupt the water table. But how much responsibility can an SBI—or any bank that would finance such a coal mine—take for its environmental impacts?

As it turns out, quite a bit. After all, large corporations run on money, and banks play an indispensable role to make that money available to them. They mobilise financial resources and provide capital for large infrastructure, which is exactly what SBI is trying to do with its ₹5,000 crore loan to the Adani Group. The agreement has almost been finalised.

In fact, without these financial resources, the Adani Group has been unable to even begin its mining operations, targeted to commence back in 2014. Over the years, at least three major insurance groups and numerous financial institutions backed out of financing the project citing a decline in coal mining in Australia, and by 2015, the Adani Group was reported to be under “severe stress”.  As of November 11 this year, Adani Group’s outstanding debt is more than $30 billion. It is also worth noting that in the 2018-19 financial year, SBI accounted for the highest Non-Performing Assets—or bad loans—in India amongst banks at Rs 6968 crore.

This is not the first time that a public bank is financing coal power plants. In 2019, EXIM Bank financed a 150 crore coal project. However, with the effects of climate change being felt across the world, the concept of “sustainable businesses” has gained pace globally, and there is no reason for banks to be left out of this conversation. But what is “responsible banking” in the first place?

The United Nations Environment Programme attempted to initiate this in 2019 by issuing the Principles for Responsible Banking. These principles ensure that banks’ strategies and practices align with the vision of the Sustainable Development Goals and the Paris Climate Agreement. Currently, 199 banks worldwide have become signatories to these principles—with Yes Bank being the only signatory from India so far.

But, aligning these principles with a bank’s core operations needs to be done, over and above the eco-friendly Corporate Social Responsibility (CSR) projects that banks implement. “While communicating with banks about responsible banking, one bank was frustrated with us for not taking into account that they had planted hundreds of trees under their CSR!” says Ekta Verma from Partners in Change, a society that promotes responsible business in India. “But the CSR projects mean nothing if the bank’s core operations are damaging the environment or causing human rights violations.”

That makes sense. For instance, SBI claims to have spent approximately ₹3.57 crore on acquiring solar power plants, solar lamps, solar water heaters, and solar street lamps pan-India in FY 2016-17. But it can’t go unnoticed that at the same time, SBI is also considering the loan to the Carmichael coal mine, which will help operate a sizeable 60 million tonnes per annum capacity coal mine.

So, it is the banks’ core operations and lending patterns that become central in the fight against climate change. One way for banks to proactively engage in this fight is to dedicate greater funds to finance renewable and clean energy projects.

Indian banks seem to be slowly catching up to the trend of financing renewable energy projects. This is not to say that new coal-fired plants are not being financed anymore. Their construction, in fact, has more than doubled between 2018 and 2019 in India. But, “the increase [of construction of coal-fired plants] has worried financial analysts as it coincides with a time when major lenders are turning away from coal financing,” found a report by the Centre for Financial Accountability and Climate Trends. The report analysed 50 project finance loans across 43 coal-fired and renewable energy plants between 2018 and 2019 across India. In this line, the report showed that project funding to coal mines by commercial banks had dropped by a massive 126% between the said years.

So where was the money being turned towards then? It went to 41 renewable energy projects in 2019; about 80% of this funding spearheaded by commercial banks went to Rajasthan, Karnataka, Andhra Pradesh, Gujarat, and Madhya Pradesh.

But, challenges for banks to divert their funds towards clean energy remain. With respect to sustainability, “There is still no market competition for banks yet, for more of them to get on board to make sustainable commitments. In our conversations with them, banks have told us that if they stop investing in certain companies [that may not be environmentally sustainable], they will face losses,” explains Ekta.

“In response, we try and reiterate that adopting sustainable principles does not need to occur overnight. They can begin with having ten-year targets to slowly phase out investments in carbon-intensive projects, and have a basic disclosure to show the carbon footprint of the companies they invest in,” she continues.

Ekta makes a significant point. Even if banks are financing sectors other than clean energy, they can be held accountable by asking a simple question: how carbon-intensive are companies that they readily finance?

The Financial Stability Board, an international body that monitors the global financial system has made recommendations to enable such financial transparency. It advised banks to disclose certain climate-centric indicators about companies they finance such as the companies’ share of greenhouse gas emissions, and the banks’ share in these companies. The Board also recommended establishing measurable ‘reduction objectives’ for their financed emissions; these should be in line with the Paris Agreement’s targets of reducing global temperatures by 2℃. This holds promise on two counts — one, that banks will become accountable for the implications of the financing decisions they make, and second, that it will push banks to screen and prioritise companies that are committed to supporting a low carbon economy.

In the past, banks have taken harsh decisions when the companies they financed did not live up to sustainability standards. In 2019, Citigroup bank canceled all its financing to Indonesian food giant Indofood, after the company failed to get sustainable palm oil certification from Roundtable on Sustainable Palm Oil (RSPO). Indofood failed to address over 20 violations of RSPO standards and 10 violations of Indonesian labour law. The company lost Citigroup’s USD $ 140 million, which was its second-largest source of funds from a western bank.

In India though, banks are still dragging their feet when it comes to implementing policy commitments to reduce their own emissions, or those of the companies that they finance. The Fair Finance Report 2019, which Ekta co-authored, shows that out of the 9 Indian banks that were assessed, only IDFC bank had demonstrated policy commitment to mitigating climate change.

“Banks often tell us that for them to make strict commitments, they need a push from regulators like the Reserve Bank of India (RBI) or the government of India,” Ekta comments. “The good news is that RBI in its latest annual report made a comment on Environment, Social and Governance (ESG) principles in the financial sectors.”

In the annual report released this August, the RBI points towards why India’s banking sector has not been able to incorporate ESG principles into its operations just yet. It cited the lack of consistent methodologies on how to incorporate ESG, and the high cost of consistent reporting and review procedures as reasons. The annual report puts the spotlight on central banks and regulators to lead the way through the “standardisation of the ESG investment terminology”, and the “design of a standard disclosures format for firms.”

Perhaps this will be the regulatory “push” that banks are hoping for. Depending upon the principles that financial institutions and corporates decide to align their policies towards, they can play an important make-or-break role in the battle against climate change. The recent developments in the Carmichael mine controversy reveal similar trends.

Last week, the French corporate giant Amundi announced that they will divest approximately $21 million of bonds they have with SBI if the bank extends the loan to the Adani Group; after all, one of Amundi’s four founding pillars is social and environmental responsibility. It doesn’t help that the Adani Group seems to have had a difficult time securing insurance.

At the very least, banks need to start discussions on banking responsibly that goes beyond CSR projects, to acknowledge that they too are a part of this climate change landscape. “See, as of now, in the Indian context, it is difficult to expect that customers of the banks demand sustainability to be a part of banks’ policies. After all, so many people do not even have a bank account at present,” says Ekta. “So, the push has to come from the regulators, and RBI seems to have taken the first step.”