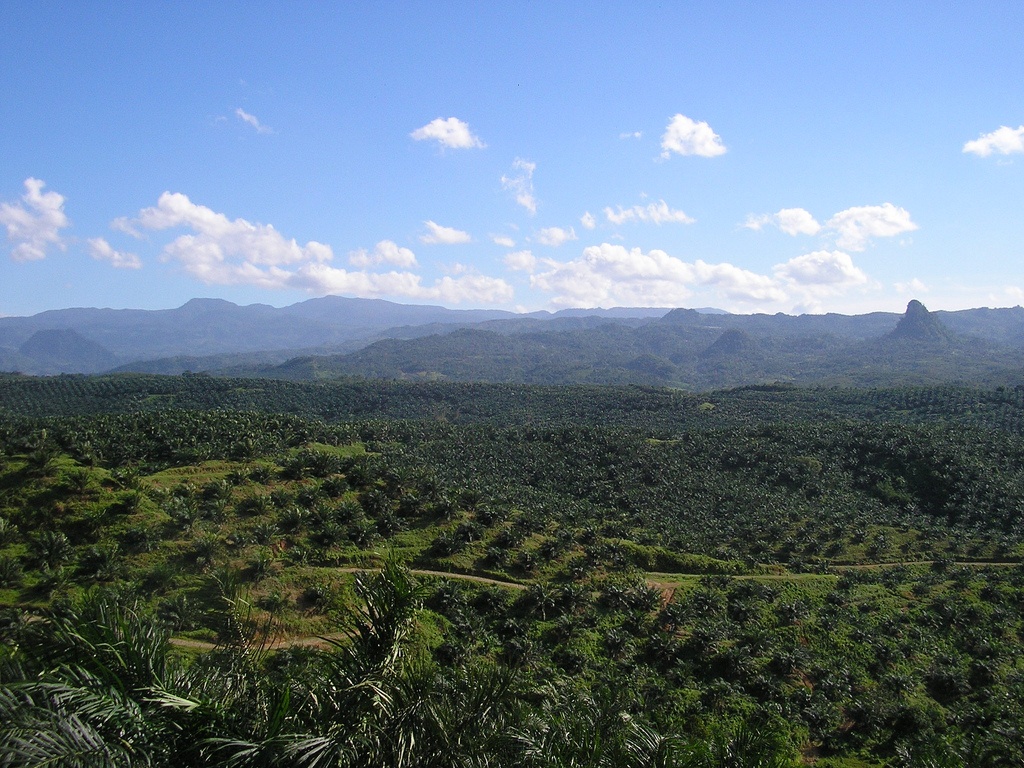 This morning, I ate toast for breakfast. Then, doing my share of household chores, I ran the washing machine. A quick shower later, I sat down with a cookie to begin writing this story. This is only about an hour of my daily schedule, but by making use of detergent, soap, shampoo, a cookie, and even bread, I had already made an acquaintance with palm oil—the most widely consumed vegetable oil on the planet.

This should not be that surprising, since this versatile oil is found in almost 50% of consumer goods globally. If you reside in India, your probability of running into it is even higher: as of 2019, India imported $ 5.4 Billion (USD) worth of palm oil, making it the highest importer of the substance in the world. In January this year, India halted imports briefly, resuming them again in May.

Where does palm oil come from? The fruit of the palm oil tree (Elaeis guineensis). Thriving in the warm tropics, this is a highly productive crop; the palm fruit develops in dense bunches that can weigh up to approximately 10 kgs. With a single oil palm tree producing lucrative fruit for up to 30 years, it is a good business proposition and as a result, is grown widely in Indonesia, Malaysia, and Latin America.

But, its production comes with huge ecological costs: between 1990 and 2010, more than a third of large-scale oil palm expansion led to direct forest losses in major producing countries such as Indonesia, Malaysia, and Papua New Guinea. This forest loss is estimated to be a whopping 3.5 million hectares, roughly equal to 6.5 million football fields.

But considering palm oil’s versatility and omnipresence in global markets and commodities, is there a possibility of still producing it, but sustainably?

The Implications of Unsustainable Palm Oil

Since 2004, a global initiative has been on to ensure that palm oil production transitions into a sustainable business. The not-for-profit Roundtable on Sustainable Palm Oil (RSPO) spearheaded this by reiterating that unsustainable palm oil was everybody’s problem—be it producers, consumer goods manufactures, banks, or consumers. Today, RSPO boasts of over 4,800 members from over 90 countries belonging to different points of the supply chain, who have all committed to comply with a set of environmental and social criteria regarding palm oil production and use. As of 2020, North America had the most number of members enrolled at 589. 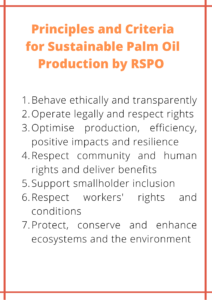 Upon complying with these rules, the producers are rewarded with a certification of ‘Certified Sustainable Palm Oil’ (CSPO). By binding companies to environmental criteria, RSPO expects to minimise the negative impacts that palm oil production has on different ecologies. For instance, it states that no primary forests or areas with significant concentrations of biodiversity, fragile ecosystems, or those which are fundamental to meeting basic or traditional cultural needs of local communities can be cleared to produce palm oil.

The implications of such environmental damage in a producer country like Indonesia could be immense. After all, the country accounts for 15% of the world’s flora, and 10% of the world’s fauna, including the critically endangered Orangutan and Sumatran Tiger. Since the fastest way to clear land to grow palm is to burn the existing forests, the smoke is an additional cause of worry. It is believed that 80% of Indonesia’s fires stem from land being cleared for palm oil plantations. That palm oil is a water-intensive crop does not help: Oil palms are estimated to use up to 80 gallons per tree, per day, which is much more than what coconut palms need, which is up to 13 gallons per tree, per day.

As far as the impact of the RSPO certification on Indonesia is concerned, a 2017 study suggests that it could have significantly reduced, although not eliminated, deforestation in Indonesian oil palm plantations by about 30% from what would have happened in its absence between 2001 and 2015.

How far have companies succeeded in sourcing sustainable palm oil though?

A Look at Companies’ Performance So Far

As of today, 19% of global palm oil is certified ‘Sustainable’ under RSPO.  But, let’s look at some more numbers. The World Wide Fund for Nature (WWF) compiles a ‘Palm Oil Buyers Scorecard’ scoring companies—some of whom are also RSPO members—out of a total possible score of 22 on the basis of how sustainably they source their palm oil. Some of their 2019 results were a little worrying. Of the 173 companies WWF reached out to, only 27% required that their suppliers of palm oil have a deforestation-free policy in operation. Only a miniscule 18 companies are tracing their palm oil from both oil mills and plantations. METRO Wholesale and Sodexo are a few amongst those who are performing poorly on the scorecard, while global giants like Ferrero and L’Oreal are amongst the toppers.

On a more encouraging note, more than a quarter of the companies are now thinking beyond just making the supply chain sustainable. They are, additionally, investing in on-ground initiatives in palm oil-producing regions by supporting smaller producers, restoring forests already damaged, and taking up conservation projects.

India too has 67 members represented in the RSPO as of September 2020, which is a significant increase from the initial 4 that registered in 2011. Of this, 51 Indian companies have also obtained RSPO supply chain certifications. But, if the performance of these companies is going to impact the ecology of the producing nations, how does this impact you, if you are sitting in a country that imports the most palm oil in the world?

A Glance At India

“India has made commitments under the Nationally Determined Contributions (NDCs) and Sustainable Development Goals. Meeting those commitments cannot be limited to activities within the boundary of India, we will have to review our ecological impact on international demand too,” says Kamal Prakash Seth, Country Head-India, RSPO. “Countries like India which are large buyers and importers of palm oil from producing countries need to demand a more sustainable product. How else will the producing countries be incentivised to take up sustainable production?”

With promoting sustainable import and trade of palm oil as one of its goals apart from promoting its sustainable consumption and sustainable supply chain, the Sustainable Palm Oil Coalition for India (I-SPOC), a business-led multi-stakeholder initiative was launched in September 2018. It currently has 21 members, including the consumer goods company Hindustan Unilever Limited. (HUL).

HUL achieved its goal of 100% sustainable sourcing of palm oil in 2019. They claim to have leveraged NGO and industry partnerships to drive market transformation and traceability of the supply chain. They refreshed their Palm Oil Policy in 2016, stressing on transparency, and no exploitation of people or communities. “That HUL can achieve these targets shows that their competitors too can do the same, as long as they have the intent to do so in their business models,” says Seth.

It is also encouraging to note that there are growing consumer trends towards sustainable sourcing in India. “According to Accenture Covid-19 Consumer Pulse Research, where 2,500 Indian consumers were surveyed among the 45,000 respondents, around 90% of Indian consumers are making changes in their consumption patterns by becoming more mindful of what they are buying and making sustainable and healthier choices,” says Bhavna Prasad, Director, Sustainable Business, WWF-India.

But there is still a lot to be done. Most Fast Moving Consumer Good (FMCG) companies and consumers are not aware of the presence of palm oil in the items they consume, or that it is used in 45% of most supermarket ingredients. “Those businesses who are aware tend to focus on the direct impact of their businesses and not necessarily on their supply chain, so creating awareness about their supply chain is challenging,” says Prasad. “This results in lower demand for sustainable palm oil from downstream buyers, who otherwise can send the right market signals to incentivise sustainable production.”

Moreover, companies are still not aware that complying with these environmental and social norms can also have economic benefits—economic benefits that can indeed be huge. Take, for instance, this 2012 WWF report that states that two firms had reported a “total yearly pesticide cost reduction of $250,000 [USD] and herbicide cost reduction of $73,859.” This benefit is because RSPO introduces a set of tools to facilitate better agricultural practices, including integrated pest management. Yet, “Even now, you still don’t see the bigger players making such commitments to source sustainable palm oil,” says Seth.

Now, India is pushing to produce palm oil. As of 2016, the country had about 3.00 lakh hectares under palm oil cultivation. A large stimulus came in the form of the National Mission on Oilseeds and Oil Palm in 2014. One of its aims was to bring 1,25,000 hectares of land under oil palm cultivation across 19 states, including seven in Northeast. More recently, this July Prime Minister Narendra Modi appealed to Northeastern farmers to adopt palm oil cultivation as a step towards the Atmanirbhar Bharat Initiative.

That production of palm oil in India will also be accompanied by ecological impacts is highlighted in a recent news report where experts indicate the threat of monoculture of oil palm, given the crop’s water-intensive nature amongst other ecological impacts. If sustainable palm oil production does not become a point of discussion now, we could see similar ecological impacts closer to home. Or worse, our demand could still end up impacting the ecological and social conditions in somebody else’s home.