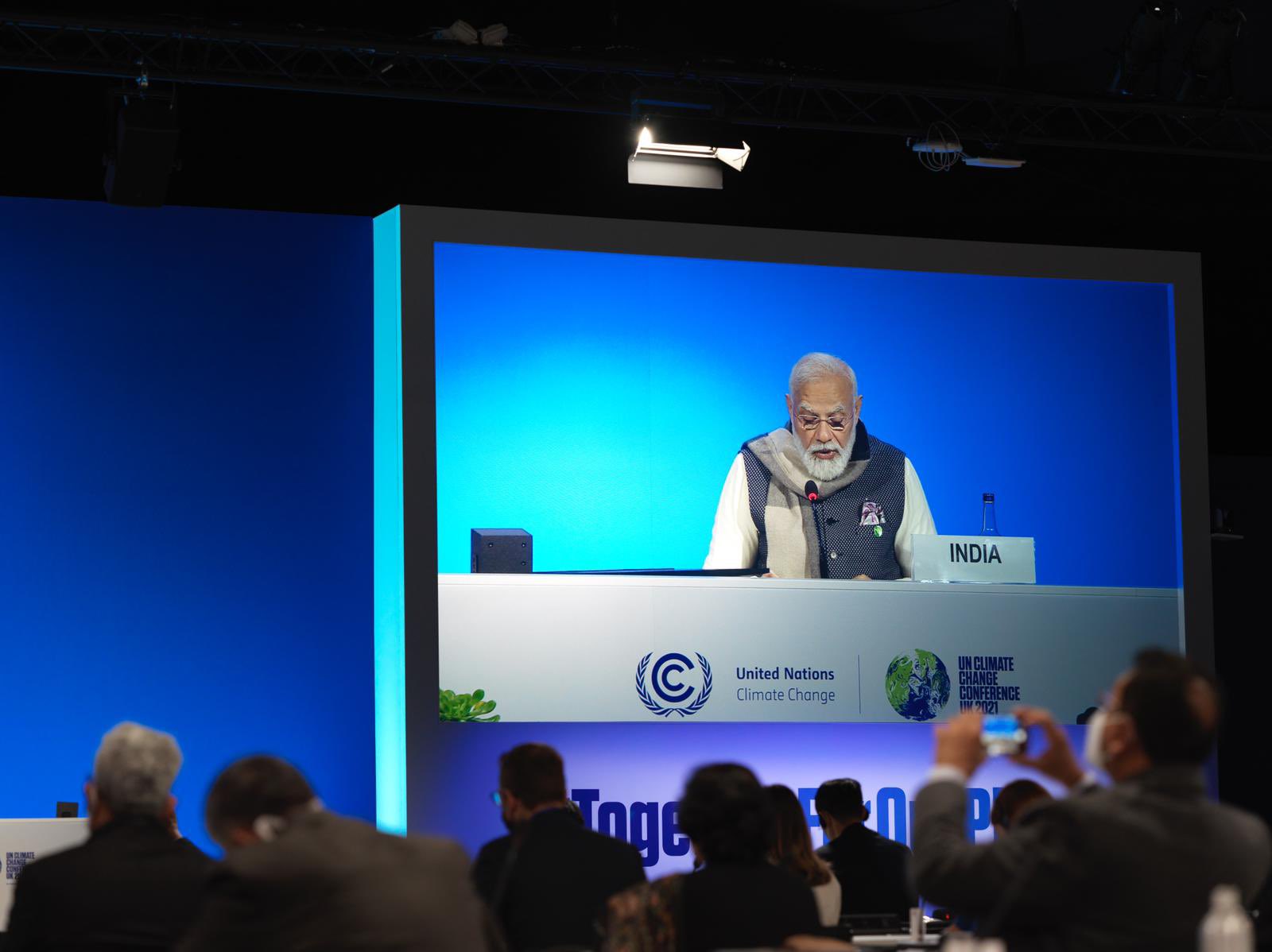 This article is produced under the aegis of Climate Tracker’s Online COP26 Climate Justice Journalism Fellowship, awarded to The Bastion’s Environment Lead Vaishnavi Rathore. To read the rest of her coverage under this fellowship, click here.

It was late night in India on November 1, when Prime Minister Narendra Modi announced that the country would reach carbon neutrality by 2070. Prime Minister Modi was addressing world leaders at COP26 in Scotland’s Glasgow, as part of the ongoing United Nations climate negotiations. Carbon neutrality, or net zero emissions, is a point in time where countries compensate for the emissions they generate by ensuring that greenhouse gases are either absorbed by or removed from their national economies.

Delivering the National Statement at the @COP26 Summit in Glasgow. https://t.co/SdKi5LBQNM

“The world’s top 10 coal power [sic] countries have now all committed to Net Zero [sic], as India announces a net zero pledge at COP26,” said Dave Jones, Global Lead at Ember in a press release circulated after India’s announcements. “But [the usage of] coal will need to end one, two or even three decades before the net zero dates that have been laid out. These net zero ambitions now need to transform into near-term action on coal. Failing to act on coal will undermine the credibility of net zero pledges.”

More than 9,000 kilometres away from Glasgow, just as India pledged its net zero commitments, a group of over fifty people from Adivasi communities raised their voices on the adverse impacts of coal in the state of Chattisgarh. The group reached Raigarh, one of Chhattisgarh’s coal capitals, after completing a 30-kilometre padyatra—or journey by foot—from nearby Tamnar to highlight the “indiscriminate air pollution” due to coal-fired thermal plants in this region of the state. Coal had ruined their air, water, and land, a participant informs me. Their padyatra began from a temple in Tamnar—in 2021 alone, this site has been used for at least 15 public hearings on the expansion of old coal mines, or the opening of new ones. The Adivasi communities who gathered at them vehemently protested against all these coal projects.

The coincidence of the two events encapsulates where India currently finds itself in its energy transition from coal to renewable energy sources. On the one hand, along with carbon neutrality, the country has set a date to achieve a cleaner future by: Modi stated that by 2030, half of India’s energy would come from renewable sources and that carbon emissions would be cut by 1 billion tons from business as usual. But, on the other hand, coal continues to remain the mainstay of India’s power sector, generating 55% of the country’s energy requirements. Yet, the future of this polluting fossil fuel in India did not receive mention in the Prime Minister’s address.

With India now jumping on the bandwagon along with 60 other nations who have made net zero pledges, the elephant in the room needs to be addressed—what would the roadmap to transitioning from coal to renewable sources of energy look like in India?

Phasing Coal Out, Slowly But Surely

Earlier this year, the International Energy Agency (IEA) estimated that ramping up the use of renewable energy is indeed possible for India along a similar timeline as Modi’s net zero pledge. In the event that India implements its stated energy policy ambitions and that its economy recovers from the pandemic at an “optimistic speed”, estimates show that by 2030, renewables can make up about 60% of India’s total generation capacity and provide 450 GW of non-hydro renewable capacity. By then, through this combination of policy outcomes, solar energy alone would be responsible for meeting 75% of India’s renewables target, and its power generation could overtake coal.

But, as the IEA highlights, there is a key limitation in this scenario—the total emissions of the power sector may remain unchanged, affecting India’s promises of a greener future. This is primarily due to the fact that coal-fired plants still play a relatively prominent role in power generation in India. So, the rapid growth in renewables like solar energy only helps avoid the generation of any new emissions due to a rising electricity demand—but, it does not displace existing coal-fired capacity.

“If we look at the immediate goals, which are the 2030 targets, we can still get away with not talking about coal just yet,” Sandeep Pai tells The Bastion. Pai is a Senior Research lead at the US-based Center for Strategic and International Studies. “Until then, renewable energy can grow, but coal will still be needed as we transition. As we move closer to the net zero target, that’s when coal will have to be discussed seriously, because its use will peak and then eventually decline. For that, what I hope to see is a clear pathway for India on how to reach this state of carbon neutrality—what will the shift mean for each of the sectors that depend on coal? What sort of policy environment will be created? While setting a target is ambitious, it will be meaningless without a detailed trajectory explaining how to achieve it.”

Phasing out coal demands that renewable sources of energy should be able to compete with it in the energy market. Yet, while India’s renewable sector is receiving an encouraging push from both the government and private sector, these methods of power generation are still not cheaper than coal. “For India, it will be risky at this stage to announce any coal phase outs immediately,” Pai adds.

As India slowly sets a path to achieve its energy transitions, local communities have questions. “In Raigarh alone, at least 10,000 trips are made each day by trucks from coal mines to other places. This transportation industry employs a considerable amount of people from the district and elsewhere, apart from those who work as labour [in the mines]. In this shift from coal [to renewable energy], what happens to their jobs?” Rajesh Tripathi, a farmer and a member of the Chhattisgarh-based Jan Chetna Collective, asks The Bastion. Tripathi also participated in the padyatra, and works on people’s rights to food and health as well as the protection of the environment in the context of coal.

As India Transitions, What About Those employed in the Coal Sector?

Just like the case of Tripathi’s acquaintances, a 2021 study by Pai estimates that 3.6 million people in India are directly or indirectly employed in the coal mining and power sectors. Coal’s omnipresence is so vast that close to 40% of India’s districts are dependent on coal in some capacity—people are employed as coal workers or receive pensions from the sector, and settlements and other services are developed using funds from the District Mineral Foundation or from coal mining companies’ CSR programs. Even the Indian Railways generates revenue through coal. In FY 2017-18, 60% of the total coal consumed for grid electricity generation was transported through the railways. In FY 2018-19, the Indian Railways ferried 603 million tonnes of coal.

“Coal not only provides job opportunities to people, it is also an entire ecosystem. Various regions are differently dependent on it,” says Pai. He led the development of the October 2021 report Understanding Just Transitions for Coal Dependent Communities that puts numbers to his claim. The report found that in Jharkhand, coal-producing district governments cumulatively collected nearly ₹800 crore ($110 million USD) under the District Mineral Foundation funds in 2020, and spent almost ₹116 crore of CSR funds. “Just transitions [from coal to renewable sources] will take decades. What needs to be done now is to start making a plan for the workers’ shift now, so that we can succeed later,” Pai says.

Such a plan needs to be prioritised. “People in coal-mine dominated areas have already suffered the loss of their lands and forests to coal mining, so as the transition happens, it will have to be in a just manner,” Dr. Jo Woodman, a UK-based Senior Campaigner with Survival International, tells The Bastion. “After losing their forest-based livelihoods, these dangerous and insecure jobs in coal fields are all they have—their forests have been destroyed. Most urgently, no new greenfield mines [those subject to minimal coal exploration in the past] should be permitted in India. These destroy the forests, and with that, they also destroy the lives of the Adivasi communities to whom those forests are home, are vital, and are sacred.”

For Chhattisgarh and other states, these forests are indeed a source of livelihood—the forest offers produce like mahua flowers to brew into alcohol, amla or gooseberries, mulberry trees that breed silkworms for silk production, and medicinal plants. When Tripathi and his team conducted a study of the region, they found that families here collect 32 varieties of vegetables from the forests and 52 types of other minor forest produce. In another study, they found that in Raigarh, where forests had been destroyed due to mining, cases of malnourished children and pregnant mothers had increased.

“Even today, the families that might be dependent on coal still access the forest for its many resources. That dependency hardly ever ends, but it suffers where forests suffer,” Tripathi says.

“While transitioning away from coal, the government should also prioritise developing the agriculture sector, irrigation facilities, and subsidies for the many farming tools and machines—these steps will generate jobs for people. For those who do not have land, aquaculture, poultry farming, and animal husbandry are alternatives that people are happy to shift to,” Tripathi adds.

Another resource that is key in making just transitions possible is, unsurprisingly, money.

On 3 November, the third day of COP26 negotiations, over $130 trillion USD of private capital was committed to transforming the global economy into net zero emissions, through the Glasgow Financial Alliance for Net Zero (GFANZ). These commitments, pledged by over 450 firms across 45 countries, could deliver the estimated $100 trillion USD of climate finance needed to achieve net zero emissions over the next three decades. In a press release, Mark Carney, the United Nations’ Special Envoy for Climate Action and Finance and the COP26 Private Finance Advisor to the United Kingdom’s Prime Minister Boris Johnson said, “to seize this opportunity [of transitioning to net zero], companies must deliver robust transition plans and governments [must] set predictable and credible policies. This will give finance the confidence to invest, pulling forward climate actions and smoothing the transition to net zero, driving growth and jobs upwards, and forcing emissions downwards.”

What is equally important, is to ensure that these funds reach developing countries. “It is absolutely beholden upon the developed nations of the world to financially support just transitions in developing nations and commitments on these lines must be made at COP26,” Woodman says.

Apart from international finance flowing in, Woodman also highlights a commitment that India needs to make at the domestic level, to ensure a just transition. “India has to abide by the constitutional rights and national laws and regulations like Panchayat (Extension to Scheduled Areas) Act, 1996 and the Forest Rights Act that ensure that no mining occurs on Adivasi communities’ lands and forests without their true consent.” Yet, just weeks ago, the Ministry of Environment, Forests, and Climate Change approved the final stage forest clearance for the Parsa mine in Chhattisgarh’s Hasdeo Arand region. This was met with widespread protests; Adivasis declared that the Gram Sabha consent obtained was forged since they never approved it.

After the ambitious net zero targets set at COP26, the country now awaits a roadmap to define how these will be reached. In the meanwhile, the focus should shift towards the adverse impacts of coal mining on the communities that live close to mines, and those employed in the sector, whether directly or indirectly.