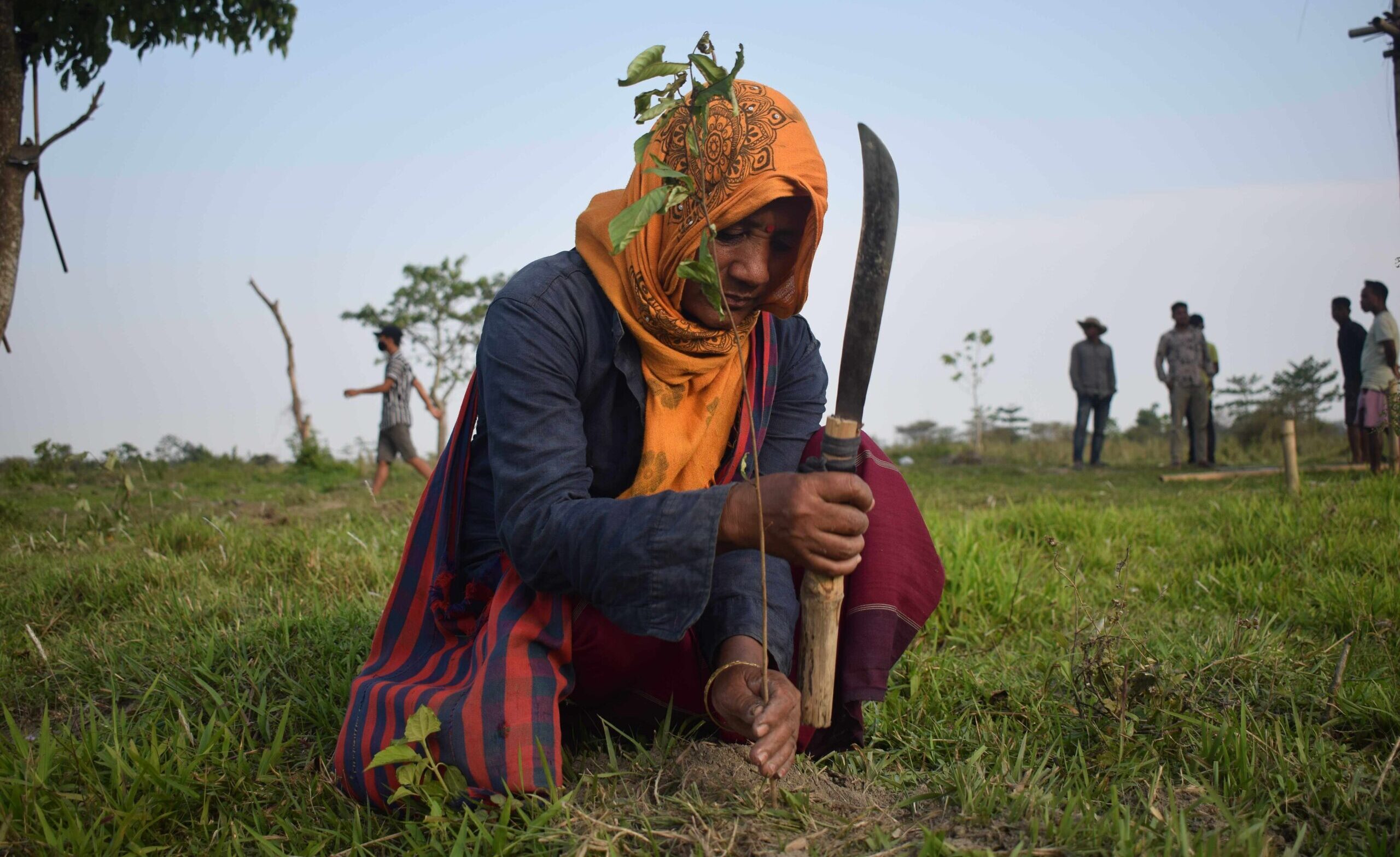 In the North East Region of India, forests have long been a site of struggle between people seeking to profit off its rich biodiversity and reserves of natural resources. Between the ‘80s and early ‘00s, rapid natural resource extraction, and armed struggles stripped whole forests, with illegal timber logging fuelling the latter. Today, despite relatively greater stability in the region, forests in the northeastern states of India have continued to disappear towards the commercial expansion of plantations and agricultural land. A 2019 Forest Survey of India report revealed that the region is a hotspot for forest loss, with recent satellite imagery showing that the “seven sisters” accounted for 76.7% of India’s lost tree cover over the past two decades.

“There is no work here,” says Maloti Baidu, in Panbari village. “But will you find a place as beautiful as this?” she asks earnestly. For all its beauty, limited investment in public infrastructure, especially towards education and healthcare, has made rural communities’ access to basic services expensive even today. Instead, investment in infrastructure is channelled towards controversial big infrastructure projects like the Teesta Dam in Sikkim, or Etalin in Arunachal Pradesh.

Ironically, these projects are positioned as opportunities to “expand the region’s clean and renewable energy capacity”, all the while further degrading natural landscapes. “The dynamite they are using to blow up the forests causes landslides every season. The soil becomes loose. We aren’t against development, but these projects [that get] funded by development agencies and are implemented with goals towards gaining carbon credits — but what do we get from it?” comments a member of the Lepcha community in Sikkim, on the dichotomy of such a developmental approach.

“In the absence of job opportunities, what are people supposed to do?” asks a young man living in Baligaon Miri Green village in Assam’s Sonitpur district. “They work as daily wage labourers in the sand mines and illegal timber trade, despite knowing that they will get paid very little.” Such experiences summarize the reality for many of the northeast states’ rural communities. 70% of the region is dependent on farming and allied activities for livelihoods, a significant proportion of which are smallholder farmers. Average incomes in rural Assam amount to around ₹13,000 per month for households with two working members.

Chemical intensive agriculture and poorly implemented government support schemes further compound the problem. “A lot of people still engage in farming but they have to use a lot of chemicals. People fall sick because of this,” explains Pabitra Mili, a youth leader in Baligaon. “The government provides people from lower-income families with rice, which is a very good thing… but it creates problems for locals in the long run. The easy availability of cheaper rice in the market means that farming and all the labour, time, and money invested in it becomes worthless for most people in the younger generation, which is why they migrate to south India and work [in menial jobs] like security guards.”

This vicious downward spiral of poverty and forest loss across the region is now compounding other challenges, from climate vulnerability to accelerating human-wildlife conflict.

Locals want to coexist peacefully with the natural world. “We have always lived here, there is no other place we know,” says a villager in Panbari, adjacent to Kaziranga National Park in Assam. “The ideal situation would be that the elephants and other animals get enough to eat and there should still be something left for us to make a little money to sustain ourselves”.

This culture of coexistence alongside nature has informed the approach of an NGO called Balipara Foundation, which is working towards creating sustainable livelihoods that are linked to habitat restoration in the northeast.

Payment for Ecosystems Services (PES) programmes like reducing emissions from deforestation and forest degradation (REDD) pay communities to not use or harvest from forests, in exchange for carbon credits. The Foundation’s “Rural Futures” programme, launched in 2016, extends this principle to a ‘payment for restoration system’: pay communities to restore natural forests, then help them augment these nature-regenerating incomes through sustainable businesses in agroforestry, mushroom cultivation, homestays and nurseries.

“Earlier the poor villagers of our village didn’t have any opportunity for earning their basic livelihood,” says Billingston Marak, a forester working with the Balipara Foundation at the village of Tarabari. “With the plantation [forest restoration] work, they are able to generate their own income.” During the COVID-19 lockdowns of 2020 and 2021, agroforestry and forest restoration provided employment for migrants returning from around the country. For those involved, impact monitoring data collected by the Balipara Foundation shows an approximate 40% increase in income within the first year. With the income earned from regeneration, communities can better afford healthcare or education and in time, allows them to invest back in building up community assets. With incomes linked directly to the restoration and preservation of nature, the perverse economic incentives that drive habitat destruction are weakened, if not eliminated.

For women, less time-intensive activities like mushroom cultivation have given them greater economic independence, without adding a major burden to their household activities.

The key to this model’s success has been the involvement of the community as stakeholders and co-managers, not simply as labour. Many afforestation programmes tend to fall prey to this approach with forest-fringe communities: trees restored are non-native, not diverse, and are sourced from stock nurseries instead of source forests or with the help of communities’ traditional ecological knowledge. The Rural Futures model is an effort to involve the community as stakeholders and co-managers, bringing their knowledge and experience to the table as equal creators in the forest restoration process.

Involving community institutions and leaders in restoring the forest as well as the businesses created by the process means that locals have direct interests in ensuring the longevity of their forests. Many community members, especially among older and influential members, possess rich ecological knowledge on the history of nearby forests, which is vital information when you are establishing a benchmark for what a fully restored forest might look like. This is a mutual exchange that has a greater chance of success: the Balipara Foundation brings technical skills needed for scientifically managing the forests, and communities share their knowledge towards designing successful interventions.

Research from around the world shows that the biggest predictor of biodiversity loss is socioeconomic inequality: even in countries with robust institutions for protecting biodiversity, high levels of inequality have led to rampant biodiversity loss. Evidence from Indonesia has shown that greater access to clinics significantly reduced deforestation on the fringes of rainforests.

So, at the core of the Rural Futures model lies the question: why can’t we think of people and forests together? Rather than a zero-sum game of ‘forests versus development’, the model aimed to change the way people saw the earning potential of forests – from commodification through destruction, to natural capital through regeneration.

Heterodox economists and environmentalists are increasingly vocal about the failings and limitations of the GDP model, including the SDG measures, in integrating social and ecological measures. The COVID-19 crisis and a mounting body of scientific research on economy-linked planetary crises must lead policymakers to question what it means to live well today. This concept of a ‘wellbeing economy’ that harnesses the economy to deliver both social and ecological wellbeing, beyond just profit, is slowly gaining traction in regions like Europe and New Zealand.

Multidimensional wellbeing is particularly important for a region like the North East. Besides having their cultural traditions and practices derived from nature, almost 80% of its people are employed in industries dependent on natural resources; bulging industrialization has fractured this community-nature linkage. Recent developmental priorities of the government have been disconnected from the realities of local people, but they can also be disconnected from local aspirations as well.  “Till now we haven’t considered needing a mall or anything,” says one of the villagers at Tarabari. “What we want is some income and land, so we can plant more food, and tend to pigs and goats.”

In a series of in-depth interviews conducted in early 2021, people across Rural Futures programme sites were asked what “being able to live well” meant to them. Most expressed the desire for a stable income that allowed them to access basic needs for their households and children. Many said they would rather have decently paying and secure jobs in their villages rather than city jobs without security. “Most [who go to cities] come back after a year or so, but there are no opportunities here,” says Senai Mili, who runs a homestay in Baligaon village. “Although their income may be less [when they come back], so are the expenses.” Forests form an integral part of northeast communities’ cultural landscapes too, be it through sacred groves and landscapes, or through traditional forms of sustainable harvesting and management practices of forest lands.

The transmission of traditional knowledge is part of this cultural-ecological landscape, linking older and younger generations together. Assimilationist cultural and economic pressures, however, are weakening these ties. “Younger generations now have to stay outside [our villages] in hostels, and they are compelled to only study from books,” says Komison Mili, one of the community leaders at Baligaon. “In our time, we could study at school, do volunteer work, play sports and still work in the field and know about our plants. They have an interest, but nowadays they lack the time.”

Losing this knowledge not only fractures cultural wellbeing, but it also has socioeconomic effects. Traditional seeds are being replaced by high-yield varieties, and this gene loss, according to the FAO’s 2019 biodiversity report, is a huge risk for global food security. As Mahan Chandra Borah, founder of the Annapurna Seed Library, a nonprofit dedicated to collecting, categorizing and preserving heirloom seed strains in Assam, explains, “every seed has its own good properties, as well as a cultural value, which can help us a lot in the future. If we talk about food security for the future, our traditional seeds have great potential; they can also survive changes in the environment.”

You May Also Like: What if We Could Pay Farmers to Grow and Protect Forests?

Indigenous communities like the Lepcha have long been struggling against ecological degradation in their landscapes, which is now a lynchpin in the global fight against the climate and biodiversity crises. Conservationists and sustainable development practitioners are slowly recognizing these communities as partners in the struggle for the planet’s future. Still, broader development discussions lag behind, especially on the global stage where “building back better” is the latest buzzword on the block. The UN’s recent food conference illustrates this divide: while agribusinesses used the platform to talk about ‘sustainability’, indigenous-community-led organizations which focused on agroecology such as La Via Campesina were sidelined.

The IPCC’s sixth assessment report’s warnings on the need for ‘transformative change’ has lent an impetus to calls to rethink our development and economic models. It also means challenging how we think about wellbeing, even taking flexible approaches to wellbeing that recognize rural and indigenous perspectives. Only a holistic, multifaceted approach that works collaboratively with rural and indigenous communities can deliver the systems change needed to combat the climate crisis.