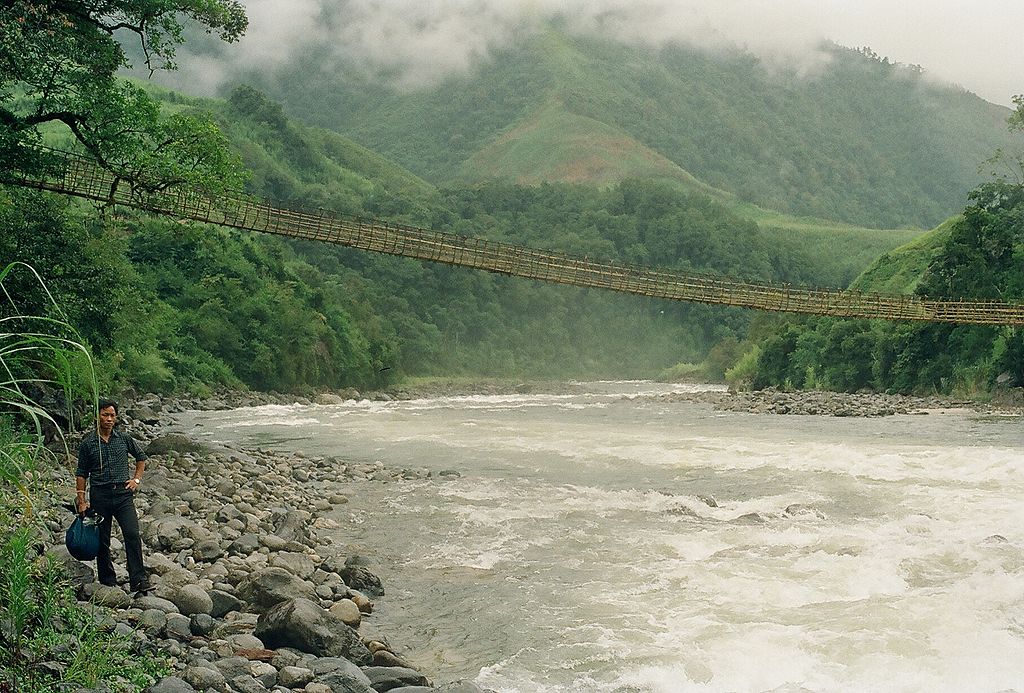 The latest addition to India’s list of hydropower projects is the controversial 3,097 MW Etalin Hydroelectric Project (HEP) in Arunachal Pradesh’s Dibang basin. Even though experts continue to ring the alarm bells on the detrimental ways in which humans have been modifying natural landscapes leading to a rise of zoonosis, the hydropower sector in India still continues to remain oblivious to these warnings.

For example, in the Forest Advisory Committee (FAC) meeting on the 23rd of April this year, the Committee neither recommended nor rejected the Dibang project on the grounds of environmental destruction. Instead, it questioned its economic viability and high tariff of power!

But before HEPs set foot on the ground, it is important to ask the fundamental question the FAC isn’t: how does hydropower development in this region alter the flow regime of the Dibang river in the long term?

At present, the lower stretch of the Dibang is characterised by a 45 km stretch of braided channels, that are a result of the river emerging from the mountains and starting the process of deposition of sediments to form fluvial landforms. These channels enable the development of a fertile floodplain that supports rich biodiversity, and the cultivation of paddy, maize, and mustard. Should the Dibang HEPs make their way in the basin, they will impact this natural flow regime of the river—the cumulative impact in the long term could turn out to be detrimental to the productive human and natural processes that exist downstream.

Presently, there is a government provision of allowing a defined quantity of water (known as an environmental flow or e-flow) to remain in the river, so that aquatic ecosystems stay healthy and continue to provide benefits to local communities. In India, the current e-flow necessary to be maintained is 20% of the average discharge available in the river for at least 90% of the time during the four lean season months. However, even a predetermined e-flow—indicating the quantity,  quality, and timing of water flows needed to sustain freshwater ecosystems—cannot mitigate the long-term consequences of the proposed HEPs in Dibang.

To understand how hindering the Dibang’s flow impacts the ecology and livelihood of people living in the floodplains, it is important to peek into the unique geography of the region.

The Dibang river is a major tributary of the Brahmaputra. Its name is derived from the confluence of the Dri and Talo (Tangon) rivers at Etalin. The Dri originates from the glaciers of the Greater Himalaya, located at an altitude of 5,355m to 5,375m above sea level, while the Talo originates in the high hills near the Kaya pass (at 4,755m) in eastern Arunachal. 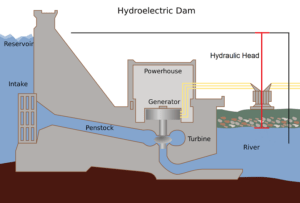 There are two geographical conditions that make the Dibang valley a good ‘hydro site’. First, is the availability of a hydraulic head in the valley, which refers to the vertical distance between the intake in the reservoir and the turbine. The distance in height between the two ensures that water falls on the turbine, making the rotation of the turbine–and the generation of electricity–possible. The hydraulic head is readily available since the streams cut through deep valleys and maintain a high gradient of descent.

The second favourable condition in the valley is the availability of a minimum amount of water throughout the year. This too exists here, as seen in the case of the Etalin HEP, which will utilise a large fraction of glacier and snowmelt during the lean period, since rainfall progressively declines as one moves to the higher reaches of the catchments of the Dri and Talo (Ref. Fig. 1, Fig. 2).

Such is the hydropower potential of this valley due to its geophysical conditions, that a total of 18 HEPs have been commissioned in all the major tributaries and sub-tributaries of the Dibang river. In terms of identified projects, the Etalin HEP (3,097 MW) and the Dibang Multipurpose (2880 MW; DMP) are the largest, with the DMP as the lowermost water storage project on the main Dibang river.

Biodiversity Supported by the Landscape

As mentioned before, the combined flow of the Dibang, through the process of deposition, forms braided channels with bars in between them. Bedload—which are particles mostly in the river bed that can be swept along with the flow—is an important factor at play here. Only when a river’s flow is uninterrupted can it sweep the bank’s erosion along the way, and then deposit it to create these braided channels.

This blend of water and sediment dynamics creates an extremely fertile and productive floodplain ecosystem. Agricultural fields and large patches of riparian vegetation dot this landscape (Ref. Fig 3), which is also home to the famed eastern hoolock gibbon (Hoolock leuconedys) among other species of animals.

The forests and fields particularly benefit from the ecosystem services generated by the connected riparian system (laterally, longitudinally, vertically, and temporally). The growth of riparian vegetation is controlled by the dynamic interaction of flooding and sedimentation, which in turn nourishes the stream when the floodwaters recede.

Also contiguous to this landscape is the Mehao Wildlife Sanctuary located in the Lower Dibang Valley district. Based on Google Earth measurements, the sanctuary’s north-western spread is as close as 5 kilometres from the Dibang channel’s boundary. Moreover, based on the soil map of the basin, it can be concluded that the contiguity is not just limited to the vegetation cover, but also includes a contiguous substratum of soil particles and shallow aquifers. This constitutes the piedmont zone (the area at the foot of a mountain, formed by debris deposited by shifting streams) of the region, comprising newer and older alluvium. The hyporheic connectivity (which comprises water-filled spaces between the grains of unconsolidated sediments beneath and lateral to streams) is quite apparent, along with the presence of shallow aquifers in this part of the district.

The Mehao Sanctuary also owes its rich biodiversity to the Dibang’s flow regime. Take the Sanctuary’s Temperate Wet Evergreen and the Subtropical Broad-leaved forests, agricultural fields, and bamboo groves: they all grow in the Sanctuary along the left bank of Dibang. Much of this vegetation prefers moist environments. This, then, makes them sensitive to any change in the flow regime of the river.

If the Etalin HEP and Dibang Multipurpose Project establish operations here, their vast alterations to the Dibang’s flow regime would irreparably impact these ecological factors, as they both would regulate the flow regime by a great magnitude.

Impacts of an Altered Flow

Regulating the flow regime would impact two things: flow moderation over an annual cycle and extreme flow variability over a daily cycle.

During the lean period, when there is not enough rainfall, the glacier and snowmelt feeding the rivers will not be sufficient to run the plant in its installed capacity throughout the day. The water will have to be stored in the reservoir, and only the environmental flow will be released as per the government directive. With such an operational procedure in place during the lean period,  the Dibang and its tributaries will have very little water for a few hours in the day, representing the minimum flow conditions of the year.

But, for the rest of the day, as the HEPs would operate in full capacity to meet the rising electricity demand, the HEP would artificially increase the flow of the river to represent the extremely high flow.

In other words, on a single day of the HEP’s operations, the flow will see a situation of extremes. However, similarly, flood peaks and low flow periods will get reduced since DMP’s primary purpose includes reducing floods. This will create a more uniform hydrograph with reduced extremes in contrast to the present annual hydrograph over an annual cycle.

There will also be downstream effects as a result of the projects. Altered hydrology would reduce the inundation (lateral connectivity) and groundwater recharge (vertical connectivity) in the riparian zones, thereby shrinking the area of the active floodplain. Reservoirs of HEPs also trap sediments and upon release, the water would tend to erode the channels more since the channel will no longer be as sediment-laden as before. This in turn would not allow the natural meandering of the river, halting the rich exchange of water and nutrients with its floodplain. Without this exchange of nutrients, the riparian vegetation is bound to get affected. As a ripple effect, the riparian species who are supported by this vegetation mix will also be impacted. Moreover, reduced soil moisture owing to an altered flow regime can alter the composition of riparian species–an alteration that would directly impact the communities dependent on them.

Need for a broader, long-term vision

While calculating the e-flow requirements for the Etalin HEP, the Central Inland Fisheries Research Institute (CIFRI) has adopted an extremely narrow approach that only considers the ‘aquatic habitat in terms of fish and fish food organisms’ without considering the linkage between the channels and the riparian zones. Moreover, even with such a narrow focus, there is only the mention of a single species–the snow trout in the section on ‘fish diversity’. Without consideration for the vertical and lateral connectivity of the riverine system, the e-flow provision put in place seems to have been reduced to a minimum flow regime. This would fail to mimic seasonal and natural river flow regimes and with it, fail to sustain the unique ecology and ecosystems in the long run.

The consequences of an altered flow regime will only play out in the long run and are therefore easily mistaken to be non-existent in the short run. The ecological functioning of the riparian zones, constituting agricultural fields and forests, is dependent on the spatial and temporal biophysical connectivity with the riverine and upland systems (as shown in this diagram), which essentially calls for an Integrated Water Systems Governance. An urgent reassessment of the projects based on their cumulative downstream impact through an altered flow regime is the need of the hour. This should also incorporate the expected changes in the mountains due to global warming and climate change. It cannot be stressed enough that the present provisions of environmental flow would fail to even remotely mimic the flow regimes for the sustenance of the riparian ecosystems.