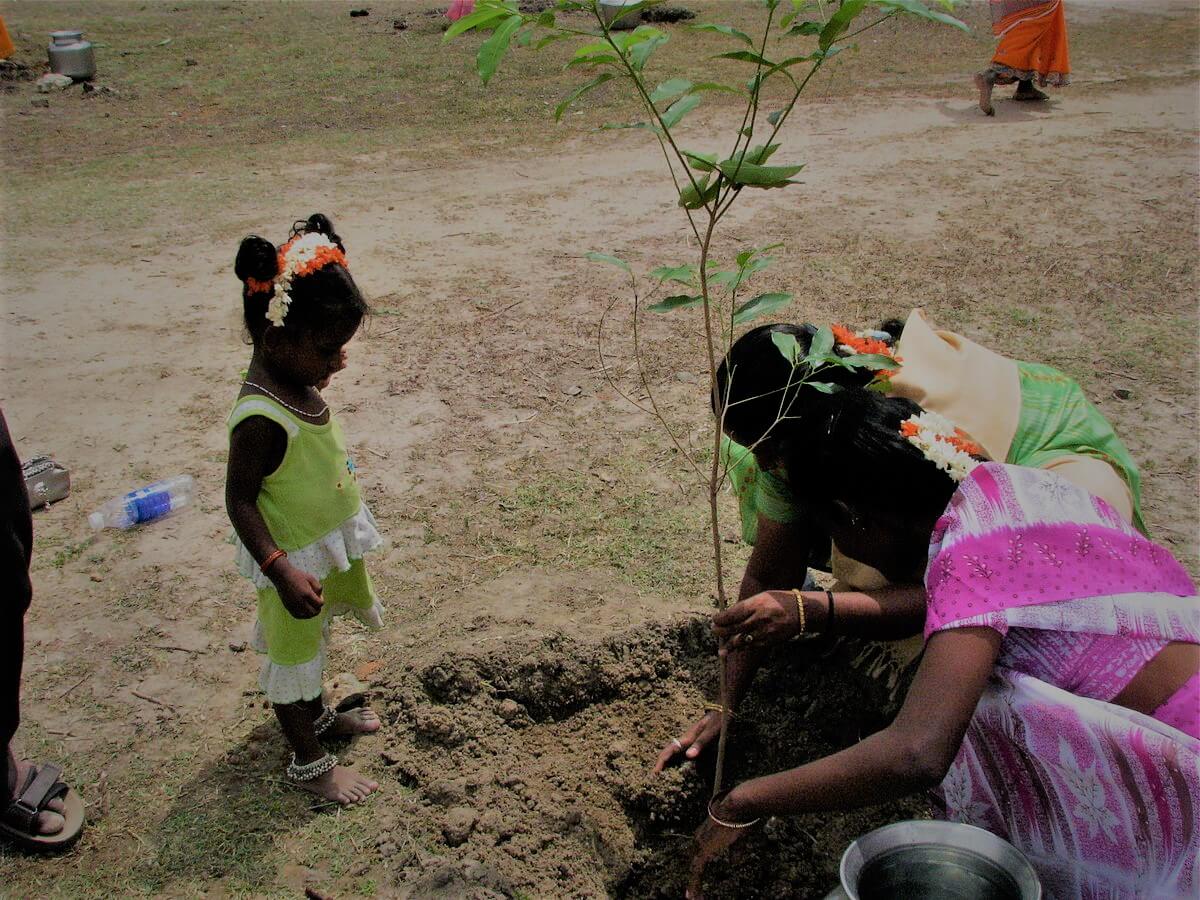 This is part two of Out of the Woods, a two-part series that explores the implication of treating Mother Nature as a legal entity. Part one of the series can be read here.

In India, stories of environmental justice observe two kinds of approaches. One, the  grassroots-driven and community-led movements such as the ‘Chipko Movement’ ‘Narmada Bachao Andolan,’ or in more recent times, the ‘Save Aarey,’ ‘Mumbai’s Coastal Road,’ Hasdeo Forest,’ and  ‘Save Mollem movement’. These movements stem from common principles of mega public-infrastructure projects overruling or disqualifying community consultation or knowledge, top-down policy decisions, policy biases, improper surveys, and heavy industry-centric-political-will.

The other approach involves often rare and autonomous actions initiated by the judiciary or the executive. More relevant instances of such actions are the judgements by Justice Srimathy in the Madras High Court declaring ‘Mother Nature’ as a legal entity, or the Uttarakhand High Court’s introduction of climate-action plans by state governments, parliaments.

The difference between the two is the faster transition and permeability of the second approach to policy implementation, welfare and budget allocations, rather than the first approach, which  involves the government’s (and judiciary) rigidity and stubbornness towards hearing community demands. The observations highlight one core lesson—environmental justice largely depends on political will and the judiciary to take cognisance of preserving and maintaining nature.

Analysing the Judgement by Justice Srimathy, the pressing question that arises is about the transition of  judgement into public policy—how does the judgement translate into its existing policy gaps through citizen and community movements, and its relevance to environmental justice and climate action in India.

Part one of this series specifically explored the validity of exemptions and permissible activities in environmental laws such as the Environment Protection Act (1986), the Wildlife Protection Act (1972), Coastal Regulation Zone Notifications (1991, 2011, and 2019). In part two, the focus is on understanding the status of a ‘living being’ through the ‘parens patriae’, the narrative of Justice Srimathy’s judgement, which grants nature its sovereignty. This enabled the principles of natural justice for ensuring its own survival beyond the rigid definitions of a non-living, semi-legal entity like wildlife), a resource in-waiting to be exploited.

But what does nature as a living entity specify in terms of tangible definitions?

The critics of ‘parens patriae‘, especially towards wildlife and natural resources, often argue that invoking judicial activism for defining broad subjects like environmental protection often risks the safety-net that policy protection for specific actors—wildlife, water, air, and minerals—brings in terms of implementation. However, these concepts and their relevance had governance credibility during a time when technology was not accessible with limited digital literacy and slow progress, with even slower funding interests in climate science, on the catastrophes of accumulating carbon since the industrial age.

Some common development activities that we now see across the country stand on a shaky premise with Justice Srimathy’s judgement, and the creative legal and policy applications of it. These activities, which are given a go-ahead after the Environment Impact Assessments (EIAs), include  mega projects such as roads, railways, statues, cutting down a couple of thousand trees, razing down a protected area, or forcing land development on a dynamic, disaster-prone coastal zone. All this, while done in ‘public interest’ so to speak, is in fact done in the interest of a few who gain from nature and ecology. Now, with nature having its own rights and duties, how do we assess whose priorities and best interests are to be prioritised over another?

A head start exists in a paragraph that Justice Srimathy emotively argues in her judgement.

“….strangely the destruction is carried on by few humans. Any such act ought to be checked at all levels. A report states, in India protected areas (like National Parks and Sanctuaries) notified under the Wild Life Protection Act 1972 occupy less than 5% of India’s geographical area. In fact this 5% provide ecosystem services to human survival. Rest of 95% of India’s geographical area is available for humans. In spite of the same it is unknown why the human is so desperate to intrude in the said 5% area. The indiscriminate activities in the said 5% area are causing huge damage, which is irreversible.”

Expanding Indigenous Rights as a Facilitator

As per the Ministry of Tribal Affairs (GOI), the objectives of the Forests Rights Act (FRA) of 2006 are to, firstly, undo historical injustice towards forest dwelling communities. Secondly,  To ensure land tenure, livelihood and food security to forest dwelling scheduled tribes and other traditional forest dwellers. And finally,. to strengthen the conservation regime of the forests by including the responsibilities and authority upon Forest Rights holders for sustainable use, conservation of biodiversity and maintenance of ecological balance.

The FRA demonstrates a wavering degree of impact it has achieved in ensuring indigenous communities such as the  tribal hamlets, unorganised forest dwelling groups, and forest-dependent communities, are protected. However, on the other hand, the industry-moulded flexibility of FRA has allowed for  eviction of tribals and destruction of forests occupied by such communities with haphazard and often disastrous methods to rehabilitate such indigenous communities. The current Hasdeo Forest Movement in Chhattisgarh is a prime example of this very flexi-service that FRA allows through varying political will and industry needs.

Also Read: A Conservation of Convenience: The Politics of Exclusionary Conservation Models in Rajaji National Park

Justice Srimathy’s judgement provides a new opportunity for FRA to restructure its definitions on protecting indigenous communities and protected and unprotected forest zones (including coastal zones).

For one, translating a legal doctrine of parens patriae into practical reality by offering state-custodian powers to forest-dwelling tribes and indigenous communities. This will provide a practical solution to ensure the rights of nature as a ‘living being’ are protected by communities directly dependent on them for food security, cultural significance and livelihoods. Through the feminist lens, these duties could also extend to the unorganised and undocumented groups using forest produce, including coastal zones, for their livelihoods. The unorganised sector of indigenous forest-dwelling women selling forest produce outside protected areas, on the outskirts of most village or city markets in India, provides an existing pool of skilled custodians that could enable the practical implementation of ‘parens patriae’ granted through Justice Srimathy’s judgement to reality. Finally, in terms of ‘duties’ of nature as a ’legal being,’ the contributions can be facilitated with scientific data on ecosystem services of nature in terms of carbon offsets, habitat sustainability and health, livelihoods and nature-based solutions for disaster management.

The judgement also provides a spectrum of policy and legal applications towards climate action demands and ecological justice matters. This judgement will most likely see its citations in environmental cases including matters challenging faulty Environment Impact Assessments (EIAs) and Environmental Clearances (ECs). But this is not enough. The judgement also merits interest from  India’s senior and well experienced  legal and development sector community to expand and explore creative legal applications of the judgement and principles guiding them.

Such applications will witness a flexible nexus for policy and science to collaborate on climate action. The scope of nature as a ‘legal being’ with fundamental rights and duties will enable innovation that is designed for accounting the rights and duties of a ‘legal entity’ to ensure its best interests. Innovations for ecosystem restoration, community-climate-adaptation and interventions for climate-led disaster management are already demonstrated and piloted.

One of the other aspects of the judgement is the perspective to re-brand climate action and activists, especially youth climate activists as enablers and solutionists from the present narrative of dissenting actions and people in India.

Why Nothing May Change At All for ‘Mother Nature’

Justice Srimathy’s judgement, in all its scope and capacity for setting a public policy narrative in climate action and environmental justice, may ultimately reach to no conclusion as the final call rests on political will. The judgement which was pronounced in April 2022 began and ended with media articles, with no political will, on any side to look at its applications. The nexus between power and capital from industry alone leaves little room even if low political will exists, and even such efforts fall on deaf ears of the legislation, the executive and often the judiciary too.

In India and the Global South, a vast proportion of the populations are unaware of climate change and its impacts. They have no access or facilitator to help make sense of climate science and climate projections. The demand for better climate action and adaptability through welfare measures to seasonal hazards—heatwaves, rainfall, and snow storms—is negligible.

Even now, several parts of India are facing an intense heat wave, and yet, there has been no single people-driven demand for welfare or aid to combat the heat stress in terms of resources. To club the intense heat waves with India’s toxic affinity towards expanding the brown economy, and the slow and low-motivated interest to transition out of fossil-fuel and non-renewable sources of energy makes matters complex.

Justice Srimathy may very well be a part of the small group of people demanding climate action and environmental justice, but does it have the scope to change the current framework? Unless humans can recognise ‘Mother Nature’ as a living being, not much stands to change without awareness of her fragility, with or without a legal status. But, there is hope, always—and the judiciary through Justice Srimathy portrays the beacon of change, for the natural world.

Featured image is of women planting a new saplings as part of a ceremony while their young daughter shows eagerness to help; McKay Savage from London, UK, CC BY 2.0