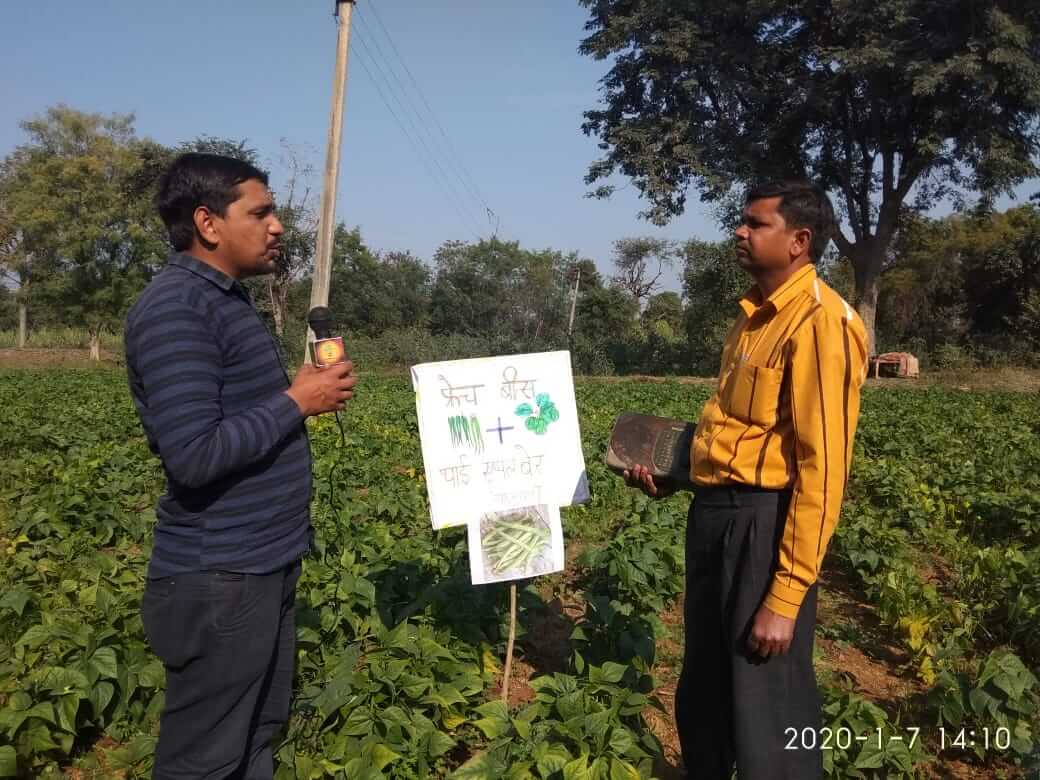 On 25 March, as a preventive step to curb the spread of the Coronavirus, India was put under a complete lockdown. As inter-state public transport came to a halt, migrant labourers chose the only option available to get back home: they began walking.

“Only when lakhs of people who walked back from Delhi-NCR, Haryana and Uttar Pradesh landed at the border did the administration realise how many people actually migrate out of here!” says Manish Samadhiya, a resident of Jhansi, in Central India’s Bundelkhand region. It is one of India’s migration hotspots. This region is unique. Parts of Bundelkhand are spread across Uttar Pradesh and Madhya Pradesh, but it is the common cultural and geographical identity unites it.

Manish continues, “When they arrived back home, we immediately made programs on what services they could avail from the government during this time, the process of quarantining, etc. During the lockdown,  we interviewed doctors on our programs to talk about symptoms and prevention of coronavirus.” The “we” Manish talks about is the team at Radio Bundelkhand, a community radio where Manish works as a senior reporter. An initiative of the NGO Development Alternatives, the radio station has been running in Bundelkhand since 2008.

A Peep into Bundelkhand’s Sensitivities

Based in Orchha, Madhya Pradesh, the Bundelkhand Community Radio is the first such community radio station in the state. Today, it covers 150 villages, reaching out to over 200,000 people who reside in parts of Jhansi and Tikamgarh. Besides the latest COVID-19 updates, the Radio has different weekly segments that cover the themes of women’s health, climate change, and local folk music, amongst others.

“When we started working in this region, we sensed that local concerns of the people needed to be voiced and addressed, in their own language,” Brigadier Pankaj Sinha, Administrator of Development Alternatives-Bundelkhand Operations, tells me. “These concerns were not getting enough space in national and state-level media.”

Of late, the region has been a witness to erratic weather. On average, annual rainfall has dropped by 40% over the last 13 years and a drastic 60% over the last 5 years alone. Droughts have become more common than before.

This water scarcity has been a push factor for many of the 18 million residents of the area, which is one of the reasons why Bundelkhand is a migration hotspot in the country. Between 2001 and 2011, more than a quarter of the population migrated out of the region.

The water scarcity and unpredictable weather in Bundelkhand have directly impacted 60% of the workers who are engaged in agriculture for more than half a year. Vijay Ghosh is one such worker.

Last December was particularly stressful for Ghosh. It rained unexpectedly, just when his neighbours and he planned to plant their wheat crops in their village of Ujyaan Pathan. That was when he called the community radio station to voice his worries. He had been a listener for the last 2 years.

A few days later, he tuned in to ‘Khet Khalihaan’ on  Radio Bundelkhand’s 90.4 FM — the “one-stop-shop” for farmers in the region for reports on agricultural trends. People across the region listened to the woes of his mistimed sowing; a seed expert even recommended alternate wheat crops that could be used to maintain crop productivity. By the harvest season in March, Vijay’s story has turned around.

“We were expecting only about 1400 kg…[but] this year, the harvest has been 2000 kg,” a satisfied Vijay tells me over the phone.

Another program on the Radio Bundelkhand called “Shubhkal”  (a better tomorrow) has become a popular program focussing on climate impacts and how to mitigate and adapt to unseasonal rains and increasing droughts.

The Shubhkal program emerged from a year-long campaign that the Radio carried out in 2010, called “Kaun Banega Shubhkal Leader?” (Who wants to be a Leader for a Better Tomorrow?). The World Bank-supported campaign divided 100 villages into groups, designating each with one of the four themes: agroforestry, rainwater harvesting, organic farming and kitchen gardening. It reached about 15,000 listeners, making it the most popular program on the station.

Radio Reporters broadcasted thematic information for villages to adopt the practices. Weekly experts were bought in to monitor the progress of the farmers, which would earn the farmers points. At the end of the campaign, the highest scorer was announced as a winner and presented with a certificate and ₹10,000 in cash.

“The farmers who were experimenting with agroforestry would call the studio, excited when the trees began bearing fruits!” exclaims Varsha Raikwar, a radio reporter with Radio Bundelkhand. Varsha belongs to a local farmer-family and is the first woman from her family engaged in a non-agricultural job.

“This type of feedback is essential for designing radio programs,” says Manish. He tells me that the reporters make frequent visits to the villages, discuss the problems faced by residents, and align their programming and guests accordingly.

Prakash Kushwaha, a farmer from Nevadi, was the winner of the Shubhkal campaign in 2011. His award-winning practice was an experiment with organic fertilizers made by mixing leaves, soil, cow manure and urine, and jaggery. This helped him shift away from chemical fertilizers like Diammonium phosphate (DAP) which harm the soil in the long-run. Prakash calculates that buying one sack of DAP and Urea (which consists of nitrogen, phosphorus, potassium) used to cost ₹1500 and ₹400, respectively.

But, the organic manure that locals call “amrit mitti”, (literally translating to ‘elixir soil’), is practically free, since all the inputs are available on their own farms, as long as their family owns cattle.

For the past decade, this locally produced ‘elixir soil’ has helped grow Prakash’s organic tomatoes, brinjals, and garlic. Finding a good market to sell such organic produce is often a problem, but Radio Bundelkhand attempts to fill this gap too. It broadcasts information about upcoming and ongoing agricultural fairs in the region.

Lately, Prakash’s family and many around him have begun creating small weirs called ‘medhs’, which regulate and conserve run-off water. This is thanks to the advice on Shubkal about water harvesting. “Radio Bundelkhand tells us that this will increase the groundwater levels,” says Prakash.

A few years ago, Prakash and many other families were on the verge of migrating. Thanks to added water security provided by the medhs, he could rethink his decision.

“It wouldn’t be fair to say that due to the community radio, all migration has stopped,” says Manish. “But people started understanding that efforts like this will have long-term benefits.”

Of late, the Radio has also started a new campaign to encourage small businesses in the region. Similarly designed as the Shubhkal Campaign, this programme also seeks to transform information that they broadcast to help small businesses grow.

Radio?! Does anybody still listen to the radio today?

Radio Bundelkhand’s reporter Varsha laughs as she tells me how she asked this question when the opportunity to work with the community radio station came up. But, even today, radio is a popular option for many in Bundelkhand who march on to their fields every day, with a radio transmitter on the shoulder, tuned into 90.4 FM.

A shorter version of this story was published by OneEarth