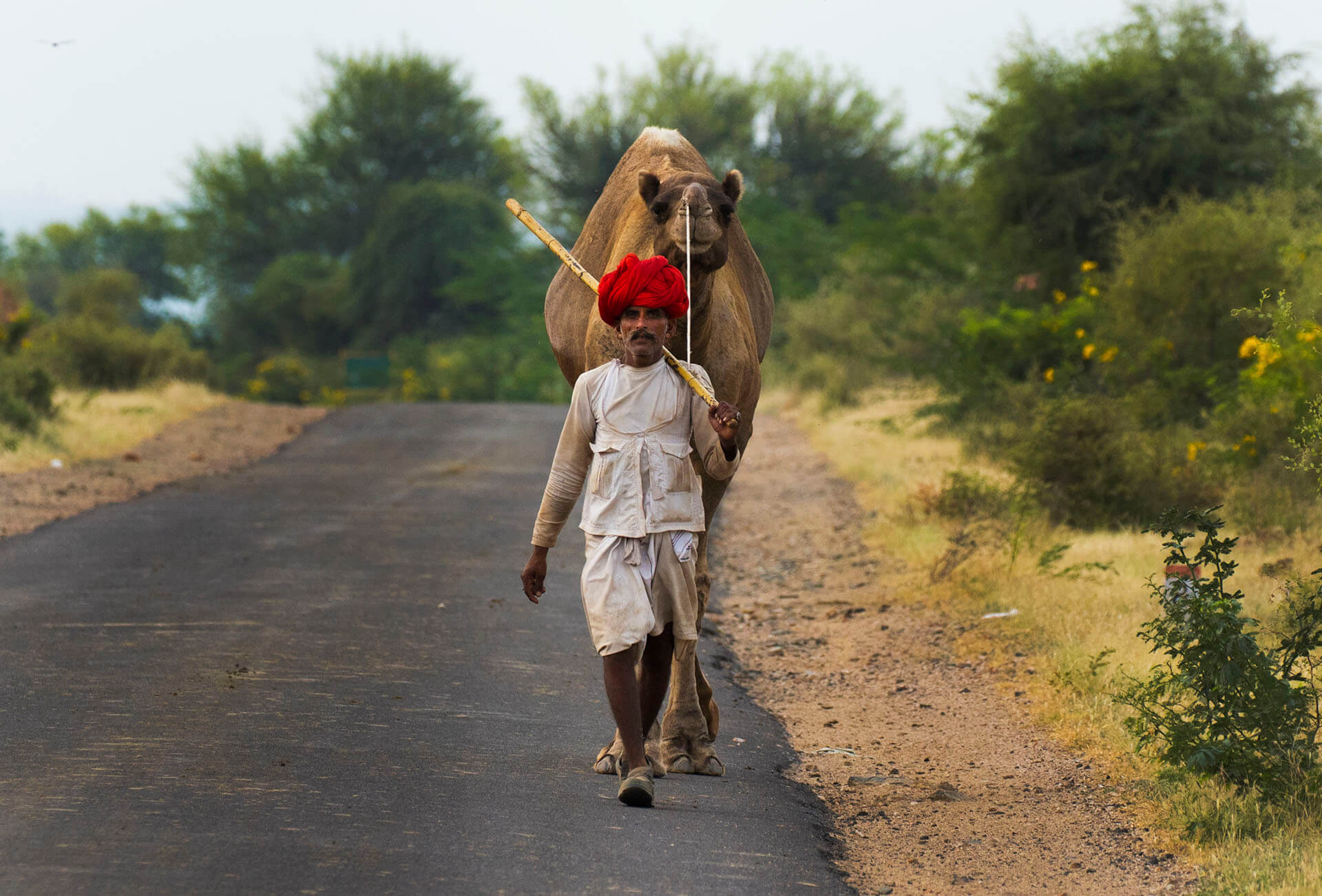 This article is the final instalment of our series on how the COVID-19 pandemic and its associated lockdowns impacted the livelihoods of three Indian transhumant pastoralist communities—the Van Gujjars, the Bakarwals, and the Raikas. Click here for a primer on pastoralism through the pandemic, here for part two on the Van-Gujjar community, and here for part three on the Gujjar-Bakarwals.

Legend has it that the Raikas, a nomadic pastoralist community, were ordained as the guardian of camels by Lord Shiva. Glued to the myths of origin and a sense of attachment and purpose to their livestock, Raikas have practiced livestock rearing, aided by seasonal migration, in the harsh arid and semi-arid climatic regions of West India for centuries. Their way of life has shown remarkable resilience even as the socio-economic-political systems oscillated between monarchy and British colonialism, ultimately transitioning into neoliberal capitalism.

Cracks, however, have begun to appear over the past two decades, which have intensified since the COVID-19 outbreak. Pastoralists in Rajasthan are now considering a sedentary lifestyle devoid of livestock.

“Tourism centred around camel safaris and camel milk products is the main source of income for Rajputs, Muslims and Raikas pastoralists. I was earning ₹5,000 per day during the tourism season in Jaisalmer,” says Sumer Singh Bhati, a seasoned pastoralist who owns a fleet of 300-350 camels. COVID-19 dealt a severe blow to the livelihood of herders like Bhati. “The income from camels over the past year and a half has been nil. There have been no tourists… camel milk could not be transported for sale during the pandemic,” he says. “I am not even able to sell my camels. If it continues like this, there are going to be serious problems for us.”

On top of their dwindling economic prospects through the pandemic, pastoralists in Rajasthan faced hostility from other communities. “We need to take our livestock out to graze every day,” Sumer Bhati continues. “Locals would look at us with suspicion and accuse us of spreading COVID-19. Some refused to give us drinking water.”

A Livelihood Characterized by Environmental Disruptions

Across India, pastoralists operate in environments characterised by low and erratic rainfall. Rajasthan in particular has faced 48 droughts of varied intensity between 1901–2002 and witnessed a 50mm decrease in the average annual rainfall between 1973–2008. The past two decades have also witnessed heightened water scarcity and rainfall variability. The Raikas, who are heavily reliant on reserves of natural resources for their agro-pastoral livelihoods, find themselves on the losing end of these environmental disruptions, compounded by socio-political marginalisation.

“Where is the rainfall? Now, it comes for a few days and then goes away. Earlier, it used to rain for four months,” says a 60-year-old Raika. Another pastoralist adds that “low levels of rain leads to low agricultural productivity. If there is less productivity, there is less fodder and grazing area for our livestock. It’s all interdependent.” The loss of income has been one the three most important challenges identified by the community. The Rajasthan State Action Plan on Climate Change warns that droughts and water scarcity will significantly reduce the ability of livestock to contribute to household wages. “If you can speak to the government, then it must be communicated that the lack of land is a big challenge for us… My fear is that by 2025, there will not even be one hectare where camels can graze,” Sumer Bhati adds.

Villages commonly known as Gauchar and Oran used to provide a safety net in the past, for grazing and water amidst trying conditions. Orans have ponds that serve as water-harvesting structures for the catchment area; some have small spring-like sources of water running through them. These access points to water have now been diverted for other purposes, denying Raikas and their livestock any access. The fate of other rainwater harvesting structures in the villages is also precarious, as many of them have run dry or are captured by the elite.

A Way Of Life Hangs in The Balance

The risk of pastoralism goes above and beyond economic concerns, into the realm of social conflicts and violence. A combination of the shortage of pastureland and water has led to the breakdown of Raikas’ cooperative relationship with farmers, leaving them exposed to the threat of physical violence during periods of seasonal livestock migration. In the past, Raikas’ cattle offered manure to farmers, and the same fields could be used for fodder and water. However, water scarcity has made the presence of Raika communities undesirable and burdensome on what is already limited farm resources. Farmers today are instead opting for chemical fertilisers and mechanical irrigation.

“‘Hey, this land is mine! Take them [the camels] out from here’—is what we hear everywhere we go,” says a 45-year-old pastoralist about how farmers treat them.

The one-humped camel has been the unofficial mascot and a source of pride for Rajasthan. The sturdy mammal has fought for kings as part of cavalry brigades, ploughed the field of farmers, and nourished local communities with its milk during a particularly bad drought in 1937. At its peak in the 1980s, the camel population in the state was upwards of 700,000. By 2015, the number of camels in Rajasthan had declined by 34.7 per cent, from 326,000 to 213,000.

Successive governments haven’t offered much hope. “There used to be a scheme through which we got ₹10,000 rupees a month, but that has also been stopped. There’s no help extended towards camel herders for improving the income,” Sumer Bhati comments. “In 2010, I had about 500 camels. Almost 200 of them have died since then due to disease and old age. We don’t get any support for medicines from the government… we can’t afford to spend ₹500 per injection from our own pockets”.

Reaching a Point of No Return

A number of Raikas’ rituals, customs and traditions involve their livestock. For instance, camels are used for the departure of the groom’s marriage party and entrance at the bride’s house. Similarly, sheep and goats are often given as dowry between communities. Raikas pride themselves as being custodians of the forests; they are known to fight fires, invasive species, and prevent degradation in forests. Additionally, they possess intimate knowledge of the ecological system which has allowed them to survive in this harsh climatic condition.

But the Raikas’ socio-cultural values have undergone changes in the past two decades. Seasonal livestock migration has become associated with backwardness. Regarding giving up seasonal migration, a 40-year-old Raika says, “if you keep rearing livestock, you will not get married because no one will give you their daughter.” Urban migration, especially by youth, has become the norm. “If you took a survey here, today, you would find only old people as herders,” warns Sumer Bhati. “The younger generations aren’t taking [camel herding] up as a livelihood.”

“If tourism and camel forums restart, then our incomes can increase, and the camels can be saved as well,” Bhati says. But before that, efforts can be made to make camel milk widely available and marketed, for these pastoralists’ incomes to increase. “If NGOs and government organisations can come together to increase the demand for camel milk across India [and the world], then it’ll be immensely beneficial for us,” Sumer Singh Bhati adds as a parting comment. It is clear that climate change has exacerbated the vulnerabilities of one of India’s oldest transhumant pastoralists in the Raikas of Rajasthan. If they continue to be sidelined in the current paradigm of development and modernization, COVID-19 could well take them past the point of no return.

“Slow Onset” Climate Hazards Are Upon Us. How Are We Responding to Them?