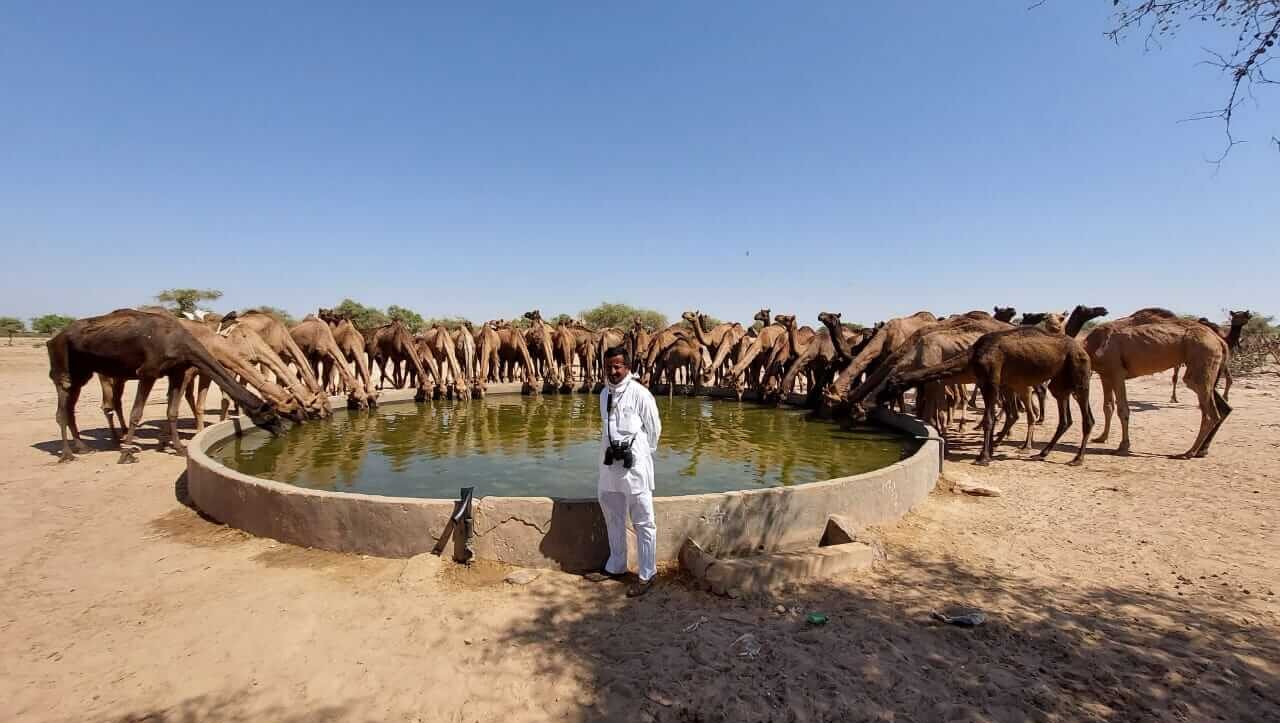 Sumer Singh Bhati’s Whatsapp status is a photograph of a notice published in Rajasthan’s local newspaper. It informs that 12 kilometres of transmission lines are coming up in Fatehgarh, Jaiselmer to support a 180MW solar plant by SBE Renewables Sixteen Private Limited. The lines run close to his village Sanwata, in India’s Thar desert. On the status, Bhati writes, “Public, we need to wake up and decide on this soon.”

The transmission lines are a cause of concern. They will be erected in the common land, or Oran, whose local trees and bushes are fodder for cattle, including the drought-resistant camels. “Now that they are either getting encroached or diverted for large development projects, what will people feed their camels? People have stopped rearing them.” Bhati says.

But Bhati is swimming against the tide. In the last 7 years, when the camel population in India crashed from 400,000 to 250,000 animals—a 37% decline — he began tending to about 400 camels for his latest business: selling camels’ milk.

“Only if camels are economically beneficial will people rear them,” says Bhati, who collects at least 2,000 litres from his camels every day.

Over the past decade, camels have become an unpopular livelihood option for many. Where camel carts were the only means to travel between villages in the desert, buses and jeeps have now replaced them. Instead of camels, tractors now plough fields. Then, a 2015 state policy hit camel herder’s livelihoods immensely; it prohibited the slaughter and export of camels for slaughter from Rajasthan to other states.

“Jaiselmer has the largest population of camels in India, and despite that, the younger generation is not interested in rearing or conserving them,” explains Bhati. “This needs to change.”

Diminishing common grazing lands makes matters worse.“Camels, being big animals, cannot be stall-fed [fed and kept in a stall] at one place, they need daily walks to remain healthy,” says Sumit Dookia, a wildlife biologist and Assistant Professor at a Delhi-based university. “But this is becoming challenging… in Jaisalmer district [where Sanwata is], almost every village’s common land is being converted into wind and solar energy farms”.

For the camel-herding Raika community living in Rajasthan, their culture is on the verge of unravelling. Ilse Kohler-Rollefson is a German scientist who has been working on pastoralism for the past 30 years. “[The Raika community] feel the responsibility for the herds that they have inherited and have become a burden, rather than an asset”, she tells me.

Since 2017, Bhati and a few herders have been waking up at 4 am to milk camels. Once the local sale is done, they transport milk in iceboxes to larger cities like 500 km away to Jaipur, or even 1,000 km away like Mumbai. Studies have shown that apart from diabetic patients, the antioxidants in camel milk can help children with an autism spectrum disorder.

Bhati even underwent training to learn how to make chocolates and ice cream out of camel milk. The business is making Bhati a profit, albeit a marginal one.

“The market for camel milk is very limited,” says Kohler-Rollefson. “There are not as many buyers of milk to meet the supply.” She has also started Camel Charisma, a camel milk dairy in Kumbhalgarh, about 400 km from Bhati’s residence. “Rearing such a large animal for only milk will not have a bright future,” suggests Dookia, pointing towards the need to diversify camel products like wool for a viable business. Camel Charisma has added camel “poop-paper” (which is paper made using camel dung) and camel milk cheese in their product basket.

Camels need to be reared by sustaining them on the natural and bio-diverse vegetation of Rajasthan. “They have to be seen as a part of the landscape and ecosystem. Of course, there are limits to the number of camels that can be kept that way and those should not be overstepped, but I don’t see the danger of that happening for decades,” mentions Kohler-Rollefson.

Protecting the camel is synonymous to protecting its habitat—large, open, desert areas used by villages as commons, but more recently are under the threat of being diverted for large projects, including the transmission lines. Addressing the loss of Orans, then, completes the conservation picture.

Bhati and other volunteers have met and written to the District Collector on multiple occasions, and are also fighting the Oran’s diversion for solar projects in court. He has also been working with the ERDS Foundation, who recently organised a foot march for conservation and protection of this pastureland, also home to the critically endangered Great Indian Bustard. If more were to follow this path, perhaps the desert will see more camels again.