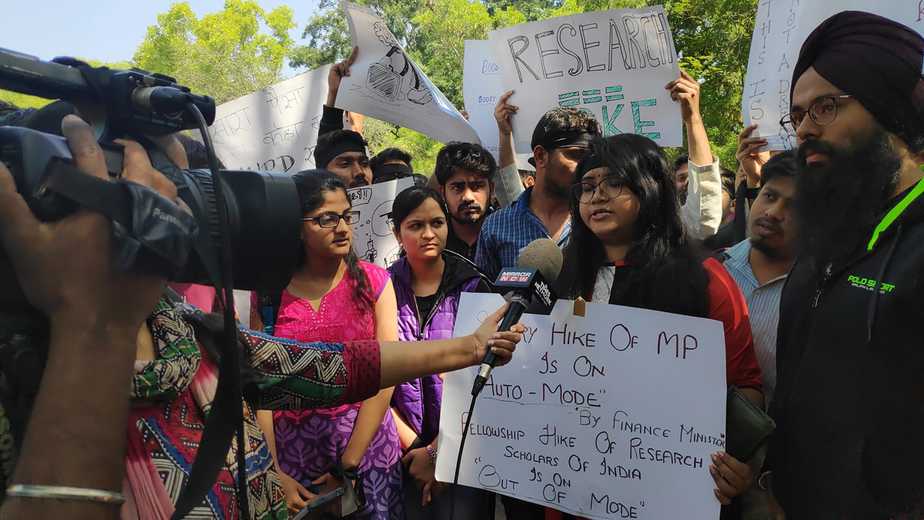 Being a research scholar in India is anything but easy. For instance, earlier this month, the Central University of Kerala was involved in a row over giving incoming PhD students a pre-selected list of topics for research in accordance with ‘national priorities’, and stating that ‘irrelevant research’ would not be permitted. In fact, on the 25th, a member on the university’s board, Meena T Pillai, resigned in protest. Noted academic, Professor Sukanta Chaudhuri started a petition — which has more than 5,000 signatories thus far — to end these restrictions, saying “this proposal will terminally impair the pursuit of knowledge in this country….It will thus be grossly detrimental to the national interest”.

Take also the case of stipends for research scholars. For a long time, scholars from across the country have been demanding a hike, asking for stipends to be doubled; the current amount was not sufficient for scholars to support themselves, let alone their families. Following two meetings on the 24th and 26th of December, 2018, Science and Technology Minister Harsh Vardhan and HRD Minister Prakash Javadekar assured them of a significant hike.

After continued protests, and the arrest of over 2,000 scholars protesting outside the Ministry of Human Resource Development this January, a hike of approximately 24% was announced. This sparked further outrage and fierce criticism; this was the lowest hike since 2006, was the only one over the past five years!

Over the years, India has continued to overlook both, the well-being of research scholars, and the overarching field of research and development (R&D) itself. This shows clearly when one looks at the Bloomberg Innovation Index (2019), which using several measures — R&D expenditure as a percentage of GDP, productivity (R&D intensity), patent activity, concentration of researchers, including postgraduate PhD students engaged in R&D per 1 million people, and concentration of high-tech companies — placed the country at an abysmal rank of 54.

The tepid support — structural, intellectual and financial — provided to scholars has been driving them away for years. Several are moving to other countries, some are switching sectors, and potential scholars are dissuaded from starting a career in research altogether; India is losing intellectual capital and talent.

Our constant inability to enable a flourishing R&D environment begs a deeper study.

How does India Spend on R&D?

The most obvious way to track how a country promotes R&D is through the amount being spent on it. In India, this amount has seen a consistent rise, tripling in a decade from ₹24,117.24 crores in 2004-05 to ₹85,326.10 crores in 2014-15. While that might sound good, it must be noted that the Gross Expenditure on Research and Development (GERD) as a percentage of the GDP has been decreasing and has stagnated around 0.7% over the past few years. In fact, when compared to other BRICS nations, India’s GERD as a percentage of its GDP is the lowest!

Another important aspect to study is the source of expenditure on research; where is the contribution to R&D coming from?

There are two noticeable trends in the graph above. First, one can see that compared to other developing countries, the Indian government contributes to a significant percentage of research funding. But as pointed out earlier, as a percentage of GDP, expenditure on research has stagnated. While the absolute amount of money spent on R&D has been increasing over the years, it isn’t keeping pace with the growth of our economy, proving to be a hindrance for innovation.

Second, in developed countries, businesses and academic institutions contribute the most towards GERD. It’s clear that in India, businesses’ contribution to GERD lags far behind the countries that we claim to be competing with. A Bloomberg report on the top global R&D spenders had only one Indian name in the top 100, Tata Motors. Businesses from China, Japan and the United States dominated the list.

And how do academic institutions come into the picture? Universities in several developed nations receive grants from their governments and funds for specific research projects they take up – several of which are from businesses. One example of this is the industry partnerships the National University of Singapore has established, which help researchers access different kinds of support. So, while one tie-up with Merck, a pharmaceutical company helps fund research, another tie-up with Lilly, also a pharmaceutical company, helps support research by providing access to proprietary information.

In most developed nations, businesses establish long term collaborations with universities, tasking them to find innovative solutions for challenging problems and providing them with funds to aid them. Thus, armed with time, great intellectual capabilities and resources, universities have the capacity to effectively spend on R&D.

Other than sufficient spending, there are some very real challenges that deter one from becoming a research scholar. For instance, a couple of years ago, the Indian government rolled out tax breaks for companies that invested in R&D, ranging from zero customs and excise duty for the purchase of certain equipment for R&D, to tax benefits for capital and operating expenses. However, in 2016, only 1800 companies in the country availed benefits under this scheme, and only 23% of all applications in 2014 and 2015 were accepted. Granted, the government must be sure of who is availing the benefit of this tax break, however, there have been several claims that the screening process can be cumbersome, expensive and painstakingly long, and hence preclude small and medium-sized enterprises from availing benefits.

In February 2018, the government announced the launch of the Prime Minister’s Research Fellowship; it was touted as a way of combating brain drain by financially incentivising PhD courses at certain Indian universities. The fellowship aimed to fund a thousand PhDs, and if that number wasn’t low enough, only 135 students were offered seats. Further, the assumption that this can actually reverse the brain drain pre-supposes that it is at the PhD level where the problem lies. While this is partly true, it completely misses out on the fact that there is a dearth of quality academic jobs and post-doctoral research opportunities in India! And it is because of the abundance of such opportunities, especially in Europe and North America, that scholars choose to go abroad.

Other schemes have also been launched, like the National Higher Education Mission and the Study in India campaign, all attempting to reverse brain drain and to support research. But schemes can only take one so far if first, the funding is lacking, and second, if their implementation is not up to the mark. If programs run to provide a boost to research aren’t taken seriously, how can we expect any improvement?

Further, as pointed out above, the gap between academic institutions and industry is huge in India. A part of this comes from the lack of concentration on application-based research, which has limited the value of research to industries. This has set about a vicious cycle of lesser investment by industries and businesses in research, and thus, lesser output.

Developing an innovative R&D sector is vital to the progress of any organization, university, or nation as a whole. Our efforts need to be focused on incentivising expenditure on R&D, making extant and newer procedures simpler, and building a supportive ecosystem.

Efforts at improving the research ecosystem must be developed keeping research scholars at the heart. Far too often, talented individuals have no choice but to accept offers from universities in other countries that have better facilities, and more importantly, better funding options. By focusing our efforts on improving the condition of the sector, and consequently research at Indian universities, we might be able to retain the talent that is otherwise lost to other countries.

Investing in research is an economic imperative, especially for a developing nation. It promotes innovation and paves the way for development. Research is given very little value in most schooling systems, with most students, especially those in government schools, not crossing paths with research until tertiary education, where it is brushed off by many as mandatory coursework. India has always been a country with a huge technical, academic and scientific talent; it is sad to see the subcontinent wasting its potential. All talk of India competing to be a ‘world superpower’ will always remain just that — talk — if the pursuit of knowledge is sidelined.