High rates of sexual abuse, teenage pregnancies, and HIV-AIDS are some troubling realities of the Indian subcontinent; 53.3% of children in our country are victims of sexual abuse. In the 12-18 age group, one in every two was a victim of sexual abuse (from a survey of almost 46,000 children). Add to this the fact that India’s youth, 15-29 years of age, forms about 25% of the population, but makes up about 31% of the HIV-AIDS burden.

These realities paint a frightful picture of life for our youth and their future. However, they can be addressed, and even tackled through a controversial, yet necessary part of education; sex education (Sex-Ed). Sex-ed not only involves spreading information about sex but also sexually transmitted diseases, practising safe sex, fighting sexual abuse, consent and boundaries. The need to effectively implement widespread sex-ed is urgent, and action must be taken now.

At 243 million, India has the largest adolescent population in the world, and thus their health – sexual, physical and emotional – must be given prime importance. The movement for sex-ed has met with resistance in India, and even though efforts towards incorporating it in schools and conversations with parents have been made, they have borne little fruit. For instance, even though the Adolescent Education Programme (AEP) has been implemented by the Ministry of Human Resource Development, very few schools in India provide adequate, if any, sex-ed. It is not mandatory for schools to provide sex-ed, and in those that do, more often than not, sex-ed is not imparted by trained instructors.

The scope of sex-ed is not limited to educational institutions alone. Parents and guardians are also expected to converse with their children about sex. However, this is a rarity in Indian households, as parents usually do not talk about sex with their children. A 2013 study found that 88% of male students and 58% of female students in Mumbai reportedly received no sex-ed from their parents. They received information from magazines, books, television and pornography; those exposed to explicit content on television or the internet are more likely to be sexually active earlier. This early, rash introduction to a sexually active life comes with several negative implications, which these adolescents find themselves unable to deal with. Dr Shaibya Saldanha, a founder of Enfold, an organization that promotes education on adolescence health and sexuality, says, “In schools, teachers and parents should be the first to receive such education and training, and then the youth. They are among the trusted adults that a child would want to seek help from”.

Perhaps the most pertinent cause for poor sex education in India is that topics of sexual nature are considered distasteful, thus creating a barrier around conversations about it.

Sex education at a school-level has met much apprehension and many adults are uncomfortable with their children being exposed to sexual knowledge due to stigma. This attitude has been reflected time and again by Indian legislators as well; for instance, in 2014, Harsh Vardhan’s statement on his website to ban sex education from schools caused quite a stir. 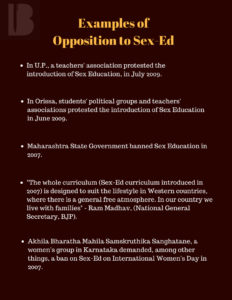 Another highly problematic myth pertaining to sex education in India is that it will only encourage youngsters to engage in sexual activities. In reality, as a study conducted by the World Health Organisation revealed, sex education delays the start of sexual activity and promotes safe sex.

Understanding the Need for Sex-Ed: Going Beyond ‘Sensitivities’

A study by All India Educational and Vocation Guidance Institute found that between 42% to 52% of young students in India admit to not having complete knowledge about sex and sexual health. Another study revealed that almost half of the young population in 11 Indian cities did not know how to protect themselves from STDs. Considering that HIV can be prevented in many cases by using appropriate contraceptives and preventive measures, it is alarming that such large numbers still suffer from this disease. Additionally, a rise in the number of injecting drug users and homosexual men with HIV was also noted. Not only can awareness play a vital part in reducing the transmission of HIV, but also in treating it and acquiring appropriate medical and nutritional support, so that patients with HIV can still lead healthy lives.

Adolescent females often face the brunt of the lack of proper sex-ed. Pregnancy-related deaths and unwanted pregnancies are rampant in India. One out of every six pregnancies in India is borne by mothers between 15-19 years, excluding the large number of pregnancies that are aborted or not reported. Another impact of the inadequate sex-ed is the poor menstrual health of adolescents; a widespread lack of sensitivity and awareness exists in our country around menstruation. Huge taboos exist surrounding it, and menstruating girls and women are often alienated from society and considered ‘impure’.

On the need to effectively implement a widespread life-skills based sexuality education in India’s schools, Dr Saldanha, says, “It should have happened yesterday!”

A good, all-round sex education can help ensure the following:

The onset of adolescence is the most appropriate time for someone to receive sex-ed. This is a time when teenagers are most likely to experiment or indulge in —what could be—risky behaviour, especially if they aren’t fully aware of the consequences their actions may lead to.

A comprehensive education about sexuality is a prerequisite to a healthy youth, capable of making informed choices. Improper sex education or the lack of it entirely can be highly dangerous for the individual in question, and for people the individual interacts with. Awareness alone, possibly through mandatory sex-ed, can greatly improve the condition of a society and reduce the stigma surrounding sex; the taboo must be broken for the sake of our future generations.