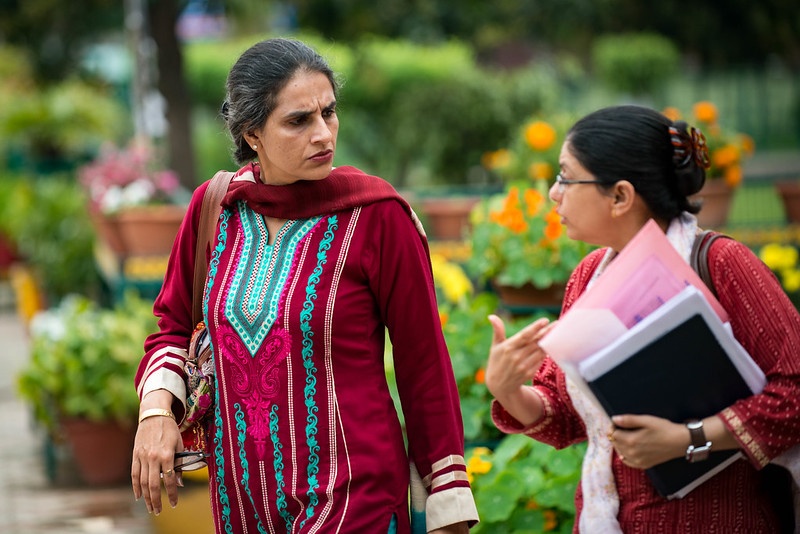 Written by Pragya Roy | This article was originally published on Feminism in India and has been reproduced on The Bastion with full permission.

In recent years, an unprecedented gender parity in educational institutions has been recorded in the country. While the Labor Force Participation Rates (LFPR) of women are historically the lowest, interestingly, in the domain of education and its corresponding institutional measurement of literacy rates, gender gaps are being gradually bridged.

Studies by the All India Survey on Higher Education (AISHE) show that India has progressively moved towards better Gender Parity Index (GPI) in the last seven years. The 2017-18 survey depicts that the “total enrollment in higher education has been estimated to be 36.6 million with 19.2 million boys and 17.4 million girls. Girls constitute 47.6% of the total enrollment”.

However, Scheduled Caste students (men and women) enrolment is 14.4% of the total enrolment, while the Scheduled Tribe category constitutes only 5.2% of the total student enrolment. The obvious concern here is the adverse representation of lower castes and tribes in higher educational institutions, despite the formulation of reservation laws that were implemented five decades back. And with such a scarce representation of SC/ST groups in general, it is quite obvious that the percentage of women from these minority groups is even worse.

The GPI aims to “measure the relative access to education of males and females” across all the Indian states. While we should celebrate this increased visibility of women in educational institutions, what we now need is to investigate the composition of women in these classrooms. Although these numbers provided by the surveys could be a marker of mobility among women, however, such data do not specify the complexities built within them.

If women are increasingly receiving primary, secondary and higher education, why are they absent in the workforce? Has education then simply become a new standard of marriageability for women? How many of these women in classrooms are Dalit or Dalit Muslim women? Once enrolled, what kinds of discrimination do they have to endure? Does their education guarantee them jobs and safeguard them from any exclusionary practices in their workplace? Such questions remain unanswered.

Women from minority caste groups are subjected to discrimination in institutions where the merits of Dalit women are questioned against both men and upper caste women.

The existing policies on reservation to a certain extent have been able to mobilise people belonging to lower caste groups. However, they have also received various criticisms for failing to address social inequalities that are defined through the intersections of caste, gender, and religious identities. These policies are also critiqued on grounds of their inability to empower lower-class people who are economically inferior, and are accused of mobilising the creamy layer of SC/ST caste groups.

You May Also Like: The Bastion Dialogues: Dr. Suraj Yengde

But the realities of caste discrimination do not simply translate to economic inequalities and cannot be solely understood in material terms. These ideas reinforce the neo-liberal understanding of social reality in a capitalist world, where more money could be the solution to every oppression. However, power structures are not confined to class differences but they dominate ideological and political spaces, which may or may not be always defined by materiality.

In a conversation with Shilpa*, a Dalit woman studying in a central university in Kolkata, informed me about her experiences in her school, where she was subjected to casteism when an upper-caste woman denied her to eat her lunch because she belonged to a lower caste. Shilpa went to a convent school where her uniform, her hair, and her body was policed by a patriarchal administration. What was even worse, is when Shilpa enrolled in college, which too policed her body and her clothes, she found out that the same woman was going to be her classmate for the next three years. Shilpa was not very sensitised about her caste position and the kinds of discrimination that come along with it. She also feels that, in a way, she had expected such sorts of casteist behaviour, since she had heard about such instances from other lower caste people.

However, at present, she regrets not being able to confront the accused. Her oppression did not limit itself to lines of solely caste or solely gender. But her experience of oppression was multidimensional, where the intersections between caste and gender affected her both at personal and institutional levels.

The total rule of meritocracy, where merit, solely and exclusively decides the social, political and economic positions of people, irrespective of their individual inadequacies born out of existing hierarchies is a highly problematic system of evaluation.

Amendments to the existing reservation policies invariably attract controversy on merit from anti-reservation groups. Though the concept of ‘merit’ is marked as a move away from nepotism, however, the total rule of meritocracy, where merit, solely and exclusively decides the social, political and economic positions of people, irrespective of their individual inadequacies born out of existing social hierarchies is a highly problematic system of evaluation.

You May Also Like: Public Good, Private Responsibility? The RTE’s EWS Reservation

In such cases, the production of merit comes into question, whereby the differential investment in public schools, healthcare, nutrition etc. reproduce chronic poverty and discrimination for the lower castes. Urban academic spaces and educational institutions often turn into battlegrounds for Dalit women, making them more vulnerable to caste and gender-based hostility and atrocities. Women from minority caste groups are subjected to discrimination in such institutions where their merits are questioned against both men and upper caste women.

Dalit women’s lives are intertwined with the constant management of their caste ‘stigma’, especially in elite institutions. They often face apprehension in revealing their caste identities. Moreover, credible research has shown how capitalist institutions and corporate houses prefer to recruit sophisticated men, who come from backgrounds with rich cultural and economic capital, thereby being largely exclusive of the lower caste women. With the increasing awareness around sexual harassment and the growth of movements associated with it, these corporations prefer not to hire women, fearing accusations and defamation. As organisations get more and more privatised, the private sector devoid of any reservations become increasingly antagonistic for SC/ST women.

Pragya is a Master’s Graduate in Sociology from Jawaharlal Nehru University. She works as the content editor at Feminism In India.

*Names have been changed to protect identity. | Featured image courtesy of the University of the Fraser Valley (CC BY 2.0).