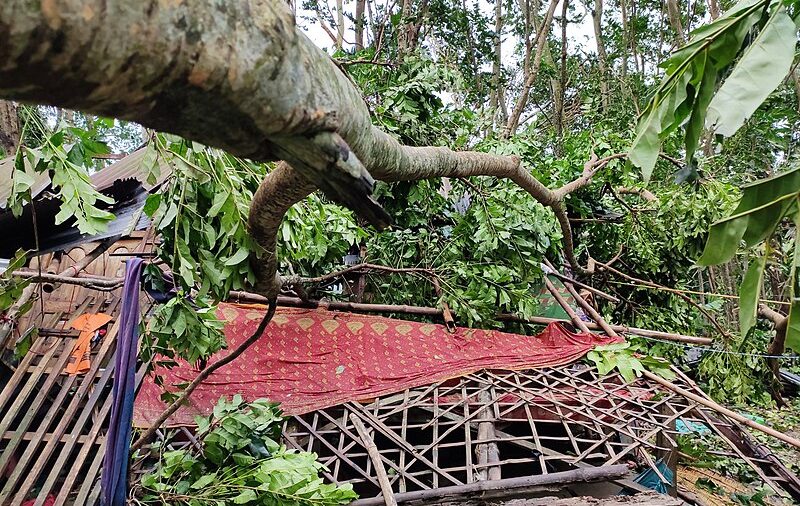 ₹6,048 crores—this is the cost of the total damage caused by cyclone Nisarga when it hit Maharashtra this June. This huge loss isn’t a one-off case. When a major disaster strikes, infrastructure losses are estimated to make up two-thirds of the total public losses. Now, imagine the total costs that the world incurred during 2019’s 228 extreme weather conditions, of which India saw nine; it just feels like maths that I can’t do.

But, someone did the maths. Between 1995 and 2015, disasters have caused between USD 2 to 2.5 trillion in economic losses globally. Yet still, the really worrying events are yet to come. The 2019 Intergovernmental Panel on Climate Change indicated that by 2050, such extreme weather conditions will only increase. If prevention is better than cure, then in the face of such challenges, preparing our infrastructure for extreme weather conditions is the need of the hour.

It was with the same motive of focusing on infrastructure while interacting with Sustainable Development Goals and climate change adaptation, that the Coalition for Disaster Resilient Infrastructure (CDRI) was launched in September of last year. This global coalition with 16 member states so far, including India, works towards building the resilience of new and existing infrastructure systems to climate and disaster risks. While the new coalition gears up with its tasks, some efforts at rebuilding disaster-affected homes in India have already shown the path forward.

Sugandhgiri in Wayanad district of Kerala is vulnerable to floods, landslides, and high-speed winds. When devastating floods hit the state in 2018, the Adivasi communities residing here were amongst many who lost their semi-permanent homes.

“Rural communities are rich in traditional wisdom and have been following flood-resistant construction practices and lifestyles for generations. They have, in fact, learnt from centuries of observation and testing to arrive at amazingly sound solutions. But, as hazard patterns are altering with the changing climate and growing urbanisation, people are moving and settling in high-risk areas,” explains Dr. Anshu Sharma, co-founder of  SEEDS, an organisation that just finished rebuilding permanent houses in Sugandhgiri.

Keeping intact the traditional stilt houses built on raised foundations, SEEDS restructured these homes to withstand local hazards. For the walls, mud blocks made from the waste produced by local laterite stone quarries were used, while sloping roofs were designed in response to the heavy rainfall received in the area. The roofs were made with concrete tiles installed over steel frames and specially fastened edge tiles. A different technique was used to strengthen the mud blocks to make them resilient. They were strengthened with additives through compression, giving them the name “stabilised compressed earth blocks.”

The Indian patent stone and kadappa stone have been used traditionally by these communities in the past, so the same was used for the floors and counters of the new houses. “While keeping traditional systems alive, the intervention also used some modern systems like sewage disposal systems by installing septic tanks at the cluster level. Now, all the houses have toilets and there are arrangements for a regular electric supply to the houses too,” Sharma says. With that, the team has been able to resonate with the motto “build back better”—they have not only restored what was lost, but also created a safer home than before.

Not a Cheap Task

While rebuilding for resilience seems like a great idea, that this is an expensive process cannot be ignored. This high expense has implications right from raising donations for housing programmes, to convincing homeowners to include modern features along with traditional ones to make their houses resilient. SEEDS has found some answers to these challenges. When it comes to convincing homeowners to opt for a traditional yet modern house, community participation has to be prioritised, right from assessments and planning, to execution and monitoring. By doing this, rebuilding becomes a process that is owned by families, ensuring that not just infrastructure is left behind, but also skill sets.

Equal focus and effort also needs to be placed on precautionary, pre-disaster work, as opposed to only reactionary methods, post the disaster. “Good housing and infrastructure should by default mean that they are resilient to hazards that can be anticipated. If we do a good job of constructing buildings and infrastructure well, there will be a minimal need for reactionary work,” Dr. Anshu says.

Before the Disaster Strikes

Build Change, an organisation based in the USA that designs disaster-resistant houses and schools across countries, does just that. It focuses on retrofitting, a cost-effective preventive measure in anticipation of future natural disasters. It then helps to also correct structural inadequacies that may have existed in the previously built infrastructure. In an assessment that Build Change conducted surveying over 2,500 houses in earthquake-prone Haiti, they found that 76% of them were technically retrofittable to be safe from damage during earthquakes. With that, they could prepare their homes to be resilient before a perceived earthquake.

Interestingly, Build Change and other organisations have also been incorporating Artificial Intelligence (AI) into their programs to suggest different ways of retrofitting. In Nepal, the team has developed a smartphone-based app and an image capture that informs rural Nepali owners of whether or not their vulnerable house can be seismically retrofitted. In doing so, the app provides free engineering advice which can otherwise be very expensive for people, and also reduces the time spent by assessment teams visiting each home.

An earthquake heavily damaged the village of Eklephant in Nepal in 2015. Check out our one-of-a-kind virtual reality experience and take a tour of damaged houses, retrofitted houses, and the entire area to see how we are making families safer! https://t.co/ANL9iCpM3j pic.twitter.com/wqsvRKvVrs

There is also a need to map disaster-prone areas where infrastructure should be completely avoided, let alone be built resiliently. This is also reflected in CDRI’s mission of “infrastructure development in accordance with their disaster risk context.” So far, this is a focus that has gained little attention in India.

Take for instance the Landslide Susceptibility Management maps prepared by the Geological Survey of India, which cover 0.42 million sq. km of India’s landslide-prone areas. But, the National Landslide Risk Management Strategy 2019 suggests some piercing gaps in them. It indicates that these maps address anthropogenic intervention in such landslide zones “very casually” by suggesting measures like avoiding further construction, etc. “This makes it difficult for the authorities to ensure strict adherence to land use regulations such as a complete ban on construction activity in a landslide or hazard-prone area,” the document states.  This can have disastrous impacts, especially when it comes to large infrastructure. In Himachal Pradesh, for instance, 97% of the state is estimated to be under serious threat of landslide hazard risks, and yet, more dams are set to come up there.

Some positive developments are taking shape. Just last week, the Indian Meteorology Department mentioned that it will release dynamic and impact-based cyclone warnings which would also warn of potential infrastructural damage if, say, winds of 160km/hour were to hit an area. This will help in mapping resilient infrastructure beforehand.

Creating disaster-resilient infrastructure needs to be centred in construction, right from the siting of infrastructure, to designing projects and procuring material, to monitoring their vulnerability during disasters. And if we need to move towards adapting infrastructure to climate change and the threats it brings with itself, the time is now.